“You’ve got to visit Trafaria Praia, you go onto the boat and then you’re in the depths of the ocean… and it’s all embroidered.”

Nope, it just wasn’t there. I simply couldn’t visualise what an embroidered undersea world would look like. The best I could manage was twee doilies and lace tablecloths wafting about like fan coral. I couldn’t have been more outside of the ball park.

Once you know an embroidered undersea world on a boat exists, you have to visit it. 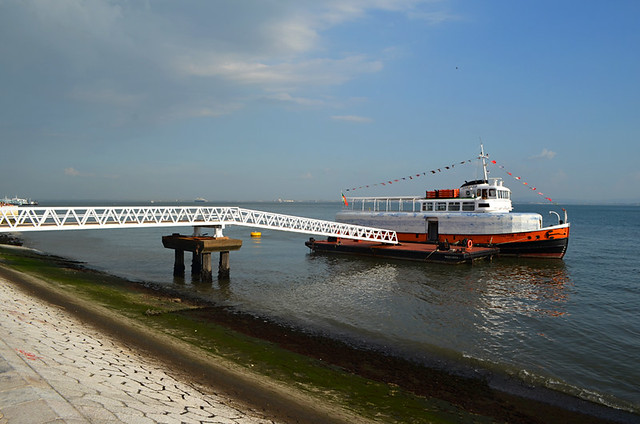 We’d spotted the Trafaria Praia a few days previously, moored in the Tagus near a stylish riverside café where young locals basked in the warm October sunshine.

It’s an odd looking boat. A chunky Tonka toy of a boat that looks as though it could take anything  Mother Nature could throw at it. A little bruiser of a boat whose rough and tough exterior was softened by azulejos, those famous blue Portuguese tiles, depicting a pre-earthquake Lisbon. It was curious, but I’d forgotten all about it until it coincidentally came up in one of those conversation that flowed in all sorts of directions.

It’s moored about five minutes walk from Praça do Comércio. Within half an hour of it being mentioned we stepped from terra firma onto a bobbing flight of a supremely talented artist’s fancy. 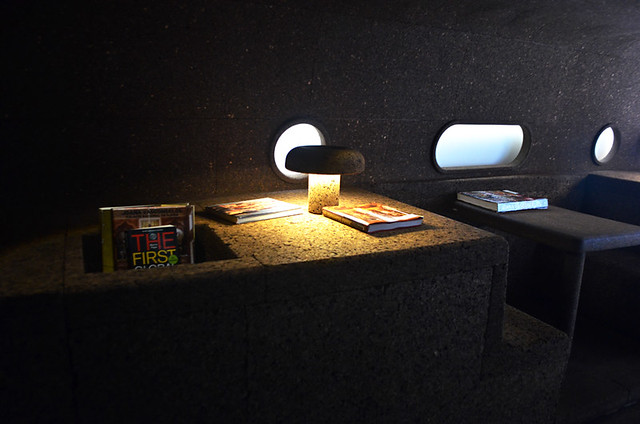 Firstly, everything is covered in cork. Cork walls, cork counters, cork tables and cork seats. It’s a soft, warm and cosy environment. I quite fancied the idea of being caught in rough seas in the Trafaria Praia, imagining that bouncing off the walls would be just like messing about in a inflatable castle.

The German-built boat was formerly a ferry. Decommissioned from service in 2011, it was destined for boats’ equivalent of the knacker’s yard until Portuguese artist Joana Vasconcelos cast her spell over it and transformed it from an ugly duckling into an innovative art piece for the 55th Venice Biennale art festival.

A few books illustrating Joana’s work lie on cork tables near the entrance. They’re worth taking a look at as her creations are witty, inventive in the extreme and quite beautiful. They draw you into a magical world that leaves you in awe of such a creative mind.

And then there’s the undersea bit. 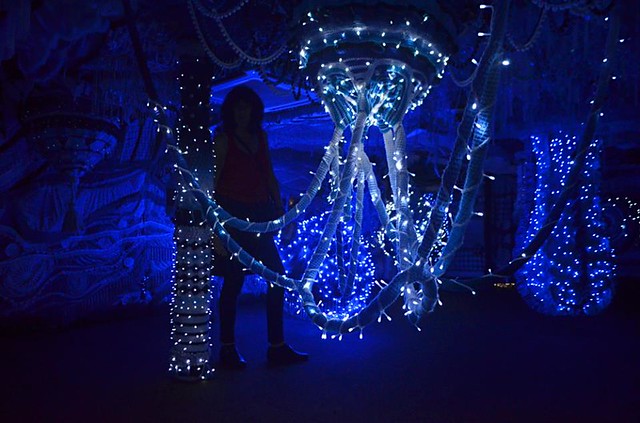 We stepped from the cocoon of cork into the cuddly depths of the ocean.

Describing it as embroidery, crochet, lace work… whatever, just doesn’t do it justice. It doesn’t prepare for what Joana Vasconcelos’ dreamy undersea world is actually like. It’s soft and stunning and serene and absolutely exquisite in a slightly trippy way. I was glad I hadn’t taken up the shifty looking guy’s whispered offer of ‘hashish?’ in the praça earlier. Even without it, I think I actually uttered ‘oh wow, man’.

We were all alone in a wondrous womb. Sea blue lighting faded and brightened like muted sunlight vainly attempting to illuminate the secretive depths. A soft octopus dominated a room filled with mushroom-shaped, knitted brain corals and woolly anemones protruding from the walls. It was Avatar meets Donnie Darko and was quite the most surprising and enchanting art installation we’d seen since the Carrières de Lumières in Les Baux-de-Provence. 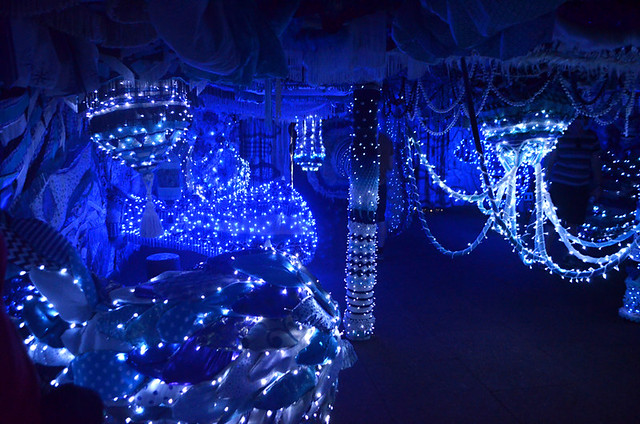 Trafaria Praia is a reminder there is still magic in the world and it is sometimes found in the most unexpected of places.

Fact File: Trafaria Praia is open for visits between 10am and 8pm from Tuesday to Sunday, cost €6. You can also take a river cruise on the magic little boat at 11am, 3pm and 6pm. The voyage lasts an hour and costs €18.