There comes a point on longish hiking routes when your body, or common sense, tells you it’s time to hit the pause button, to park your bum for a short while to rest legs and back. Or maybe it’s just that it’s time to stop for lunch.

The problem we regularly face is that we don’t just want to stop and flop at any old point. We want somewhere which is a) a pleasant spot with a decent view and b) where there is something to sit on that is derrière friendly. It’s not a lot to ask is it? 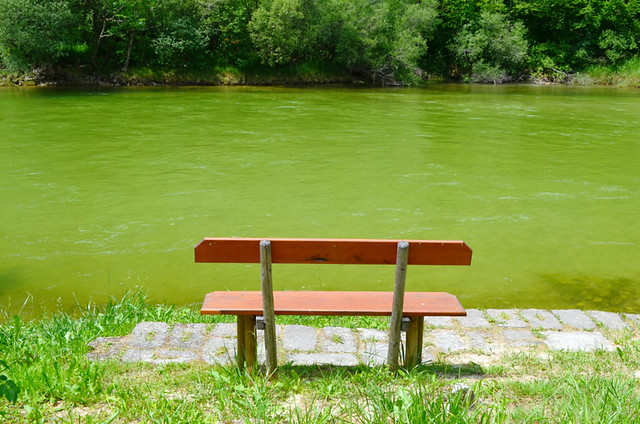 There have been far too many occasions to mention where we’ve walked on, and walked on – just a few hundred metres more – seeking somewhere that comes close to fitting the bill whilst watching time slip by, the sun drop lower, and stomach rumbles grow louder. That’s the nature of nature I guess; the countryside hasn’t been designed so there are convenient resting points with stunning views at regular intervals.

Most of the time we make do with a flat section of earth, a dry and smooth sloping bank, or a flat rock. Rarely do we sit on logs. Ants and other insects get first dibs at those.

Hitting the jackpot though is when there’s been human intervention, and wonderful souls have erected a bench, or makeshift seat beside the path. Some countries are better than others when it comes to providing benches for hikers .

The benchmark in Austria 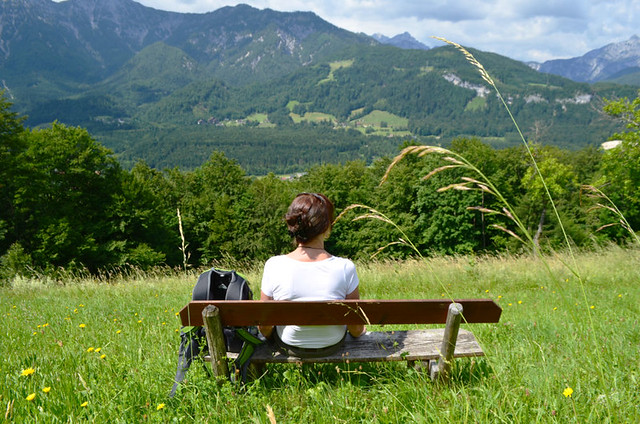 Whenever I think of sitting down on the job, the first image that bounces into my mind is a route to Ewige Wand in Bad Goisern, Austria. It was a bench in the middle of a sloping meadow which had views across the flower-filled pasture to the valley below and saw-toothed mountains beyond. We weren’t tired and it wasn’t lunchtime, but it was too idyllic a spot to pass by. The all-round infrastructure in Austria and Germany when it comes to hiking is as good as we’ve experienced anywhere.

The benchmark in Spain 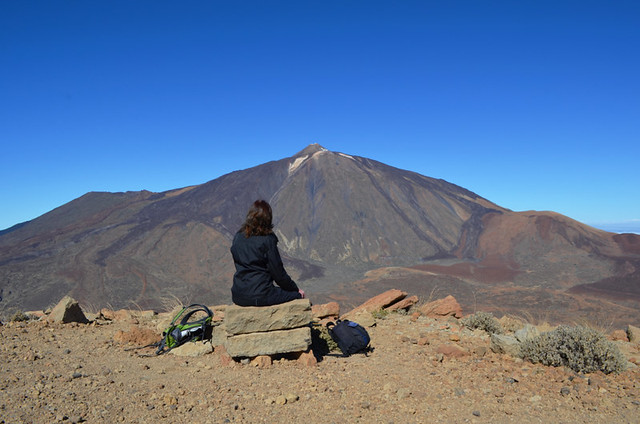 Spain’s not bad when it comes to providing seating for hikers. Zona Recreativas (picnic zones) are common in the western Canary Islands. Whilst many of their users drive to them, laden down with banquet-sized spreads of food, they’re usually also on hiking trails. Hitting one of these at the right time is like the hiker’s equivalent of dining in a posh restaurant – you get a table, chairs, water, and toilet facilities. However, the Canarian bench which has etched itself most in my mind is at the summit of Montaña Guajara on Tenerife. The stone throne there lords it above the vast volcanic crater of Teide National Park, with Mount Teide adding a stunner of a centrepiece to the view.

The benchmark in Portugal 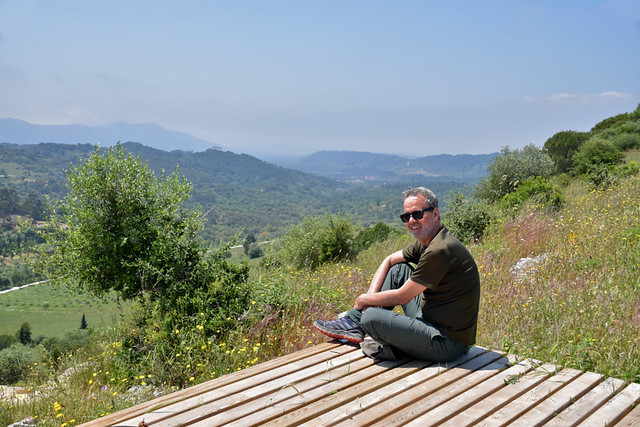 Our experience of well-maintained hiking routes in Portugal has been mixed. Either they’re decently signposted, or there are few waymarks at all. As for benches …
The Caminho de Santiago has been one of the few routes where some form of seating has been commonplace, consisting of little pilgrims’ rest areas, some even with jars of sweets. Usually on northern Portuguese routes we end up dangling our legs off medieval stone bridges, which is no hardship. One exception to the lack of seating is a favourite route of ours along a ridge peppered with old windmills in Arrábida Natural Park. There are wooden platforms at various intervals, positioned for optimum views into the valleys and folds of the park. These are ideal for spreading your gear out, doubling as a table, or even using as a makeshift bed in which to lie back and simply stare up at the cloud formations … if there are any clouds.

The benchmark in France 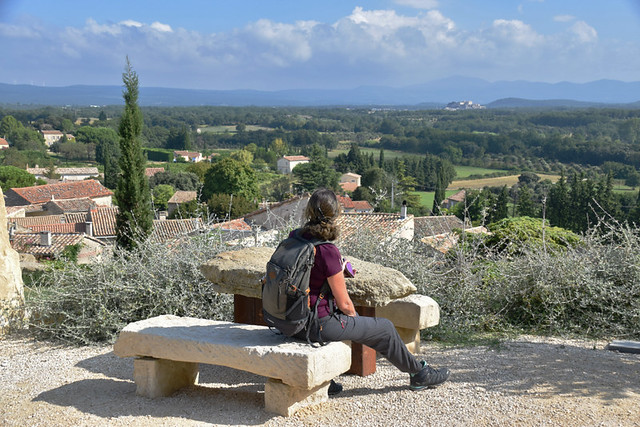 When I think of sitting down on any routes in France’s Provence region, it’s usually at a point where we’ve reached a village perché or arrived at a landmark such as a lone church. The routes we’ve walked in France have been tended to be long meanders through a cliché of a Provençal landscape – fields of sunflowers, gorgeous villages, rows of vines etc. There’s never been long stretches where there hasn’t been somewhere dreamy to drop. Standouts have been a nymph’s glade beside an old priory cloaked by a forest, and at La Tour de Chamaret, a 12th century tower which, from a distance, looks like a finger pointing at the sky. From benches at its base we could trace our route backwards and forwards whilst munching on runny cheese and warm baguettes.

The benchmark in Greece 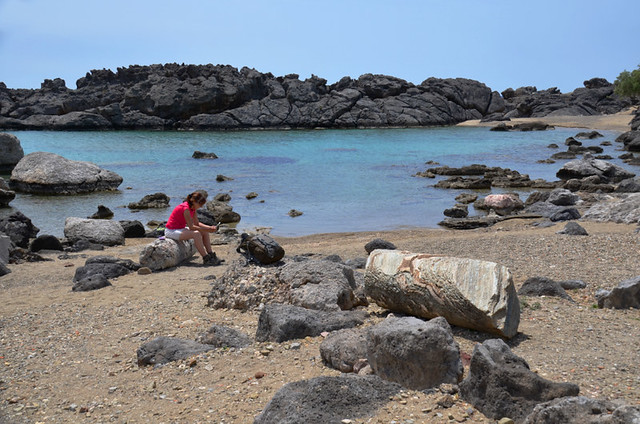 Then there’s Greece and Crete with its intermittent waymarks and confusing routes (that’s if you haven’t planned thoroughly first or don’t have directions to follow). I can’t remember finding any bespoke seating areas on the routes we walked in the west of Crete. But in Greece it doesn’t matter quite the same as in some other countries. There always seems to be somewhere comfortable, scenic, and occasionally historic to plonk down on. Where else would your pew consist of ancient Grecian pillars strewn across a beach miles from anywhere? Worn smooth by the passage of time and the sea, one made for a soothingly smooth surface to while away lunch beside a twinkling Mediterranean.

And finally my homeland, Scotland, and the best bench of all to nestle onto – one in a pub. The wettest I’ve ever been on a hike was walking part of the West Highland Way near Crianlarich. Every single stitch of clothing was sodden, even gear bought for extreme conditions in Chile couldn’t repel the weather. It was the dreichest of September days, the driving rain and Highland mist adding an extra dose of atmosphere to hills we could barely see – not the sort of day to sit down anywhere … until we arrived at the Drover’s Inn, a tavern which has been a sanctuary for mud-splattered travellers for 300 years. It is hard to beat bonhomie, booze and a roaring fire when you’re a squishy mess.