We’d crossed gorges, been questioned by the police and braved waterfalls to walk from Austria to Germany and one thing was stopping us from reaching our destination. We couldn’t work the ticket machine beside the sole platform that made up the train station which would take us on the final leg to Grainau underneath the Zugspitze.

There were a couple of local cyclists on hand to help as the train chugged into view in the distance. They couldn’t work it either.

Ticket-less we jumped on the train like a pair of reluctant hobos bumming a ride to the next destination along the line.

The route had taken us most of the day and by the time we reached our guest house, the Hotel Bergland, we were too late for dinner. Germany and Austria’s early dinner times don’t always fit seamlessly with long walks. 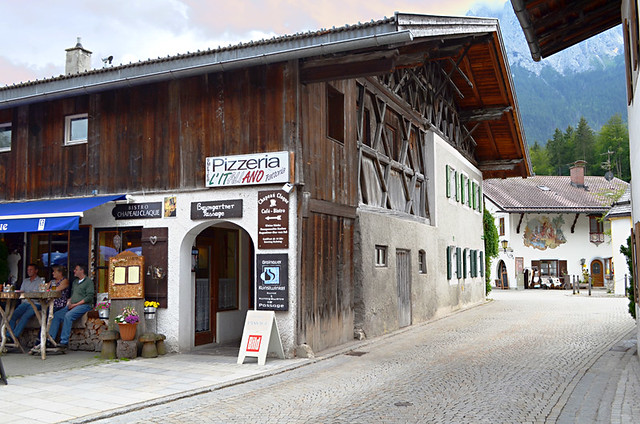 It wasn’t a problem. The pretty little square at Unterer Dorfplatz in Unter Grainau had a couple of cosy looking little restaurants with leafy courtyards and fuzzily warm interiors. After a week of hearty Austrian cuisine, we gave trying the local fare a miss in favour of pizzas at L’Italiano. They were good pizzas and the trattoria had a buzzing atmosphere, a refuge for those who don’t want to eat dinner in the late afternoon.

Rested and fuelled, next day we were able to explore Grainau and its charms in full. The dominating peaks which lend Wagner-esque drama to the town had their impact deflated by low dense cloud. 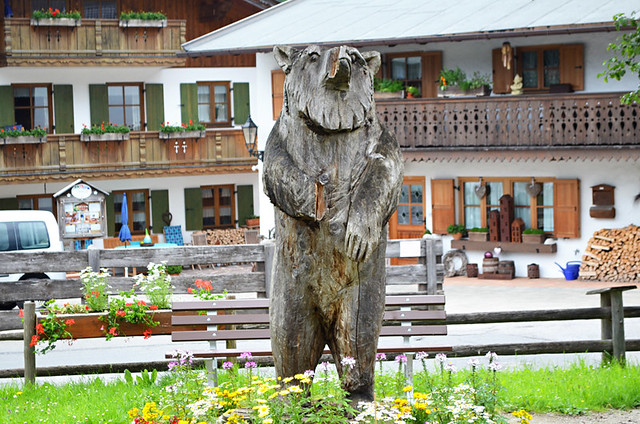 Our route took us through woodlands filled with woodpeckers and past a village pond (with ducks of course). After the pond it swung through the centre of the upper town, Grainau being a town of two halves, and past the Baroque, onion-domed 18th century St John the Baptist Church and a wooden carving of the Granau Bear which had seen better days. 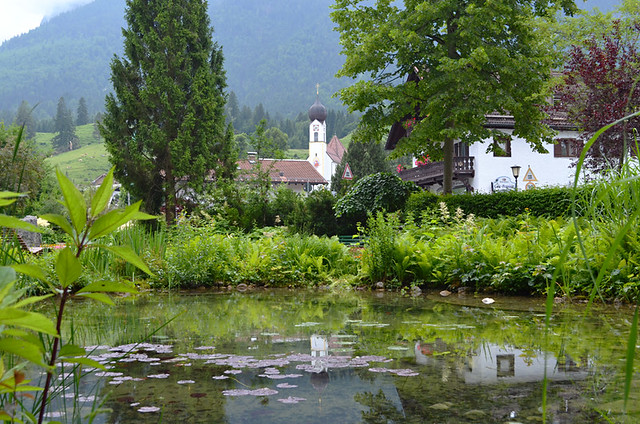 Grainau is a pretty German town, an aesthetic mix of rustic houses,with typically sloping roofs and neat wood piles and wooden implements decorating their façades interspersed with small squares, leafy woodlands and colourful gardens. From the bear square an arch led through one of these gardens before it left the town altogether to delve into the forest in the direction of Badersee lake. 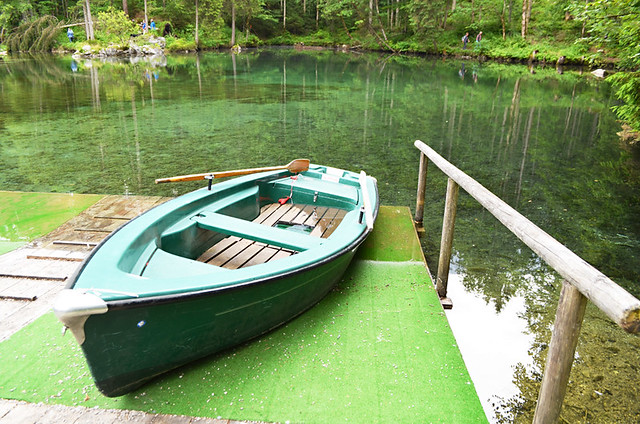 One bank of Badersee is sanitised by the presence of a  hotel, but most of it feels rather wild and raw. Under the surface of its clear emerald water, shoals of trout flitted in and out of the pale brown carcasses of fallen branches and tree trunks. In the centre of the lake a lone tree sits on a small island. It was difficult to see beneath the water at that point. An information board beside the hotel told us a mermaid (statue) lived at the bottom of the lake. My money was she hugged the shallow depths in the water beside the little island. 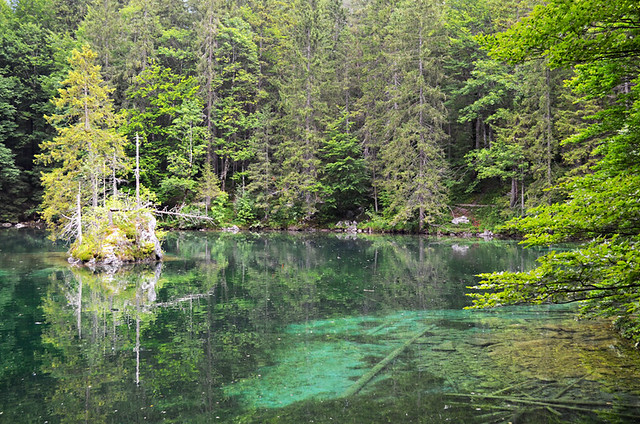 Instead of returning to the town we followed the Höhenrain-Panoramaweg into the hills to the north of the Grainau. It’s a more gentle route than venturing into the cloud shrouded mountains to the south. The path meanders through woodlands and across meadows, with occasional little huts and a giant’s bench offering what, on a cloudless day, must be some seriously good views. At one we were distracted from the views by someone attempting to tightrope walk between two trees… as you do. 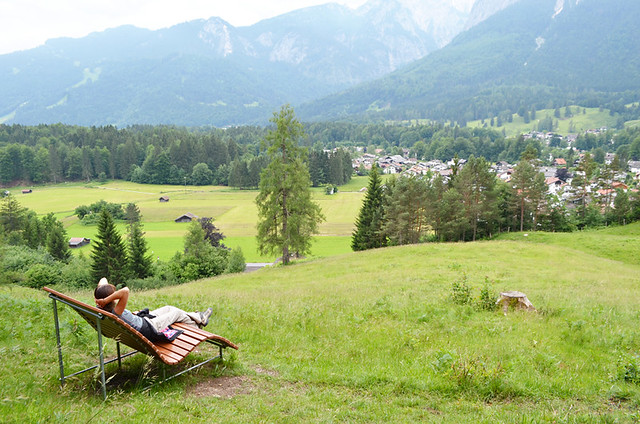 Our path descended to the valley floor before curving back to Grainau. We took time out explore an overgrown park, the Huber. It’s a delightfully unspoilt woodland with oak, beech, larch and maple trees and the Krepbach stream. A little wooden house with a small swimming pool sits atop a mossy mound. There wasn’t another soul in the place. It felt forgotten, abandoned. 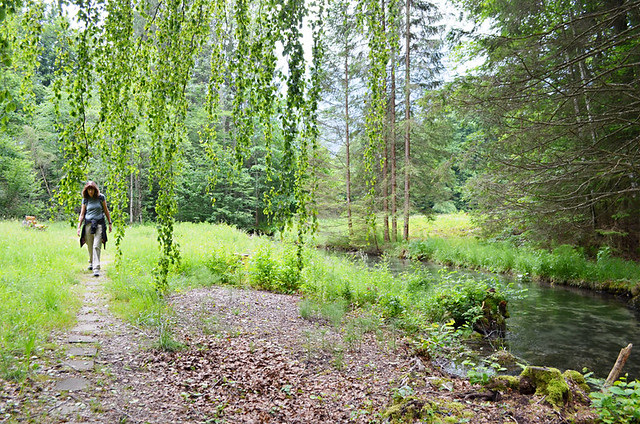 The final stretch of the path returned us to Unter Grainau, where we were welcomed by a jolly jester fresco, in time for a late lunch. This time we chose the friendly courtyard of Chapeau Claque where a German woman did a fantastically impressive job of keeping everyone fed and watered as well as potting plants between taking orders and serving food. 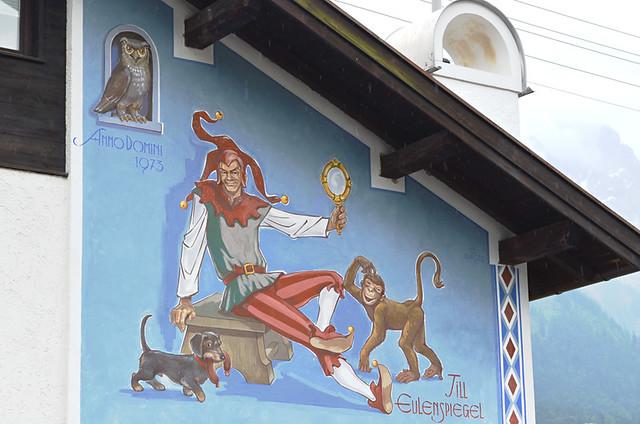 We ordered chilli con carne and a baked potato with cream cheese. Once again it wasn’t local fare, but both were tasty rewards for our exertions, hitting the spot exactly. 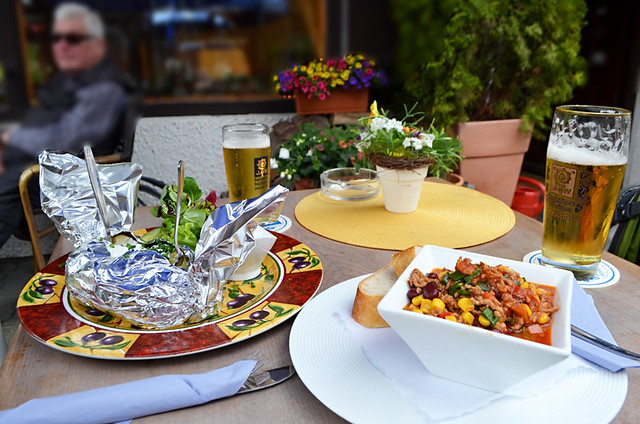 And anyway, the accompanying Augustiner beer was German as was the hale and hearty fare served to us during dinner in our hotel… a short couple of hours later.