It was our first trip to Austria. 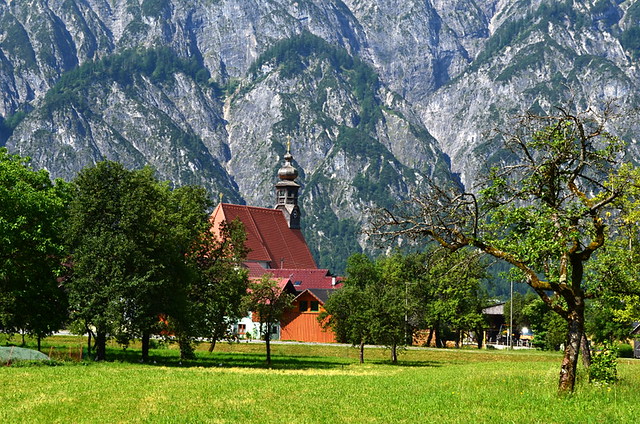 Although the landscape was familiar in a chocolate box sort of way, we didn’t know the foibles of its paths or how its signposting worked. We’d set off from the Agathawirt Hotel in Bad Goisern to cross the meadows at the base of the Dachstein Mountains and had barely been on the trail for 10 minutes when we reached a junction of paths. The path we should be following, the one that went straight ahead to climb into the forest, appeared to fizzle out at houses at the back of the meadow. Over and back we wandered, trying each of the other paths to see if any deviated into the woods, but none of them did. 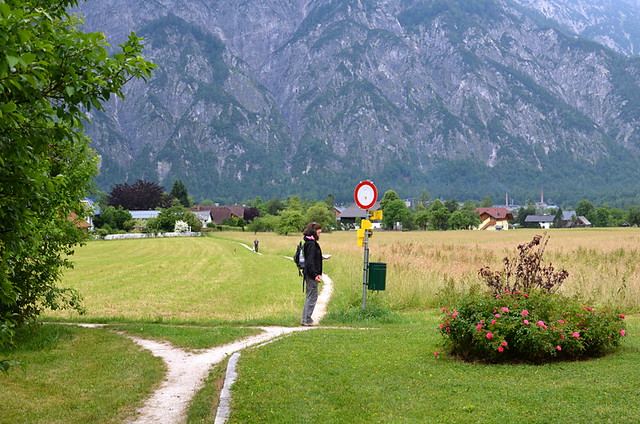 A woman had been silently watching us from behind the hedges of her manicured garden and finally called us over. The path, it seemed, didn’t end at her garden but ran straight across her lawn, alongside her rose bed and then into the woods by a series of rustic steps. With grateful thanks we finally got on track, muttering about being behind schedule and the casual nature of Austrian path making.

Having climbed into the dense forest, we began to wind our way along a flat, narrow path where dappled sunlight fell in light showers and seductive glimpses of the rolling valley far below broke through the trees.

Suddenly the silence was shattered by the thunder of hooves and the cracks of a thousand tiny branches snapping as a large stag emerged at full speed from the forest, leapt across the path in a shaft of brilliant sunlight just feet ahead of us, and disappeared into the forest on the other side, leaving us standing wide-eyed, and a swirling column of leaves dancing in its wake. It happened so quickly that had either one of us been on our own we might have doubted the evidence of our own eyes.

It was just a stag; just a magnificent, antlered stag; its single leap graceful and effortlessly powerful; the muscles in its hindquarters and the beauty of its face caught in a blinding shaft of sunlight, forever emblazoned on the retinas of our memories. It was just a travel moment.

Riding the Galle to Bentota Bus

80,000 people live in Galle and most of them appeared to be at the bus station. The level of commotion and noise gave the impression that some major incident had just occurred […] […]