On the day we were due to visit the instagrammed-to-death jewel in Slovenia’s scenic crown the forecast was for a dull and wet day… and I didn’t care.

I didn’t care for two reasons. One was the forecast for most of the time we were due to be in Slovenia had been for dull and wet days, and there had been a couple of those. But mostly we’d enjoyed warm and sunny weather. We were coming to the end of our trip and I had a memory stick full of images I was more than happy with. We got lucky with the weather. If that luck had run out, so be it. And anyway, everyone who’s set foot in Slovenia has photos of Lake Bled, what is there to add? As Veronika, a travel hungry Slovenian, had said to us at one point. “Everyone who comes to Slovenia goes to Lake Bled and Ljubljana. When I travel I don’t want to go to the same places everybody else goes to.” 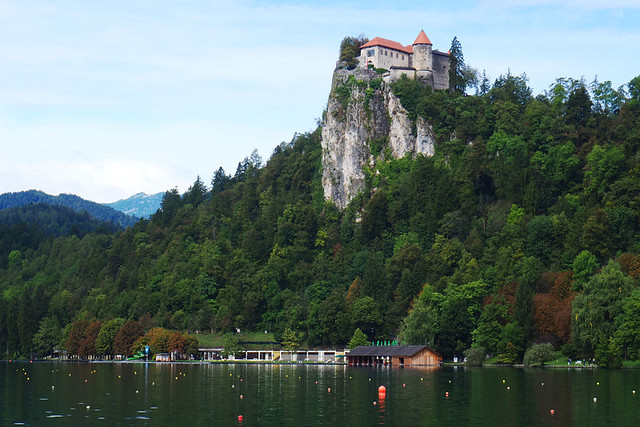 I take her point, but we still really wanted to go to Lake Bled whatever the weather was doing. We might prefer to explore off the beaten track places, but we also want to see the travel ‘classics’ for ourselves. From the multitudinous photos we’d seen of it, Lake Bled looked like a destination that deserved to be visited. However, as well as dreich weather we expected kitsch, and we expected crowds of other tourists.

This is what we found.

Firstly, somebody forgot to tell M. Nature she was supposed to be crying her eyes out. She must have exhausted her supply of water the previous day when it had monsooned it down relentlessly. Not only was it dry, there were patches of blue… big patches of blue. Mr Lucky walked by our sides yet again. 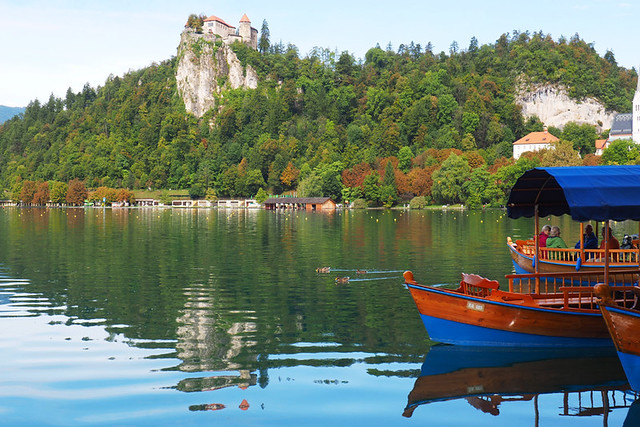 The bus dropped us at the eastern end of the lake, the part which looks most resorty. Even there it wasn’t quite as bustling with tourists as I’d expected. There were a couple of excursion groups (boo, hiss) but overall it was generally quite low key.

As we were basically there just to take a gander at the Slovenian show-piece, we didn’t have time to visit Medieval Bled Castle. Perched on a rocky outcrop above the eastern end of the lake it’s a sight worth visiting Lake Bled for in itself, even though the island at the opposite end tends to be the darling of photographers. Neither did we have time to jump in a flat-bottomed Pletna boat, a variation of which has been transporting travellers since the sixteenth century. What we did have time for was a circumnavigation of Lake Bled. At just over 6km it was something we could notch up in the morning we had available and, anyway, walking is our preferred way of getting a feel for a place. 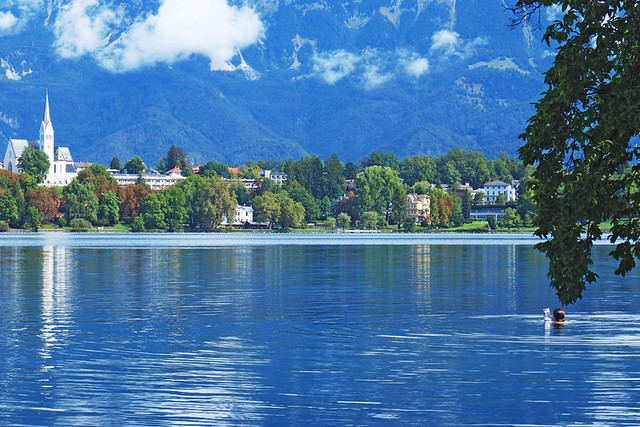 The town at the eastern end of the lake isn’t very big, it didn’t take long to break free of what urbanisation exists. Very quickly the natural and historic scenery takes over, and what glorious scenery it is. Bled Castle sits nobly on its perch; the bushy forest, just taking on some coppery autumn hues in early September, sweeps down to the water’s edge; the mirror surface of the olive water hypnotises; and the serrated peaks of the Julian Alps add the most dramatic backdrop to what is already a fairy tale landscape.

We were nowhere near the most photographed feature, the island, and yet it was abundantly clear reports of Lake Bled’s beauty had not been exaggerated. 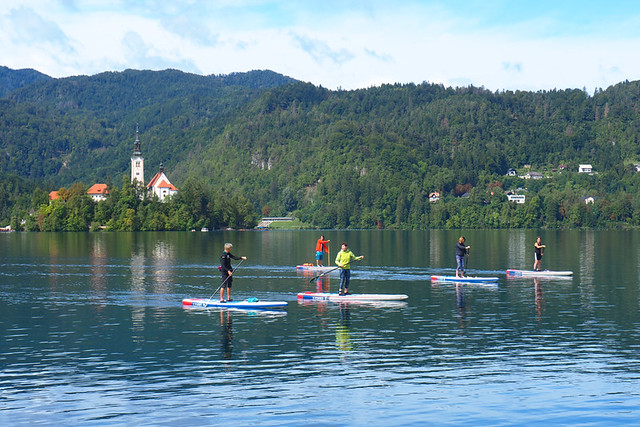 With every step the already sparse crowds thinned out more till there were only a handful of other strollers, no different than what you’d find on any averagely pretty lake. The overall vibe matched the relaxed pace of our fellow strollers – a family struggling with the oars of a rowing boat, a bather taking selfies in the water, a small group SUP-ing their way across the surface, mute swans basking on the shoreline.

By the time we reached a wooden walkway skirting the treeline at Lake Bled’s western end the surroundings felt decidedly rural; a spot where people enjoy a selection of outdoor activities – rowing, canoeing, swimming. Walking the southern edge of the lake to get to the spot where you can bag that essential Bled Island shot – the most stunning frame is looking east – is the long way around, something which presumably means fewer people on the path. Even then, our shorter return route was hardly what you’d call crowded. 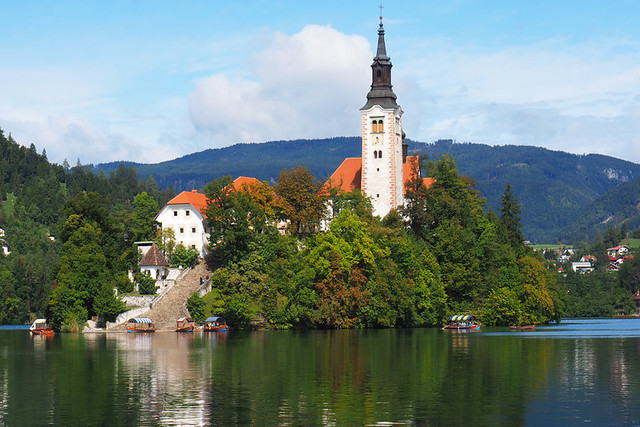 Lake Bled wasn’t anything like as kitsch or as crowded as we’d expected. It does look just as good as even the most stylised of images promise. Maybe, just maybe, there was the feeling of being already familiar with it because at the very mention of Slovenia, it’s an image of Lake Bled which invariably pops up in the mind. But that’s a minor quibble. I’m glad we got to see it for ourselves… and on a nice day despite what I said earlier. 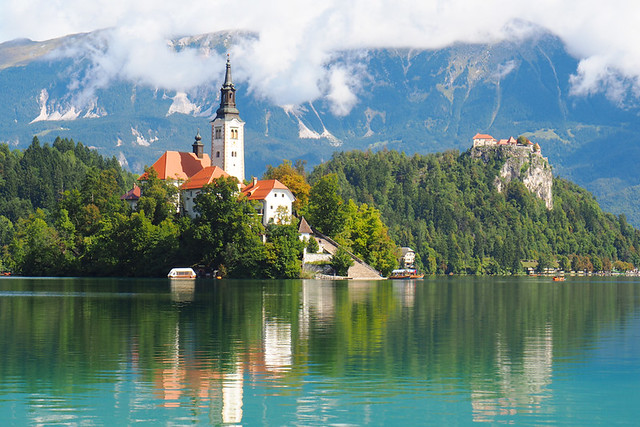 I mentioned at the start there were two reasons I wasn’t going to beat myself up about it if the weather wasn’t good. The second reason was we had already seen other exceptionally beautiful parts of Slovenia before we arrived at Lake Bled. One in particular we hadn’t known about before this trip; we certainly hadn’t seen Instagram images of it before. It had blown us away; a quite special and completely unexpected part of Europe. And we got to enjoy it on a gorgeous sunny day.

But where and what it was is for another day.