When we put together walking routes there are certain ingredients which make a trail memorable. These include scenery with the impact of an uppercut, curios along the way (the odder the better) and, vitally important, a homely hostel in which to raise a glass to an inspirational walk and then undo all the good walking work by gorging on local nosh. If there’s no homely hostel, then there has to be a picturesque spot with something flat to sit on at least.

On long walks, taking time out for lunch isn’t always practical and on these occasions we have to make do with a picnic. I love al fresco dining but if I never see another gum-shredding baguette filled with ham and cheese again, it’ll still be a day too soon. There must be a European wide rural hotel guidebook which states ‘if a guest asks for a picnic, it must include a ham and cheese baguette.’ Thankfully, there are exceptions to this rule. 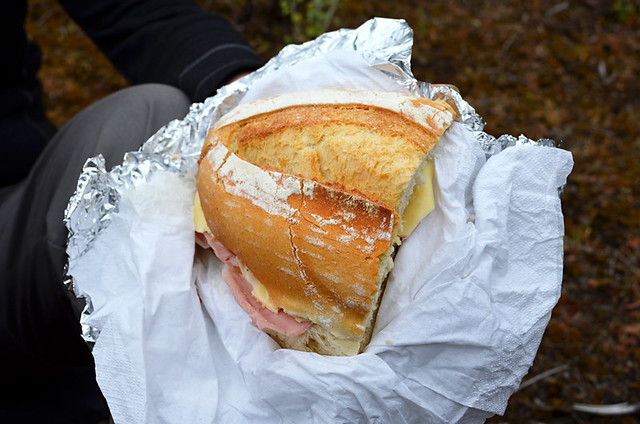 These are some places where we’ve enjoyed some tasty lunches on the trail. 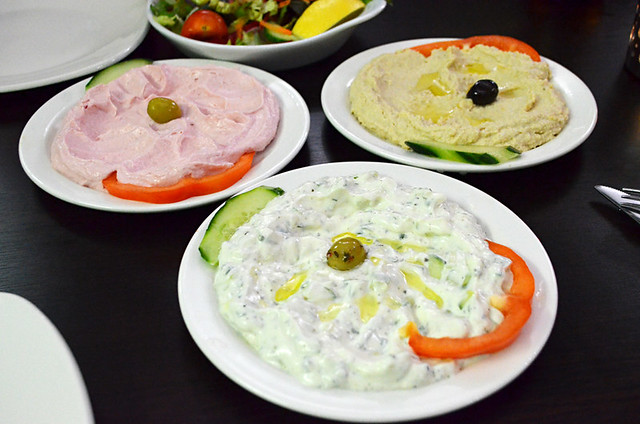 Hardly hardcore walking, but the trek up the Kali Strata from Symi Town on the Greek sland of Symi to head to one of the island’s many dream beaches can work up a sweat and a thirst. Greek tavernas remain my favourite establishments to while away the time drinking retsina and munching on mezes. The Greek heat, unbelievably turquoise sea, heady aroma of honeysuckle and wild herbs, creamy dips and sweet wine is an intoxicating mix (and not just because of the retsina). These aren’t lunches to be taken mid-walk. Thankfully you can catch a water taxi back to Symi Town. 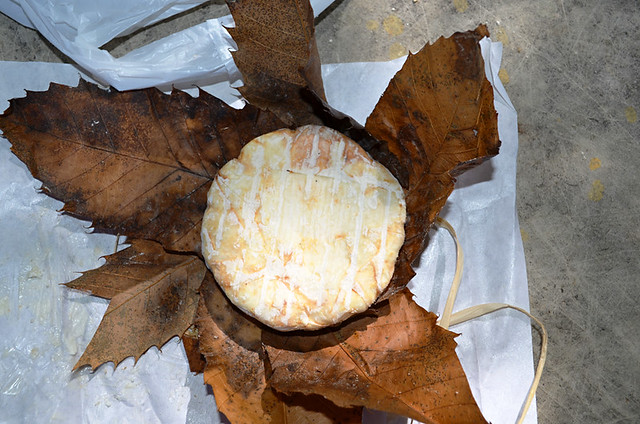 Sure there are plenty of quaint bistros serving food so good it can elicit involuntary moans of pleasure. But one of the best mid-walk lunches I’ve enjoyed was at a picnic table beside a stream near the moss covered ruins of the Prieuré de Carluc near Rellaine. It was a simple lunch consisting of chunky fresh bread and ripe Banon cheese, melted by the sun’s rays. Simple, but as sweet as the fresh spring water gurgling in the brook beside our table. 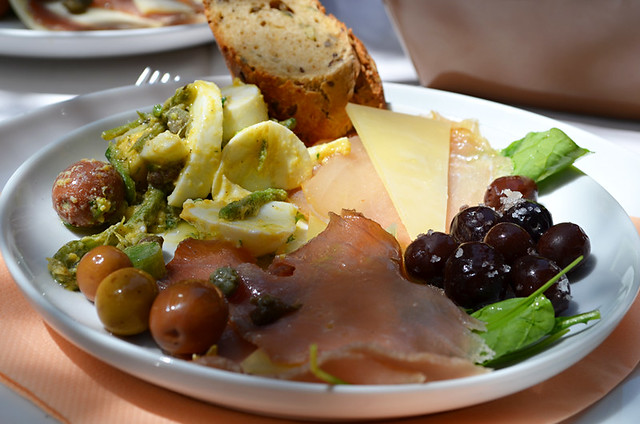 If an experience exceeded that of losing time in a Greek taverna it was an afternoon at Konoba Lambik on Hvar in Croatia. The walk to reach Konoba Lambik included wild flowers, olive groves, wild boar towers and English aristocracy. All juicy ingredients themselves, but the food and drink, all created, caught and distilled by the owners, erased memories of the walk and replaced them with an extra special experience. It was the first place I’d ever truly appreciated how good artichokes really were, thanks to a life-changing artichoke and broad bean stew.

On the road in the Atlas Mountains 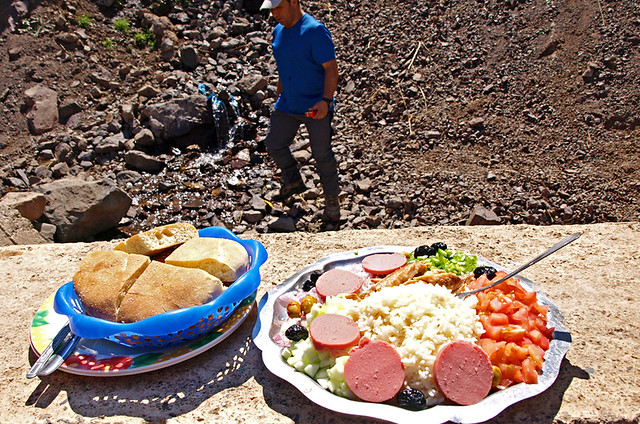 En route to to Tachdirt in the High Atlas Mountains I lay in the sun on a hot wall beside a dusty track whilst our guides washed peppers and tomatoes in a mountain stream, which also provided the water to boil rice and make sweet mint tea. The salad they created was a mish mash of ingredients, including tinned sardines, olives, chopped pork, rice tomatoes, green pepper and red onion with some fresh bread. It tasted as good as any salad I’d eaten in a gourmet restaurant. That dash of al fresco seasoning just can’t be matched indoors. 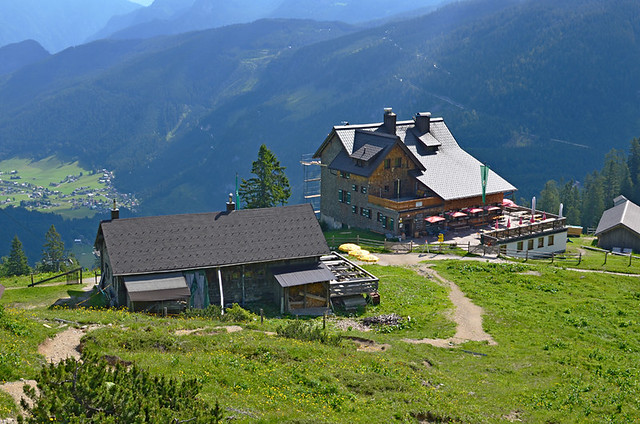 Austria and Germany’s hinterland is riddled with hüttes, perfectly positioned at some of the most scenic spots on mountain trails. Both countries are as good as anywhere we’ve been for being dependable when it comes to finding somewhere to have lunch mid-walk. The only problem is that many of the dishes on hütte menus are hefty affairs and lie too heavily on my stomach to be taken when there’s still a long way to go. Such was the case above Gosausee in Salzkammergut where, as everyone around us tucked into warming soups, we settled for belegte brote, a type of open-topped sandwich, with speck (cured ham) onions, gherkin and tomato. Another basic dish, but the accompanying views of the snow-capped Dachstein Mountains and a musically clanging cow bell soundtrack raised it way above the average mid-trail sandwich.

Lakeside Hütte in the Black Forest 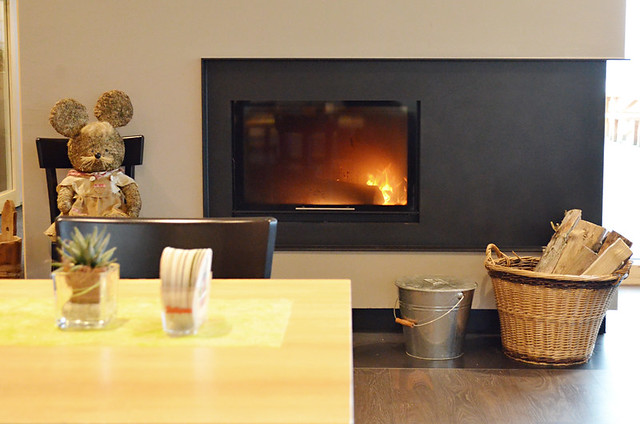 Rarely have I been so pleased to see a lodge/hütte/taverna/pub as I was to see Vesperstube Unterkrummenhof on the banks of Schluchsee in the Black Forest. Despite having wind-proof gloves and a hat a bear would eye enviously, the icy sleet which stabbed at exposed skin for hours as we’d walked around the large lake had robbed all feeling from fingers, feet and legs. The hütte was warm and welcoming and, despite there being a third of the route still to complete, we pigged out on currywurst and chips. It did exactly what a good hütte/taverna/tasca should do – act as a sanctuary for cold and hungry travellers

Lunch in a Cave in the Canary Islands 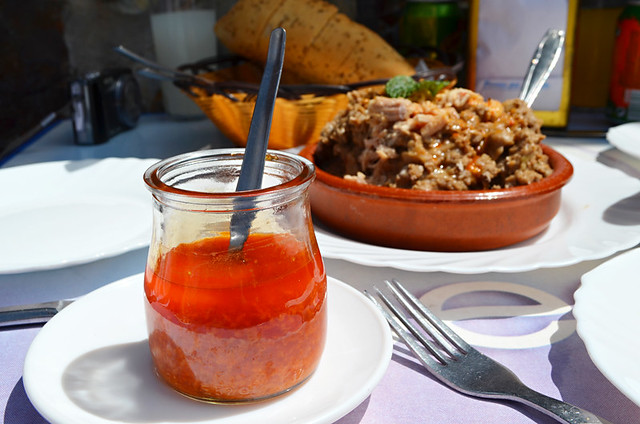 One of my favourite walks anywhere is in the Anaga Mountains on Tenerife, a place which is the antithesis of what many people think of when the imagine Tenerife. The route to the cave village of Chinamada is uplifting – ancient laurisilva forest, hamlets and narrow agricultural terraces clinging to hillsides, jagged peaks, tiny hamlets, goats, the odd hen and killer views. The cave village lies halfway along a circular route so perfectly placed for lunch in La Cueva. Ironically, most people choose to eat outside the cave part. The food is basic Canarian with the signature dish being a messy splodge called escaldón (basically stock mixed with gofio flour). I love it because it is the real Tenerife. 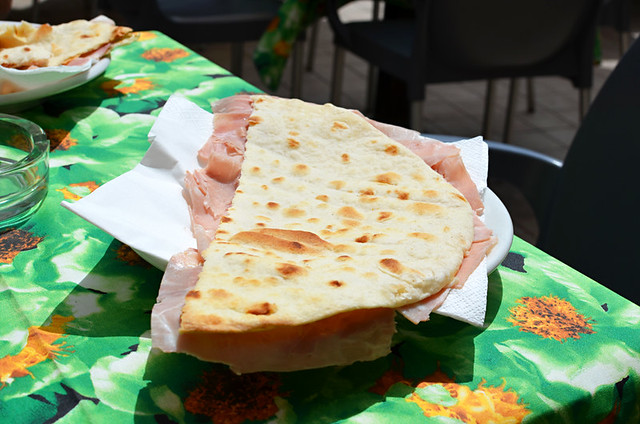 Everything tastes fabulous around the Italian Lakes. I can’t recall one mediocre meal. However, we didn’t always meet with success finding places to eat along the trails we walked. On one route we planned to eat in a bar/restaurant halfway along the route. It was shut… for lunch. On the largest lake island in Europe, Monte Isola on Lake Iseo, we were introduced to a classic Italian snack in a nondescript café with a sunny terrace overlooking this most dazzling of lakes; the piadina – basically a flat bread sandwich. I only ordered it because I saw another luncher eating something that perked my interest. They only did one type filling, ham and cheese. I loved it.

Trust the Italians to make even a ham and cheese sandwich seem gastronomically interesting.