Castello S. Jorge sitting high above Lisbon’s red-tiled rooftops is a shining example of why you can’t always trust what ‘wise’ old locals tell you. But I’ll get to that in a bit.

To counter gorging on Lisbon’s gastronomic goodies, we walked the warren of streets that wound up through the Afama neighbourhood of the city instead of cramming onto the famous No28 tram. It’s an interesting walk in itself with plenty of viewpoints over Lisbon. 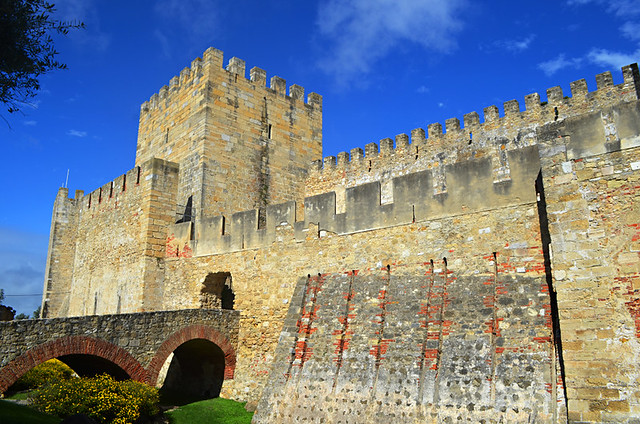 We like castles a lot. Obviously history oozes from their battle-scarred walls, offering a glimpse into the past. Apart from that, there are usually smaller stories to be heard, tales of local life rather than of kings and queens. Castello S. Jorge is no exception.

I’m going to keep the history part short. Any Google search will throw up the castle was built by the Moors in the middle of the 11th Century who were then ousted by Dom Alfonso Enriques in 1147.  Throughout the intervening centuries the castle was added to, especially after the earthquake in 1755 and military buildings were constructed that completely obscured the original fortification (take note – that piece of information is important). 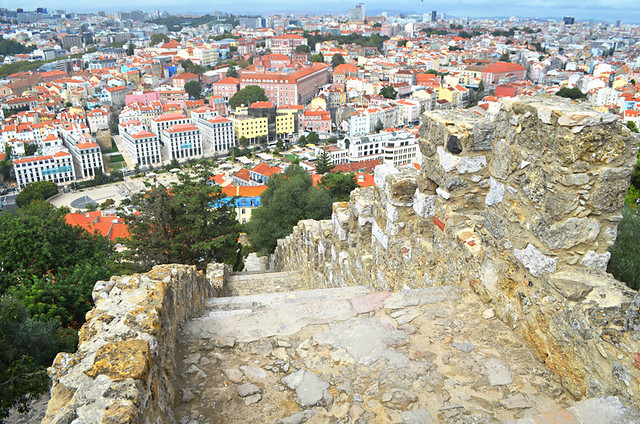 Getting inside involved waiting in a bit of a queue, but it was warm and sunny and we were kept annoyed entertained by an overweight American man from a cruise ship who loudly spouted the most absolute nonsense about Europe.

After getting rid of ‘know it all, know sod all’ (the toned down version of the saying) we were taken on a tour of the Castello’s highlights by Press & Communications Manager, Susana Correia. Susana put meat on the bones of the old bricks and mortar by pointing out spots like the Door of Treason (the place where secret messages were delivered), or telling us stories about King Afonso V who introduced lions to the grounds. Now there are only peacocks strutting their proud stuff beneath oaks, pine and olive trees. 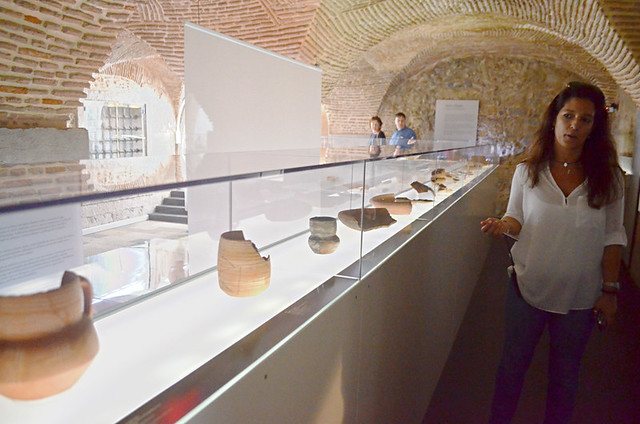 Funnily, one of the most interesting parts was the archaeological dig which showed the remains of 7th century Moorish houses. Don’t ask me why, but there was something intensely atmospheric about what amounted to little more than stone outlines in the ground. Susana’s commentary was peppered with modern snippets, such as why nearby residents can park their cars inside the castle grounds – it was a temporary arrangement whilst roadworks were taking place outside their houses. The work finished, the cars remained imprisoned in an odd little compound inside the castle to be let in and out on demand. It’s an arrangement that suits the influential locals if not the castle. 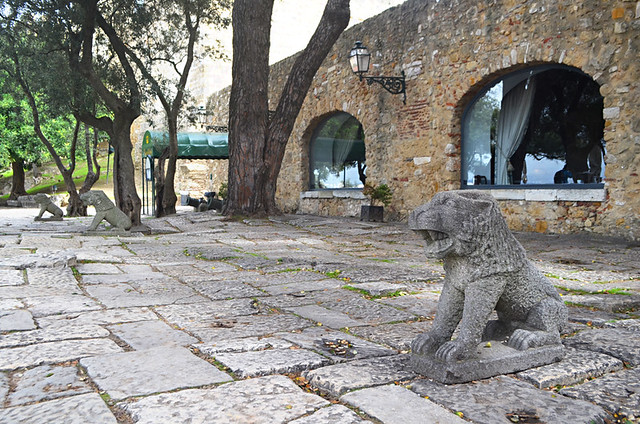 Our time with Susana was cut short by the arrival of a photographer and a couple of models from Eastern Europe who were scouting locations for a fashion shoot. She left us at one of the most intriguing of the Castello’s attractions, the camera obscura located in one of the Castello’s towers.

I knew about a camera obscura in Edinburgh, but had never seen it in action. What a bizarre and interesting contraption; a series of lens and mirrors directs live 360 degree images onto a concave dish. There is something deliciously voyeuristic and rather fantastical about standing in a darkened tower watching life in Lisbon projected onto a big bowl. It’s got a pretty effective zoom as well so if staying in Lisbon in a room with windows facing the castle, make sure you keep those curtains shut. 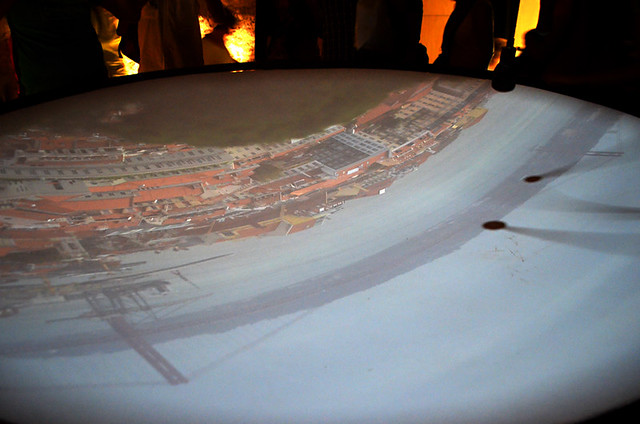 From camera obscura we casually strolled the extensive battlements, like guards who knew there was no danger of attack. On one side we had views over the city which constantly changed as we circled the ramparts. The scenes inside the castle were almost as interesting. It was a toss up between the wandering peacocks, musicians, a birds of prey enclosure or Susana and her Gothic Eastern European fashionistas, who looked like bored vampires as they teetered along with their pallid faces pressed to their phones. 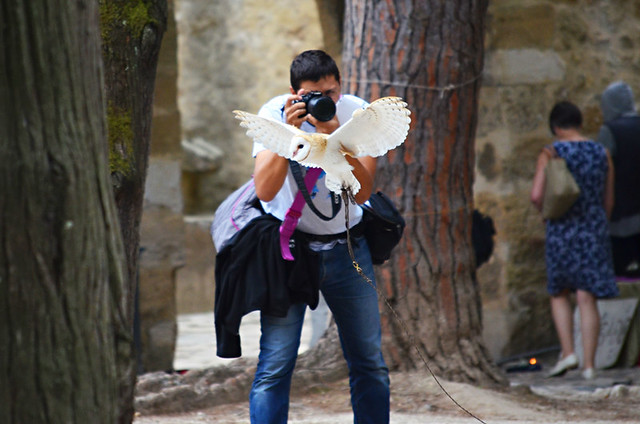 We ended our circuit back in one of the exhibition halls where sepia photographs showed what the  Castello S. Jorge looked like just over sixty years ago, before and after the renovation that revealed its true face. Then it looked more like Colditz, an austere prison with a more modern military façade. When the walls of the buildings were torn down between 1938 and 1940, the original fortress was exposed.

The exhibition of photos, like the car park, was supposed to be a temporary one. Susana asked the exhibitors if they would leave some of the photos because of the tales some old people in the city were telling. 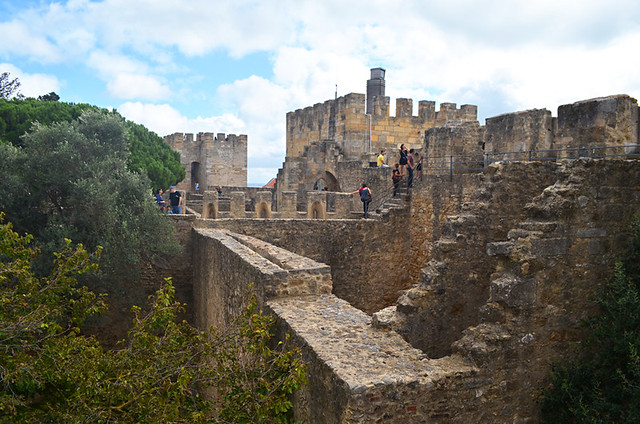 “They tell people this is a new castle,” Susana told us, laughing. “They remember the one that existed before this and know for a fact it looked different. They don’t believe the original Castello S. Jorge was concealed behind the walls. I wanted to keep the photos just to prove to them the truth when they wander in muttering suspiciously ‘this is all new you know’.”

And that’s why you can’t always trust what old people tell you.

The Castello S. Jorge is open between 9am and 6pm (1 Nov to 28 Feb) and 9am to 9pm (1 Mar to 31 Oct); entrance costs €8.50 for adults (free for under 10s and Lisbon residents) but there are various discounts and packages available. There are a couple of places for refreshments and food, the Castle Café and also Casa do Leao – the place where the lions used to hang out.

Eating around the world in Lisbon’s Mouraria district

The Cantina was tiny, dark, infectiously lively and our first proper taste of the life which makes Mouraria a seductive place to stay […]