Someone recently asked me what had been my favourite walk in the world.

The question stumped me. A montage of hiking clichés (plunging ravines, epic canyons, panoramic vistas) whirled around my brain shouting ‘pick me, pick me’. In the end I answered:

“I guess it’s the last good hike I did.”

It’s similar with cities. I don’t know if Lisbon is my favourite out of all the cities we’ve visited, but it’s up there. Whether that’s because it’s one of the most recent, only the passage of time will tell.

But there’s no denying Lisbon has an attractive personality that is hard to pin down, both a prince and a pauper of a city; multi-faceted and constantly surprising; gently holding the hand to escort those who prefer conventional attractions, and egging on those who like the more absurd, individualistic, off the wall and sometimes less polished character traits.

These are ten of those off the wall type things to see and do in Lisbon that we spotted. I’m sure there are many, many more.

Drink in a Ginjinha Bar 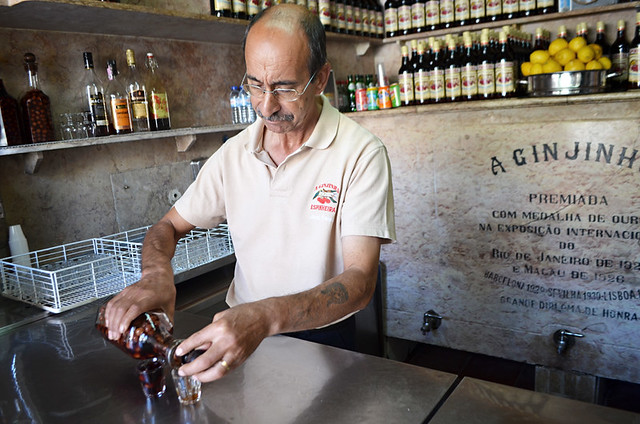 Standing in the street outside a quaint ‘hole in the wall’ bar singing ‘little ole ginjinha drinker me’ is a most enjoyable way to ease yourself into Lisbon’s playful spirit, at least it was for us. These stickily sweet sour cherry concoctions are cheap and make friends with the tastebuds far too easily. The area around Largo de São Domingos is a good hunting ground for ginjinha bars. By the way, the singing part isn’t compulsory.

Sexiest Toilet in the World 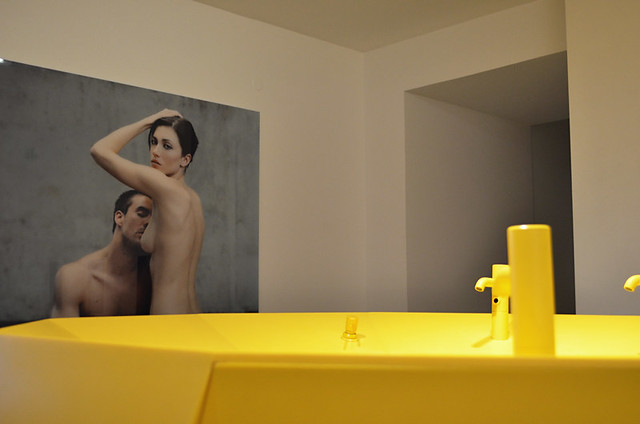 After having downed a load of liquid, a toilet stop wouldn’t go amiss. Why not do it, whatever ‘it’ is, in style in the Sexiest Toilet in the World on Praça do Comércio. At a Euro for your convenience, it’s probably also one of the most expensive W.C.s I’ve used in the world but when you see a sign screaming ‘The Sexiest WC on Earth’ you’ve got to check it out. Was it the sexiest? It had its steamy quality, but I’ve been in sexier ones. 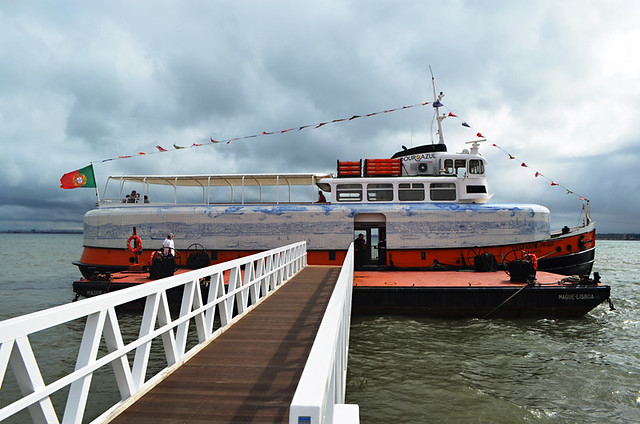 Trip being the operative word when it comes to entering the starburst of imagination that is the topsy turvy, undersea oversea world of Trafaria Praia. It’s probably worth leaving a bit of a gap after the ginjinha drinking before going on this mind-blowing journey.

Is that a Tuk Tuk? 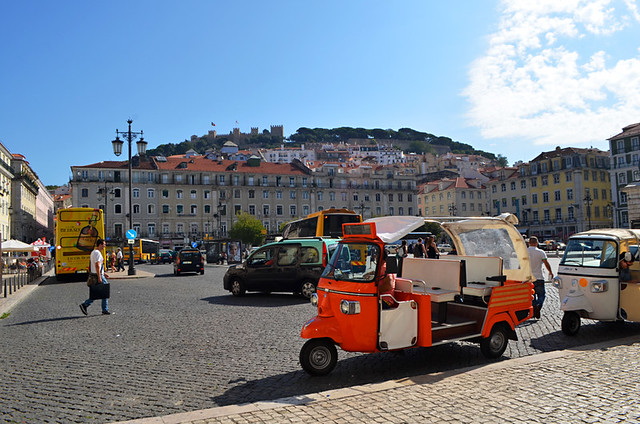 Forget touring the city on claustrophobic tram 28, jump on a Tuk Tuk instead to turn heads as you explore the old streets on three wheels. There are a number of circuits around the old centre of Lisbon. We didn’t do any of them – we’ve got some shreds of dignity left and some things just cross that cheesy line. 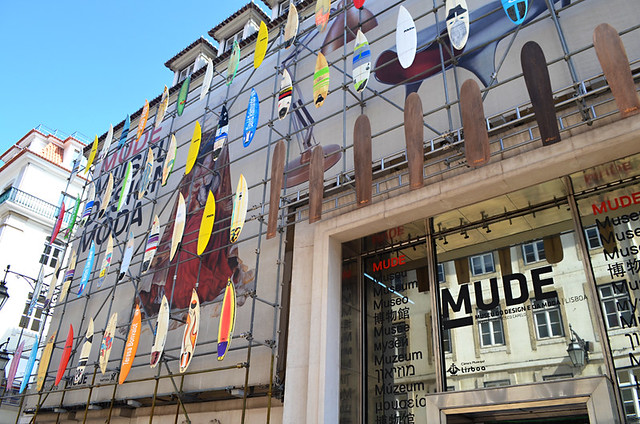 THE museum for fashionistas, MUDE on Rua Augusta is an urbanite palace of style whose stark  industrial exhibition rooms help make the exhibits really pop. It has an arty depth to it that was quite surprising to someone who was drawn in purely by the fact that it had a surfboard façade. Entrance is free and it’s open 10am-6pm Tuesday to Sunday. 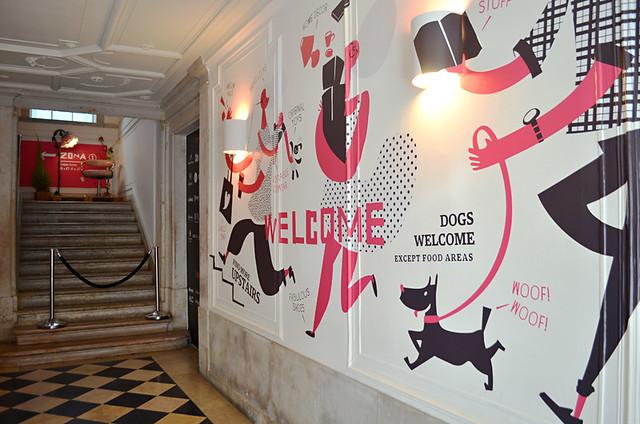 Mainstream shopping just doesn’t cut the mustard after a visit to MUDE. Somewhere with a cocky, stylish, unique swagger is needed. How about a converted 19th century Arabian Palace. The former Ribeiro da Cunha Palace opposite Praça do Príncipe Real is now an eclectic and exquisite looking shrine to fashion and food. In fact, the whole area around Príncipe Real has arty shop windows and intriguing doorways which have been equipped with powerful tractor beams. 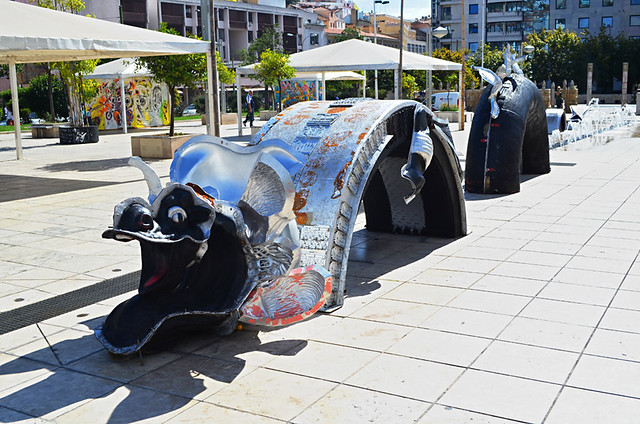 Sightseeing, shopping, having fun in Lisbon is a tiring business. Rest stops are required now and again to recharge struggling batteries. Lisbon has plenty of pretty praças and parks withe benches on which to rest weary bodies for a while. But every decent city can boast pretty squares. We wanted one with colourful attitude and Dragon Square (aka Martim Moniz) fitted the bill perfectly. Located in a multi-cultural area of the city which has been given a facelift and cultural boost in recent years, Dragon Square is an arty space with some fantastic world food stalls to dazzle your decision making skills. Basically, it’s got a vibe that is quite different from other squares. Plus there’s this dragon… 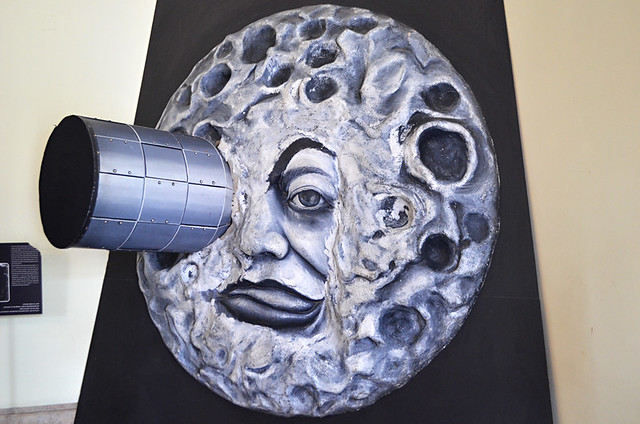 In fact, go see a few of them at the Junior Museum of Cinema on Avenida de Liberdade. They last as long as you want as they are on zoetropes. In truth the museum is small and very niche but it’s worth a visit just to see the movie models in the foyer. Open 10am-5pm daily (11am-6pm Saturday); entrance is €3.20. 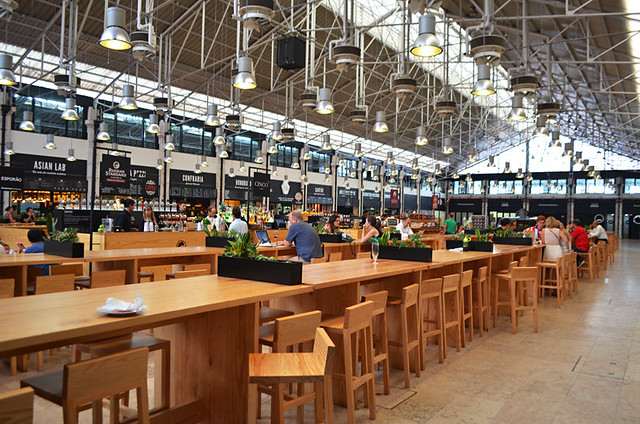 Like wide-eyed children in a sweet shop, we were drawn back to the Mercado Da Ribeira at Cais do Sodré a few times. It’s a culinary Aladdin’s Cave with an overdose of gourmet food halls inside a building the size of an aircraft hanger. The market has been a bit of a shapeshifter over the centuries, now it’s sleek and modern with long wooden tables and high stools filled by foodies on a feeding frenzy. From traditional food to creative cuisine and designer burgers to seafood this is one of those places where you want to try everything. I love it.

Chill Out at Sunset 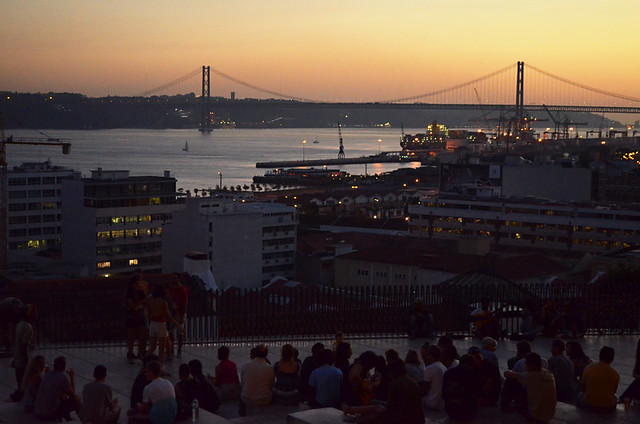 There are a number of choices at Miradouro de Santa Canterina depending on how native you want to go to watch the sunset. The terrace of the cocktail bar at Pharmacia is comfortable for sure, but we thought it felt slightly aloof; you could say, appropriately, slightly sanitised. Much better was the little kiosk at the viewpoint. But best of all is to buy a big bottle of Super Bock and join the quasi Bohemian locals, sitting wherever there’s a free spot on the Miradouro. It adds an extra glow to the whole sunset ambience.