We’ve generally been lucky with the weather on our travels over the last few years. Yes, we’ve walked along a narrow ridge in thick mist and gale force winds on La Gomera and had our ears rattled and battered by booming thunder and icy hailstones in the Pyrenees. But generally, wherever we’ve travelled the sun has shone at some point to allow me to grab at least a few photographs.

Our luck ran out in Oberammergau.

Incessant rainfall kept the camera under wraps throughout most of our time in the annoyingly picturesque Bavarian town.

I say annoyingly picturesque because even through the rain, it was obvious Oberammergau was a bit of a beauty spot with a perpetual Christmassy vibe as well as frescoed buildings that included Little Red Riding Hood house and Hansel and Gretel house. I desperately wanted to photograph the place. 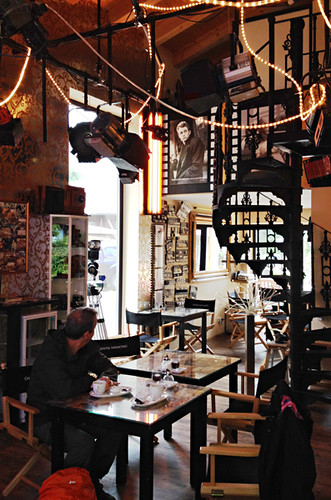 Our first attempts at finding a circular walk around the town were met with a wall of water that forced us to take shelter in the nearest coffee shop, the Spotlight Café. It was more like a movie memorabilia museum than a café, with director chairs featuring the names of an eclectic mix of actors including Richard Chamberlain, Danny Trejo, James Earl Jones, Chuck Norris, Sharon Stone… Vinnie Jones.

As we sipped our coffee my eyes were drawn to a montage of photos from movie shoots, then to the coffee shop owner, and back to the photos.

“Are you the guy in those photos?”

The owner of the Spotlight Café turned out to be cinematographer Hans Kühle and the names on the chairs were actors and directors he’d worked with over the years. After that we chatted about the movies he’d worked on and how he’d ended up in a place like Oberammergau. The café is a hobby to fill the time between movie shoots.
The rain delaying play had its plus points. We’d probably never have discovered this unusual coffee joint otherwise. 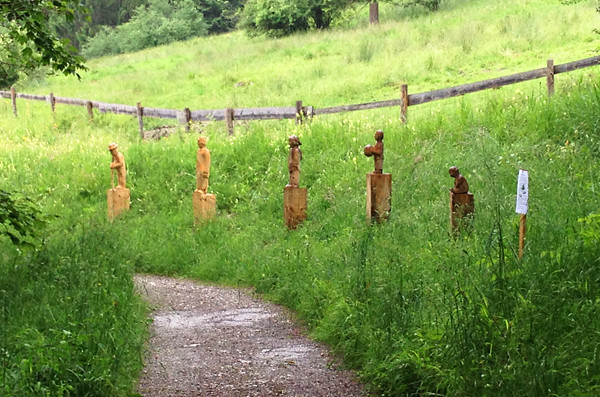 With no break in the rain forecast we decided to leave the camera gear in the hotel and go map out on our planned walk around the town and surrounding countryside. At least the rain downgraded to a drizzle as we crossed the River Ammer to climb to a crucifixion sculpture in the woods before dropping back through the town at its southern end to join up with the Altherrenweg footpath.
As most of the Altherrenweg runs through a forest, the natural canopy kept us relatively dry whilst breaks in the trees gave us glimpses of the sort of impressive scenery better weather conditions might allow. 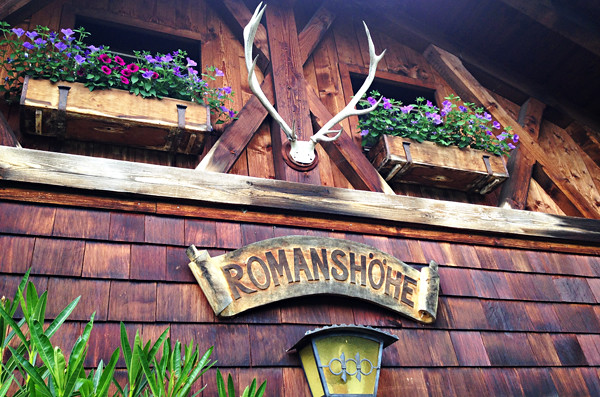 Despite the weather, it was an enjoyable walk that included a perfectly placed and cosy hütte at Romanshöhe which appeared right on cue at lunchtime. 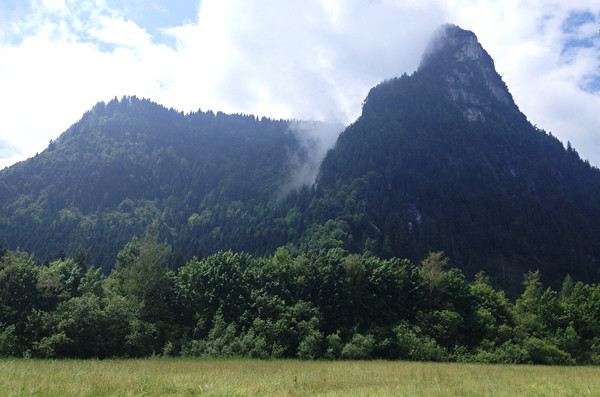 The sun actually did shine for our return trip to Oberammergau via country lanes and across babbling brooks… but we only had the phone’s camera to capture it.
As I thought the town was actually going to reveal its best face in time for me to grab my camera from the hotel, the sun slipped away again and the heavens opened. This time we sheltered under a dripping umbrella in a beer garden alongside an army of wet and muddy cyclists and hikers (there was a walking/cycling convention in the town). We were trapped in a beer tent – there are worse situations to be in I suppose. 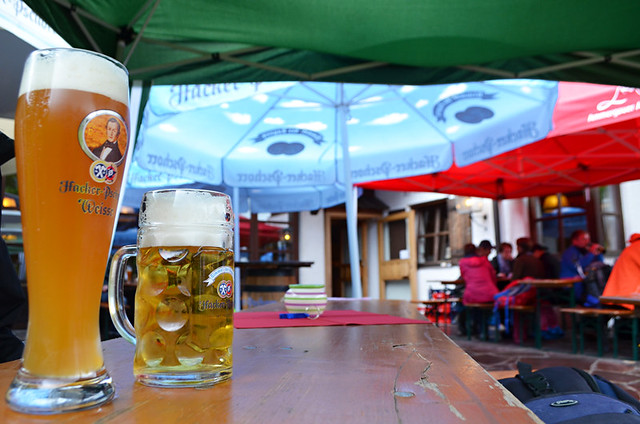 Nightfall brought no let up in the rain, which made dinner at Restaurant Wolf in the centre of town feel all the more welcoming and the hearty meat and knödel main courses warming (even though the rain wasn’t actually cold). The staff at the Wolf were jolly and service quick even though it was busy. Not gourmet food, just honest Bavarian fare at decent prices. 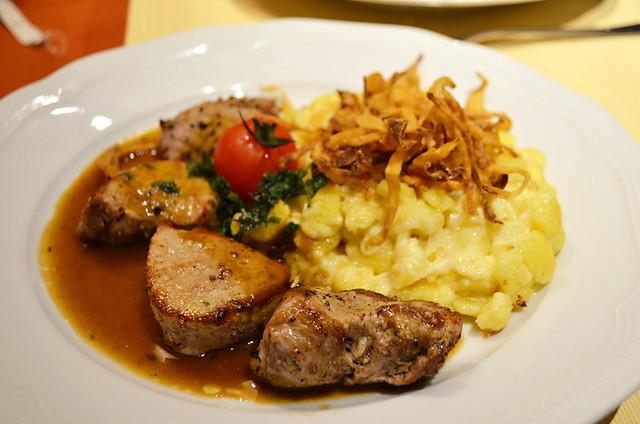 If anything Oberammergau is even more charming looking by night, with the ‘so kitsch they’re great’ shops looking even more festive than they do during daylight hours. The rain did at least pause long enough for me to snatch a couple of quick shots. 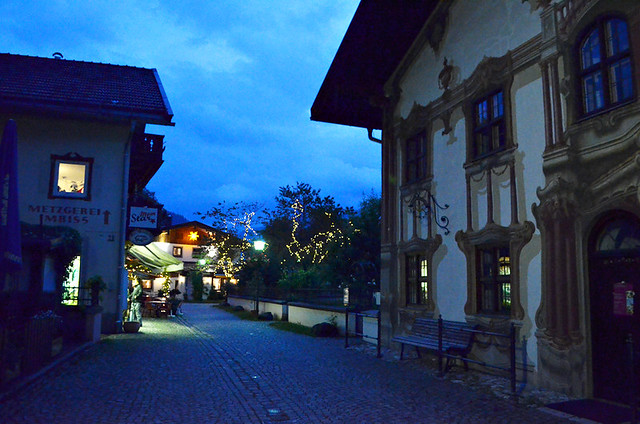 With barely a handful of Oberammergau images under my belt I’d pinned all my hopes on being able to run around the fairy tale streets on our last morning. But the day dawned worse than ever with the rain monsooning it down. Thanks to the conference in town, there was no parking near our hotel so we had to splash our way from Hotel Turmwirt opposite the St Peter and Paul Church to the car park at the Passion Play Theatre (the Passion Play which takes place every ten years being Oberammergau’s claim to fame).

Oberammergau’s weather had beat me, but at least I did manage to tick one item from my photo wish list as we sailed past in the car. 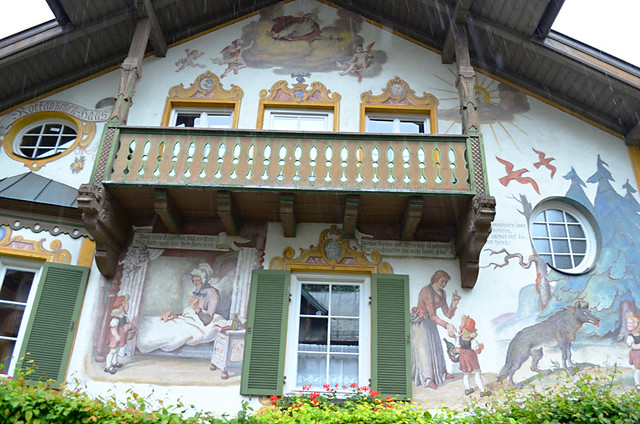