I’m on my knees with my hands held triumphantly high.

A few seconds earlier Clive Tyldsley had commented his way into sporting legend.

Sorry Munich, but for fifteen years whenever I heard your name I automatically slotted Bayern in front of it and memories of a magical night in May 1999 would come flooding into my head on a red wave.

That’s now changed. A visit to Bavaria’s capital did the trick. It was only a flying visit lasting a couple of days, but it was long enough to replace reruns of the Champion’s League final with memories of a city that had charmed us. 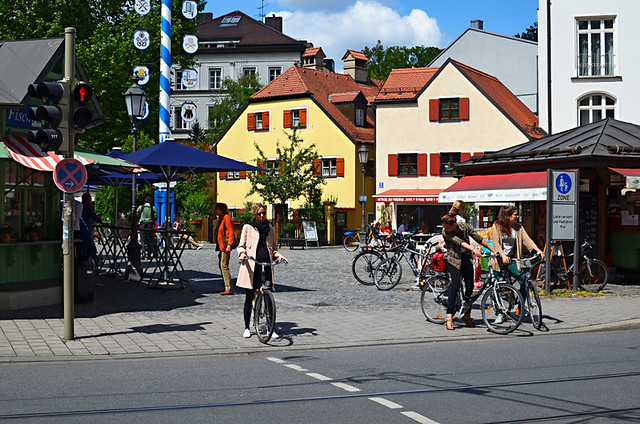 First Thoughts on Munich
‘Where do pedestrians cross the road?’ Between us and our hotel, the Torbrau (easily spotted as it is right beside the Isartor, a medieval gate built in 1337), was a road. Sure, there was a crossing right in front of us; however, it seemed to be a crossing designed for cyclists. There was no little green man. I was completely unsure of the etiquette; I’d never encountered a cyclist’s crossing before. Would I be breaking the law if I used it? 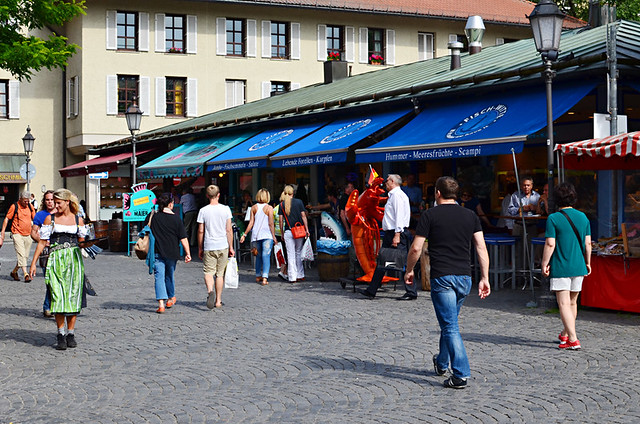 Viktualienmarkt
Here’s a Munich tip. If time is short, don’t start an exploration of Munich at the Viktualienmarkt. Within a few minutes of nodding appreciatively at pristine spires that matched exactly the vision of Bavarian architecture I’d had in my head, we were sitting in the sunshine nursing a bier and people watching in the Viktualienmarkt, the oldest food market in Munich. It’s a magnetic place that is difficulty to drag yourself away from – the stalls look fabulous, the little statues of local tradespeople add interest and there can be some colourful characters around. A woman in questionable military garb, jackboots, peaked cap and with red lipstick so bright it could make the sun blink, drew more stares than just ours. 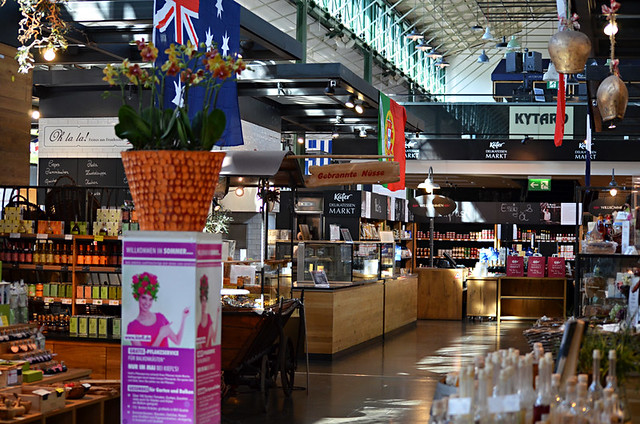 Schrannenhalle
Here’s a Munich tip part 2. If time is short and you’re a foodie, avoid the Schrannenhalle as well. The indoor market (gourmet food and gourmet food stalls) is another time bandit. In between both we passed something else I’d never seen before, a shop devoted to muesli. 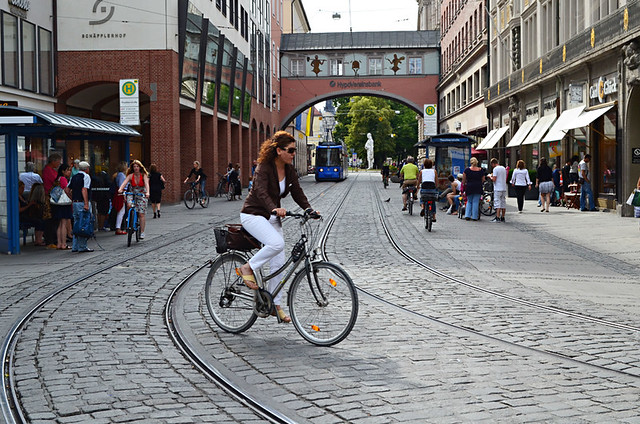 Walking and Watching
It’s not always about famous landmarks, interesting museums, quirky corners. We love to simply walk around towns and cities checking out shops, bars, restaurants… markets; basically absorbing the life and soul of the place. What was rapidly apparent in Munich was the streets bustled with a youthful, vibrant vibe. It felt like an energetic city, but not frantically so. There is simply an infectious and appealing buzz that made fans of us. 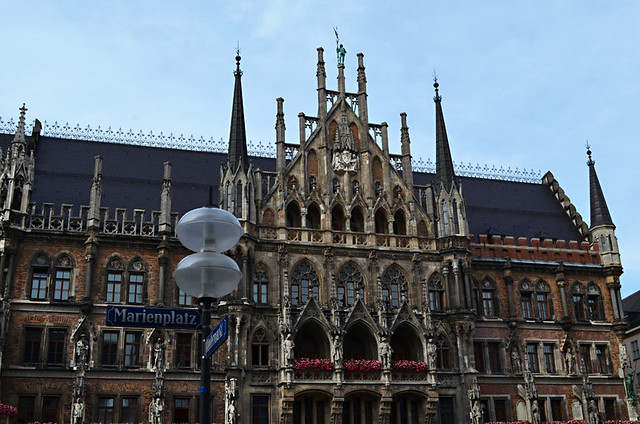 Marienplatz
Munich’s main square since 1158, Marienplatz used to be the place for buying food and watching knights show off their prowess with their big lances. It’s claimed that a local butcher creates the weisswurst Bavarian sausage in the platz. It’s now the spot to watch an animated Glockenspiel on the Neues Rathaus play out scenes from the 16th century to mark 11am and midday. We missed this tourist highlight – probably distracted by the Viktualienmarkt. 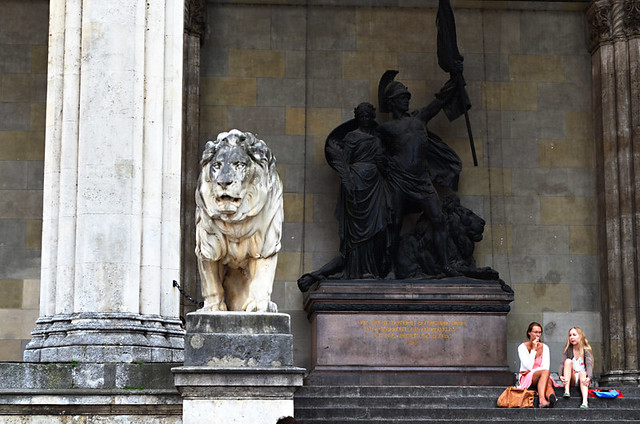 Odeonsplatz
Odeonsplatz looks at first as though it’s austere and serious. Palaces and monuments border a square which has seen more than its fair share of violent clashes. Now all is cool and calm; it’s a place where students hang out… so we did the same. As we people watched, I spotted that every so often someone passing the lions at the entrance to the Residenz on one side of the square would absently reach up and rub an odd little face at the base of the lion statues. Apparently it’s a good luck thing. 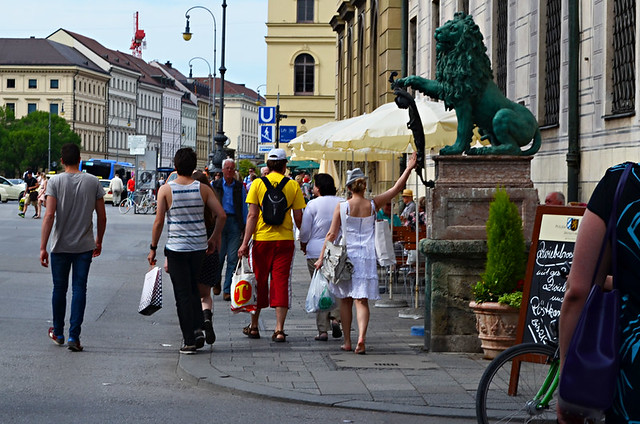 The Other Side of the River
Thanks to an Eat the World tour we did something we wouldn’t have otherwise done, we ventured into the Haidhausen District. Once the poor relations to the world on the other side of the Isar River, Haidhausen is quietly bohemian with charismatically quirky shops and cafés. We ate a cake that required a special oven to make it, drank lavender flavoured hot chocolate and bought prosecco cheese whilst being shown pretty squares which had risen from the dark days of decay when the area experienced much of the inner city problems that had plagued many European cities. 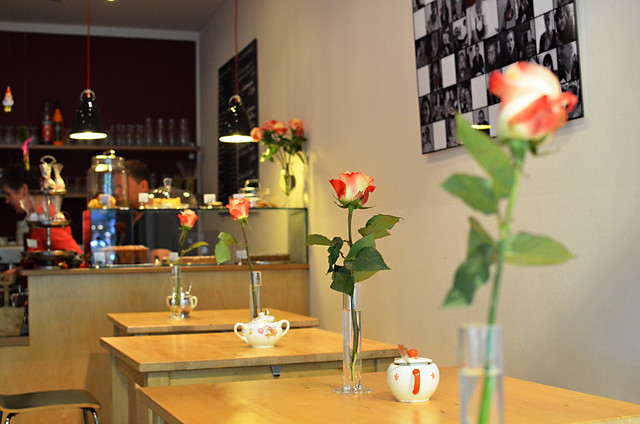 Food Two
Only having a couple of days and having some timing outside of our control sent us into a sort of frenzy of indecision and we made a couple of knee jerk decisions when it came to food. Subsequently on the afternoon we arrived it was so late we grabbed the first thing we spotted – and ended up munching a couple of boreks on a bench on Tal. We fared far better later, choosing a romantic and trendy little gourmet restaurant called Zwickl just off Viktualienmarkt. So many scrumptious things to eat, so little time. 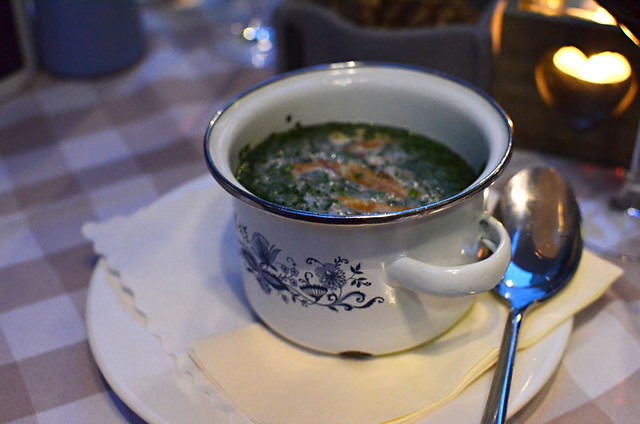 Isartor and the Red Carper Bar
As if our taster tour of Munich hadn’t been enough to convince us it was a city worth a longer, return visit, there was also one of the most fun ideas for a bar I’ve ever seen. The Red Carpet Bar was only a temporary affair, consisting of a red carpet and a beer tent set up inside the old gate, Isartor. To enter the bar you had to had to walk the red carpet to a barrage of camera flashes. As the night progressed some red carpet exits became more stagger than swagger. 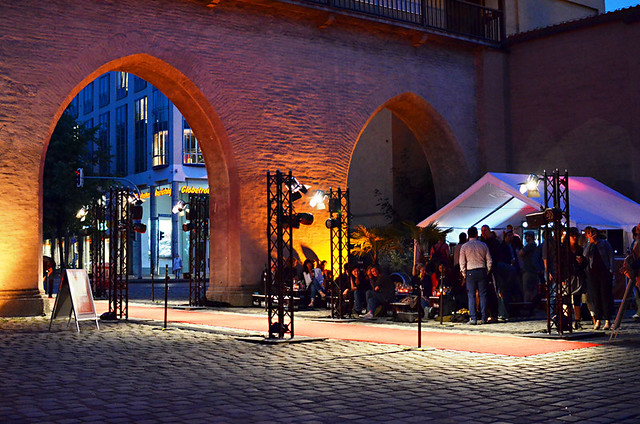 Fun, fascinating and friendly – Munich is our kind of city.