I hate it when you sweat your way up a lion-faced mountain, get drenched crossing a lake (by rain, there was a bridge), sweat your way up another mountain and cross an alien landscape to reach your remote goal to find there’s a coach spewing out its load, filling the unique place you were planning to have lunch. 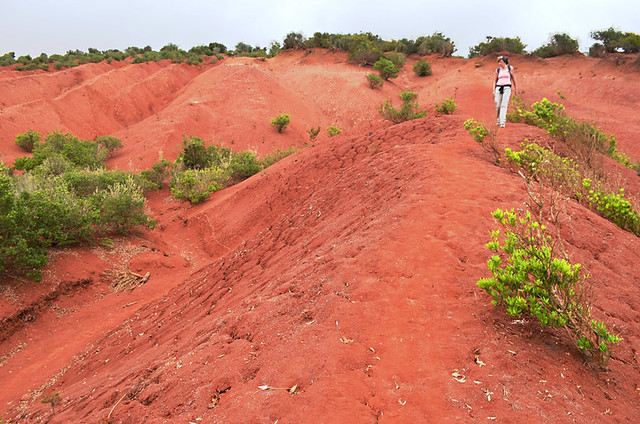 Hell, there isn’t even a sign pointing to the Mirador de Abrante above Agulo on La Gomera yet.
But, as we dragged our dusty, sticky bodies the final few metres across the red earth, we watched an army of tee-shirt/flip flop wearing excursionists from Tenerife fill all the best seats in the restaurant that’s part of the Mirador.

We’d wanted to visit since hearing about its glass floored mirador long before it opened. A friend who lives on La Gomera has been a couple of times since it finally opened in December 2014 and raved about the food. As a vegetarian who struggles to find food she likes on the Canary Islands, this was high praise. 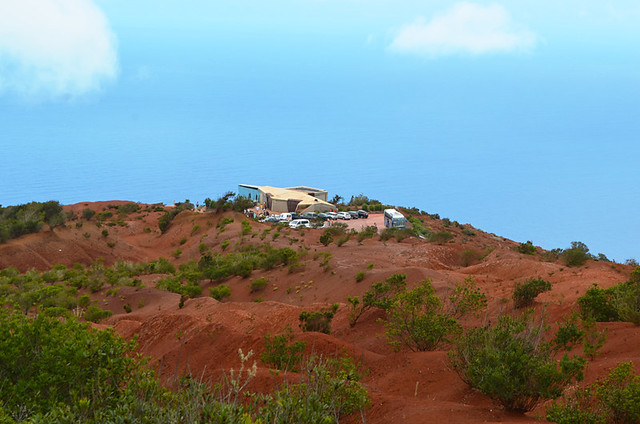 The approach had started the juices of anticipation flowing. The futuristic concrete bunker-like building with a glass proboscis protruding beyond the cliff edge could have been too much of a stark contrast to the odd volcanic landscape. But somehow it fits in, looking more like a scientific outpost on some strange new planet.

There’s a small outside terrace with more glass viewpoints; however, it was the glass gangplank, high above the town of Agulo that we wanted to tread.

But it was nearly full. Although there were a couple of tables left unoccupied we hesitated at the door. No place that feeds the masses is going to serve quality food, especially in the middle of the serving. 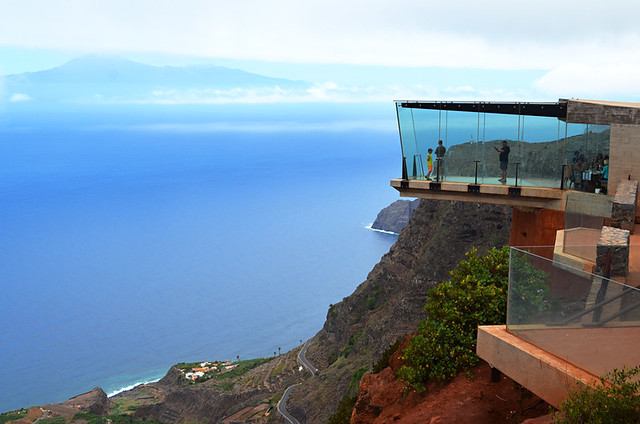 My mood was as dark as the clouds that lessened the impact of the vista to Tenerife and Mount Teide through the floor to ceiling windows. Eventually I reverted to shouting a word that has never sat comfortably, even though it’s a standard Spanish attention-grabber.

It did the trick. Within moments the waiter brought menus to the table. Good menus, great menus with lots of tasty sounding dishes. There were plenty of non-meat options so I could see why our friend liked the place. 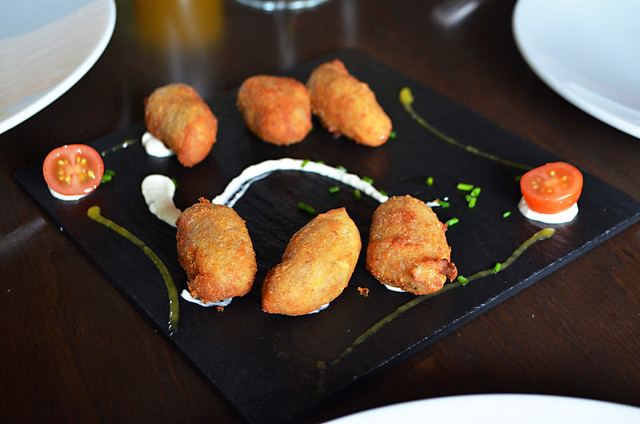 We ordered papas bravas, ensaladilla and croquetas – all standard dishes, but with differences. The ensaladilla was ensaladilla rusa con picos de jerez. The croquetas came in five flavours, including blue cheese.

Resigned to the fact it would probably take ages to prepare, we had a nosy at the food turning up on the plates around us. In truth it didn’t look the usual mass produced, coach excursion fare. It had some panache. Okay, it looked really good.

I could see the chef preparing dishes on an open counter. Despite the numbers, he was clearly taking pride in each one. 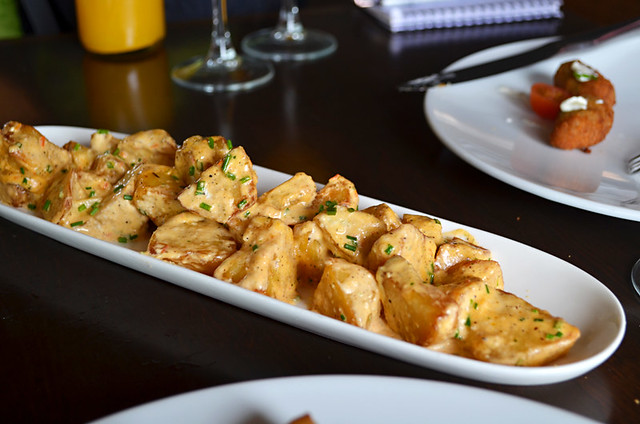 The second surprise was our tapas arrived on the table a lot sooner than we’d expected. And they looked the business. The croquetas were fresh, crispy and tasty; the ensaladilla creamy, chunky and with a hint of sherry to add some pizazz, and the papas bravas (Canarian style) were in a rowdy sauce that really let the taste-buds know they weren’t your run of the mill papas bravas.

Just as I was relaxing into the experience, my ears were stabbed by a piercing whistle. At first we thought it was some plonker’s phone. After it happened a few times, the penny dropped. It was Silbo, La Gomera’s whistling language.

The upside to sharing the Mirador de Abrante with a coach excursion was that we had a Silbo exhibition thrown in for free. It’s the first time we’d seen (heard) Silbo in action. I won’t go into details in case you ever find yourself in a Silbo display scenario but I have to say it was an entertaining and impressive display.

What was even more impressive was it was the waiters who’d been rushing about a few seconds ago who were talking in whistles. Silbo-practising waiters; you won’t find many people with those skills. 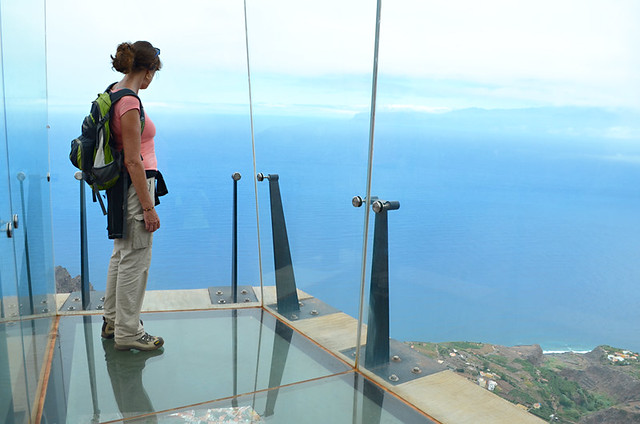 With the Silbo display over the tour group departed and we had the Mirador all to ourselves.

Neither of us suffer from vertigo. Not now anyway. But stepping out from the cliff edge on a glass-bottomed floor isn’t the same as walking out on any other type of viewing platform. 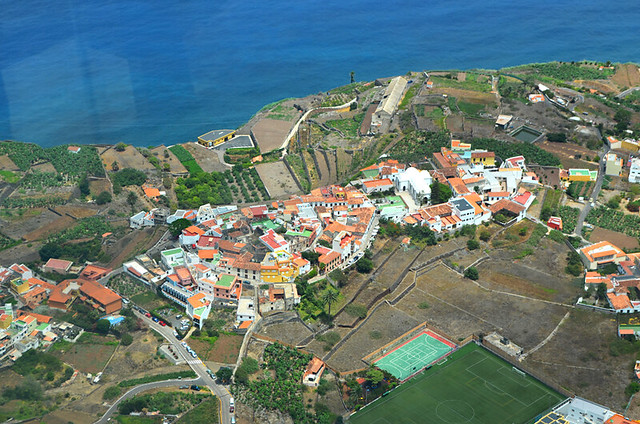 The Mirador de Abrante experience didn’t have a promising start. But despite our prejudices against places that cater for coach parties, they won us over.

We left happy, buzzing and with satisfied tums… as well as feeling more comfortable with our feet back on solid ground.

Mirador de Abrante; Carretera del Mirador s/n La Palmita, Agulo; main courses average €12, tapas dishes range from €3.50 to €6; open 11am to 6pm Monday to Friday and 11am to 7pm Saturday and Sunday. At the moment coach excursions only descend on Wednesday and Thursday.