Somewhere along the line what should have been the sort of ingredients that pushed a place to the top of a ‘must visit’ list became the sort of ingredients which made us wary of a destination. Evora in Portugal had these ingredients by the sunny bucket load. A walled historic town, picturesque streets which ooze character, churches and palaces galore, pretty squares and a UNESCO World Heritage Site to boot. The Romans, Moors and Portuguese royalty have all had their turn at enjoying Evora’s charm. Now, understandably, it’s a popular tourist destination.

We knew it would be a pretty and fascinating place, but the big question for us was would Evora turn out to be another Dubrovnik or Carcassonne? 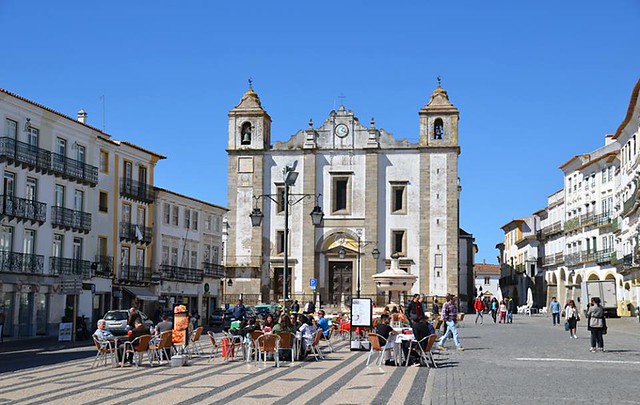 “Don’t eat at any of the restaurants in the main square,” was the first piece of advice given by a young resident. So we didn’t. Praça do Giraldo is a peach of a praça though – immaculately tiled, cool arched walkways with independent shops and busy pastelarias with non-touristy prices, a flamboyantly baroque marble fountain and the 16th century Church of Santa Antão. Like many squares of this ilk it’s a people-watching paradise. Although we didn’t eat there we knew if we wanted to bask in the sunshine in its centre watching the world go by with a couple of Super Bocks we’d have to pay the price. And it was very pricey, €7 for two beers.

Temple of Diana… or not 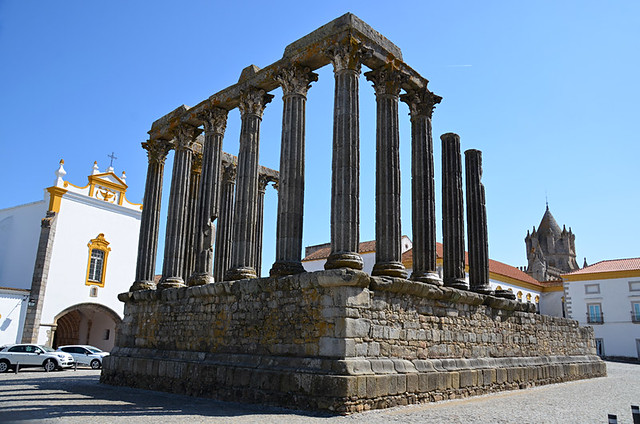 For a small town there’s a lot to see in Evora. Architectural influences from various ages sit comfortably in each other’s company. At Largo Conde Vila Flor the columns of the Roman Temple (or Diana’s Temple as it’s also known, although that name is disputed) date from the 1st century whereas the Convento de los Loios where the Pousada is located spans the 15th to 17th centuries. Instead of looking at the views from the small gardens there, it’s more interesting to turn inwards and frame the contrasting spires and whitewashed palaces between the temple’s columns 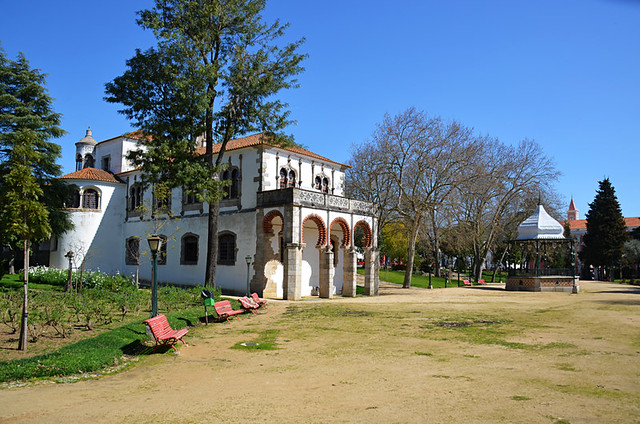 There are a few green zones to be found around the perimeter of the old town. On a sunny March day the trees in the Public Gardens were still lacking in the leaf department, but it was still a pleasantly relaxing place to wander and take time out with a coffee (ridiculously cheap) beside a duck pond where a mother duck struggled to control some of her more wayward yellow chicks. Adding a touch of regal grandeur to the park is the Palacio de Dom Manuel whose curved arches, elegant balconies and whimsical window frames are a Roman/Moorish/Baroque fusion. 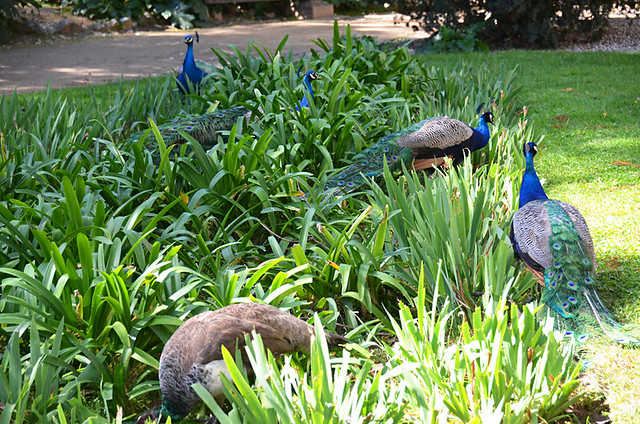 When we were there few people continued beyond the Palacio de Dom Manuel after which the gardens continue to hug the old walls, passing more Roman ruins, quaint houses framed by lavender wisteria and the biggest pride of peacocks we’ve ever been dazzled by.

A maze of streets 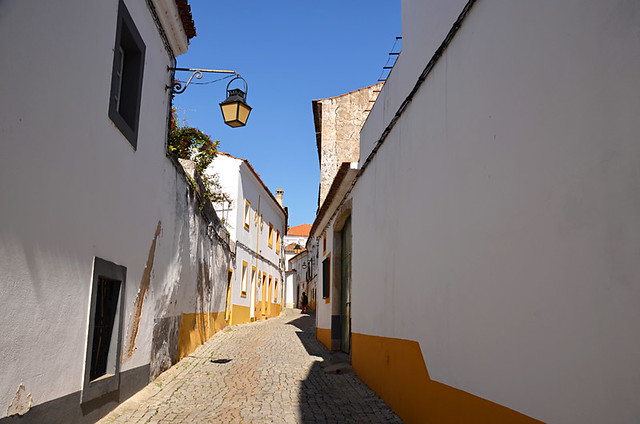 I’ve generally got good inbuilt navigation, but three days wasn’t really enough for it to finely attune itself to the spider’s web network of streets which fan out from the main square. But it didn’t matter; every one of them is charming and leads to somewhere interesting. Taking a magical mystery tour is fun. Evora is one of those places where you really might stumble across a hidden… nope I can’t say it, but you get my drift. 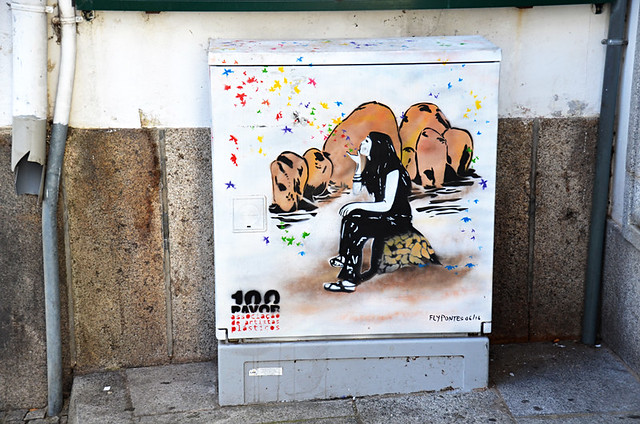 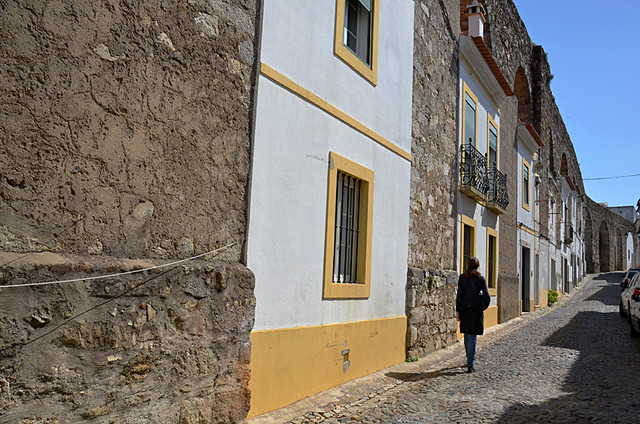 In places like Segovia a remarkable feat of engineering like its Roman Aqueduct is one of the old town’s highlights. The 16th century one in Evora, the Aqueduto da Água de Prata which once brought precious water to the locals, virtually sneaks out of town as though it doesn’t want to make a fuss. We followed it through the town, amused that some arches had been bricked up and turned into homes, before the aqueduct came to a halt rather anonymously at an ordinary house. If anything, it made the aqueduct feel more real, like it was still a part of the town rather than a showpiece. 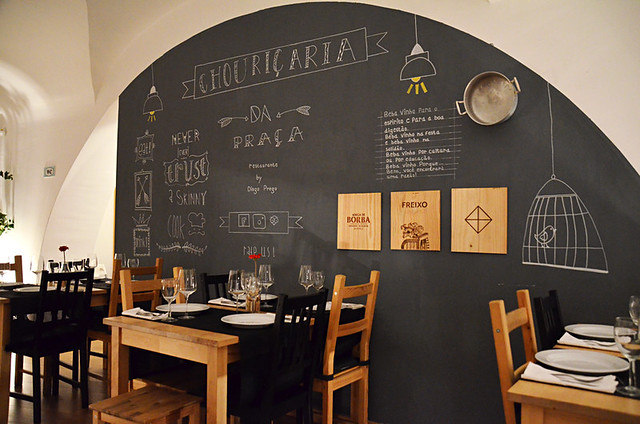 When we asked a hotel receptionist if there was anywhere we could find a prego (type of sandwich) with fillet of fish instead of the traditional steak (we’d had some in Lisbon and loved them) he replied: “This is Evora, the modern type of food you have in Lisbon hasn’t reached here.” It was a reply which surprised the hell out us Evora had more than its fair share of restaurants serving contemporary versions of traditional food, as well as plenty of solid traditional restaurants. We ate exceptionally well in cosy, yet slickly good looking places and it didn’t cost a lot. A taster menu consisting of seven courses in Origens on a narrow street behind the main square came to €35 each, and that included wine pairings. Incidentally, we found our prego with fish in a traditional café. 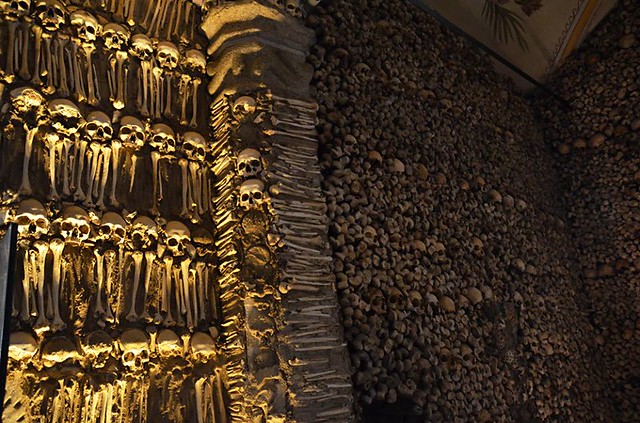 “We bones that are here await yours”. The most macabre religious structure we’ve visited is without a doubt the Capela dos Osso (Chapel of Bones), part of the Church of São Francisco. Devised by a Franciscan monk in the 16th century to imaginatively get across the message that life is short, bones from 5000 skeletons taken from surrounding cemeteries make up the walls, window and door frames and parts of the vaulted ceiling. With the sun streaming through the window, 5000 skulls staring at you is more surreal than scary. After dark it would probably be a different matter. Entrance is €4 for adults and worth it, especially as it includes a rather nifty nativities from around the world exhibition. 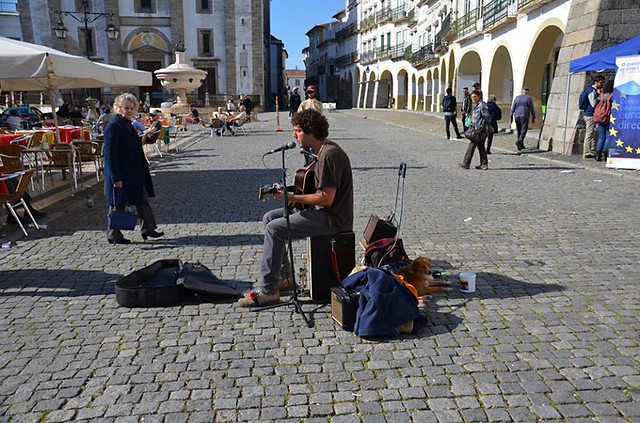 A young busker singing Folsom Prison Blues was decent enough, but there was no way he was going to top a blues musician whose dog bayed and barked along to the songs. It was comedy gold. I don’t know if the singing dog is a regular feature on Evora’s street, but as it has a strong artistic character I’m willing to bet there are usually good street musicians doing their thing on the cobbles.

You may have noticed there’s been no mention of a common ingredient in places like this – hordes of other tourists. There were other tourists and there were tour groups, but not so many to overwhelm the soul and character of the place. Summer might be a different story, but Evora in March was charming.

About admin 1 Article
Andrea (Andy) Montgomery is a freelance travel writer and co-owner of Buzz Trips and The Real Tenerife series of travel websites and travel guides. Andy is the Tenerife Expert for The Telegraph and is the author of Pocket Rough Guide Tenerife & La Gomera. As well as her online work, she is published in The Telegraph, DK Guides, EasyJet Traveller Magazine, The Independent and, Wexas Traveller.

Dubrovnik is King’s Landing, The Game of Thrones Tour

Dubrovnik must be a film-maker’s dream. It is exquisite looking and, with the barest of tweaking, is a perfect Medieval setting for tales of swordplay and magic… […]