Although Jack and I spend most of our calendar year walking, more often than not we’re pulling on the hiking boots on another island or in another country so we rarely get as much time as we’d like to go walking on Tenerife. But every year we try to re-walk all of our Island Walks self guided walking routes to ensure they’re still up to date and that paths haven’t been closed or, just as importantly, opened up. 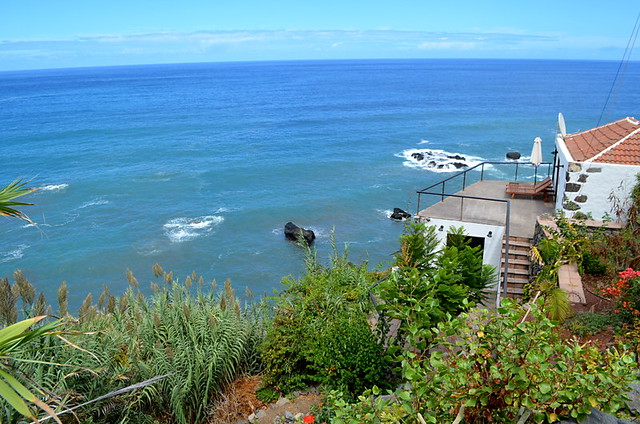 Over the past three months we’ve been on a mission to re-walk every route we recommend (no easy task given that we have 30 routes covering the entire island) and to look at including some new ones. For example, with the popular Barranco del Infierno still officially closed to the public and no real sign that the talk of re-opening it is ever going to get beyond talk, we have now included the fabulous Roque Del Condé walk into our Old South package to compensate.

Grabbing days out in between deadlines and a plethora of visitors who descended on Tenerife during November, we have now almost completed the round of our routes save for a couple where the recent poor weather scuppered our plans and have had to be rescheduled. At the end of summer we re-walked three of our coastal routes in a day and yesterday we walked the east coast. In so doing, we’ve been reminded once again just how diverse and beautiful Tenerife’s coastline can be. 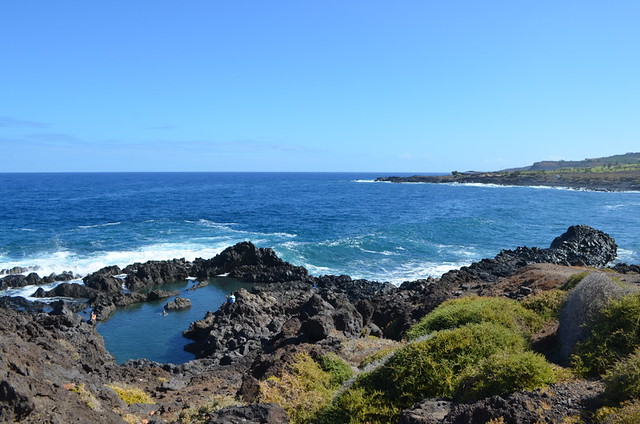 Beginning in Buenavista del Norte at the western end of the north coast, we parked alongside Las Arenas beach and followed the pretty coastal path that runs both west and east from there. Heading west, we lingered a while on the little viewing platform that juts out over the sea before following the coastline as it skirted inviting rock pools where bathers floated effortlessly in the clear water, and hidden coves at the foot of stone steps. At the little beach of El Fraile, beneath the towering rocks and windswept lookout point known as Mirador de la Monja (the nun’s viewpoint), we turned around and retraced our steps, joining the path eastwards at the edge of the Buenavista golf course. 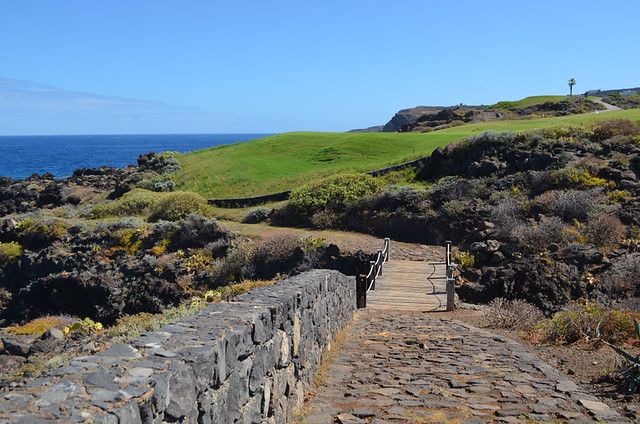 Ambling between contrasting landscapes of black, solidified lava lapped by cobalt ocean on one side and the manicured greens of the golf course on the other, we made our way to the tiny, boat builder’s cave workshop in its secluded cove where we drank in the solitude, the sound of the waves lapping onto the launch ramp and the intoxicating sea air before heading back. 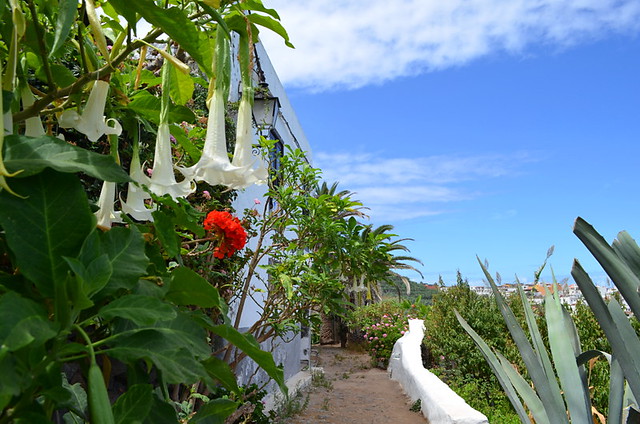 Driving up the coast to San Juan de la Rambla we took the path from the little coastal village of of Las Aguas and climbed above the sheer cliff face on the old camino real. More remote and less manicured than Buenavista, the path weaves its way along the coast past isolated cottages whose trailing geraniums creep along the path beneath the laden boughs of brugmansias, to the tiny hamlet of El Rosario. Now feeling more like a Greek Island than an Atlantic one, we continue through the white stone village and descend into the barranco at a small pebble beach before climbing out the other side and rounding the headland of the Los Realejos coastline. 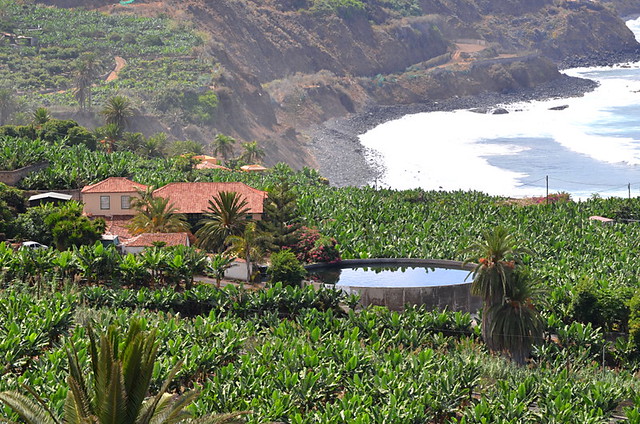 For our third route of the day we headed back towards Puerto de la Cruz and enjoyed a late lunch break at the pretty Mirador San Pedro restaurant before following the familiar and popular Rambla Del Castro coastal walk. This has long been our favourite coastal path, covering what we consider to be Tenerife’s most beautiful coastline with its banana plantations, palm groves and old haciendas. The little fort of Él Fortín is unfortunately closed at the moment due to the risk of rock fall but the meandering path more than compensates with its view over the coast. Traversing barrancos and ambling through the coastal settlement of la Romántica, we descend once again to sea level at the little Playa de Los Roques with its eponymous granite monoliths before emerging at the outskirts of Puerto de la Cruz and retracing our steps back to Mirador San Pedro. 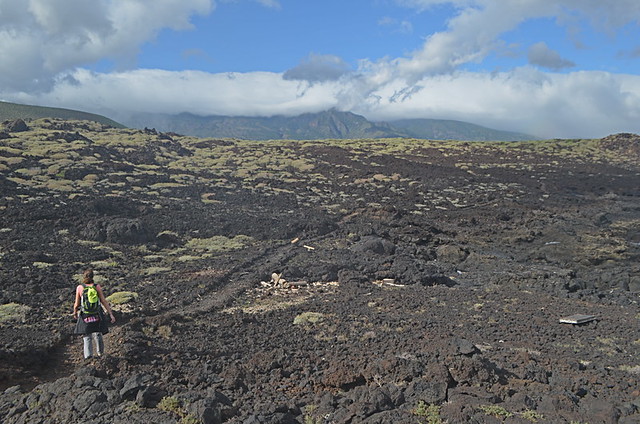 Yesterday we headed down to the east coast Güímar Valley, a side of Tenerife that remains a virtual recluse to the mass tourism market, catering instead to a handful of predominantly German visitors who come to enjoy the tranquillity and the unspoilt landscape and to explore the island on foot. The contrast between the fertile north coast and these volcanic badlands could not have been more marked. Beginning from the little coastal settlement of El Puertito with its fish and seafood restaurants, we ambled out across the black lava that coats much of this coastline, the result of volcanic eruptions 10,000 years ago.

Decorating the black landscape amidst the driftwood that gets deposited all along this coast by the movement of the tides, are bright clumps of sea heath and sea lettuce and the occasional patch of golden sand where the lighter pumice has been broken down by the pounding of the sea. In the rock pools that fringe the shore, curlews and turnstones pick for tasty treats. 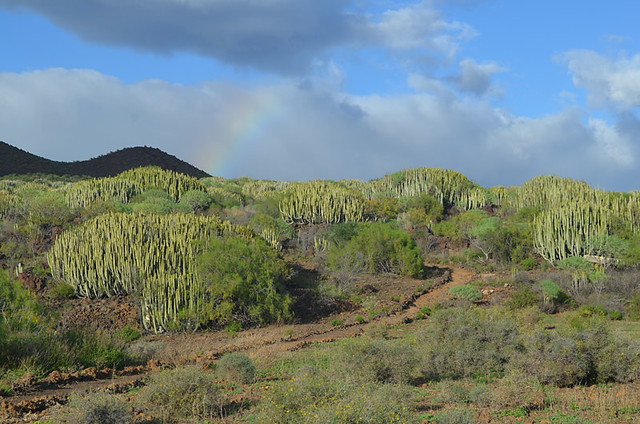 As we move away from the sea and towards the Montaña Grande which dominates the otherwise flat landscape, the flora morphs into some of the best examples of tabaiba, or euphorbias, to be found on the island. From umbrella stems to fat spikes reaching for the sky, the desert appearance of the euphorbias is softened by the swaying heads of grasses which bring a feng shui beauty to this extraordinary landscape.

Two days, four very different coastal walks and every one of them an opportunity to stand and stare, to breathe in the ozone and to realise, not for the first time, just how special the Canary Islands really are once you move away from the tanning crowds.

All our recommended Tenerife coastal walks are contained in Captivating Coastline, sent as a gift with any purchase of Island Walks or Island Drives.