“What day is this?” muses André. “Thursday. Okay there will be people drinking in the street outside tonight but not kids, not noisy, just friends out for a drink.”
He hands over the keys to his brand new, attic apartment with its New York, urban chic design and rooftop terrace with voyeuristic views over Rua de Bica below. 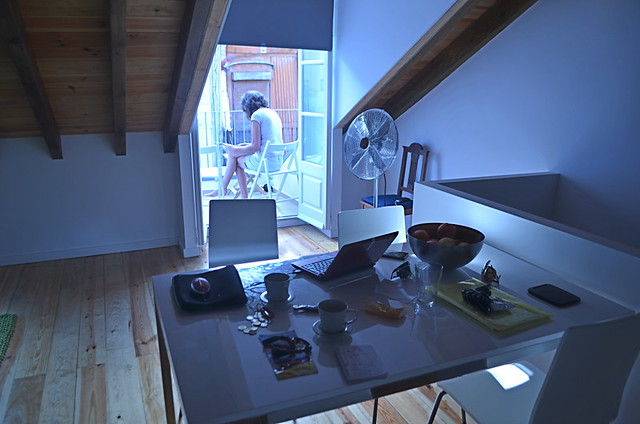 That night, after we’ve enjoyed an eclectic supper at André’s recommended venue of Estrela da Bica which is half way down our emblematic street with its yellow tram car whose portrait finds its way onto every memory card that visits Lisbon, we sit on our rooftop with a bottle of wine. It’s a hot night and as we chat we watch groups of drinkers beginning to gather in the street below. Silent, graffiti’d doorways that looked derelict an hour ago have lifted their shutters to reveal kaleidoscopic neon lights from which the mellow sounds of funk and soul are drifting into the night.

From our vantage point we can watch, unseen, like nuns in a lookout tower who tut at the debauchery below while making sure they don’t miss a moment of it. Except there is no debauchery. Just friends standing and sitting in the street, drinking beer from bottles and laughing with their mates. We finally drag ourselves away from the street theatre at 1.30am to go to bed, leaving all the apartment windows and the bedroom door wide open in the hopes of catching a stray breeze in the humid night. 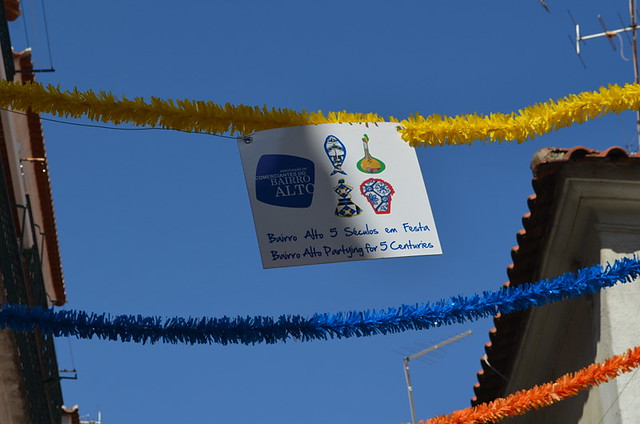 At 2.30am I’m awoken by an almighty racket and for a few moments I’m completely disoriented. I begin to analyse the noise and piece together where we are. The gentle sounds of mellow music have morphed into the steady pounding of rock music and the background hum of conversation has crescendoed into shout level conversastion in order to be heard above the music. It sounds as if the biggest party in Lisbon has decamped to our bathroom. For the next two hours we float above sleep and every time we begin to sink into it, a loud shout, a screaming laugh or a burst of spontaneous singing shatters the journey. When we finally drift off again the sky is beginning to pale.

The next morning we kick the plastic glasses and empty cigarette packets off the doorstep and join the trickle of old ladies heading slowly up Rua da Bica, weaving our way through the endless tourists photographing the street and the jaunty yellow tram that has resumed its daily groundhog trundle, up and down, up and down. 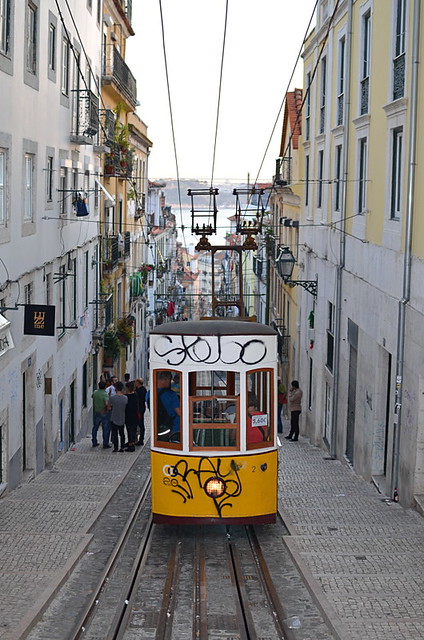 Most of the doorways are once again shuttered and silent. The ones that remained closed last night are now open, revealing groups of elderly men watching TV, drinking coffee over the morning papers or having their hair cut and their grizzled chins shaved. Only the cigarette and souvenir shop opposite our house bucks the trend. He was still open when we went to bed and he’s open now, his boards of fridge magnets and carousels of postcards decorating the pavement amidst the rubble of empty cans and cigarette butts.

At the top of the street we head into the pasteleria where middle aged women stand eating pastries at the end of the counter. We order soft, savoury, hot pastries and steamy, aromatic coffee and watch the tide of shoppers and tourists pass by the front door, occasional estuaries drifting in and out of the doorway, as we wait for the caffeine to kick in and dispel our lost sleep. 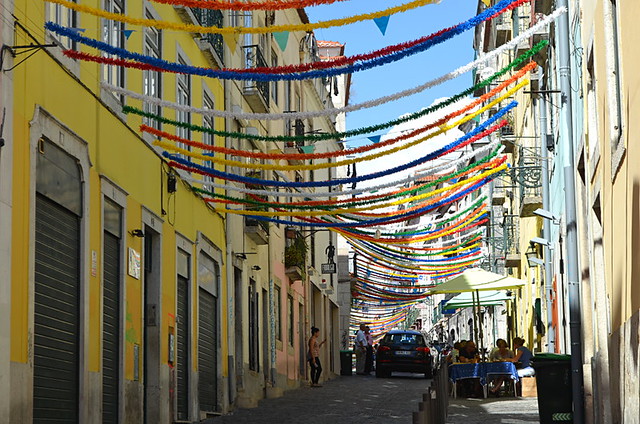 Spending the day joining the ranks of tourists taking in the city’s sights, by the time we get back to Bairro Alto it’s late afternoon and life has ebbed back into the street’s veins. Along its length, people are sitting outside doorways on wooden benches, reading books, chatting to their neighbours or enjoying a quiet beer in the late afternoon sun. After a short rest and a shower, we walk along the street and climb the steps to Miradouro de Santa Catarina where all the tables at the little kiosk are already occupied and the stone blocks below the statue are gradually filling up.

We take a seat on one of the blocks alongside a guitarist who is strumming gently and his friend who is rolling up beside him, and we watch as the sun begins its nightly composition on the canvas of the river and the city spread at our feet. A group of 20-something lads and one girl are playing football in front of us and the guy beside us has started singing No Woman No Cry as the aroma of marijuana drifts over the laid back gathering of sunset watchers and the world turns from pink to gold to black. 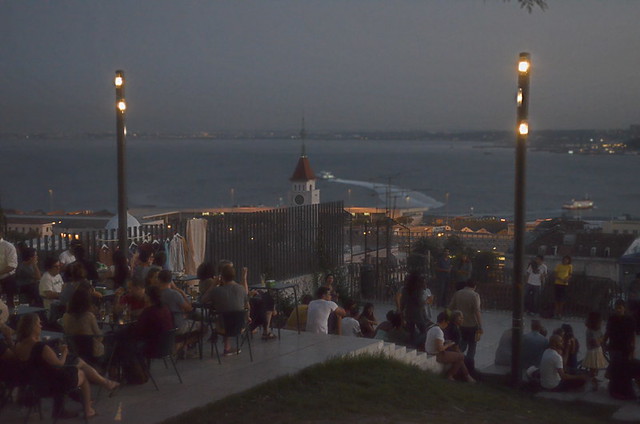 Turning our backs on the music and the twinkling lights of 25 de Abril Bridge and the pleasure cruisers drifting along the Tagus river, we amble through the bairro to the cosy, azulejos-tiled interior of restaurant 1 de Maio where we order two of the night’s specials and share a table with a group of visiting Canadian vegetarians who expound the nutritional value of our pumpkin, walnut and cinnamon dessert.

Passing enticing, contemporary menus and intriguing bars with psychedelic interiors and hipster clientèle, we return to our private, rooftop bar to watch the Friday night social drama unfold. When we finally collapse into bed at around 2am we close all the windows and doors and sleep through a blissfully tranquil night, completely cocooned from the noise of the party in the street below, to awake refreshed and ready to begin another day in beguiling Bairro Alto.

The Colours of Provence

Provence did not disappoint. She may have lost her lavender and sunflowers for another year but all that served to do was to focus the attention on the beauty that lies beyond her seasonal glories. […]