It is not a good night for smuggling in Alentejo. The nearly full moon bathes the land in a ghostly white light. I can see the clear, sharp outline of the hills around me. I can even see moon shadows cast by cork trees 200m away. Smugglers would be easy pickings for border guards on a night like this.

It’s easy to get caught up in imagined skirmishes with border patrols when paths lead into the hills all around us, paths that were used by smugglers plying their trade between villages and towns either side of the Portuguese Spanish border. The term ‘border country’ itself conjures up thoughts of an untamed land where life isn’t the same as elsewhere. And it’s not inaccurate. I can walk a few hundred metres up the hill and jump forward in time an hour. When you’re never entirely sure what country you’re in or what the time is it can be a tad unsettling. 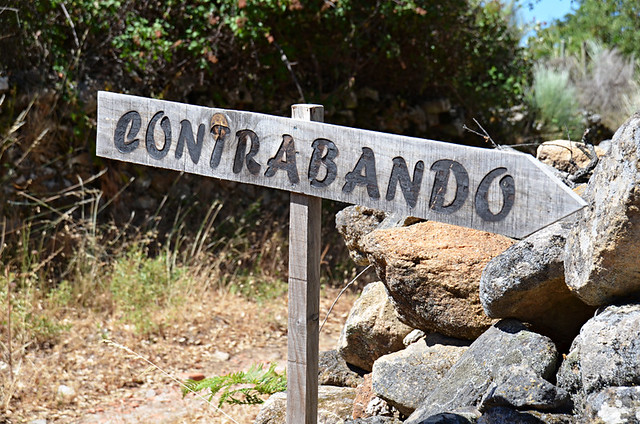 During the less atmospheric hours of daylight, we follow one of these trails, a rota de contrabanda do café, a route carefully tread by light-footed coffee smugglers. From the tiny hamlet of Galegos we climb a stony path which takes us past a flock of squawking azure-winged magpies into hills which mark the border between Portugal and Spain. In this place, between the 1940s and 1970s, two dictators, Franco and Salazar, erected a glass wall which caused suffering to the residents of both countries and which forced some to take up smuggling. These smugglers weren’t dangerous desperados, they were usually women transporting goods, albeit illegally, we now take for granted – coffee, food, sugar, medicines, fabrics, sewing threads, sausage skins. Basic essentials. 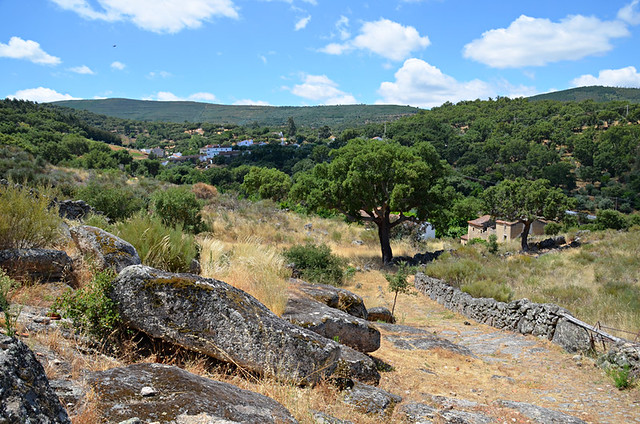 Take away the smuggling tag and the two dictators and what you have is a trading route of the sort which once existed between towns and villages all across Europe. Smugglers were more often than not ordinary people taking risks in order to survive. That’s not to say there weren’t those who exploited the situation. As well as everyday household goods, sometimes silks, furs, perfume and stockings made their way under the cover of darkness between the two countries.

Knowing this adds spice to the route, even in daylight hours and in the absence of border patrols. The first sighting of a wooden post with the word contrabando etched into it is quite thrilling, prompting thoughts about the people who walked these illicit paths, some of whom still live in the neat white houses dotted around these valleys. 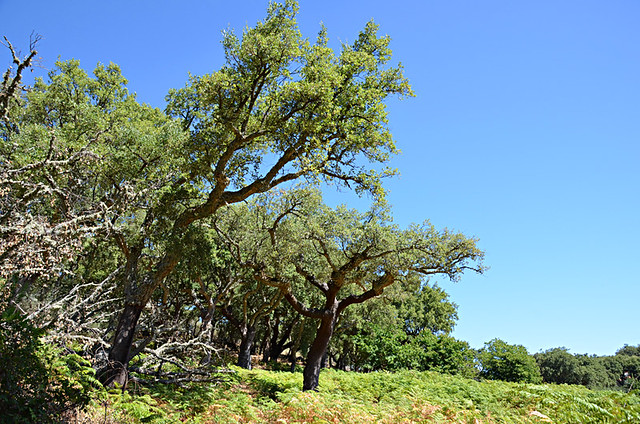 The path climbs through a cork forest, their trunks stripped of precious bark leaving them looking naked and slightly, but not unattractively, odd. Above our heads the blue magpies are replaced by bigger birds with colossal wingspans; vultures. A land of smugglers and vultures – Indiana Jones eat your heart out.

As we reach a ridge, the shaded path veers into the outskirts of a tiny hamlet. Beside a fountain are two stone basins with one side ridged for scrubbing clothes. They look as though they belong in the 1950s, but they’re clearly still being used. On a wall are two posters, one advertises a sardinhada (a small festival involving music, dancing and grilled sardines) the other a bullfight. We pass a small, pretty cottage where a woman hangs out her washing, her husband sits in a chair amongst pink roses, supervising no doubt. He bids us ‘good morning’ in what sounds like Spanish. I’m confused. 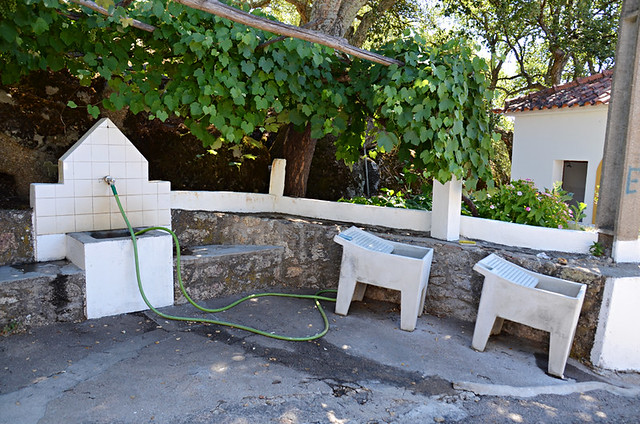 “Where are we?” I ask, embarrassed at having to seek clarification about which country I’m in. “Portugal or Spain?”

“This is Portugal,” he confirms… in Spanish. 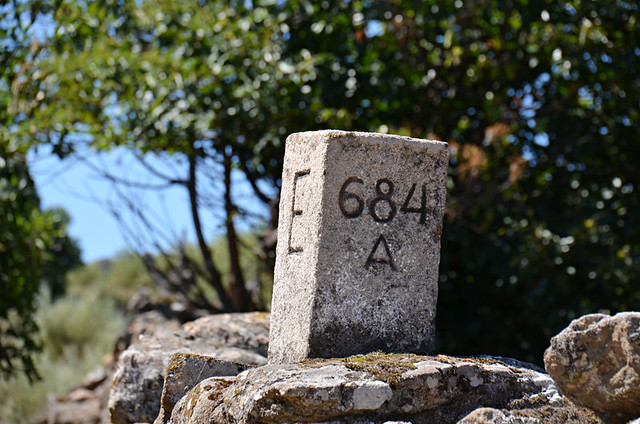 We continue on our way, passing more contrabando signs, before arriving at a crossroads where a notice warns us there are bees in the vicinity. A small, stone block atop a drystone wall with a P on one side and an E on the other tells us we’re about to step into España. Uncannily, with the change of country comes a change of terrain. In front of us, stretching as far as we can see, are sprawling wheat-coloured plains. It’s an immense landscape where not many people live. 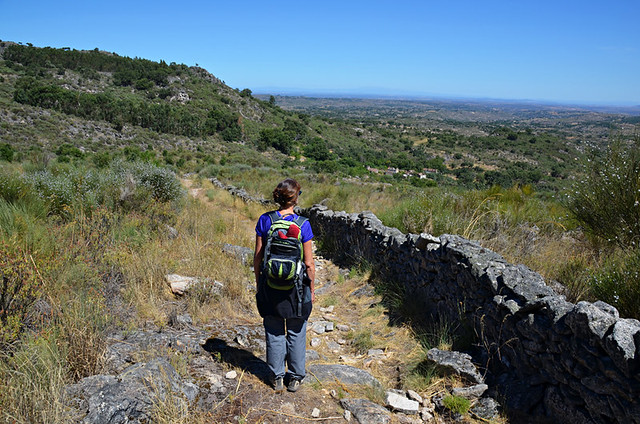 The only humans we’ve seen were the Spanish speaking Portuguese couple in the hamlet. There are animals though – sheep, goats, cows and a herd of stocky white bullocks who engage us in a staring competition. Their nerve breaks before ours and one of them freaks out, leading to a mini stampede. The herd takes off at speed, the noise of their hooves thundering across the dry plains reverberates around us. It’s an impressive sound. 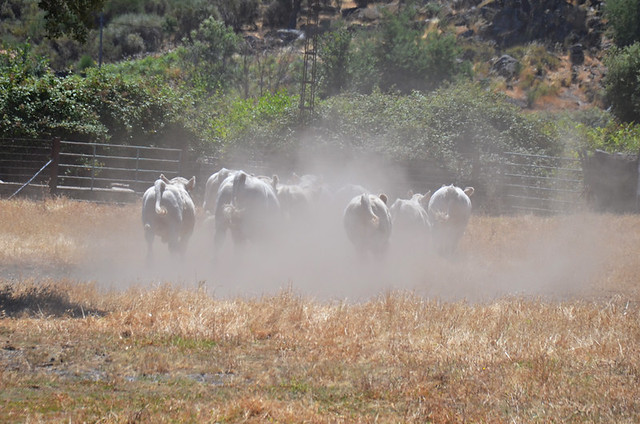 The path continues across a thirsty and rather epic landscape where there are little signs of civilisation. It could be unnerving if it weren’t for the fact we know it to be misleading. We’re not far from the end of our smugglers’ route and we know we should be nearing the small village of La Fontañera. Sure enough, our stony path breaks free from the wilderness to emerge onto a tarmac road. 500m later we arrive at the outskirts of the village. It’s a curious place, bigger than expected. There are no shops or bars, only a line of houses bordering one street; bordering being the appropriate word as the Spanish/Portuguese border lies right at its southern edge, marked by another stone block. 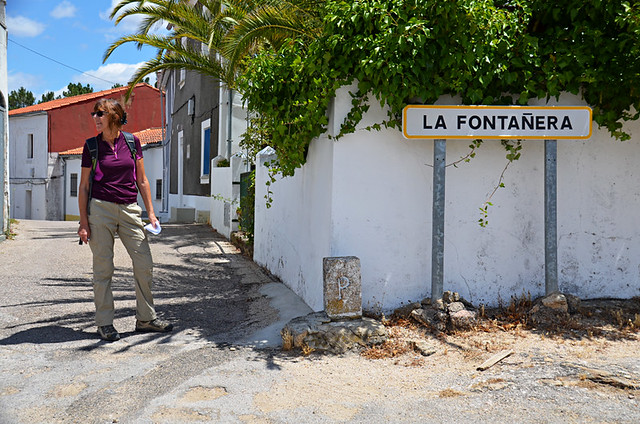 One rogue house lies on the Portuguese side of town, a footstep away from another country. Its existence provokes many questions; do the inhabitants speak Portuguese whilst the rest of the village speaks Spanish? Is there really an hour’s time difference between houses metres apart? Will the people on the Spanish side be watching the new season of Game of Thrones whilst the people in the Portuguese house stare across the border enviously? (Spain has HBO, Portugal doesn’t.)

A Visit to the Aldea Rum Distillery on La Palma

Don Manuel removes the cap from a bottle of Reserva 10 Años (10 Years Reserve) and pours two shots. I’m expecting to judder but the rum slips smoothly down my throat, warming and comforting. […]