We’ve visited various Greek Islands many times, but always for chill-out purposes. Sure, we’d explore at our leisure after spending a morning recovering from a previous night of too much ouzo by pushing out the Zs on some idyllic beach. But it was usually too hot for any serious exertion.

A springtime trip to Crete to spend three weeks updating walking directions involved plenty of paradise beaches, but mostly this time our interaction with them consisted of walking across the sand rather than getting prone on it. 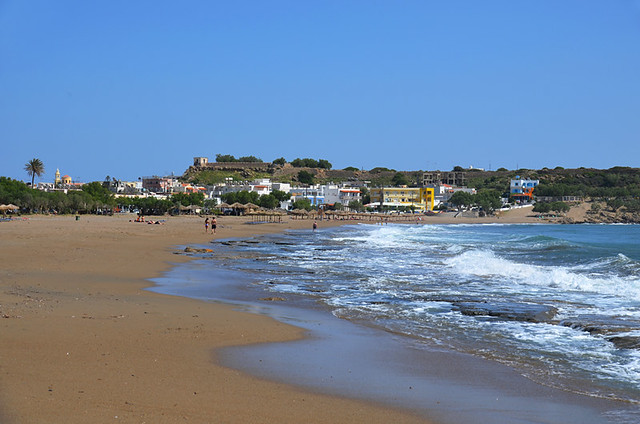 Walking from a single base
Our first week was spent near Kolymvari, exploring the north west area of Crete from a delight of rural hotel in the hills, the Elia. Paths meandered from the door through olive and citrus groves to pass sleepy hamlets, Byzantine churches and fields of bulbous artichokes. Where the immediate scenery was pleasant, the distant view was of the stunning, snowy White Mountains. Snow on the mountains whilst people sunbathed at the beach; I’d always thought Tenerife had been unique in having that combination. 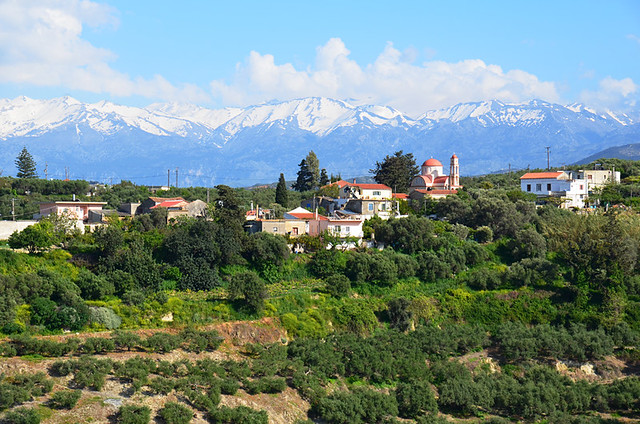 We already knew Cretan maps were of the ‘just a guideline’ variety but we didn’t know how well the island was organised as far as hiking was concerned. We soon discovered that, despite already having a relatively healthy hiking market, the answer was not very. Walking signposts were conspicuous by their absence, making the need for clear directions essential. We got briefly lost on our second walk, possibly by miscounting olive trees before a turn. 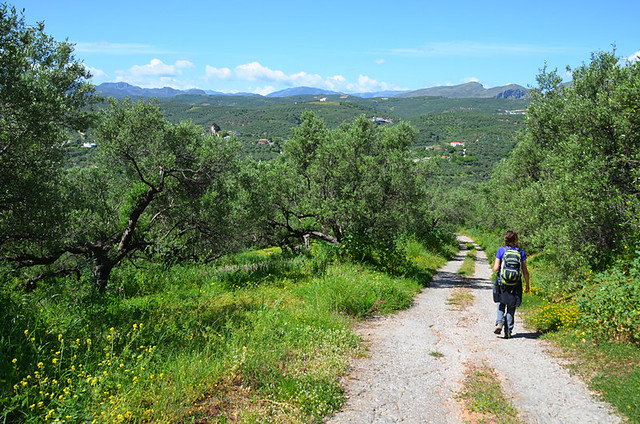 Gorge walks in the area were easier to navigate for obvious reasons. One involved passing aged olives with thick, gnarled trunks to follow a stream through a shady forest. Another ascended through Deliana Gorge, a favourite haunt with griffon vultures, to a musical cling clang soundtrack courtesy of goat bells. Sirikari was a particular favourite and involved walking from the ancient hill top city of Polirrinia to a tiny village where we bought a branch of deliriously scented oregano (we’re still shaking it into our food five months on). On a hill overlooking the gorge we ate a picnic of pastries and biscuits in a small cemetery where the breeze rattled the glass coverings on the tombs, making it sound as though the dead were keen to join our al fresco feast. 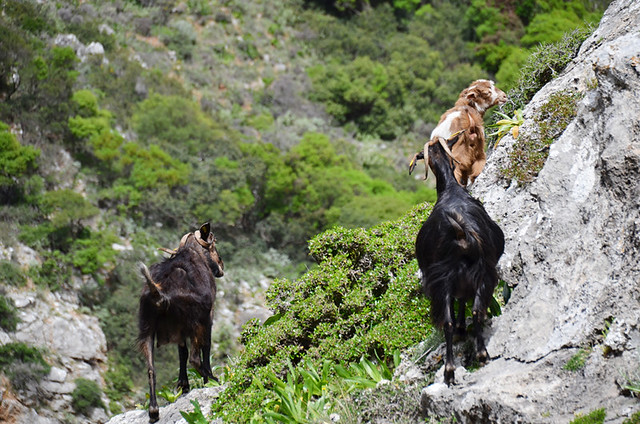 Walking across the west
After an easy week’s exploring it was time to move up a gear and get in some serious walking. Our starting point was a hotel beside the wonderfully wild sands of Falasarna, more or less empty in late April although the weather was in the mid 20s. 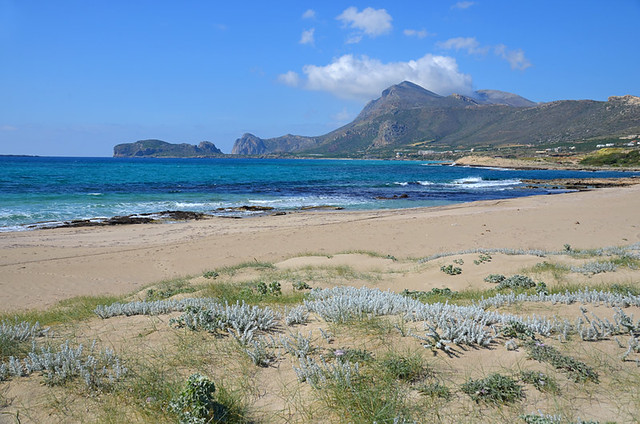 By then we’d gotten over the surprise of just how beautiful the west of Crete was. It has all those typical ideal Greek Island ingredients – picturesque fishing harbours with tavernas selling fresh seafood, long beaches lapped by calm turquoise waters, pretty towns of white cottages with intense blue windows and doors. But it’s also gloriously green; greener than any Greek Island we’d visited previously. 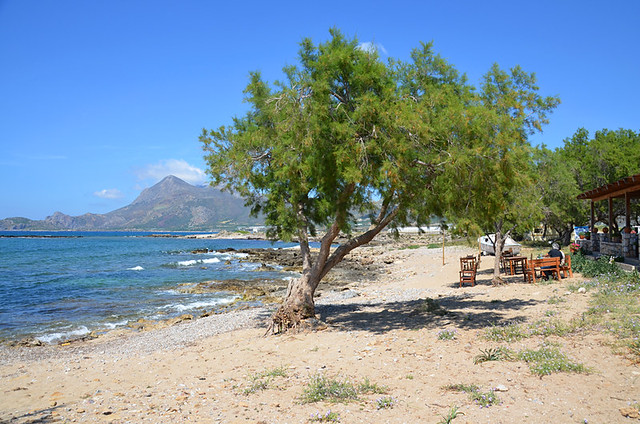 From a walking point of view seductive scenery is a must. But where Crete excelled was each route we followed also had quite different qualities with lots of additional points of interest. In Falasarna we parted thigh-length grasses to wander around the ruins of an ancient port. At Chrysokalitissa routes took us from a monastery perched on a rock to a sea lagoon surrounded by white sand with brightly coloured bee-catchers performing impressive aerobatics overhead. On one side of Sougia we descended into a valley cut into a cleft in the hills where there was once an elegant city and where the only way in was on foot or by boat. On the other side of Sougia we scrabbled up a barely discernible path in search of a cave which was said to be home to the mythical Cyclops. 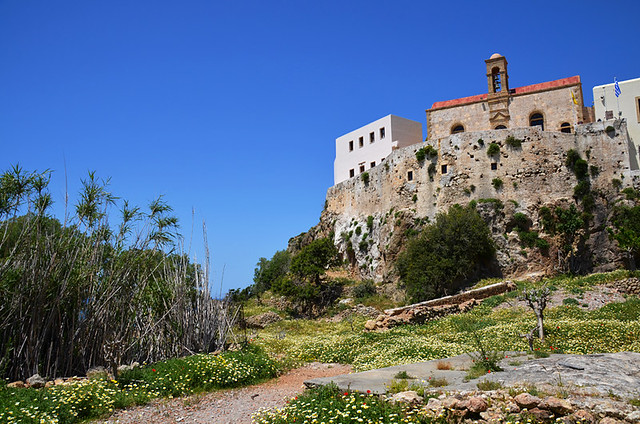 Beach walking
And then there were the beaches. Sun worshippers visiting Crete make pilgrimages to Elafonisi, but the western and south western coast is peppered with postcard fodder – sparkling bays, hidden coves and sweeping white sand crescents. Most were completely unpopulated; getting to them is no stroll in the park. There are times we could have walked barefoot on the sand, but there was also a fair amount of scrabbling across boulders. Additionally, steep descents into perfect Greek beaches usually meant equally steep ascents out again which made for satisfyingly challenging walking. 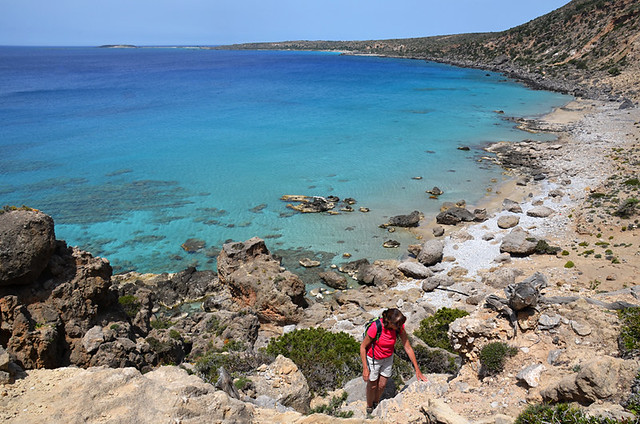 The E4 path meant coastal routes were better signposted than inland ones i.e. there actually were some signposts. But they could go missing now and again. On one occasion as we took time out on a beach for an energy bar, we watched a fellow hiker struggle to find a path out of a bay. Having watched his painfully slow progress from afar we were apprehensive about tackling it ourselves. But having seen him go wrong we were more wary of the path and spotted where he’d been misled. Subsequently our climb wasn’t anything like as arduous as our fellow walker’s. 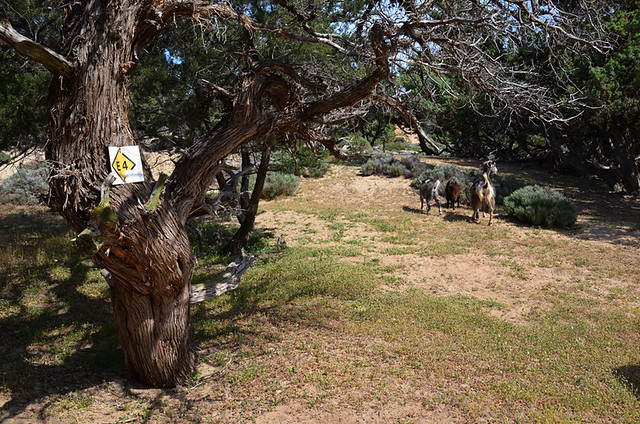 Our final walk was through the Samaria Gorge. Crete’s most famous route was a spectacularly fitting way to end our exploration of the west of the island on foot. It was also the only time we encountered other walkers in any numbers. 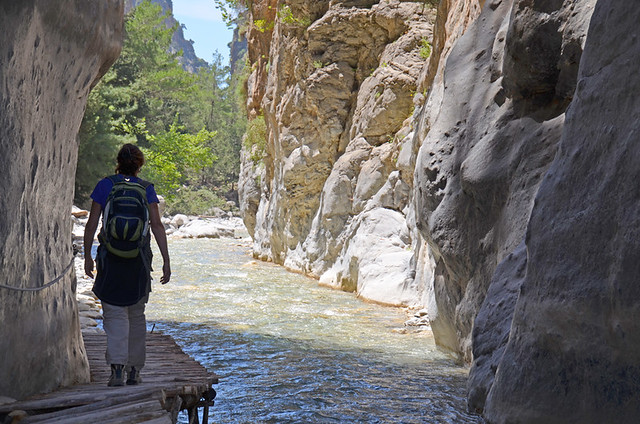 Walking on Crete was somewhat of a revelation – it was far more diverse and even more beautiful than we’d imagined. There is, however, a distinct lack of walking infrastructure and the Cretan Tourist Board are missing a trick there. But there’s a massive upside to that. Apart from the better known routes, most trails were quiet. The lack of waymarking meant there was a real sense of discovery, a feeling we were treading paths which still haven’t made it onto the mainstream hiking radar yet.