This is not a sentiment that many in Britain will be able to relate to, but by the time November arrived in Portugal we were praying to the weather gods to bring a sweltering summer which had outstayed its welcome to an end. On 27 October I made the mistake of putting on a pair of socks as we toddled out for our traditional Friday lunch in Setúbal. We sat outside on a terrace overlooking the small white strip of sand at the town’s beach, hugging the shade of an umbrella. Even then it was too hot and I had to discreetly (I hope) remove my socks before my feet exploded. 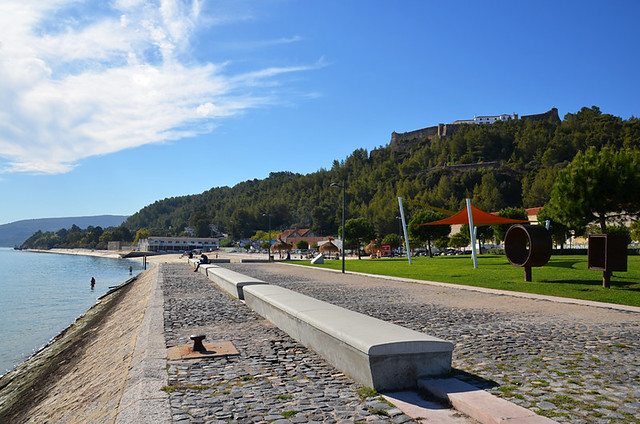 With November came a drop in temperatures, thankfully for a couple of reasons. The parched earth desperately needed a break, plus we were due to head south to the Algarve for a week’s walking. When I say the temperatures dropped, it’s relative. Instead of 30C they fell to just below the mid 20s. Still good for sunbathing, and ideal for warm winter walking.

We’d stayed in the Algarve once previously, for my sisters’ birthday in July. Whilst it had been a fun time and I didn’t dislike it, Albufeira wasn’t the sort of place we’d normally choose to stay – more resort catering for a mass market than traditional town. As a result, I can’t say the Algarve trip was one I eagerly anticipated. But as our friends and colleagues at Inntravel have a couple of Slow Travel holidays in the region, we knew the Algarve they were sending us to was not going to be one of karaoke bars and British brekkies. In that respect I was intrigued. 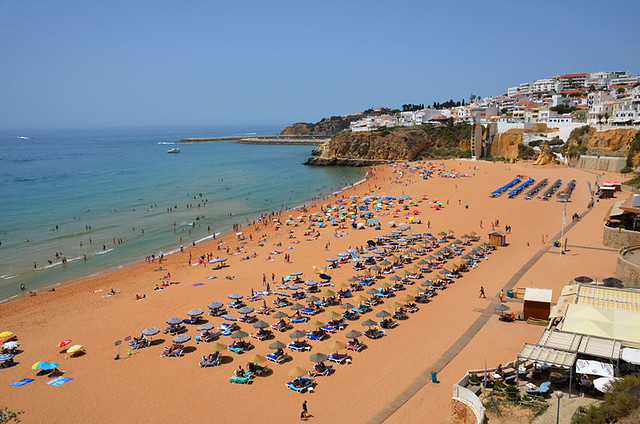 Sure enough, long before our week was up my preconceptions about the Algarve had undergone a complete reboot.

Although our remit included visiting towns and checking a handful of inland walking routes, I’m focussing on the coastal areas we explored for one specific reason – Portugal’s south and south west had us as wide-eyed as characters in a Japanese anime movie. 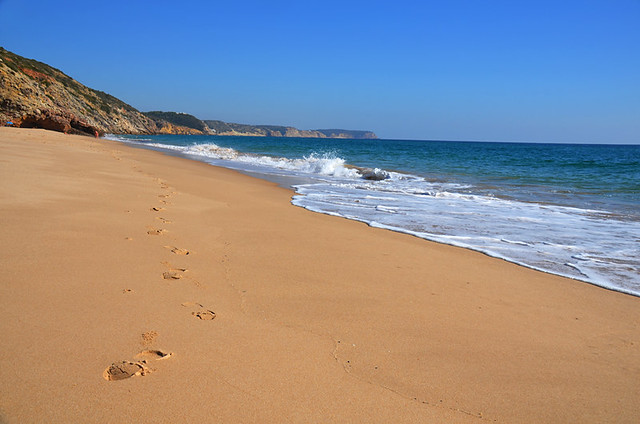 Our first route was only partly coastal. We connected country paths from the traditional village of Figueira to reach the near deserted and quite expansive sands of Praia das Furnas. Despite temperatures which would have northern Europeans stripping everything off, there were only a handful of sunseekers on the beach – a few neo-hippies (a ubiquitous ingredient on any Algarve beach with a car park nearby) and a couple of northern Europeans who’d… well… stripped everything off. Although it was an impressive opener it was a mere taster for what was to follow. Our route took us across red soil paths to stand on cliffs looking down on an even more beautiful bay, lapped by the sort of deliciously turquoise water which fools you into thinking its touch will be warming. We were roused from our entrancement by an English couple who joined us on the clifftop, sharing a bag load of useful tips compiled over 30 years of walking visits to the Algarve. They immediately identified a plant with glistening, sticky looking leaves which gave off a wonderfully perfumed and distinct scent – cistus.

Not quite Seven Hanging Valleys route 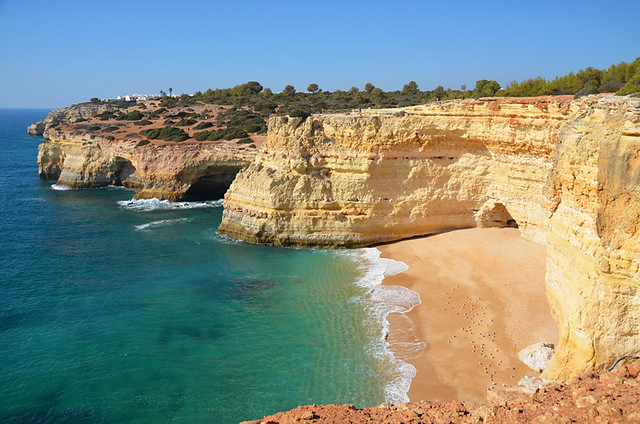 If one route showcases just how incredibly delectable the Algarve coastline can be, it’s the Seven Hanging Valleys. We joined it at Benagil, heading east along the cliffs. Benagil was once a small fishing community where octopus was the main catch. It’s still a small community but now it exists more as a tourist beauty spot where people catch boats to get a better view of the area’s sea caves. The coastal route is a popular one, deservedly so as it winds along the cliffs through wild thyme, rosemary and fennel skirting cove after cove, some accessible only from the sea. Sheer cliffs and soft sands compete for the title of ‘most golden wonder’ whilst the sea with its soft azul shades provides an inviting contrast. It’s unlikely anyone would grow bored of encountering one idyllic cove after another but just in case they did, both sea and wind have combined to sculpt arches, caves and abstract formations so that no two Midas-touched scenes are the same. 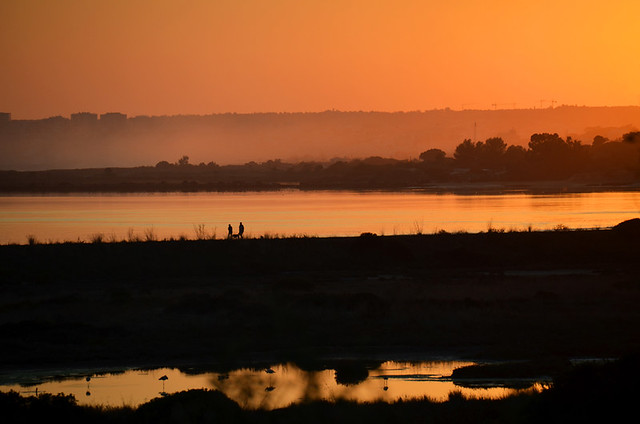 A complete contrast was a low-level short but quick-paced stroll around wetlands beside the Alvor Estuary, racing against a sun which had slipped into third gear in its bid to reach the horizon. Twilight’s soft light created another golden world, this one more of the stuff of warm and fuzzy dreams. The magical surroundings put the brakes on our pace, so what if darkness fell and were were miles from our car? A gentle light falling on mirror surfaces broken only by the deliberately slow gait of long-legged curlews, stilts and exotic flamingos created a natural canvas that demanded to be digested oh so slowly. It might have been one of the shortest walks we enjoyed during the year, but it was one of the most memorable. 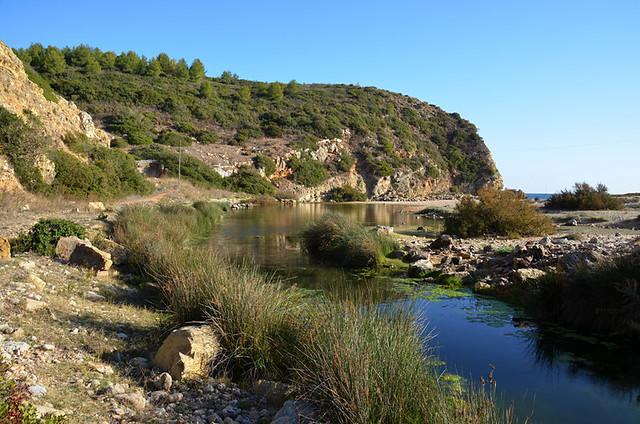 As a starting point for a walk Luz didn’t charm me. It felt more like the Algarve of my preconceptions; bars with English pub names and menus and the sort of cookie cutter villas that people on A Place in the Sun opt for after dismissing the wonderfully individualistic and charming traditional places they’re shown. But as we travelled west we quickly left Luz behind, replacing it with a rugged landscape of spiny cactus and agave spikes before arriving at the more traditional and picturesque Burgau and then a lone and stylish restaurant on a beach, Cabana, where we paused for lunch. Admittedly it was fish and chips (in a vodka batter), and it was delicious. We could easily have frittered away the afternoon there. However, our route continued, the landscape softened by the green of spurges, junipers and pines before we descended to a peaceful flat valley, split by an estuary, where sheep and goats tugged at long grasses. 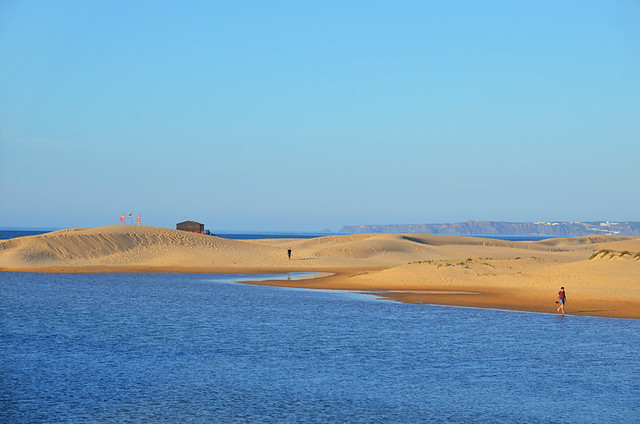 Where our south coast routes were characterised by the postcard fodder of scenic coves and pretty beaches, the one west coast route we walked revealed sandy scenes which were more epic, some of Lawrence of Arabia proportions. Amoreira, our starting point, was a huge beach and a surfers’ haven. We climbed away from the beach to cross a sandy plateau of low shrubs, lone farmhouses and stone pines whose umbrella-shaped canopy has to be about the greenest of any tree I’ve seen. Our route ended at a steep staircase made from recycled plastic which took us to the wild curves of Carriagem, a beach with a mix of white sand and hard volcanic rocks. As an add-on we stopped for a short explore of Praia de Bordeira, more small desert than beach; the sort of place where you might need directions to find your way to the sea. A finger of an estuary splits one side of the beach, creating an inland lagoon which adds to the exquisite beauty of the place. 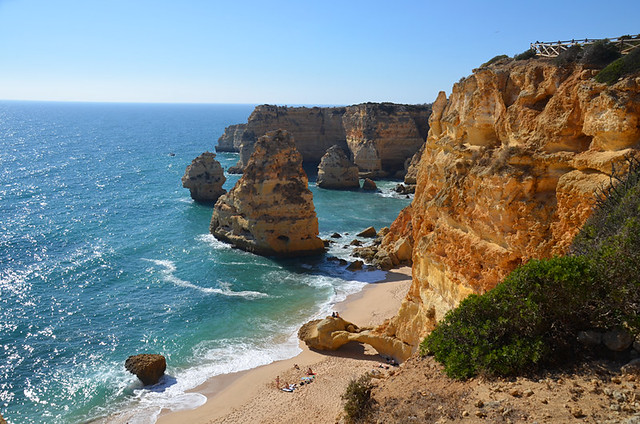 It’s this Algarve that attracts a more Bohemian type of traveller, as well as those who enjoy feeling the warm kiss of a friendly sun on their face during winter, but in a variety of settings which reflect the real nature of this part of Portugal.