Preconceptions. No matter how much I try to whip them into a corner of my mind, they sneak through the defences and whisper quietly to my dreamy subconscious.

What did I expect from the Island of Wolves (Isla de Lobos) lying two kilometres off the coast at Corrralejo on Fuerteventura?

Not wolves for a start. But I did expect it to be a beach paradise populated by bikini and Speedo wearing refugees from the resort across the water.

Why? I had absolutely no information to suggest that would be so… apart from those whispering preconceptions.
The island lay opposite one of the biggest beach resorts on Fuerteventura, therefore it would be an extension of that. Right? Wrong.

First of all there’s the obvious. Corralejo is famous for its sea of golden sand dunes stretching for miles along the coast. When you’re a sunseeker and you’ve got that, why travel to another island for more paradisical beaches?

Secondly, the Isla de Lobos isn’t a beach paradise at all.

I’d been expecting Fuerteventura’s version of La Graciosa. Instead what I find is a microcosm of Fuerteventura itself; a surprising and fascinating little island which is beautiful, quite surreal and a bit of a curiosity. 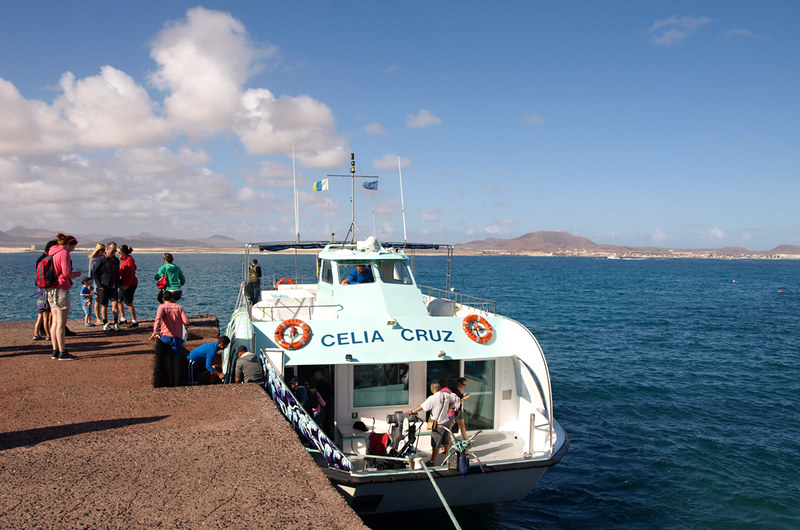 The boat journey takes about fifteen minutes, it’s not as big a craft as I expected and there are only about thirty or so other passengers.

As soon as we disembark at the small harbour on Isla de Lobos, three paths leading in different directions through craggy, ebony lava help dilute our numbers immediately. 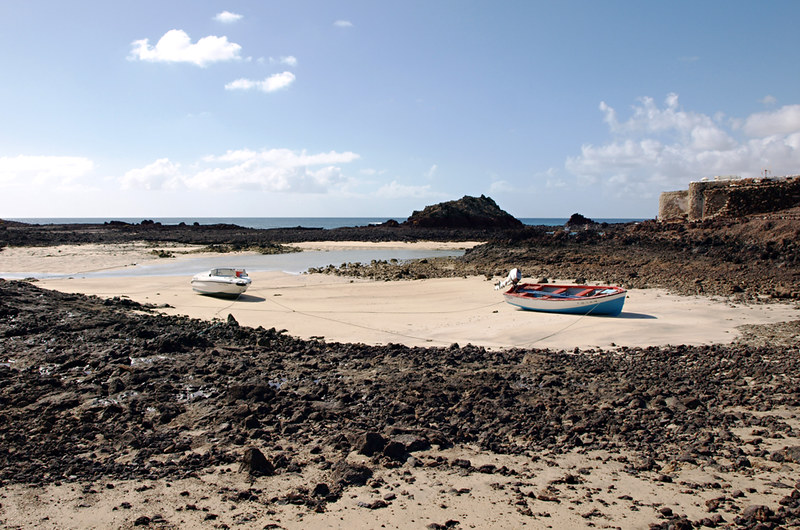 For some reason we choose to walk anti-clockwise, quickly coming to the only village (a grand term for a collection of stone cottages), El Puertito. The village boasts a ‘restaurant’, a dark hole in a wall from which a disembodied hand dispenses bottles of water and snacks. 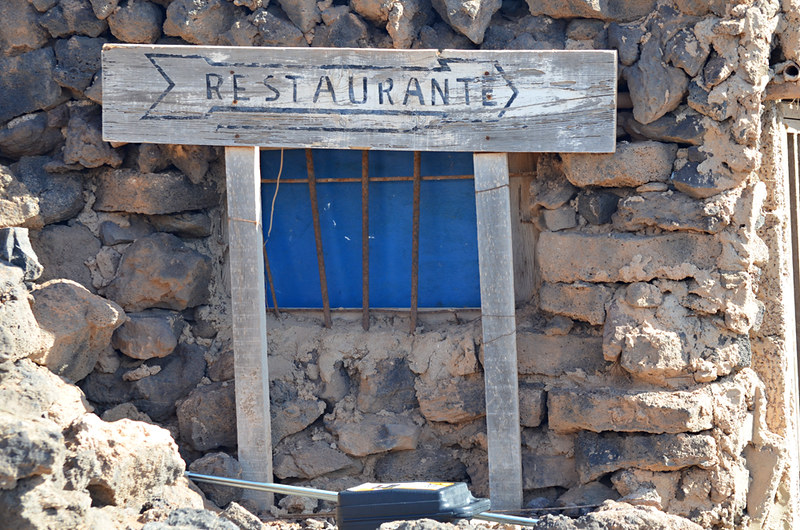 A handful of fishermen live in El Puertito during winter months, their numbers boosted in summer by local families from across the water. As we stroll through the ghost village, we spot one resident scrabbling at the rocks beside a turquoise lagoon bordered by lava and golden sands. In the centre of the lagoon another man casts a net from a midget fishing boat. 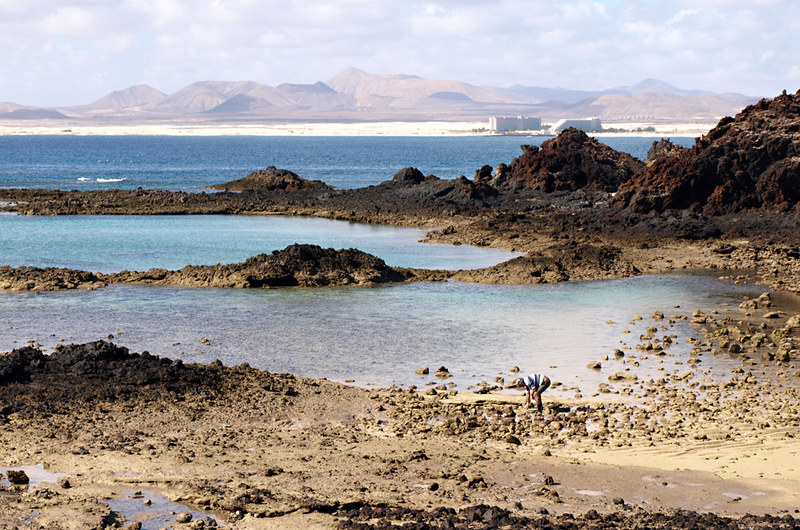 Beyond them, across the water on Fuerteventura, we can see a stark, hotel building, breaking up the golden dune sea. It looks ugly and out of place, especially when contrasted against the simple scene in the foreground. 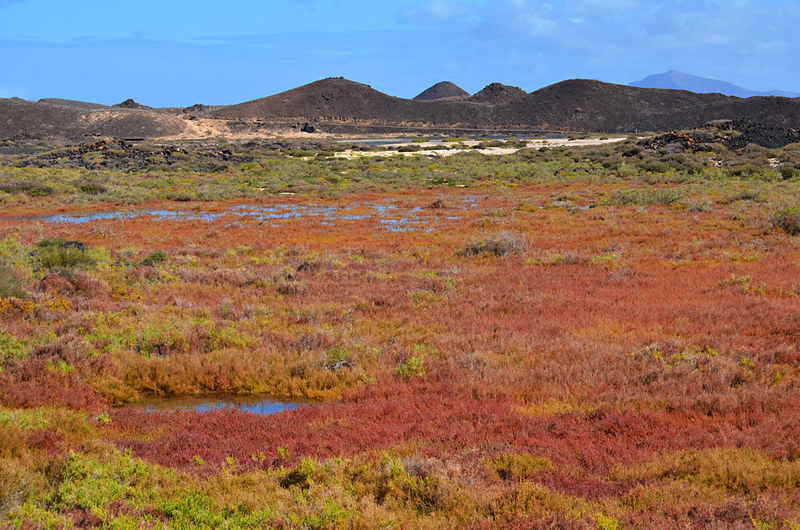 The path continues around the island, the scenery changing as we walk. Flat salt marshes and inland pools replace the lava, low siempreviva bushes add splashes of pink and mauve to the terrain. The salt marshes morph into soft dunes and we pass abandoned huts before reaching a wind-blasted faro (lighthouse) built in the 19th century. An information board informs us that as well as the lighthouse keeper and family, cattle were also housed here. The buildings are locked up, but its walls provide some shade from the sun whilst we gaze back across an odd yet compelling landscape. 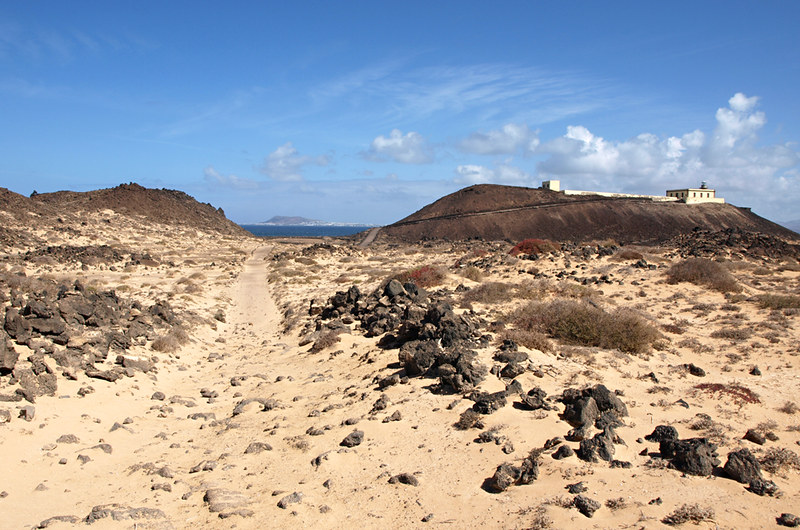 From the lighthouse, our route dissects the island, leading to the base of La Caldera de la Montana. As we’d spent the previous 11 days climbing volcanic cones and hills and time is short, we decide against climbing it and instead continue on our circumnavigation to reach salt pans beside a Chicago windmill. The once white pans are now just red, cracked-earth basins. 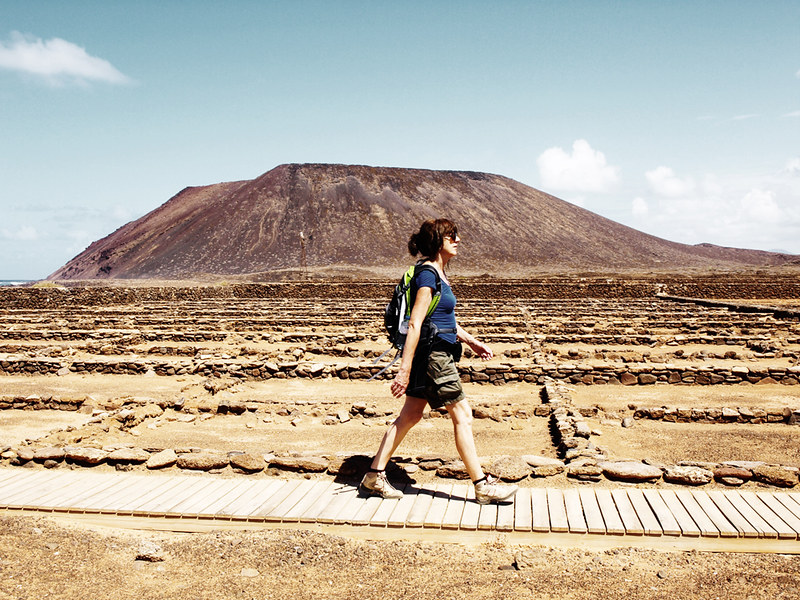 Beyond the salt pans is the sort of scene I had expected from Isla de Lobos – an azure, lagoon-like inlet circled by soft, golden sand; a paradise beach. A handful of people must have headed straight for the little sea lagoon, but nowhere near as many as I had expected. 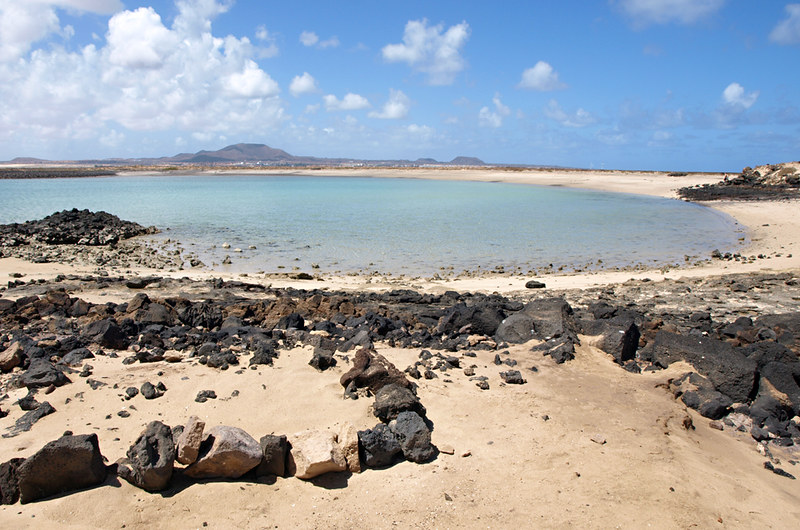 Something on the other side of the bay catches my eye. Seals.

Isla de Lobos was named after the population of seals that inhabited the island; lobos marinos in Spanish, monk seals to English speakers.

A family group bask on the sand near the water’s edge. I reach down and lay my hand on one. The seals are cold to the touch; stone. 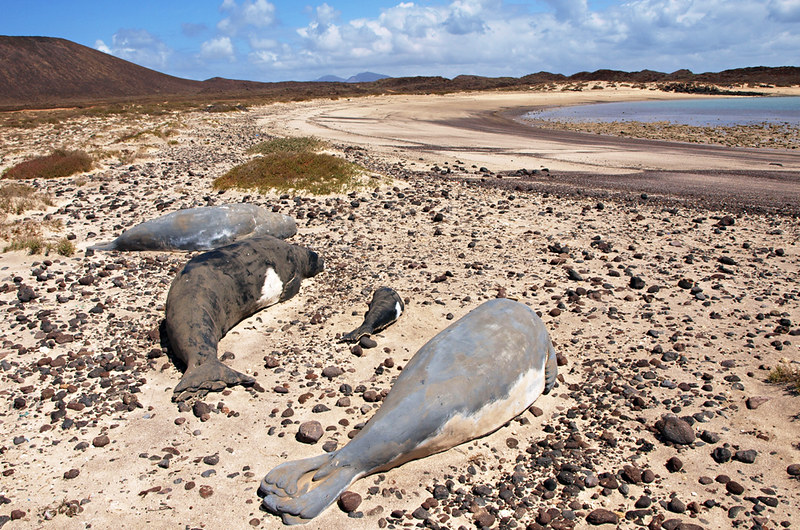 There are no lobos marinos left on the island, they were all killed by conquistadors and settlers long, long ago.

I run my hand across the back of one of the sculptured seals and a sadness engulfs my body, taking me by complete surprise. Isla de Lobos is still an incredible place, but what an island this must have once been.

I could cry for the lost lobos.

On the Sculpture Trail in Puerto del Rosario, Fuerteventura

I like Puerto del Rosario. It’s got an honest, relaxed workaday charm. And it boasts a couple of beaches, with Playa del Pozos filling the role of an attractive… […]