I saved my biscuit just for him. I know I shouldn’t encourage him, but he’s unbelievably cute and his gentle touch on my finger as he reaches for the packet, melts my heart. 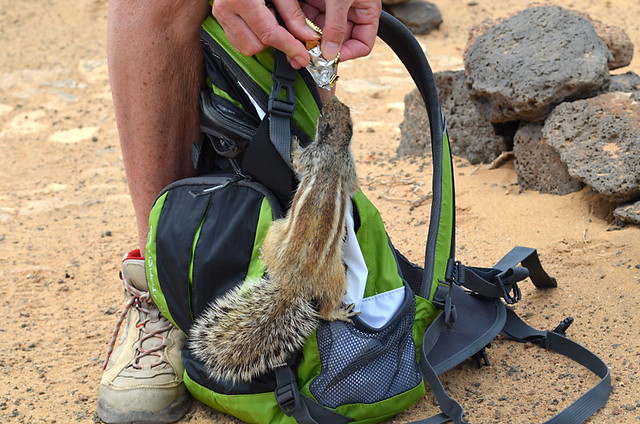 But then the gentle caress turns frantic and he grabs at the biscuit and tries to wrest it from my hands. Not content with the small bites I’m offering, he tugs hard, his nails digging into my hand as he levers himself for better balance. With a force that completely belies his size, he wrenches the entire packet from my hand and races off with it, leaving me feeling mugged, and in fits of giggles.

We had first been alerted to the presence of my mugger and his pals on Fuerteventura by a very helpful girl in the Tourist Office in Puerto Del Rosario who had told us that we could go to a particular viewpoint to see the “skweerels”. Baffled by what she could possibly be alluding to, we had included her viewpoint on our road trip itinerary and arrived to find coachloads of visitors leaning over a guard rail, feeding crisps to what looked like a miniature army of chipmunks that were scurrying up and down the cliff with their spoils. 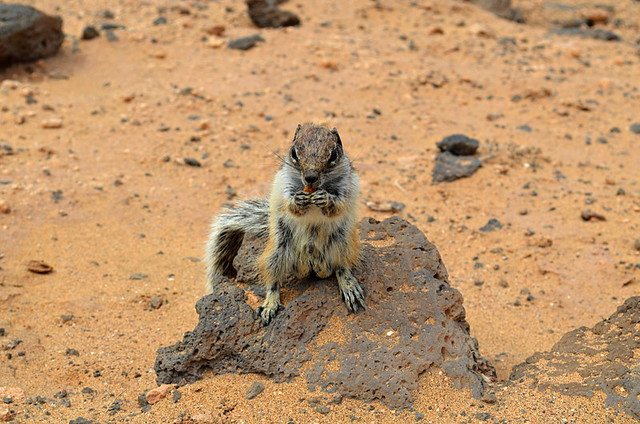 The chipmunks turned out to be Barbary Ground Squirrels (skweerels) and on our next visit to the island, when wheels were traded for hiking boots, everywhere we walked we spotted fluffy tails and blurred stripes disappearing into rock crevices at the speed of light, like cartoon phantoms at the edge of our vision. And whenever we found ourselves in locations favoured by regular coach tour stops, they congregated in gangs, eager to get their share of the spoils from the island’s tourism industry.

Not indigenous to Fuerteventura, the Barbary Ground Squirrel was first introduced from Africa in 1965 and unlike the island itself which was unable to adapt to the intervention of man who sacrificed its Monteverde forests to construction and the seeds of its regeneration to the prevailing winds, the squirrels adapted beautifully to its new home. From a single pair that was carelessly allowed to escape, their numbers are now thought to be in the region of 300,000 and rising. 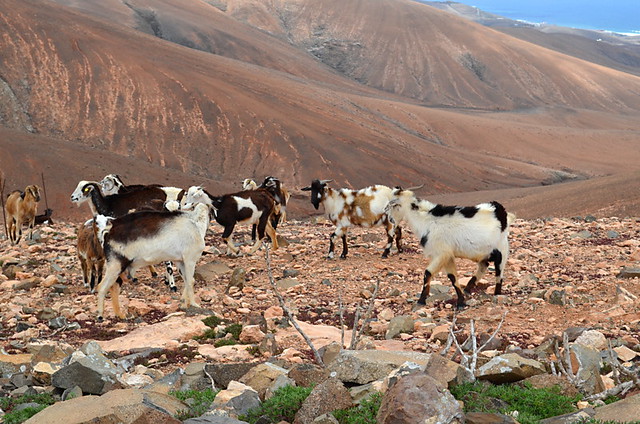 The day after I was ‘mugged’ by my squirrel, we were hiking to the Los Molinos reservoir, the largest body of water on Fuerteventura, and as usual our steps had been accompanied by the sight of goats, hundreds of them. On our return route we had to skirt the edge of a field in which 20 or so goats were clearly awaiting the call to come in for supper and, seeing us, they thought we were the new emissaries. Nervously at first but with increasing confidence, the goats tracked our progress on their side of the fence, their little faces growing ever more eager as we approached the gate to their compound at which point, we veered off through a turnstile.

The disappointment was palpable. So much so, that small scuffles and mock fights broke out. I felt guilty all the way home. 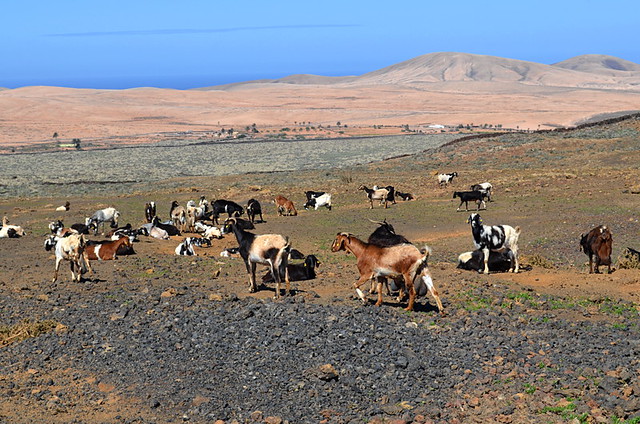 Some of the most handsome goats I have encountered, and I’ve encountered quite a few since moving to the Canary Islands, the Cabra Majorera goat is bred as much for its milk as for its meat and skin, and produces the island’s award winning, Maxorata goat’s cheese. As fond of Fuerteventura’s arid climate as the thousands of saddlebag brown, naked sunbathers who frequent the island’s endless white sands, the Cabra Majorera is perfect for the island. The males sport handsome goatees and the females produce high milk yields. Unlike the Barbary Ground Squirrel, goats have been a feature of Fuerteventura as long as man has, arriving with the island’s first inhabitants as far back as the first century BC.

In the Jandia Peninsula on the south tip of the island, thousands of goats still live and breed in the wild, rounded up twice a year at a goat rodeo known as the apañada, and herded into a huge stone corral known as the Gambuesa. The most virile males are presumably congratulated and the rest are castrated to control population numbers; new kids are branded and the herd is checked for its general health. It’s also an opportunity to cull the aged and sick and to gather sacrifices for the altar of fiestas. Life and death, ritual and tradition. 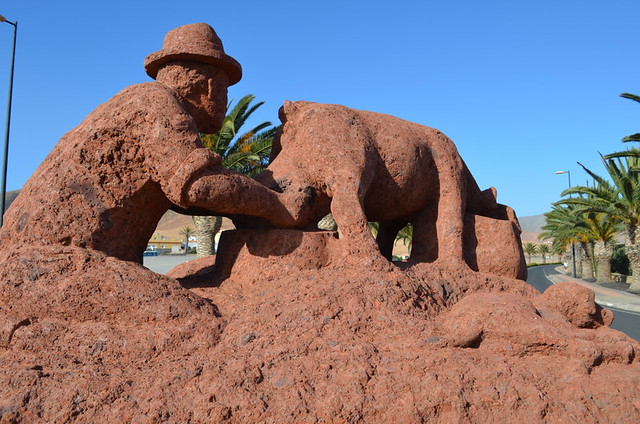 When the Spanish conquistadores first arrived on Fuerteventura in 1402 there were already in the region of 60,000 goats on the island. Today there are around 140,000.

The human population of Fuerteventura is 106,456.

To spend time getting to know the contours of this, most African of the Canary Islands, is to spend it in the company of bearded goats and Barbary squirrels who’ll mug you if they can.