Ahead of us, behind a wavering heat haze of a curtain, sheer cliffs guard the coastline as far as we can see. Clinging to the bottom of them, like a nervous interloper, is the path that’s going to take us from Cruzinha to Ponta do Sol on the Cape Verde island of Santo Antao. 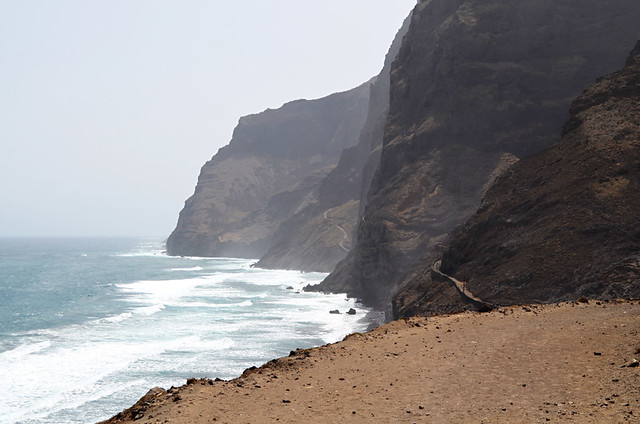 It’s not going to be a casual seaside stroll.

In reality the stone path is sturdier and wider than it looks from a distance. Like all the paths we’ve travelled on the islands it’s a solid, well built affair. 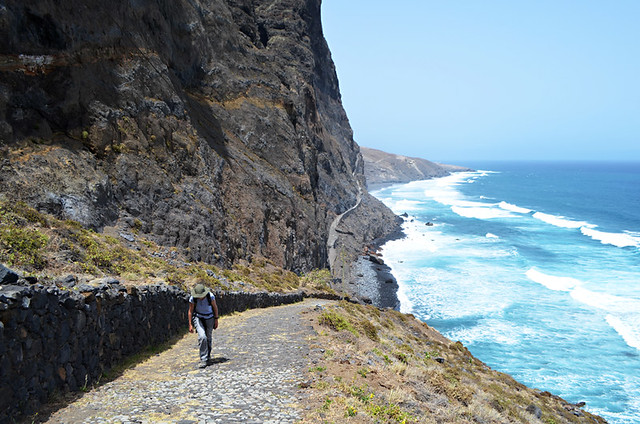 Although it undulates along the base of the cliffs, the flat surface makes for relatively easy walking. We make good time even though we stop regularly to scan the sea looking for brown discs in the surf; turtles coming up for air.

We pass a sweet looking purple and white flower; a blast of colour against the slate cliffs. I lean forward for a sniff.

My nose hits the emergency breaks. I don’t really need to know if it’s perfumed or not. 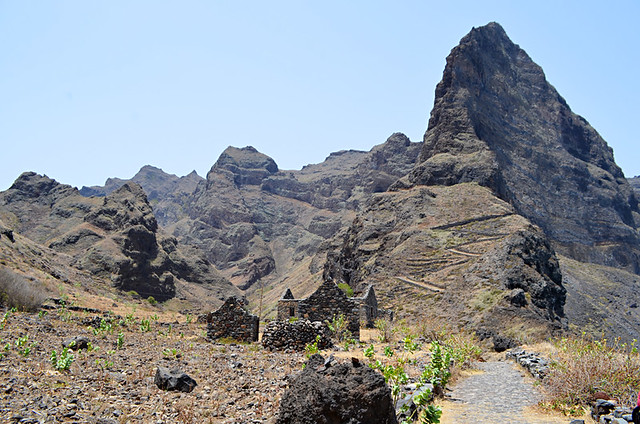 It’s a hard landscape. Bleak but dramatically beautiful. The path opens up at a small abandoned settlement with a handful of stone cottages. They’re decades old and their thatched roofs are long gone, but the buildings are in such perfect condition they could have been constructed yesterday.

As we walk, Nicolai regales us with tales of the sea and shark fishing. By the gleam in his eyes it’s easy to see his heart lies out on the Atlantic, even though one story involves a friend who tackled a shark bigger than his boat, resulting in a marathon battle that ended with the shark defeated. Such was the ferocity of the fight the price of landing his prize was a broken back. 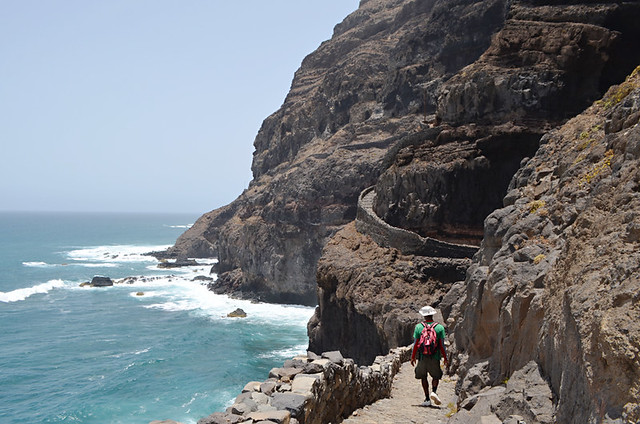 We meet only a handful of people on the path; a man carrying straw on his head and another guide with two hikers; a Swiss couple we met at one of the guest houses we stayed earlier in the week. There aren’t many walkers in Santo Antao in May so you tend to recognise people when your paths occasionally cross. It’s quite comforting and slightly surreal to bump into someone you ‘know’ in a remote part of an African island.

In perfect timing for lunch we arrive at a coastal settlement where a cloth covered table on a ramshackle terrace overlooking the sea awaits. We’d never have identified it as a restaurant in a month of Sundays; one of the benefits of having a local guide with us. 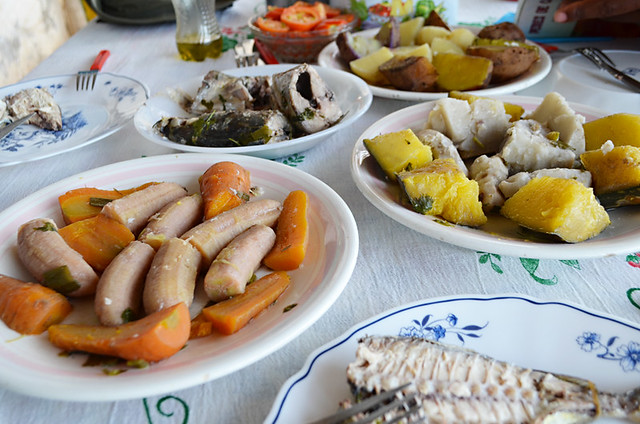 The owner is the spitting image of Cape Verde’s most famous singer, Cesária Évora. She’s clearly miscalculated how many of us were due to arrive as the food she lays in front of us is too much for a large group, let alone three people. There are plates of sweet potato, courgettes, tomatoes, fish soup, chunks of scad fish, ordinary potatoes, carrots, boiled bananas, rice, savoury onions, yam and manioc. It’s a ridiculous amount of food.

We try our best, but hardly make a dent. Our hostess play-acts offence at our poor show and we plead that if we eat any more we’ll need to sleep instead of walk. This doesn’t deter her.

“We have a room,” she points to a darkened doorway. “You can sleep in there.” 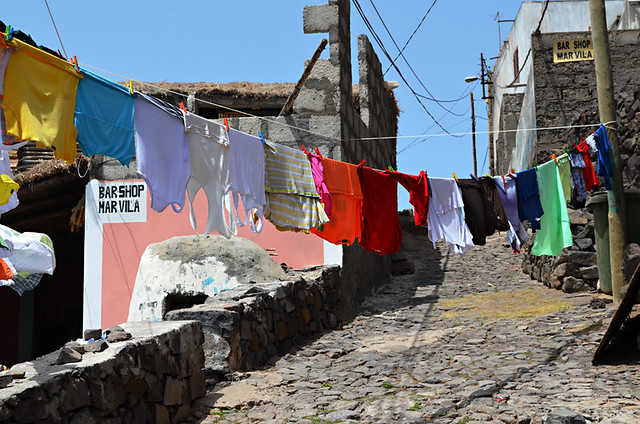 With over-filled stomachs we leave our generous hostess behind. Nicolai assures us the leftover food won’t go to waste.

Ahead we catch our first glimpse of Punto do Sol, there are still a few cliffs and ravines between us and the town where we’ll spend the night.

One ravine hides another small settlement of a few houses (one with ‘cold drinks’ painted on its flat roof) backed by narrow terraces. The hamlet has a rough football ground where the rule book is usually discarded, teams being made up of whoever turns up to play. The best goalkeeper is the hamlet’s one-legged barman. 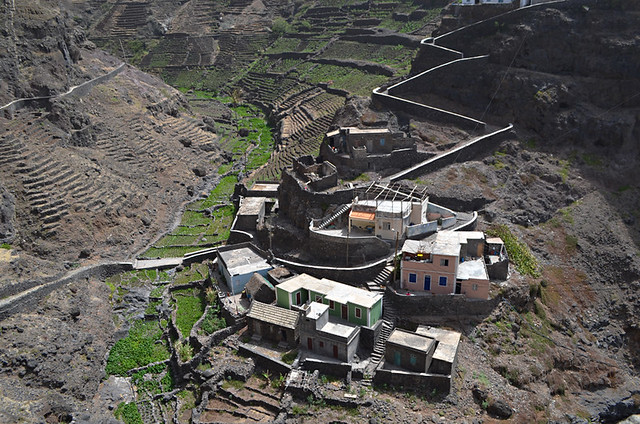 It would be nice to pause at ‘cold drinks’ as we have a steep ascent ahead, but time is marching on and so must we. In the mid-afternoon sun, the winding climb past stations of the cross is a tester, the numbskulls in my head furiously baling out salty water to ensure I don’t drown in my own sweat. If there’s even a bead on Nicolai’s face I can’t spot it.

As I reach the summit, a slightly cool breeze wafts across my face; a delicious and welcome reward. I take a few moments to catch my breath before I’m able to fully appreciate views of Fontainhas, a  village of pastel coloured houses perched on a narrow ridge. It’s civilisation of sorts and one of the island’s tourist draws. To get there we descend and then climb again, prompting another cool down in the shade of a tree in the village’s main plaza. 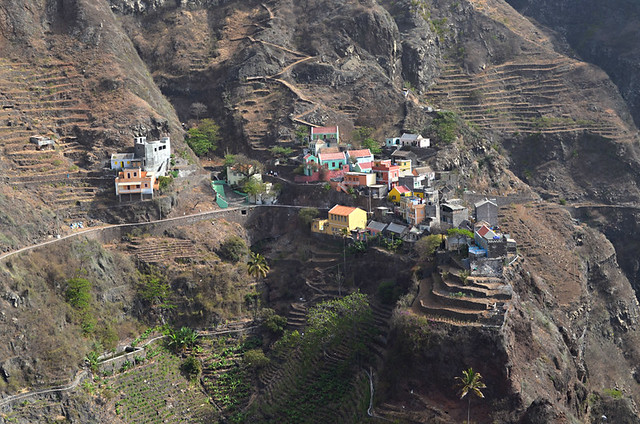 In front of us is a lone football net. Nothing unusual about that except it’s been set up on a low wall behind which is a steep ravine. One inaccurate shot on goal and it’s an awfully long climb to get your ball back. Maybe this sort of incentive is why Cape Verde produces more than its fair share of  skilled footballers. Patrick Viera’s mother was Cape Verdean as was Henrik Larrson’s father and Nani was born there. 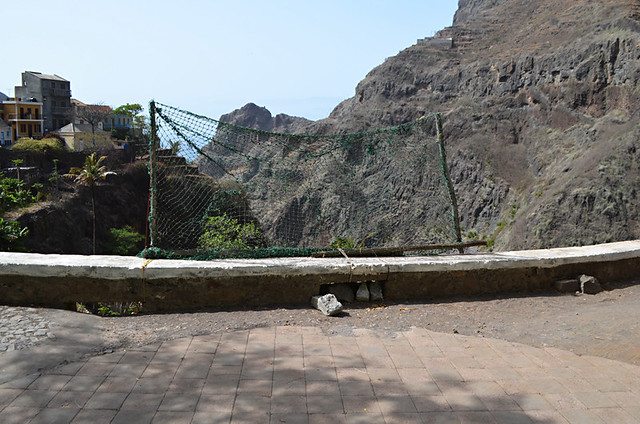 There’s only a shortish section between Fontainhas and Punto do Sol but it does involve a climb out of Fontainhas before we finally descend to the coast.

I watch an old woman climb into an aluguer (a shared taxi, often a pick-up truck). As the car heads up the steep slope out of town I’m slightly jealous I’m not on it. However, the aluguer doesn’t make it to the top of the hill. It rolls back down to flat ground where the driver revs his engine and tries and fails again. The old woman climbs out of the back of the pick-up, places her hands against its tailgate and pushes. It’s crazy. But against all odds the aluguer actually makes it to the top this time… and promptly drives off, leaving the old woman on the hill.

My jealousy evaporates. On second thoughts, I’m glad to be completing the journey on foot.

Task Google Earth with giving you directions on the Mindelo to Porto Novo road and it will tell you it takes just 28 minutes to drive from coast to coast. Google Earth has clearly never driven it… […]