“You might not be able to walk to Mösern,” Daniel, a manager at our hotel, told us solemnly. “Not this week.”

As one of the reasons we were in Austria was to check directions from Weidach to Mösern, this news was a bit of a blow.

We knew the G7 Summit at Schloss Elmau had resulted in a huge police presence in the area, but the summit was over. However, the surreal sight of armies of police vans parked outside nearly every quaint gasthaus for miles around, combined with a mobile military radar unit at the entrance to Weidach, suggested that there was more going on than we’d realised. 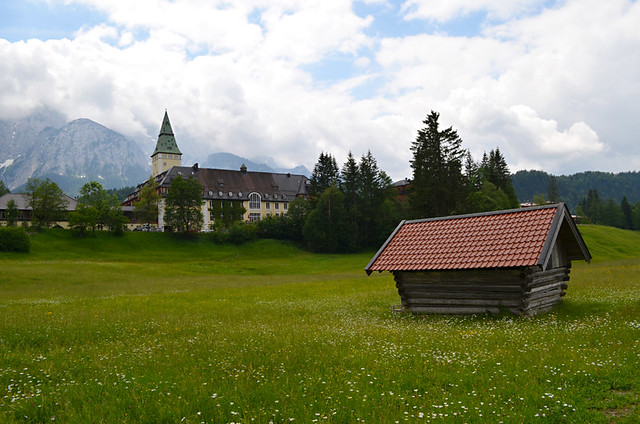 That ‘more’ was a meeting of the Bilderberg Group, basically a get together of some of the most influential and powerful people on the planet in the Austrian town of Telfs, just down the road from where we were staying.

Incidentally, we were due to pass right by Schloss Elmau later in the week. Any intelligence forces checking our plans may have started to suspect objectives that included directly passing the locations where both sets of  ‘influential’ groups had been meeting.

The word was an area around Telfs had been cordoned off, with roads and paths patrolled by police. The area was certainly teeming with men (and the occasional woman) in uniforms. We’d encountered a detour on arrival, when our planned route into the Leutasch Valley was blocked by armed police who directed us into a lay-by. I was so miffed, I got in a question before any of the stony-faced police officers could speak.

“So, can I actually get to Leutasch on this road?” I waved a map at them. It had been a long journey and I wasn’t really in the mood for any nonsense.

The police officer who’d waved us down looked slightly perplexed for a second, before answering ‘yes’ and dismissing us without further ado with a wave of his hand; no doubt thinking ‘I’m not here to give directions to stupid tourists.’ 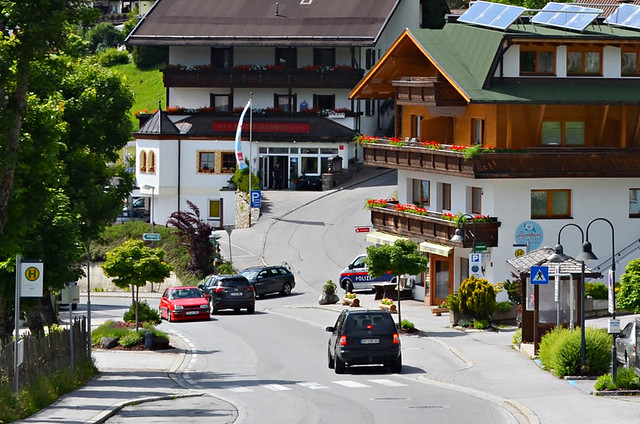 Our first dinner in the hotel confirmed there was going to be a problem with the route. We spoke to two British visitors who had attempted the route in the other direction, coming face to face with a blockade where they had some tea whilst being interviewed by an American news crew. It had all been a bit of an adventure.

There were plenty of trails in the area and if we’d just been wanting to walk to Mösern we’d have been able to bypass the heart of the ‘no-go zone’. But our remit was to check the directions for a specific route. There was no option but to set off and see how far we got, with ‘so, you don’t want to encourage tourism in Austria then?’ primed as a response to anyone who tried to block our way. 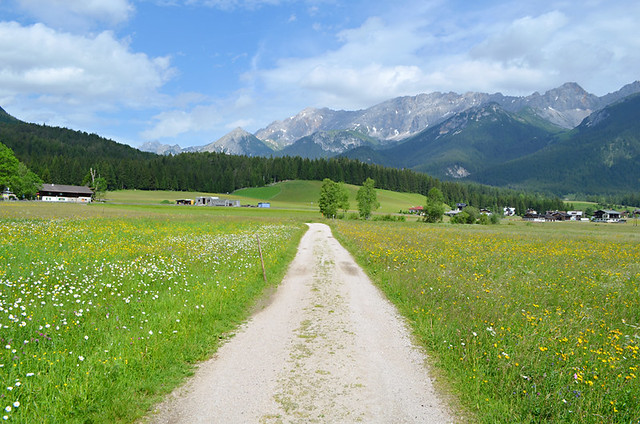 Walking past glassy lakes where the only movement was from fishing lines breaking the surface, and across grassy meadows full of wild flowers and picturesque wooden chalets we temporarily forgot there was a massive security operation taking place off screen.

We forgot, till we emerged from the forest at a car park opposite the Interalpen Hotel and saw the entrance, adjacent to our route, was guarded by police. There were also reams of red tape strung up all over the place.

It was the crunch moment. 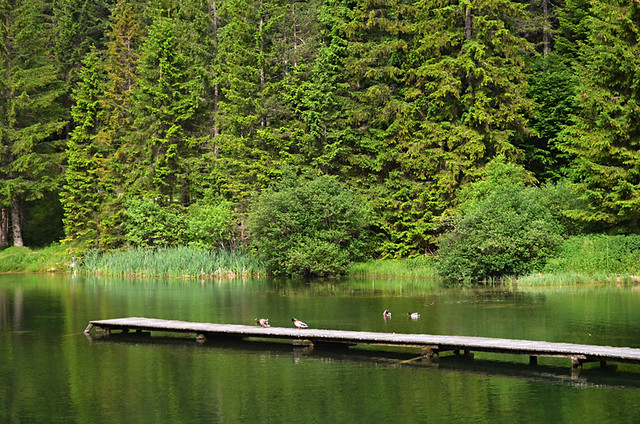 As we walked toward the police line they eyed us disinterestedly. There had been tape across our path, but now it was cut. We sauntered past the police and onto the path. Nobody shouted ‘HALT!’, so the situation looked promising. And then there was a distraction.

A car drew up and three hipsters jumped out. One shouted: “You wouldn’t see this in America.”

I don’t know about the police but it riled me, probably because it sounded lame and hypocritical after too many recent news reports about unacceptable police behaviour in the States. The hipster followed it up with: “We’re a news crew and we’re going to film here. You can turn your backs if you don’t want to be filmed.”

To their credit, the police did just that. I was a bit disappointed. To me, the reporter came across as arrogant and provocative. The police stayed far calmer than I would have.
Then the reporter stood in front of the hotel’s driveway and shoved his microphone randomly towards a car that was leaving. It was a small sports car driven by a young woman who, understandably, ignored him.

“She doesn’t want to speak to us,” the reporter shouted into his microphone. “I wonder why?”

“Because you’re a complete prat,” I was tempted to shout, but with Carl Bernstein distracting the police, it seemed a good opportunity to make tracks. 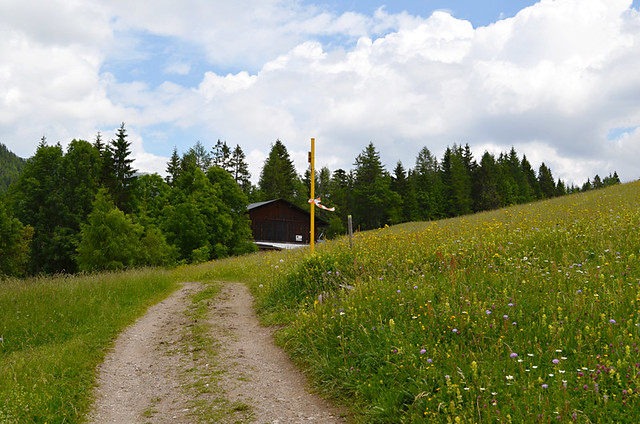 From that point our path skirted a fence of red police tape, which followed us for a greater distance than we expected; the threat that it could block our way at any moment was constantly with us.

Just when we thought we were out of the woods (literally), two men approached from the opposite direction. At first they looked like fellow hikers, but guns at their hips suggested otherwise.

Passports were requested and, as one walkie-talkied our details elsewhere, we were asked who we were, what we were doing, where we were going, what our favourite movie was (not really). Although I knew everything should be fine, it was impossible not to imagine a scenario where things could go horribly wrong thanks to a case of mistaken identity and before I knew it, I would be face down in the back of one of those police vans. I’m sure the thought made me more shifty looking. Interestingly, they knew exactly when we were due to leave the country. 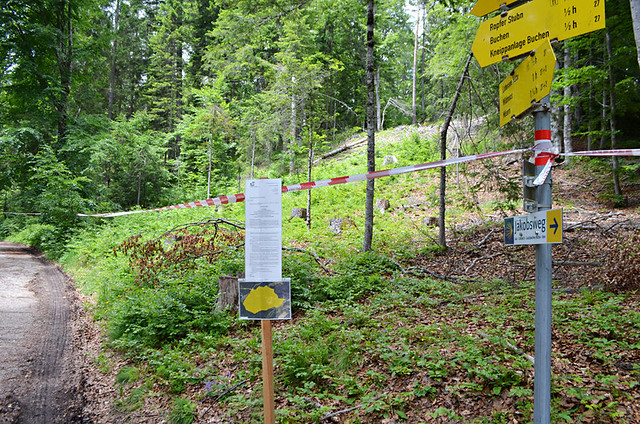 It seemed to take an eternity before it was confirmed we weren’t a threat, during which time one of the police officers spoke quite openly about why they were checking people in the area so thoroughly. They were friendly and polite; although the older of the two was a bit officious – we really didn’t need to be warned about staying on the path and not crossing the tape.

We didn’t mind being stopped, the mini police interrogation wasn’t a problem. They had a job to do, they did it without being heavy. After about 10 minutes we were cleared to continue on our way and complete our mission. It was an excellent walk with or without the Bildeberg Group, and we had a different tale from the trail as a bonus.