Despite having visited a number of Greek islands in our time Andros was a new name to us. Two hours by ferry from Athens it’s a small island, one of the Cyclades, and more a weekend haunt for Athenians than a holiday destination for northern Europeans.

We were there to help pull together a new Slow Travel holiday for UK specialists Inntravel. It’s an island whose charms are as abundant as the wild flowers which decorate its walking routes in spring and yet, thankfully, it remains in the mainstream holiday shadows. Better known near neighbour Mykonos isn’t as pretty, so Andriots told us, but it attracts the rumbustious holiday crowd. As long as there’s sunshine and beaches then there’s a huge chunk of sun-starved travellers who don’t care for the aesthetics of pleasing countryside scenes. Which leaves Andros for those of us who do.

Over the course of a week’s walking from north to south we passed a grand total of seven other walkers. Three of these were Greek, the others were a Dutch couple we passed twice. 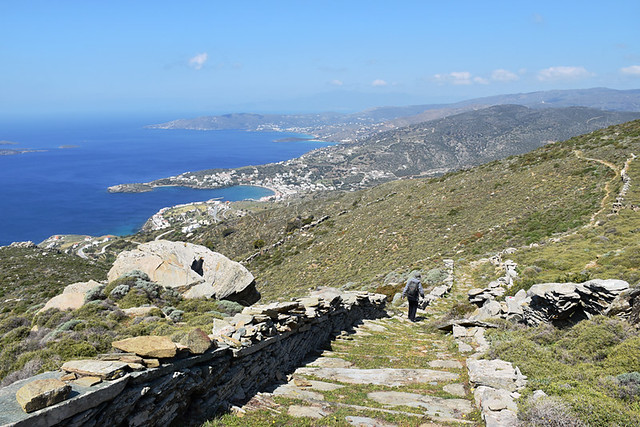 I don’t care if I sound like a trading trail geek, but many of the paths (stenes) on Andros had us in walking raptures. We’ve tread many former merchant trails in various countries, most have had us bitching about their unevenness and toll they take on the soles of feet after numerous kilometres. Not so on Andros where many paths consist of wide, flat stones – veritable walking avenues you could stroll along in your walking finery. Flanked by the most elaborate dry-stone walls we’ve seen they are works of art, and beautifully maintained by a group of dedicated, passionate volunteers, Andros Routes. 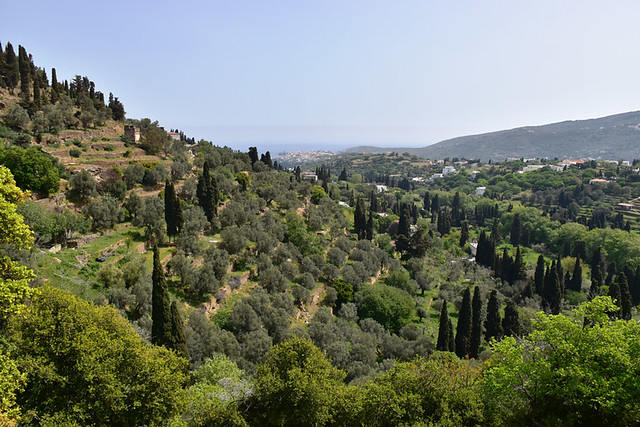 Underground springs keep Andros green even when there hasn’t been a cloud in that intense Greek blue sky for weeks. The gurgling from springs and streams was a common accompaniment on our walks across hill, dale and ravine after ravine. There are oaks, chestnut trees, maples, hawthorns and poplars as well as figs and that proud evergreen which adds a distinctive Mediterranean stamp to vistas, cypress trees. Each route we walked threw up different landscapes. At some point every morning we’d clamber onto a wall for an energy-giving cereal bar hit and spend some quiet moments enjoying whatever green scenes lay before our eyes. 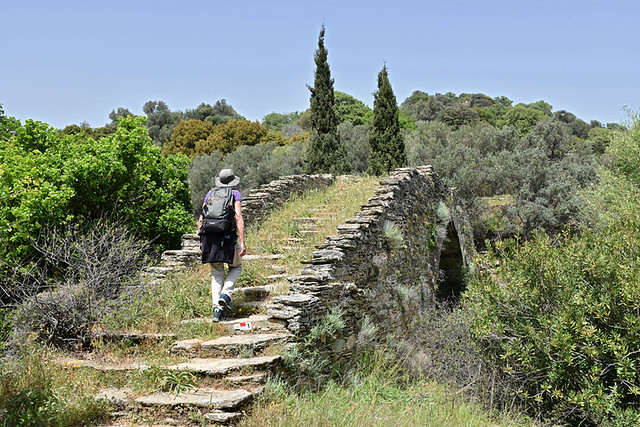 Similar to our experiences of walking on Crete, the island’s past felt close at all times. The paths themselves are an obvious link to former times. But Venetian bridges; ancient ruins; perfectly preserved towers from 3rd century BC; intriguingly fancy dovecotes and hundreds upon hundreds of small churches all add their tales, painting an evocative picture of island life. For example, the multitudinous churches exist because this is an island with a seafaring heritage; everyone needs to have a place close by in which to pray for the safety of loved ones at sea. 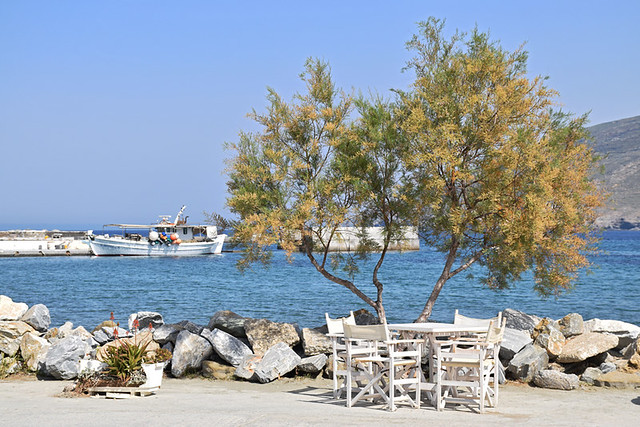 A Greek island wouldn’t be a Greek island if there weren’t harbours backed by tavernas. What made me smile on Andros is that places described by some as bustling and busy seemed more on the tranquil and sleepy side to us. But we were there in April rather than summer. Gavrio, where the ferry arrives, isn’t the prettiest Greek harbour around, but as ferry ports go it isn’t bad. Basti is closer to stereotype whilst the place in the picture above was described in some literature we read as “everywhere apartment complexes are being built…” Not the impression we got as we sat at a taverna opposite the sea on a road so quiet a swan took up residence in a hollow in the centre of the dusty street. 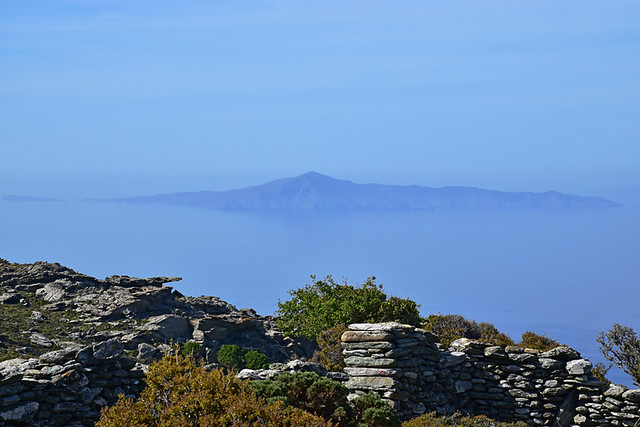 There’s something special about archipelagos where neighbouring islands are visible; in former times being able to see other lands must have woken many travel bugs and launched countless mini odysseys. As we walked from north to south, on the horizon drawing our gaze was a mysterious island with a lone peak. Gyaros has no water or trees and was a concentration camp for political prisoners up until as recently as 1974. What’s unsettling is it remains completely out of bounds, even fishermen are not allowed into the waters around the island. 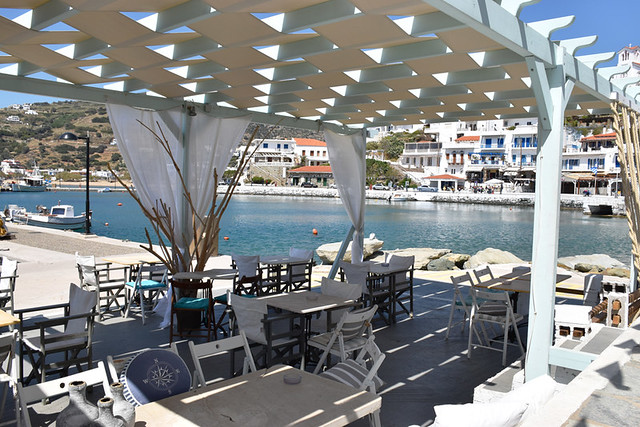 I come from a small island. There are certain traits small places completely enclosed by water share, no matter where they are. There’s an insularity which can be both positive and negative. Andros felt as though it broke the mould. For a tiny island it seemed surprisingly sophisticated, especially in Chora, the main town, where many restaurants and coffee shops had a more cosmopolitan style than I’d expect. The Athenian influence may be a factor. But being an island of mariners as well as having links to the shipping industry, and therefore a travelling mentality, must also have helped shaped its character. Whatever the reason, it made it quite different from other islands I’ve visited. 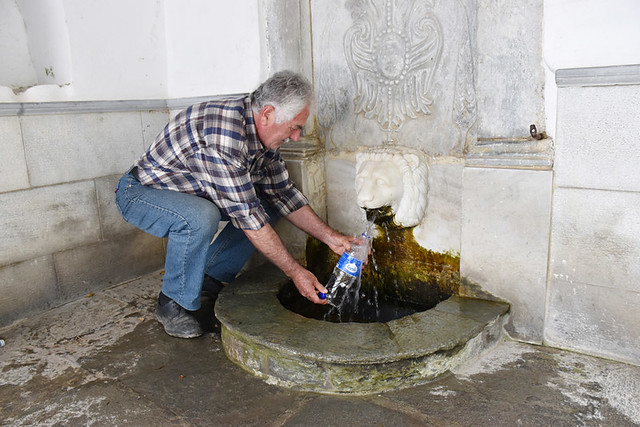 This might be linked to above. As well as being bend-over-backwards friendly, many of the local people we met were smart, interesting, direct (as a Scot it’s something I always respond well to) and with big personalities. People seemed passionate about their island and also about sustainable tourism. Even the clergy surprised me. On one occasion we watched two playful Greek Orthodox priests ‘steal’ food from each other’s table to give to their own flock. In a monastery high in the hills, a young priest invited us in for coffee and sweets; possibly the first time I’ve ever been in a place of worship that actually felt more like a welcoming sanctuary. 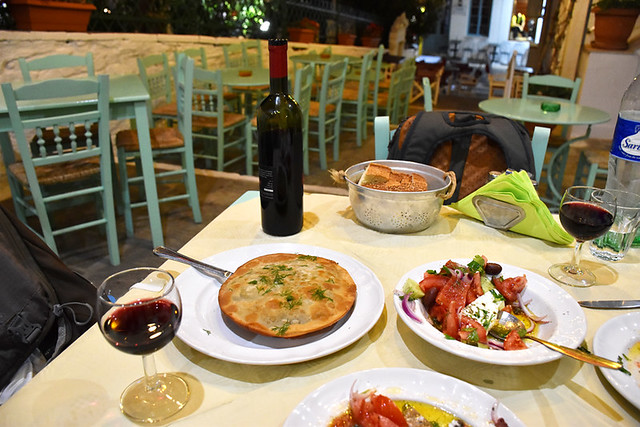 Arriving the night before Easter Sunday, we were invited to the family Easter Sunday dinner at our accommodation. Having to almost run around our first walking route in order to make it back in time for a 2pm lunch date, we found ourselves surrounded by generations of family and friends, none of whom apart from our hostess could speak English. Thankfully, embarrassing attempts at trying to communicate were interrupted by a feast which included a full lamb, buckets of tzatziki, country sausages, fried liver, Greek salad, trays of spinach and feta pies, and potent home-made wine. It was a good introduction to Andros’ culinary scene. 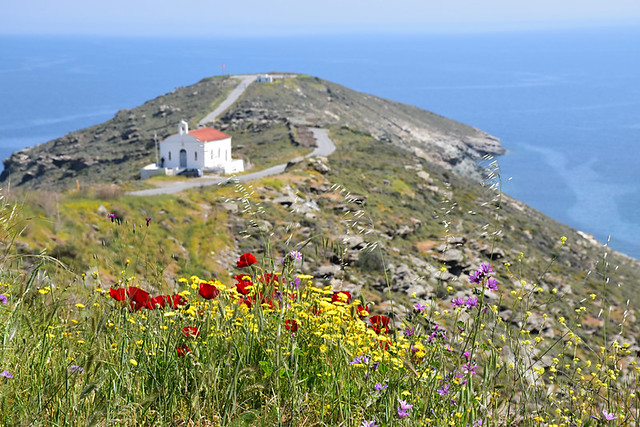 Being spring, the island was looking at its colourful best; many paths were lined by a scarlet poppy army. Perfumed orange blossom and the sweet aroma of ripe figs are fragrances I associate with Greek islands anyway, but on an island with a thousand types of plants, 400 species of mushrooms and over 170 varieties of herbs; the Andros air is scented with so much more than orange blossom and figs. 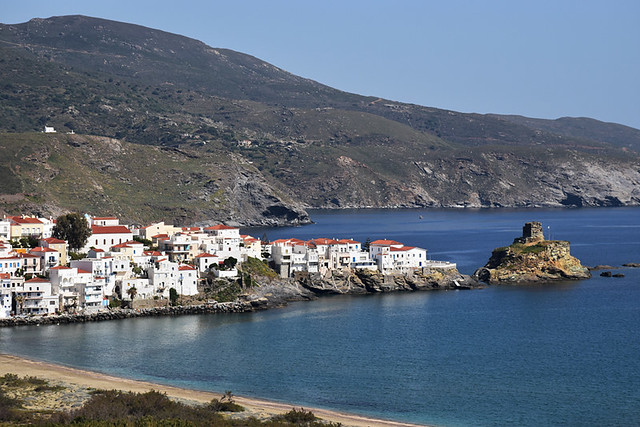 The biggest town on the island Chora, aka Andros Town, boasts not one but two sandy beaches, and the main town doesn’t back either. Instead, it runs from the ruins of an old fort across a dodgy looking bride and along a ridge inland. It’s curious and unlike any other Greek coastal town we’d seen before. But as picturesque Greek coastal villages are ten a penny, it makes it stand out from the pretty crowd and in many ways gave it extra depth and made it more of an interesting place to explore.

As he drove us to the ferry at the end of our visit, Dino, the owner of apartments we stayed at on the outskirts of Chora, sort of summed up Andros after asking which other Greek Islands we’d visited.

“So until now you’ve only been to the touristy islands.”