The clanging of bells as goats made their way to their daytime pasture was our alarm call in the morning; a mixed chorus of song from golden orioles, bee-eaters and azure-winged magpies serenaded us over breakfast under a grape covered arbour; the views from the terrace where we set up our temporary al fresco office were of fields of golden grasses, cork forests, and possibly the prettiest hilltop town I’ve ever set eyes upon; our spring water came not from the supermarket but from the mouths of stone lions at a fountain in a nearby village. And the old house we were renting in Alentejo had more quirky features than a Harry Potter novel – rocks in the hillside acted as steps into the kitchen. 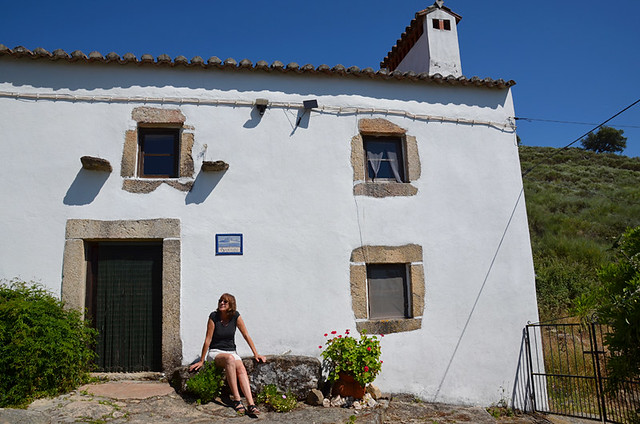 It was what could be truly described as a rural idyll; miles and miles of glorious wilderness beyond the back of beyond in Galegos. In many ways a writer’s dream, living in what was former smuggling country on the border between Spain and Portugal where local characters were travel-novel colourful, and a cast of over-sized insects regularly added unpredictable elements… as well as a few screams. At the end of the working day we’d strip off, jump in the deliciously cool pool and dry out in the early evening sunshine, Bohemia beers in hand. It was bliss. 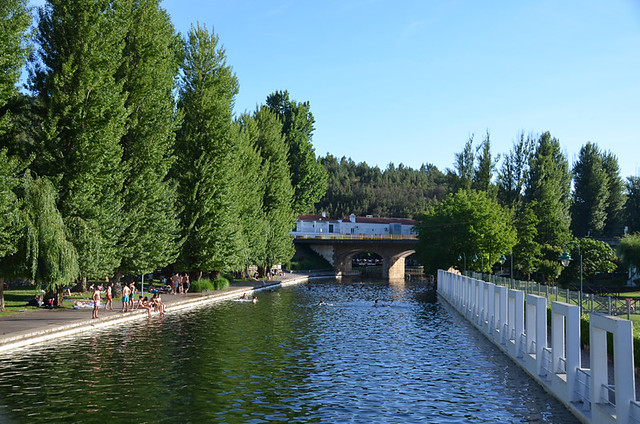 And yet I struggled to write anything creative in nearly four months.

Remote living can be a full time job in itself. The most basic aspects of daily life can eat up the time. When we wanted petrol we had to drive to Spain. Admittedly ‘Spain’ was only 10 minutes away (or 100m if we walked up the hill behind the house), and life at the frontier petrol station could fill the chapter of a travel tome in itself. There was no just popping into a random hairdresser for a quick haircut. The first haircut I had in Portugal, after two months of becoming increasingly foppy-headed, was in Cáceres in Extremadura, Spain. 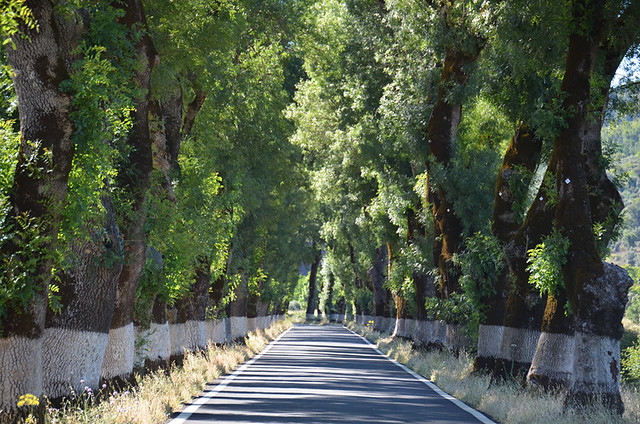 There was a small supermarket in nearby Portagem, a sleepy village by the River Sever which exploded into life at weekends in the summer when Spanish from across the border arrived to enjoy the cooling embrace of a fluvial beach. It was great for bone chouriço and cannon ball morcilla, but for ‘proper’ shopping we headed to the Pingo Doce supermarket in Castelo de Vide thirteen kilometres away, a dream of a drive through an avenue of ash trees wearing white belts. It was a good little supermarket (it had hummus and feta) but its countryside customers were on the dour side, there were none of the smiles we were used to in the Canaries as we asked “desculpe?” when faced with a blockade of bonnet-wearing men in its narrow aisles. (Note: bonnets are what we Scottish call flat caps.) 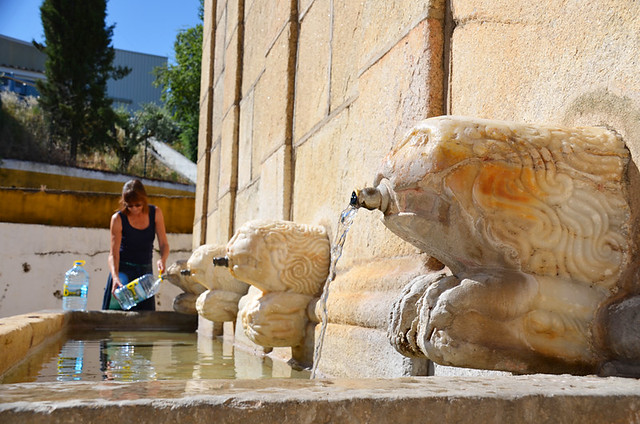 However, these added fleshy meat to the bones of living in the Alentejo wilds. The real problem was when things went wrong. When the pool struck a leak, putting it out of action, it took ages for it to be repaired due to the limited availability of the local pool-fixer, during which time what had been the perfect outdoor space became a mini building site. Similarly, when a concealed pipe must have cracked resulting in the flooding of the downstairs bathroom every time one of us spent more then a couple of minutes showering in the upstairs bathroom, part of the garden had to be dug up. This not only put our breakfast terrace out of bounds, but also meant we had to ‘bathe’ in the pool for a couple of days. When problems occur, you realise countryside living means it takes longer to resolve them. 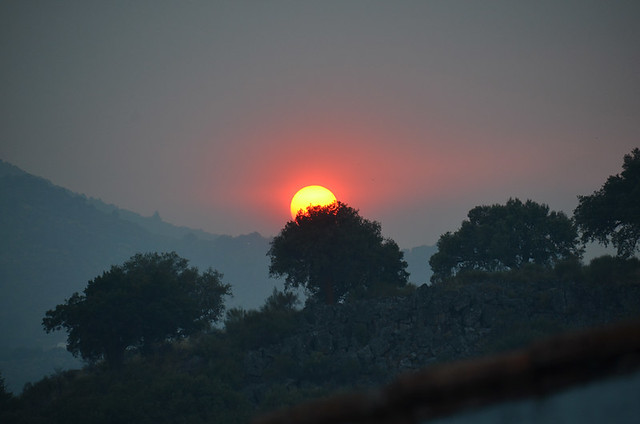 The fires which raged across many areas of Portugal over the summer of 2017 also made us realise just how vulnerable it can feel living in a remote area. A couple of times small fires broke out nearby, these were thankfully quickly dealt with. In July, the smoke from forest fires over 70 kilometres further north turned the skies prematurely dark, filling the air with the unsettling smell of a burnt land. We kept a close eye on a Portuguese fire app which at times made it look as though the whole of Portugal was on fire. It might sound paranoid, but for a period the worry regarding the possibility of a fire breaking out in the golden fields around us as we slept was a distraction. 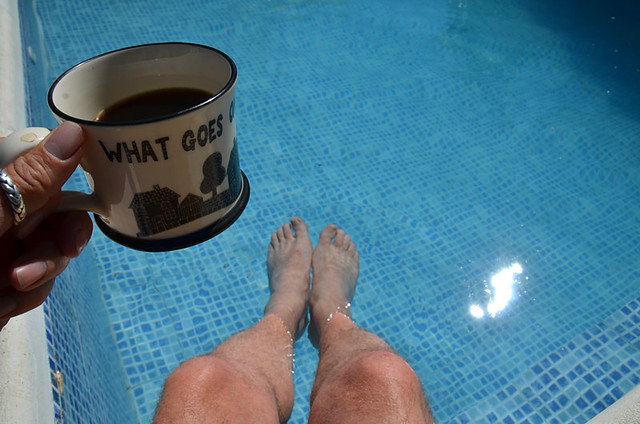 Although we were still adjusting to the bigger scale of life on the European mainland after years of island living (it was an hour and a half drive followed by a two hour train journey to get to Lisbon airport), it became more and more apparent that for all the charm and natural beauty of our surroundings we craved to be closer to a larger town. We’d partly made the moved to reconnect more with mainland Europe and yet felt more detached than ever.

For some that would be a huge plus. For me, from a writing point of view, I missed the triggers that come from regular interaction with the bustle of bigger traditional towns. 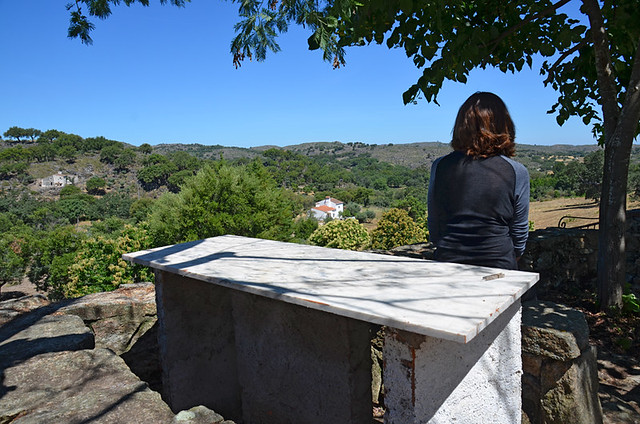 Our months in Alentejo were extremely happy ones and will be remembered with great fondness. But sometimes you know when the fit isn’t as perfect as it could be.

Basically, if this were a love affair I’d be taking Galegos gently by the hand and saying with utmost sincerity – “honestly it’s not you, it’s me…”

Like a living barometer, you don’t need a calendar here on the farm to tell you when the seasons are changing, the animals do that for you … […]