It’s the sort of station which would feature in your dreams; a crossroads where you alight from a train from the world of the living onto an eerily empty platform to await a train to… well, whatever comes next.

What’s unnerving is that there is NO Segovia at the train station. Instead of concrete, it’s surrounded by flat, golden, empty plains. There’s no city to be seen anywhwere. There are no other buildings to be seen anywhere.

The first thought that entered my head was ‘where the hell is Segovia?’ The second was ‘if I can’t even see the place, the taxi is going to cost a fortune.’

Less than €10 as it turned out. Segovia does an extremely clever job of hiding itself in a shallow hollow in the landscape. It was only a 15 minute ride from the station to being dropped off on a cobbled street a few yards from the Hotel Don Felipe near the centre of the old town sitting proudly atop a rocky bluff. 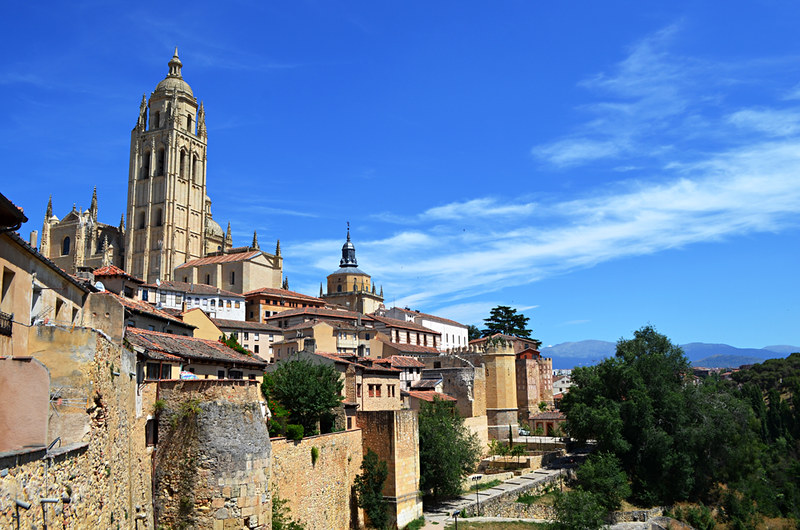 Unsurprisingly Segovia is a UNESCO World Heritage Site. The entrance to the old town is located to one side of an astounding and beautiful feat of engineering, a Roman aquaduct dating from 50BC whilst the other end of the old quarter is bookended by the Alcázar, a Disney-esque fortress from around the 11th century. Between the two is a maze of streets, narrow alleys, plazas and gardens which probably haven’t changed a great deal over the centuries. For many, many years this was a harmonious multiculural society where Moors, Christians and Jews lived and worked together.

1.30pm – Lunch at El Secreto de San Clemente (Avda Fernandez Ladreda, 14)
Great views of the Roman Aquaduct accompanied raciones of calamari (a bit on the mushy side but tasty enough) and huevos roto (a reliably savoury mountain of fried eggs, chorizo, iberico and sliced potatoes). The food was on the hearty side for a summer afternoon but a couple of glasses of crisp, white wine helped smooth its passage. 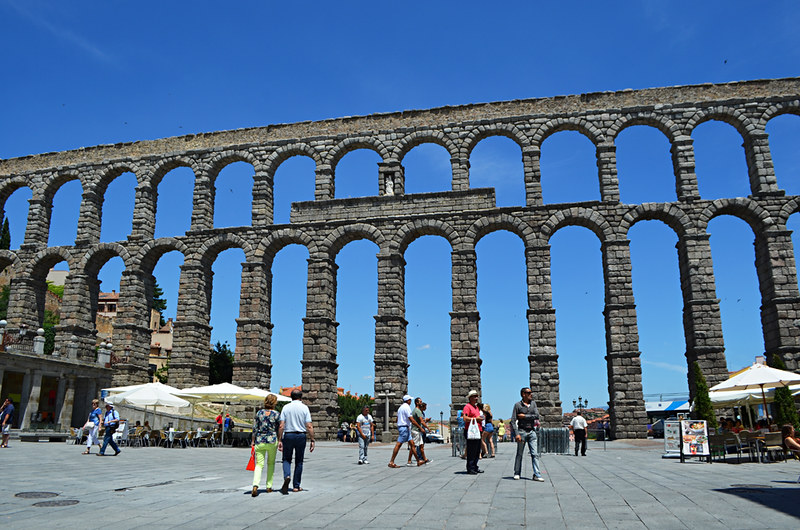 3.30pm – Segovia’s Roman Aquaduct
Tackling the steps beside the Aquaduct climbing to the old town isn’t the easiest way to get to Segovia’s top attractions Plaza Mayor and the Cathedral, so it’s not a route taken by most visitors. Which meant we were alone to enjoy mesmeric views across the Aquaduct to golden fields and ancient towers with nesting storks atop them.

5.30pm – The Alcazar
The old fortress was getting a nip and tuck which meant there was scaffolding around most of it. It wasn’t looking its best for a photographic session. However, the surrounding views of the soft plains broken up by a handful of hamlets (usually surrounding a church or monastery) made up for the disappointment, as did getting close to more nesting storks in the trees in front of the Alcazar. 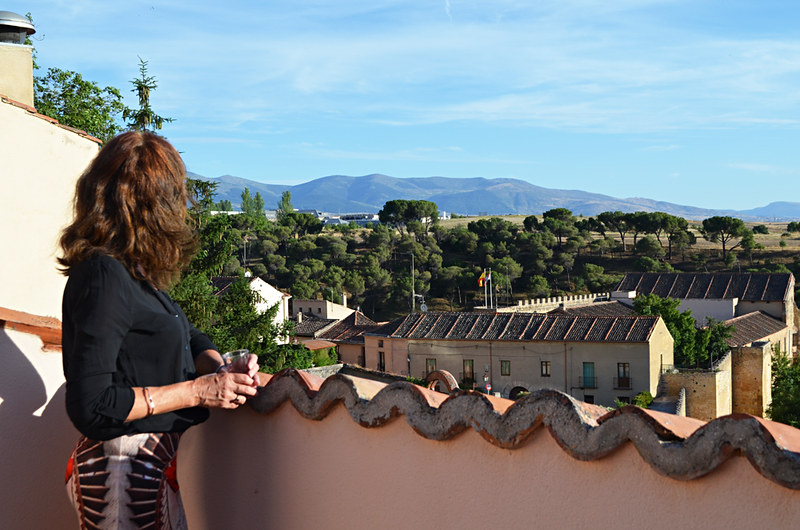 7.30pm – An Aperitif
The vista from our balcony in the Hotel Don Felipe lacked one thing, a glass of wine to finish it off nicely. I’ve always been drawn to landscapes which feature rugged drama, but there was something about the soft, dreamy plains around Segovia which bewitched me. As Andy put it, “this is ‘As I Walked Out’ country.”

9.30pm – Dinner in Plaza Mayor
Most menus in Segovia specialise in a fabada like bean stew called judiones de la granja and suckling pig. Suckling pig is common where we live; so we fancied something different, lighter. A starter of saquito de brick relleno de cremoso de queso, puerro confitado y gamba blanca (cream cheese, leeks and prawns in pastry) on the menu at Restaurant Julián Duque drew us their way. The bricks were teamed up with mushroom croquettes and a slate of local cheeses… plus a bottle of Ribero del Duero. Our table in the corner of Plaza Mayor was in prime people-watching spot. Although not overwelmed by tour groups during the day by any means, the plaza has a very different personality after the daytrippers have left. 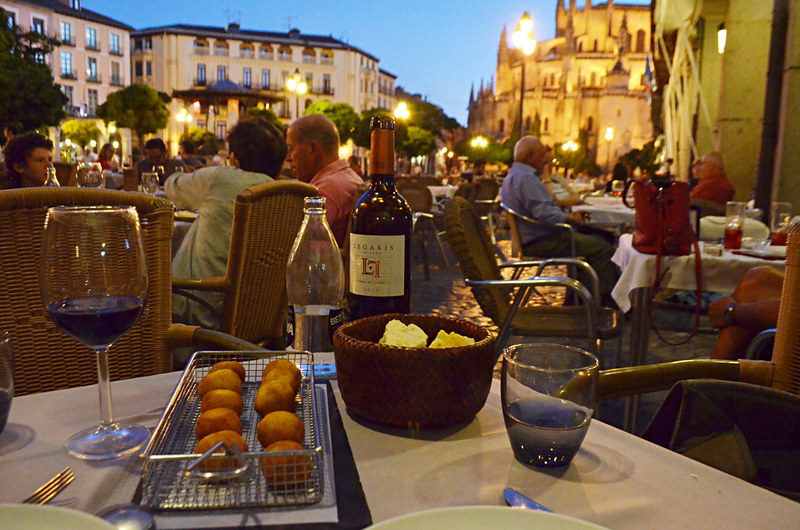 11.30pm – A Nightcap
The draw of our balcony at the Don Felipe was strong and as we only had one night to enjoy it, we sat for a while in the darkness sipping wine and looking at the stars.

8.30am – Breakfast
A quite intrusive TV in the breakfast room had a news report about the running of the bulls in San Fermín. It showed one runner being badly gored by a bull. Another couple in the dining room (not Spanish) laughed loudly at the scenes. Bizarre and seriously inappropriate. In the words of the great Jim Morrison, people are strange. 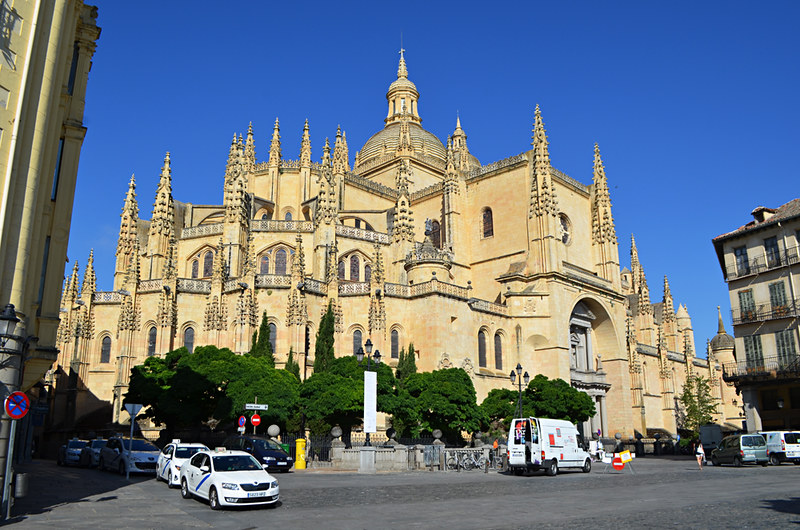 10.30am – Cathedral and Calle Cervantes
The Cathedral is a scene stealer. It’s difficult not to stop and gawp at its beautifully structured frame every time you pass, it is a 16th century Gothic masterpiece which glows with greater intensity as the sun slips low in the sky at the end of the day. It also boasts an entrance with a super name, the door of forgiveness.
The street leading from the Aquaduct to the Cathedral buzzes from early morning with visitors and locals. The nature of the shops which line it (fashion shops, supermarket etc.) reveal the street exists for residents first and tourists second. Unlike some other UNESCO World Heritage Site historic towns, Segovia hasn’t had its personality corrupted.

12.30pm – A Quiet Corner
Time for one last meander through the maze. Like many popular tourist destinations, most people follow the same pattern. Subsequently the streets linking the aquaduct with Plaza Mayor and the Cathedral were busy. But the rest of the old town was crowd free. We spent our last couple of hours cutting down alleys passing palaces, churches and fountains till we arrived at shady gardens beside buildings which were equally as beguiling as those on the main tourist drag, but which were completely people free, save for a couple of local lovebirds and a young girl engrossed in a book.

Parts of Segovia feel like a present which hasn’t been fully unwrapped. 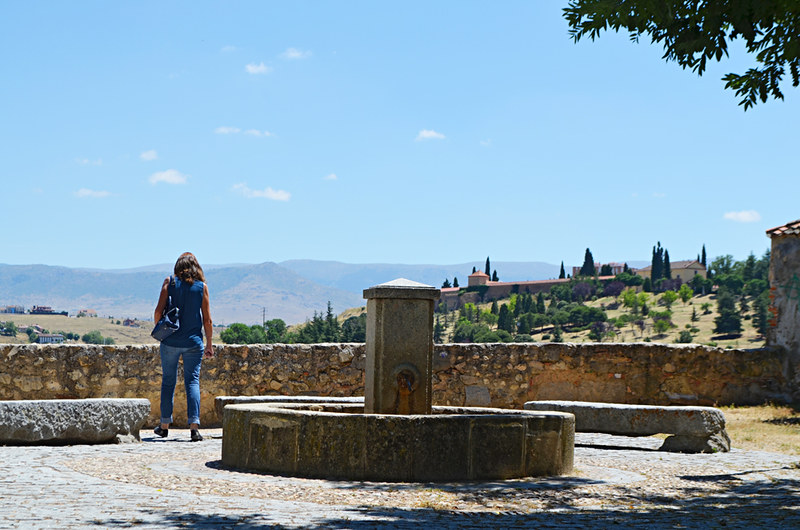 Factfile: we travelled from Madrid’s Chamartín station to Segovia on the regular high speed Renfe train as it was the quickest way but there are alternative ways to get there (train and bus). The return ticket cost €24; however, choose the right time and it can be as low as €10.30.