My first thoughts at arriving at what was little more than a hamlet was ‘it’s going to be a long three nights here.’ Olmi Cappella is in the middle of nowhere. Clearly it’s in the middle of somewhere on Corsica… but it felt like somewhere called nowhere. 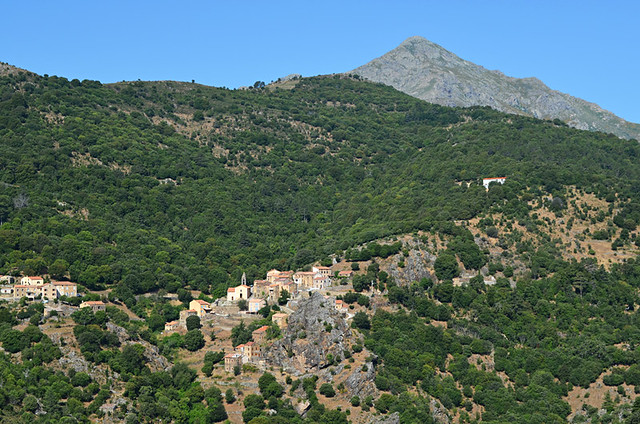 The surrounding Corsican countryside was of the super model category when it comes to landscapes – a multi-layered world of rolling hills, sandstone coloured villages teetering on slopes and, lest you be fooled into thinking there was anything soft about the Corsican hinterland, lofty arrogant peaks that boomed ‘come and have a go if you think you’re hard enough.’

Outstanding though the scenery was, it didn’t feel like enough of an ingredient to keep experience junkies like us sated for three days.

There was a bar restaurant, L’Osteria, (there were two bars but one, apparently, only ever opened when we weren’t there) and a supermarket. A couple of bottles of Corsican wine were purchased tout de suit as we figured we might be in need of their company after dark. 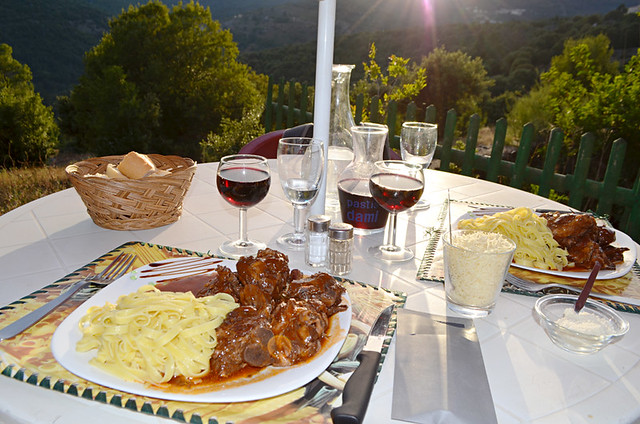 However, by the time a sunset dinner was eaten on L’Osteria’s woodland terrace, Olmi’s residents had already started to provide depth to the place, adding bursts of colour which might have you suspecting ‘characters provided by Peter Mayle’. There was the little woman in her pyjamas (no matter what time of day) who stopped us every time we passed her house/business to engage in exuberant conversation – she talked and laughed, we just laughed (not having a clue what she was on about). I have absolutely no idea either what went on at her house. At various times we saw fresh bread, sacks of cement, and reams of material being loaded into little vans. Then there were the men playing boules in the shade of the church tower whilst an untethered monster of a bull looked on. You might think I’m pushing it by adding a trio of tortoise-loving Hell’s Angels (two of them weren’t really Hell’s Angels but their logo suggested they were). But I can take the implausible characters up a notch further by throwing in a man from Reunion Island who caught a flight to France and then bought a ticket to what he thought was Bordeaux and somehow ended up in Olmi Capella by mistake… and never left. 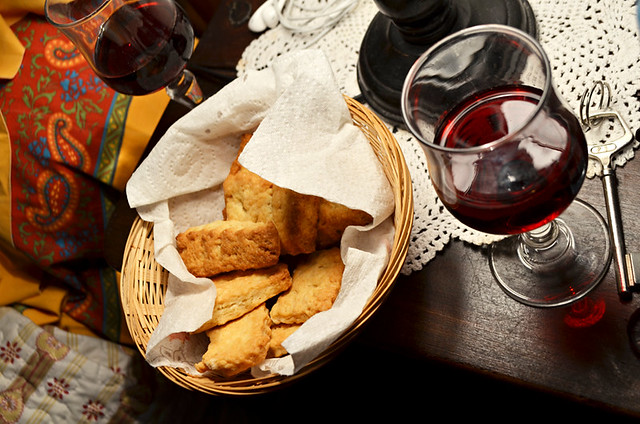 Our shockingly bad French meant there was literally a stuttering start to our relationship with the L’Osteria bad boys, but they seemed to take to us. By the time we left the first night, we staggered home. Not because of drinking too much wine but because we could hardly carry stomachs which had been overfilled by a mountain of lamb.

Whilst I flopped onto the bohemian sofa in our room like an uncomfortable beached whale, Andy went in search of wine glasses, returning with glasses plus a huge bowl of biscuits made by Antonia, the owner of the chambre d’hôte. Despite already hurting, we didn’t want to offend so saw off as many biscuits as we could manage whilst sipping wine and craning for any breeze that took pity on us by wafting in the open window. Carried on the occasional cooling breeze were laughter and lively conversation from the nearby bar which we never actually saw open. If you think I’m exaggerating, this was a Friday night. We decided to have a drink there the following night, Saturday. It was closed. 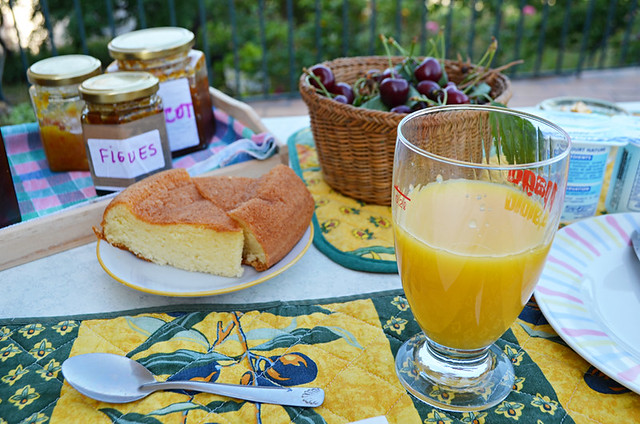 We’d hardly slept off the feast when we were presented with a breakfast consisting of a basket of breads, homemade cake and jams, fruit (including a bowl of freshly picked cherries from the garden), freshly squeezed orange juice, coffee and yoghurt.

Our planned explore of Olmi Cappella’s hills and valleys should have helped counteract the generous amounts of food we’d consumed in less than 24 hours of being in the place. But the locals were having none of it. At dinner we’d arranged to pick up a picnic from the lads at L’Osteria. What they had ready for us was more like a couple of Chinese takeaways – two carrier bags filled with neat little trays of tuna salad, boiled eggs, biscuits, yoghurt, fresh juice, fruit, family-size pack of crisps, water and a torpedo of a baguette bulging with meat and cheese. There might even have been a fortune cookie in there. 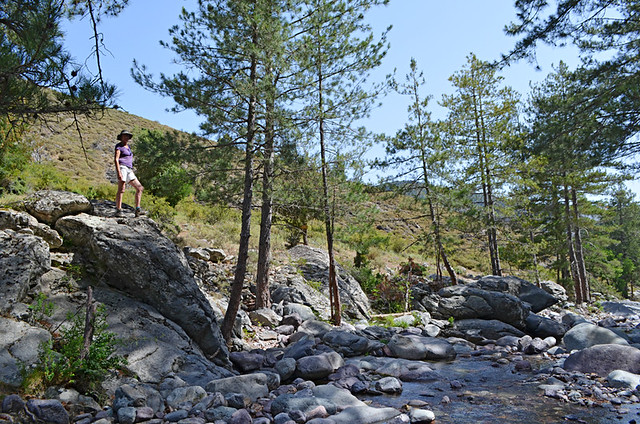 We’d planned on setting off on a mule track to find some Genoese bridges but we hadn’t expected to be actually loaded up like mules. There was far too much food, so half was left back at our room – still leaving what was a very generous picnic.
Post lunch, with bellies re-stuffed and wallowing in the delicious shade of an ancient bridge beside a crystal pure river, we vowed to choose the lightest dish on the menu that night.

That was never going to happen. As we passed L’Osteria at the end of our walk chef Ivan spotted us and called out “I have a nice piece of pork for you tonight… and I’m making a special sauce.” 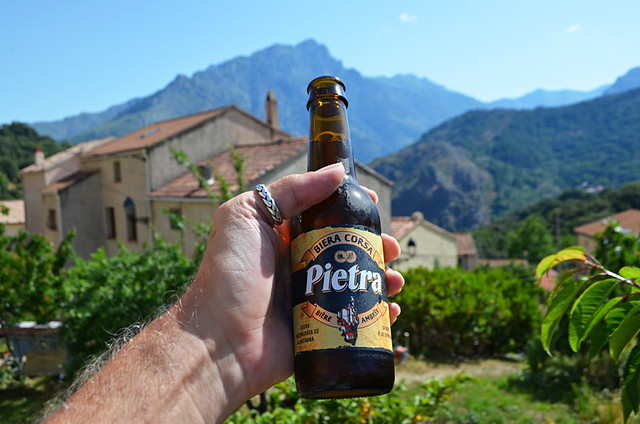 A few minutes later, arriving back at our chambre d’hôte, we were met by a smiling Antonia holding a brace of ice cool chestnut beers.

And so it went on, a carousel of being plied with food and drink which, in truth, left a lovely warm fuzzy feeling that we were being very well looked after by the Olmi Cappella family.

I had initially thought three days in Olmi Cappella might be too long. By the time those three days were up I didn’t want to leave.

In the Camargue, ask anyone for suggestions about what to do in this intriguing area of France and the chances are they’ll reply ‘visit the Parc Ornithologique Pont de Gau’. […]