The water dances and sparkles, it’s as electric blue as the upholstery on the  wooden motor launch serving as our transport to the island.
There’s something delectably 1960s about the scene; a row of recently varnished boats lounge lazily on cobbles sloping into the lake; the fourth side of a piazza lined by elegant town houses with peeling pastel plaster façades. This is Italy, even faded and cracked plaster looks deliberately tasteful.
I take Andy’s hand, helping her onto the launch. My imagination replaces our forms with a sharp-suited Sean Connery assisting Vesper Lynd (which of course never happened) on a mission to confront the domineering, egotistical villain of the piece who’s holed up on an historic isle in the middle of Lake Orta.
We recline at the back of the launch, the only passengers, as the bronzed captain with designer stubble manoeuvres the boat and aims it at the sombre ecclesiastical buildings dominating Isola San Giulio. It is impossible to keep Monty Norman’s theme tune from playing in my mind… even though I know we’re really just another two ordinary tourists exploring an extraordinary part of the Piedmont countryside. 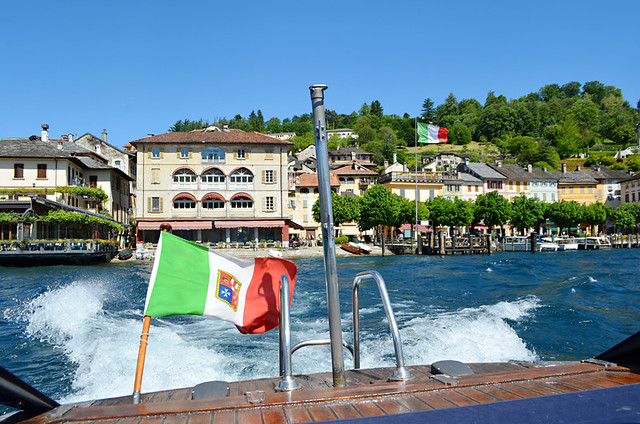 Location, location
Lake Orta isn’t one of the best known of the Italian Lakes, but it is one of the most enchanting (admittedly they’re all enchanting, but Orta is enchanting+). Located in the Province of Novara in Piedmont, Lake Orta lies to the west of the more famous Lake Maggiore.
If Lake Orta is a sparkling crown, Isola San Giulio is the jewel at its centre, with the town of Orta San Giulio sparkling almost as seductively on a promontory opposite the island.
Although it’s still referred to as the secret lake, the secret seems to be well and truly out as there were plenty of visitors of various nationalities basking in the beauty of the small town’s centre.
Like so many places that attract tour groups, they don’t stray too far from the beaten path, leaving plenty of narrow streets and lakeside paths meandering past stylishly historic town houses, Baroque and Romanesque architecture free from crowds to explore. 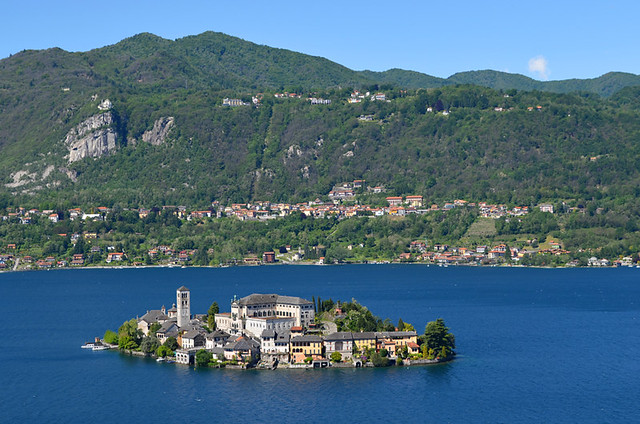 A sense of history
Reading the history of Orta San Giulio one word comes to mind, squabbles. There seems to have been a millennium of squabbling and fighting between various noblemen and bishops until a period of relative stability fell over paradise from the 1600s. One of the most interesting ‘stories’ relates to Isola San Giulio and how it ended up with a religious personality. Back in the mists of time, a huge, malevolent serpent dominated the island. It was a dangerous and destructive neighbour to the people who lived on the shores of Lake Orta… until San Giulio turned up, sailed out to the island and, in rather ambiguous fashion, rid the island of the serpent. Of course, after that he claimed it for God, building a church to the Holy Apostles. It’s been a centre for religion ever since and is now home to a silent order of nuns overseen by a strong-willed Abbess who is said to dictate what does and doesn’t happen on Isola San Giulio. 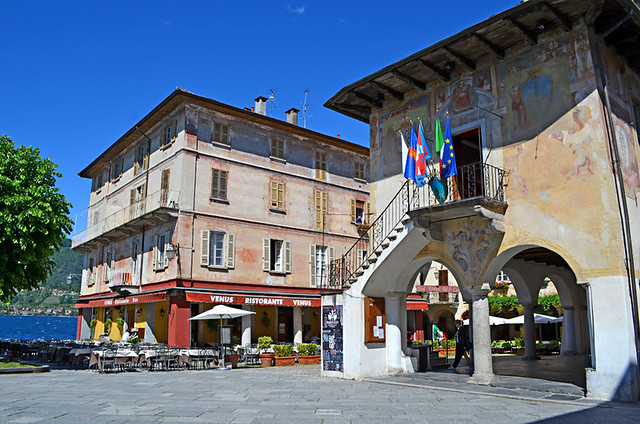 Street Strolling
The most aesthetically pleasing way to arrive in the town is to park near Villa Crespi at the entrance to the promontory and walk up to Sacro Monte di San Francesco, a UNESCO World Heritage Site and nature park with 21 chapels amidst Scots firs, yew and ash trees. I had only a limited interest in the old chapels with their frescos and sculptures, especially as the views over the lake are spell-bindingly distracting. From the Sacro Monte, a cobbled path descends to the rear of the town via the cemetery, passing fungus shops, colourful cafés and alluring courtyards before arriving at Piazza Mario Motta –  every inch the epitome of a lakeside piazza in an historic Italian.
Before catching a launch to the island, we continued on the lakeside path heading out the opposite end of the town. After a short distance, the buildings and the crowds thinned out, replaced by trees on one side and a thicket of bamboo on the other. It’s a tranquil spot that offers another good photo opportunity. 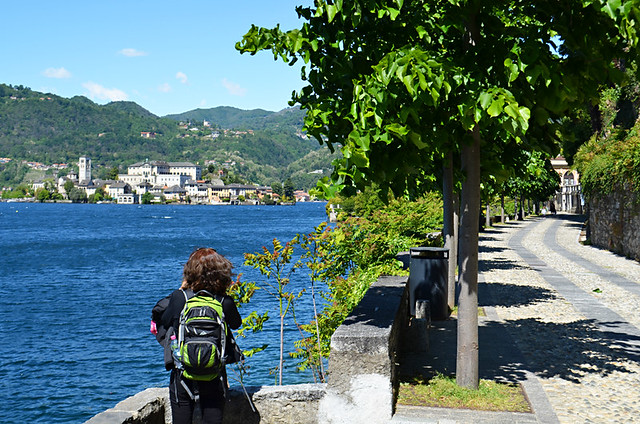 Island Hopping
The hop to Isola San Giulio is short (400m) and relatively cheap (€4.50 each way). Even without the enigmatic island destination, the journey is worth it for the views and the chance to feel like a super suave traveller for a brief time. Because the Benedictine monastery takes up so much space on an island less than 300 metres long, a wander around it doesn’t take very long. Some find it charming and quaint, others find the quiet narrow streets on the oppressive side, possibly thanks to the silent presence of the monastery. All along the streets are metal signs with what are presumably supposed to be pearls of wisdom but made me think of a line from Alabama 3’s Ain’t Goin to Goa. Whatever your view, it is a fascinating island with a depth of personality that extends beyond its picturesque streets. 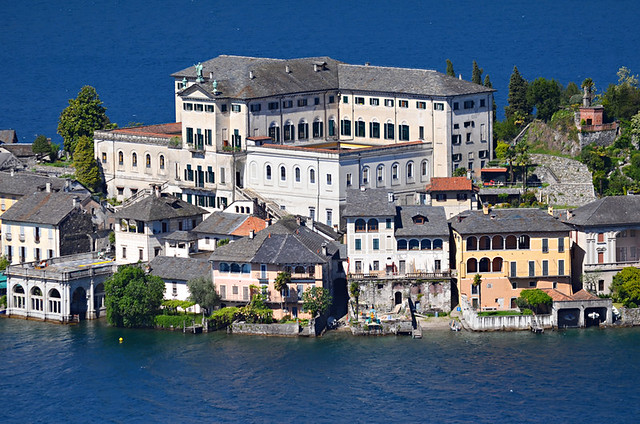 Time out for Refreshments
Piazza Motto is the place to let time drift away at a pavement café with how-beautiful-is-this views across to the island. But for an Italian 1001 Nights experience (or in this case 1 lunchtime), Villa Crespi has two Michelin stars, magical food and an Arabian styled minaret. 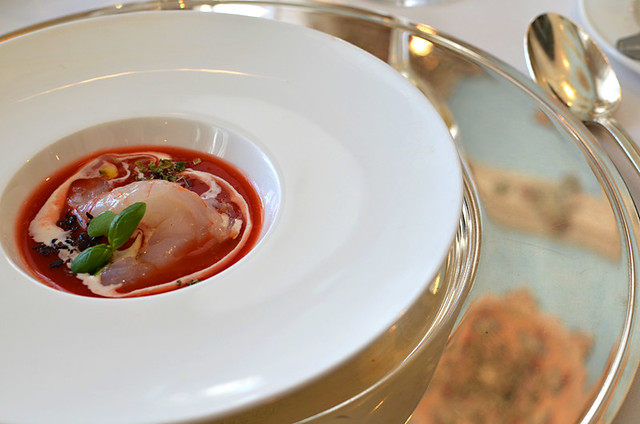 The Highpoint
It’s got to be the view of Lake Orta from Sacro Monte.

The Quirk
The Abbess on San Giulio is a renowned author and poet. As it’s a silent order, presumably someone else recites her work.