From June onward we work outside during the afternoon. The small bedroom we’ve turned into an office becomes too stuffy as the day heats up, even with one large window permanently open (screen in place to keep out flies and curious cats, of which there are many – cats that is).

But although working in an al fresco office helps immensely during the dog days of a Portuguese summer, by late afternoon we can become stir crazy. When this happens we kidnap our neighbours’ dog from the pen where she spends long days (they work in Lisbon and leave early, return late) and head into the cork forest outside the front gate. It’s a short yet immensely enjoyable circuit which changes with the seasons. At this time of year the grasses are brittle and thirsty looking, but the corks are striking, barks freshly stripped to revealing a vibrant, copper nudity. Adding a soundtrack are a pair of storks nesting on an electricity pylon, click-clacking as we pass, and Eurasian Jays which screech their way through the trees, sounding as though they have throat infections. 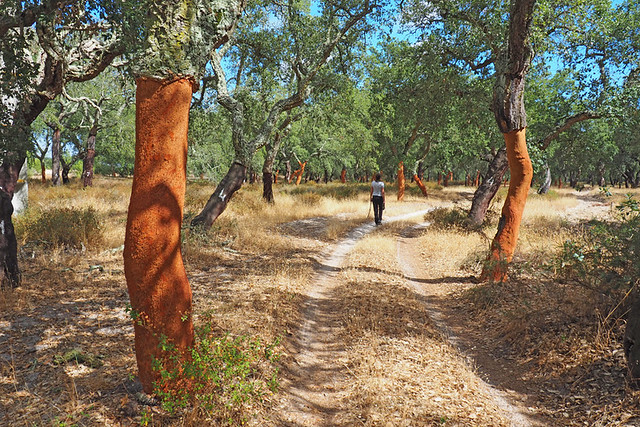 Normally the routes we walk are a lot longer. Shorter ones, like our cork forest trail, are subconsciously dismissed as being almost inconsequential. Of course that’s tosh and nonsense, short walking routes can be filled with more wonder than a 20km yomp through mind-numbing, unchanging terrain.

On a road trip around Scotland in September 2018 we notched up quite a few short walking routes we’ve never written about. So, to prevent them from curling up in a dark corner of my memory where they’re destined to be forgotten, here are some which deserve a wee bit of recognition. 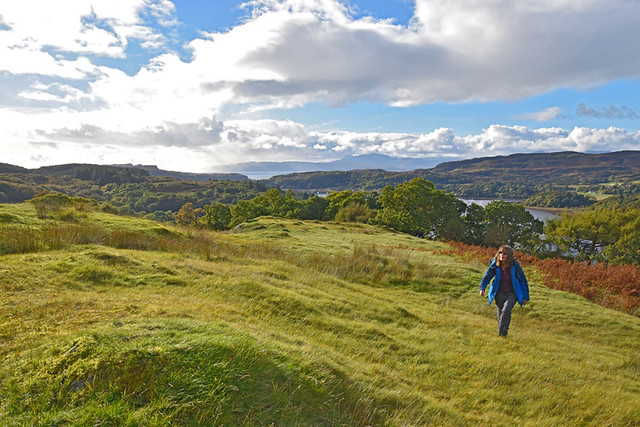 Ring of Bright Water – Loch Feochan near Oban
“There really seems little particular to do or see around this loch.” So states a website about Scotland. The only thing of interest is a lone white cottage with wild Highland views across the petrol sea to Mull. The cottage featured in a film which was responsible for a lot of greetin’ in our house, Ring of Bright Water. There isn’t much to do, but to see? There’s something to serenade the eyes just about anywhere in the Highlands and little Loch Feochan is no different. A short route recommended by the folk at our hotel, the 15th century Knipoch, took us along a grassy path lined by bushy conifers and moss-covered drystane dykes to an open hillock surrounded by crispy bracken. The tartan-coloured vista took in slender Loch Feochan, Mull, Islay, and a rolling landscape that had me wishing I was wearing my kilt. There might be many better views to be absorbed in Scotland, but this one is still grand enough to bring a tear to the eye, and that’s nothing to do with the breeze or any unlucky otters. 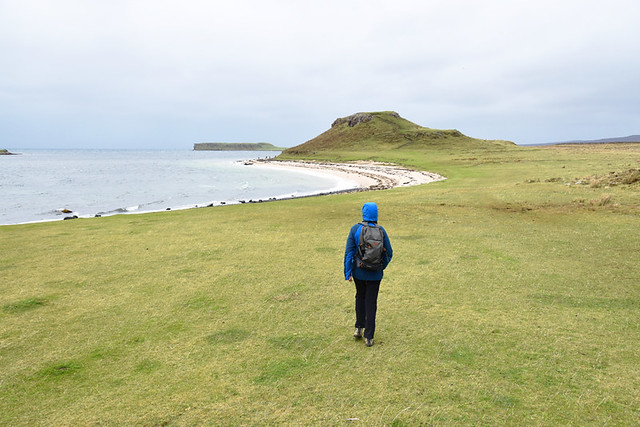 Tràigh a’ Chorail – Skye
Loud the winds howl, loud the waves roar,
Thunderclouds rend the air
Baffled our foes stand on the shore,
Follow they will not dare.
Yup, that just about describes the weather we ‘enjoyed’ during our brief little affair with Skye, especially when we braved the dreichness to walk the 1.8km from Claigan to the Coral Beach (Tràigh a’ Chorail), a route that was a tip from a local whisky-maker. The beach lies at the bare, bleak and beautiful tip of a peninsula where the bleached skeletons of red coralline have created an unusual feature, as well as a home for sea urchins and starfish. Offshore is the favoured haunt of harbour seals, not that we would be able to spot any among the boisterous swells. In some places the inclement weather would be a deterrent to taking to the outdoors, not here. Here it fits, it’s nature in all its wild and raw glory, with a billowing wind which would blow even Shelob’s cobwebs away. We lean into it, and then lean some more. It holds us firm at an unlikely angle. On Skye this is nature’s embrace and it exhilarates. 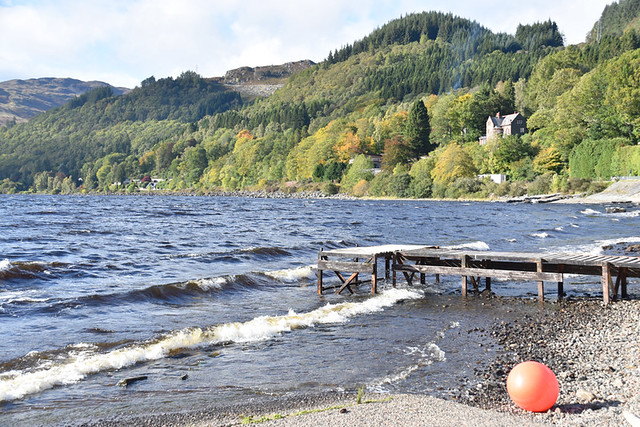 Massacres and faeries – St Fillans, Perthshire
St Fillans’ hand drawn village map, located where a narrow bridges crosses the river at the southern end of Loch Earn, is charming; the sort of village map you’d expect for a world created by Beatrix Potter. It shows us where we can find the zig-zag walk, a goat’s path, salmon larder, the old railway tunnel, and Willoughby Oaks where there’s a faerie stone; not shown on the map. Maybe the faeries like to keep it a secret. It takes us an eternity to find it as locals we ask give frustratingly vague directions. “Oh aye, it’s over there somewhere,” accompanied with a sweeping wave of an arm which tells us nothing. The railway path slices through the hillside behind the eastern side of the lake. It’s an easy, flat trail through an area which isn’t one of Scotland’s big drawers in tourism terms but which is serious clan territory. Rob Roy is buried not far away. Just offshore is Neish Island, the scene of the massacre of the Neish clan in 1612; an act of revenge for a perceived theft. On the opposite side of the loch lies a headstone commemorating a brutal series of events in 1589 which began when John Drummond, the King’s Keeper of the Royal Forest of Glenartney, had the ears of a hunting party of MacGregors cut off after they killed deer in the Royal Forest. He lost his head as a result; it ended up on his sister’s dining table with bread and cheese stuffed into his mouth. The whole MacGregor clan were subsequently sentenced to death. You could say Loch Earn is bloody beautiful. 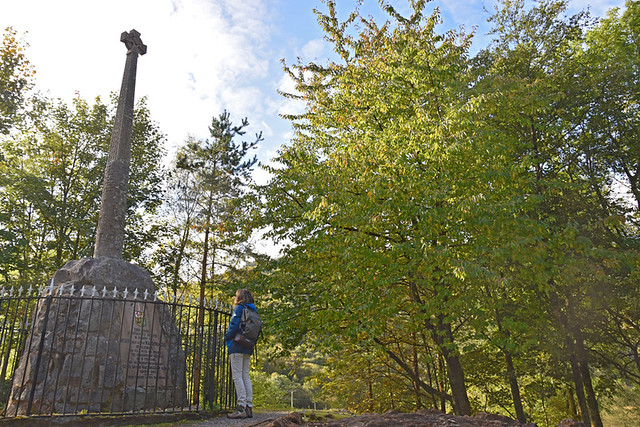 A tragic beauty – Glencoe
800 meters links serenity and sorrow. Glencoe is arguably one of the most romantic spots in Scotland. It is also the setting for one of its darkest moments; the massacre of 38 men, women, and children of the MacDonald clan by government soldiers who’d been welcomed into homes with open arms. On the banks of a glassy Loch Leven on a sunny day, looking toward the moody Munros which add gravitas to the shortbread box scenery, the betrayal in 1692 seems like it happened a long time ago in a galaxy far, far away. Strolling through the village with its pretty stone cottages and their thatched roofs doesn’t dispel the tranquil idyll ambience. It’s only when we turn inland, following a simple sign with ‘Massacre Monument’ painted on it, that the air takes on a chill which seeps into bones even though the temperature is moderate. There’s no pomp and circumstance surrounding the simple Celtic cross which marks the spot of the infamous deed. Standing in the shadow cast by the monument, reading the inscription “Their memory liveth for evermore”, 1692 doesn’t seem so long ago at all. 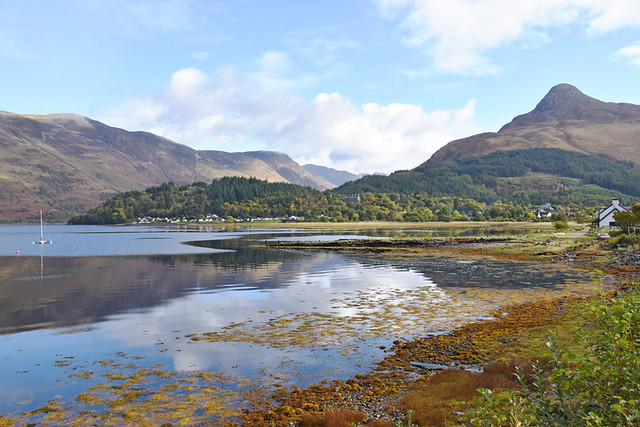