The sky is silent and sullen, its tantrum spent in a frenzy of hailstones and impromptu gusts which have left Lake Garda in a state of shocked silence, sodden pavements and littered leaves. Staring at the hand written menu in its glass case outside Osteria Al Restauro, I cannot understand its contents and can barely discern the fish from the meat and the antipasti from the dolci, but the glow of the restaurant’s interior is too inviting to resist.

Once inside, the waitress does her best to translate, assisted by a fat and well-leafed food dictionary. She doesn’t speak English and we don’t speak Italian but together we manage to discern that most of the dishes on the menu are fresh fish from the lake and that filetto di rombo in crosta di pane al nero di seppia, spinacini, capperi e pomodorini has something to do with lake turbot and spinach. I order the rombo. 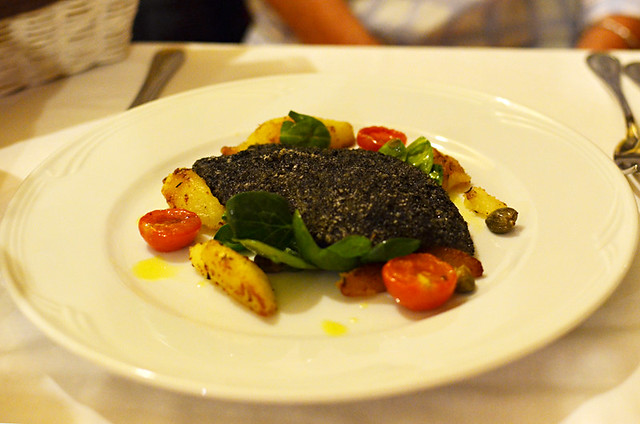 What arrives is the most succulent and flavoursome fish I have ever eaten. I do not say this lightly. I am lucky  enough to have eaten in some of Europe’s finest restaurants and to have enjoyed the culinary masterpieces of many a Michelin starred chef. But that lake-caught turbot will remain in my memory for a long time and if I ever get the chance to go back to Gargnano, it will be top of my food wish list.

Like so many countries whose cuisine we think we know well, once we arrived in Italy we found a hitherto undiscovered world of culinary experiences. Familiar foods took on entirely new personalities and menus featured dishes we’d never heard of, let alone tasted.

With so much water around, it’s not surprising that fresh lake fish is one of the main specialities of the region. My turbot encrusted in breadcrumbs with squid ink, spinach, and capers (translated with the luxury of time and the internet) may have been one of the culinary highlights of the trip but it was by no means alone. In the restaurant of the lovely Kinzica Hotel, overlooking Lake Iseo, a risotto was spiked with golden and crispy, battered slices of perch, an unlikely coupling resulting in a creamy and crunchy dish infused with flavour. At the same meal we were introduced to the local speciality of dried and salted sardines served on a bed of polenta, a simple and tasty dish that featured prominently on menus. In the Ristorante Italia on Isola dei Pescatori we relished a selection of lake fish – perch, trout and carp – simply grilled and served with olive oil and lemon. It didn’t have to be fancy to be excellent. 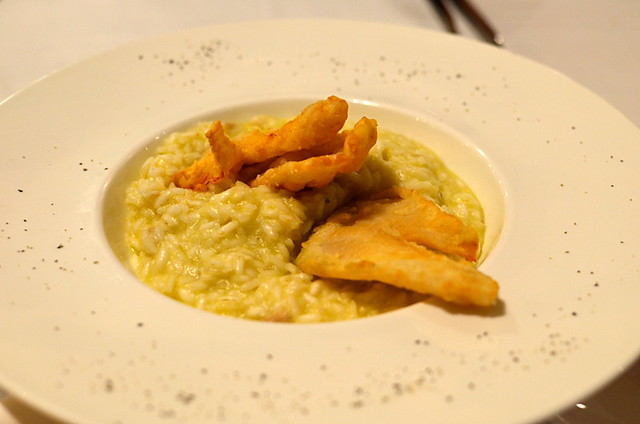 When it came to rice and pasta dishes, we learned more in this trip than in a whole lifetime of following Italian recipes. We learned that less is decidedly more when it comes to risotto. In the rice producing city of Novara, at Hotel & Restaurant Parmigiano, we savoured a tri-colour of Milanese risotto cooked to creamy, buttery perfection using only the finest arborio rice. The trio included a puce coloured risotto revelation cooked with red cabbage. At the Michelin starred Piccolo Lago on the shores of the small but perfectly formed Lago di Mergozzo, we devoured linguine carbonara with melt-in-the-mouth ham and a rich carbonara sauce served separately in an eggshell. 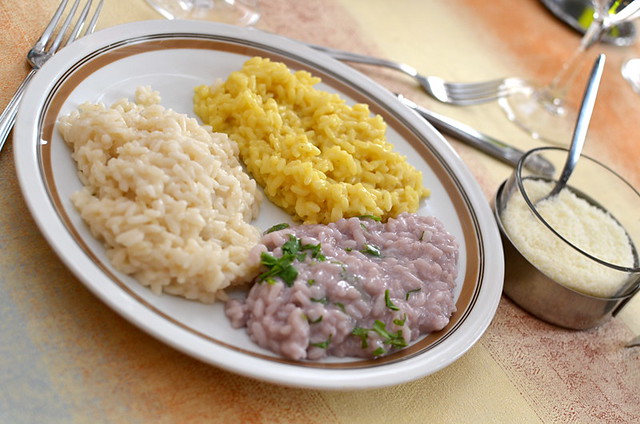 In the village of Soriso, above the southern shore of Lake Orta, the sumptuous Hotel and Michelin starred Restaurant Al Sorriso presented us with a ravioli dish that defied anything we had eaten outside of Italy. The al dente pasta yielded with just a look, revealing a centre of rich and savoury Bettelmatt cheese, produced only in summer and only at altitudes of 1000 metres and above. 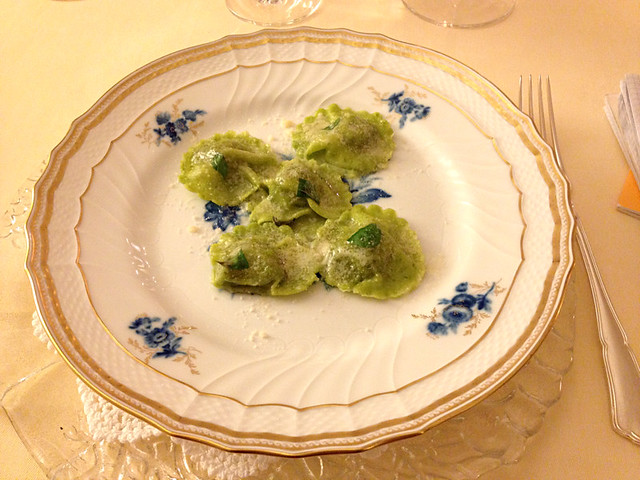 And these are just a taste of our culinary experiences, over a period of 12 days and within a small slice of Lombardy and Piedmont. It’s enough to make you learn Italian and start planning a return trip…

The Baia d’Oro fits exactly the image I had in my head of what a hotel on an Italian Lake should look like. We’ve struck gold. […]