I have always assumed that anyone who has reached the top of their profession in the culinary arts must have a wall of food diplomas and have spent the first third of their careers working alongside and learning from numerous master chefs. It’s an assumption that was blown out of the water when I found myself at one of Les Grandes Tables du Monde, at the table of two Michelin starred Grand Chef Luisa Marelli whose superb gastronomic skills have all been self taught. 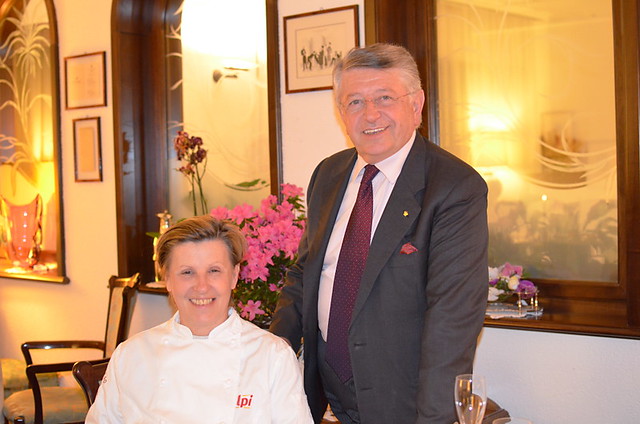 In 1981, shortly after moving into Restaurant Al Sorriso, Luisa found herself in charge of the kitchen when the chef suddenly had to return to Switzerland. Having worked alongside Angelo in his starred restaurant in Borgomanero for 10 years while raising a family, Luisa already had a passion for cooking and with Angelo’s help, she determined to hone her skills.
“She asked me to buy her the very best recipe and technique books that I could find,” Angelo recounts. “I did as she asked and she worked through them all tirelessly.” Before too long Luisa had moved seamlessly from mum to master chef and been awarded her first Michelin star, followed by her second and her third.

Nestling in the hills above Lake Orta in the picturesque, medieval village of Soriso where she grew up, Luisa and her husband Angelo Valazza own the Restaurant Hotel Al Sorriso which, until they decided a couple of years ago to close every Monday and Tuesday, burnished brightly with three Michelin stars. Their decision may have lost them one star but Luisa’s extraordinary gift for food still shines brightly in the culinary firmament and the time they now spend at their mountain retreat yields the superb seasonal ingredients that take centre stage in the kitchen. 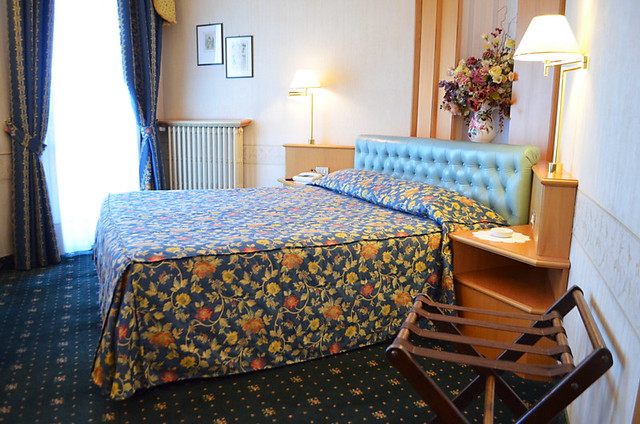 As a hotel, Al Sorriso is old school luxurious and warmly welcoming. What the rooms lack in floor space they make up for in comfort with thick pile carpet and rich furnishings in Royal blue and gold. Bath robes are velvety soft and fluffy, the shower is roomy and powerful and the bed is large and exceedingly comfortable. With views over rooftops to the snow capped mountains beyond, this is an idyllic place in which to unwind. But it’s as a restaurant that Al Sorriso really excels, and dinner in the hotel is the epicurian highlight of any stay.

Restaurant Al Sorriso
In the genteel dining room, antique ornaments, a Spode pottery collection and elegant period furniture set the scene while crisp white linen tablecloths provided the canvas for Luisa’s creations. It was a Wednesday night, early in the season, and only one other table was occupied. One glance at the beautiful girl as she glided into the room, followed by her handsome date and, with no facts to clutter our assumptions, we  decided they were a Serie A footballer and his model girlfriend. Sucking in stomachs and tightening abdomens, we sat up straight, smiled and nodded our hellos. 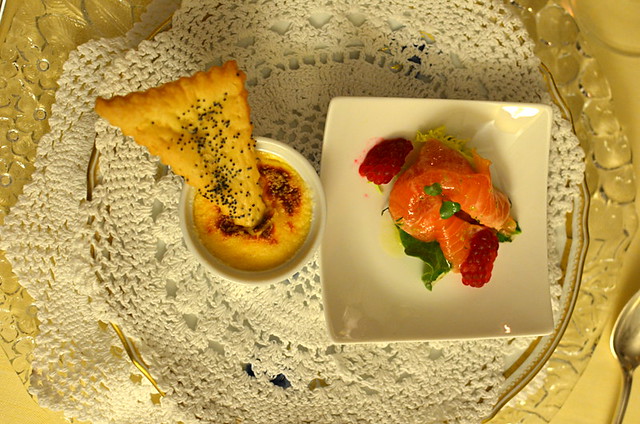 A chilled glass of crisp, light Contratto champagne accompanied by Parmesan crème brûlée with Parmesan pastry and marinaded smoked salmon set the dining experience off to a sensational start. The crème brûlée was creamy and rich without being too heavy and the light-as-a-whisper, Parmesan pastry dipped in the brûlée simply melted in the mouth. I felt a bit sorry for the smoked salmon which, although perfectly delicious, paled a little in comparison to its exotic companion. 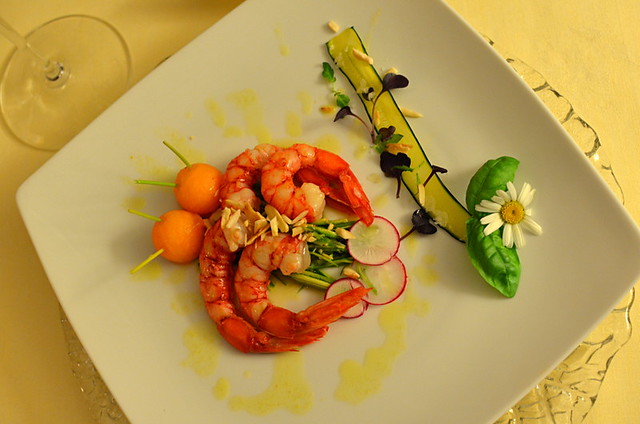 Sicilian red shrimps provided a succulent taste of the sea to which a crisp courgette salad, honeydew melon and chives in a mint and lime dressing added crunch and the fresh, sweet taste of summer. Presentationally, the dish was a masterpiece and we were to find its perfection repeated in every one of our courses. Luisa’s art for presenting her dishes in creative and sometimes whimsical ways is a joy to experience. 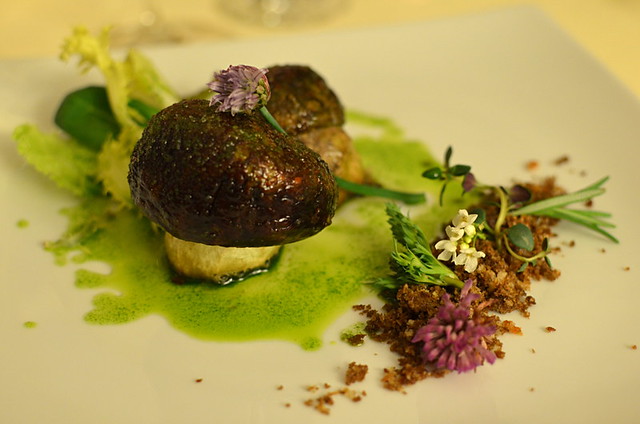 The first Porcini mushrooms of the season made their appearance in a delightful forest scene that brought smiles to our faces. Each of the fat mushrooms was filled with chopped mushrooms, standing on a ‘meadow’ of olive oil and pesto and alongside a bank of ‘earth’ of baked breadcrumbs with chive flowers. Luisa allowed the flavours of the mushrooms to dominate, bringing their pungent perfume to the plate in a fun design that cleverly provided colour, texture and contrast to complement them. 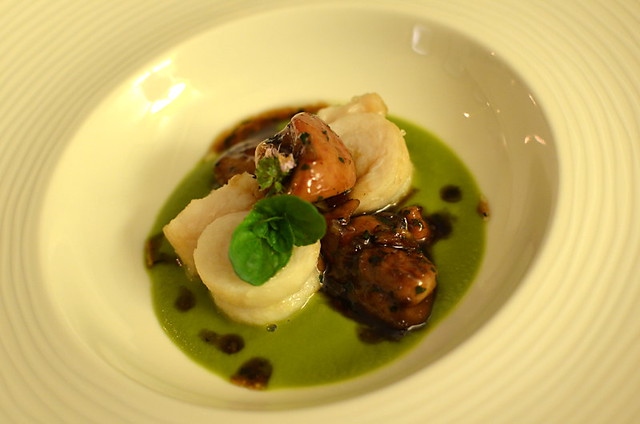 Glancing surreptitiously at our celebrity fellow diners (by now they were both definitely famous as far as we were concerned) I noticed that the girl had nibbled at her Parmesan crisp and crème brûlée but had since not ordered a morsel. As two plump fillets of Whitby sole with sweetbreads arrived in front of me, I stopped trying to suck in my stomach and decided that some careers were simply not worth the sacrifice. 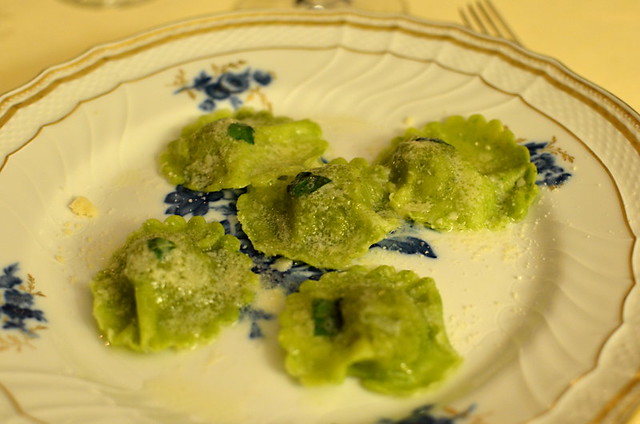 Exquisite local Bettelmatt cheese provided a new taste sensation for us, enveloped as it was in velvety ravioli. Again, there was nothing to detract from the flavour of the cheese, it was simply prepared and presented and it worked beautifully. Our meat course of succulent Piedmontese beef in a Barolo wine consommé, topped with a ravioli of marrow and chives scattered with hazelnuts, and accompanied by creamed potatoes and fresh asparagus spears was as lean and tender as veal and but with the full flavour of finest beef. Absolutely delicious. 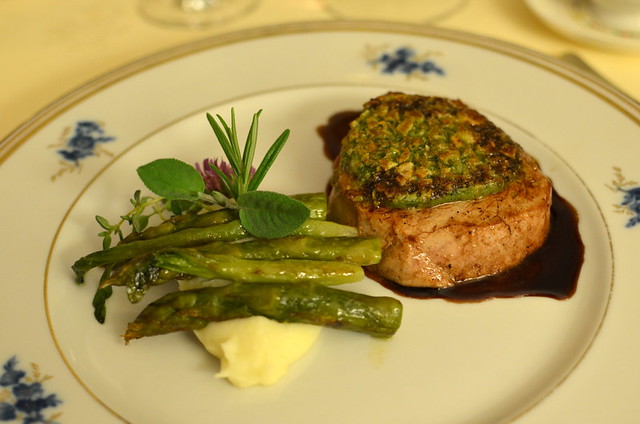 To round off our feast we enjoyed a palate cleanser of strawberry sorbet in a pool of cava infused with strawberry liqueur, and ended with Muscatel zabaglione with vanilla ice cream and strawberries and ladyfingers biscuits. Sated and happy, we sat back and relaxed over the last of our wine and petit fours before wending our way upstairs. 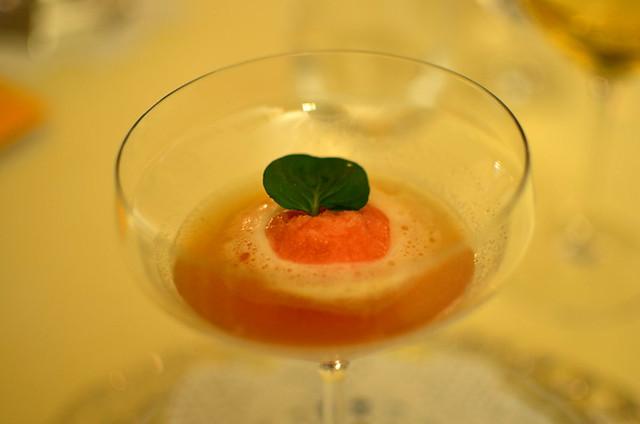 Al Sorriso is a very special place where Angelo and Luisa welcome you into their home and make you feel as important as the famous guests who have enjoyed their hospitality over the years – Sir Alec Guinness, Sir Alex Fergusson and Chancellor Kohl among them, and not forgetting whoever it was who shared the dining room with us. I wonder if they made up some scenario about who we were… Hmm, maybe not.

Novara, Off The Tourist Trail in Piedmont

Despite its impressive architectural pedigree, plethora of pretty piazzas and historic battles, Novara never really grew much beyond about a 20km radius of its city walls and today, lies just below the tourist radar… […]