One step to move from a spic and span valley of pristine pastures and timber houses with sloping roofs to a wild woodland world.

One step from being directed by a smiling Austrian woman, via an imperceptible path leading through her neat garden, to standing face to face with a deer.

Austria, you’re an intriguing country for exploring on foot; positively schizophrenic in nature – a Dr Jekyll and Mr Hyde of a location. The extremes make for interesting walking… as we’re finding out. 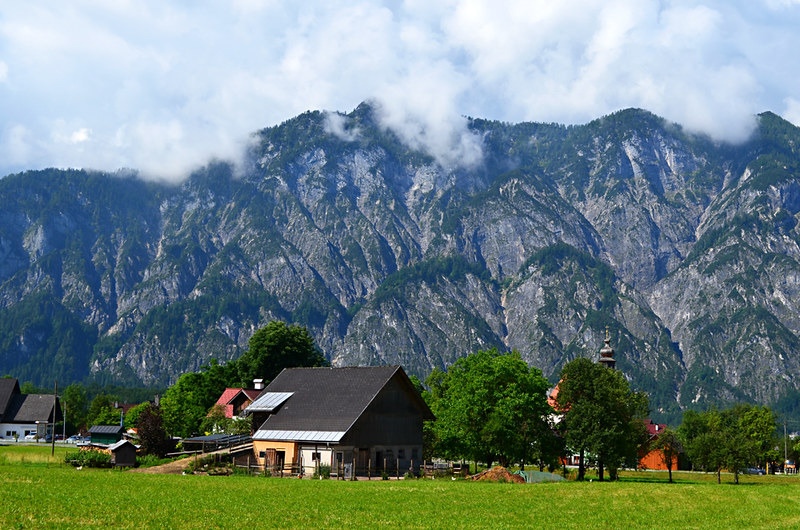 The doe looks at me for the briefest of moments then bounds silently back into the obscurity of the forest. It’s a thrilling start to our walk.

We traverse the hillside; the homes, towns and villages of Goisern pepper the landscape just beyond the tree line to our left, dense forest masks what lies to our right. The path climbs easily, away from the valley floor. Occasionally we emerge from the forest to cross a country road. At one we arrive at a fork where the signposting disappears and we’re unsure which direction to take. A young couple stoking a barbecue in their country cottage garden spot us and come to our aid, pointing to a narrow gravel path that leads around their house. To a person, everyone has been helpful and friendly. 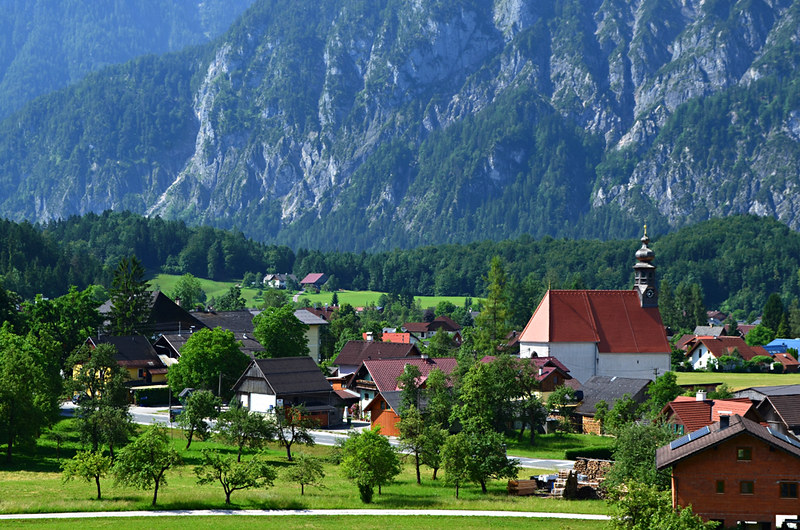 The track takes us back to the land of wooden huts and curious cows with bells around their necks – bona fide Sound of Music scenery. The sheer, sharp peaks that enclose the valley temper any thoughts of tweeness; Hobbiton at the foot of Mount Doom.

Our path rises more steeply and we ascend to a farm where the trail seems to end at a dense thicket. The only other dirt track leads right into the side of the farm. Once again we hesitate. Both are dead ends. The farmer emerges from a door where a flag with bees on it suggests it would be a good place to buy honey. He waves us towards the house. It seems an unlikely route but who are we to argue? As the path curves slightly we discover it doesn’t actually lead into his house, it passes through a wooden tunnel separating the building from a chicken coop. Not quite a dead end.

We wind up the hillside, the grassy meadows becoming wilder as we climb; the grasses growing longer, intermingled with wild flowers that break up the sea of green. Once again we enter the forest and are promptly nearly mowed down by a teenager (girl) in full BMX mountain bike gear… on a unicycle.

There seems to be a fad of extreme woodland unicycle riding in this part of Austria. We’d seen others the previous day. We’d also spotted a circus in a field and had put two and two together, apparently incorrectly. 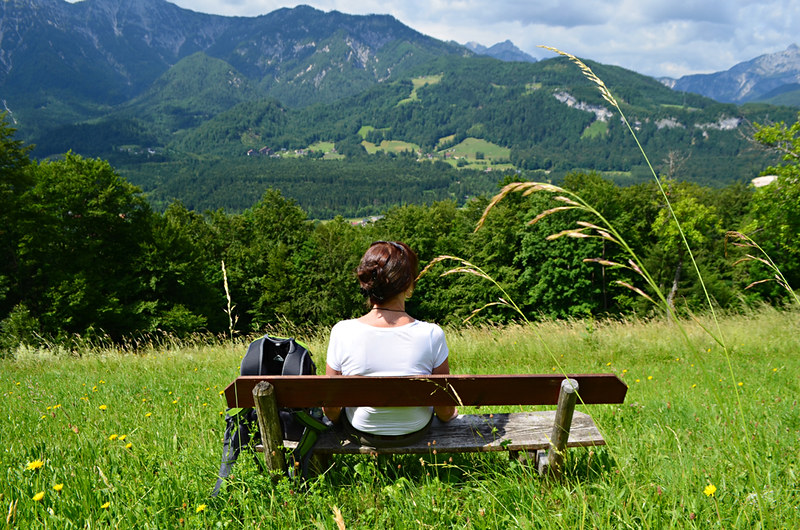 Leaving the uni-bikers behind we climb to more tranquil pastures and a perfectly placed bench below a wooden hut. It’s a sunny and pleasing place to rest awhile to enjoy the Austrian vistas. Views across the wilder end of the vale to other mountain ranges keep us glued to the wood for longer than we planned. Our journey onwards is a brief one as shortly after dragging ourselves away from the bench, we arrive at the Rathlucken Hütte.

The wooden lodge sits high above the valley. It’s our first Austrian lodge and we soon learn two things. Although these lodges sit in beauty spots and at the crossroads of walking routes, many of the people who frequent them haven’t actually arrived on foot. They’ve cheated. The second thing is that most people order hefty, hearty meals or bowls of soup. Asking for a snack and water to take away doesn’t seem to be the norm. But, once again, people bend over backwards to help and we end up with a couple of ham baguettes and re-filled bottles of water anyway. 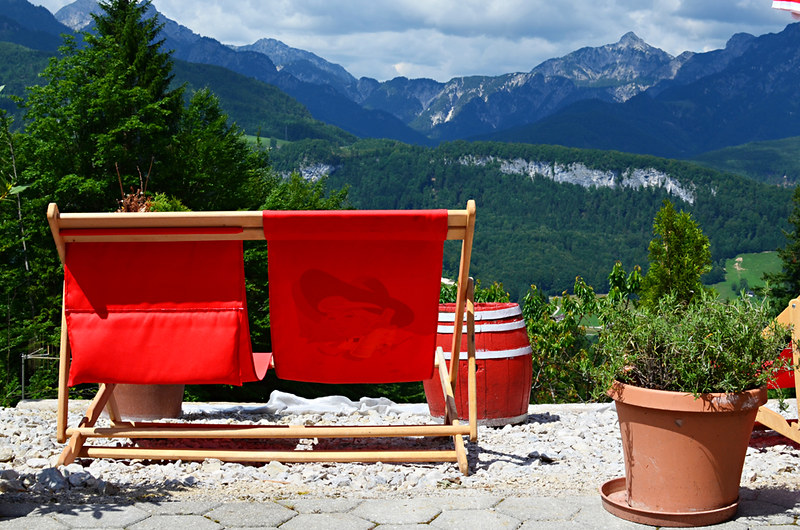 I partly envy the people settling down for a long lunch overlooking the valley. The Rathlucken Hütte seems a good place to spend a lot of time, a quirky double deckchair in prime position looks particularly inviting. But Ewige Wand beckons.

From this point what had been a great walk goes up a level, becoming extra special. A twisted tree face greets us as we once again enter the forest. He’s quickly followed by a dwarf, various woodland animals, more tree faces and a devil – a truly enchanted forest. Each comes with a tale; a local legend. 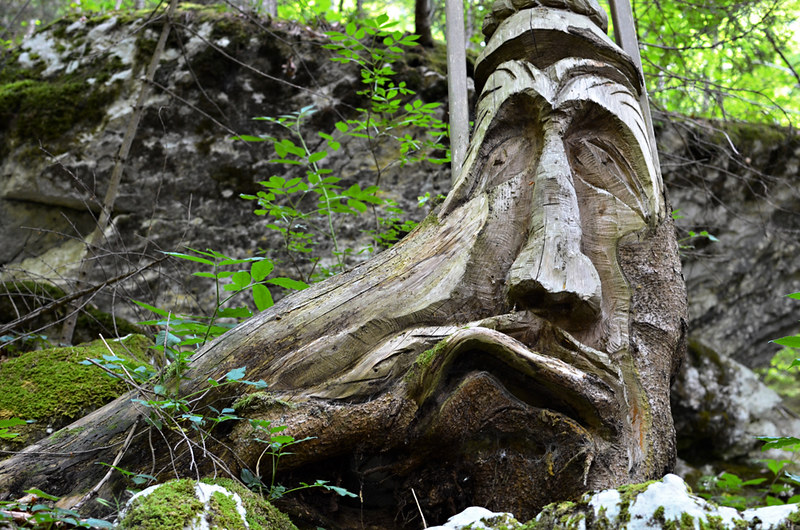 The creatures of the forest keep us company till the forest is replaced by a wall of granite. Ewige Wand. Dragon country. One called the Lundworm lives in a cave here. 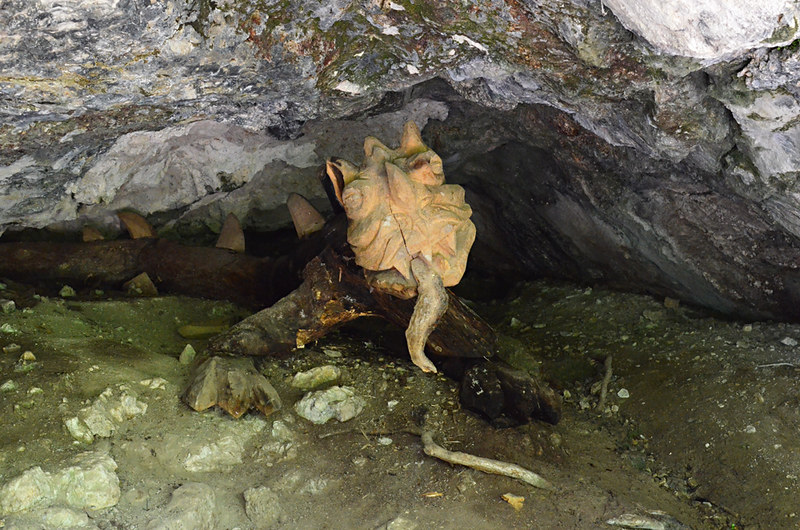 On one side a rock wall rises steeply above us, on the other it falls away to the valley floor. A narrow path with a steel railing barrier dissects the rock face. We don’t suffer from vertigo so it isn’t a problem. It might be for some. 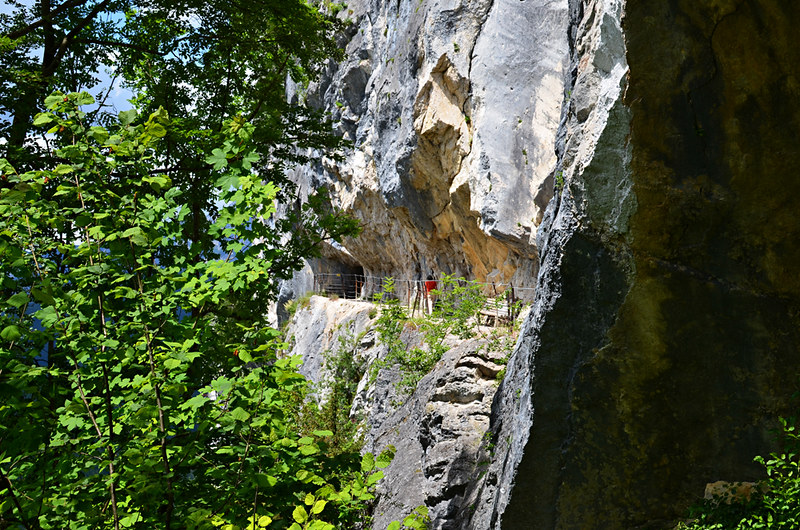 The path disappears into a short tunnel. Emerging on the other side, views open out across Goisern all the way to Hallstätter See and the Dachstein Mountains. They are enticing enough to have us forget the drop below and we lean on the railing as if to get an even better view. Another conveniently placed bench is probably a more sensible option.

It’s a sensational pay off for a walk that has everything and another spot to linger and marvel at the wonders nature lays before us. 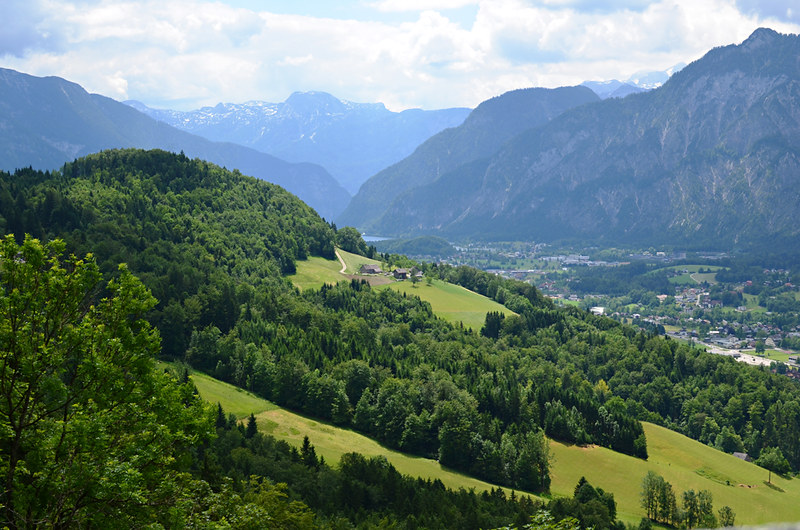 Ahead lies two possible ways to proceed. One runs through another tunnel, this time longer and darker. The other is via steel pegs and an iron cable rail jutting out from the rock face. 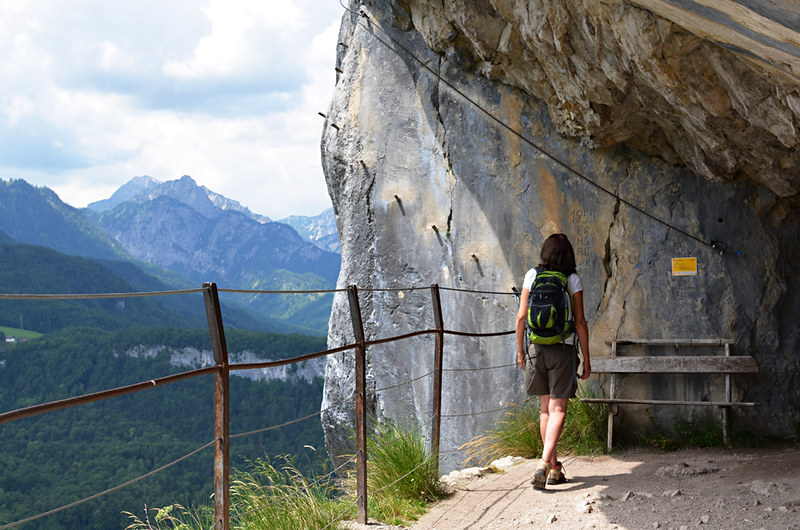 The discussion regarding which to take to begin our return route back to our hotel is a very short one.