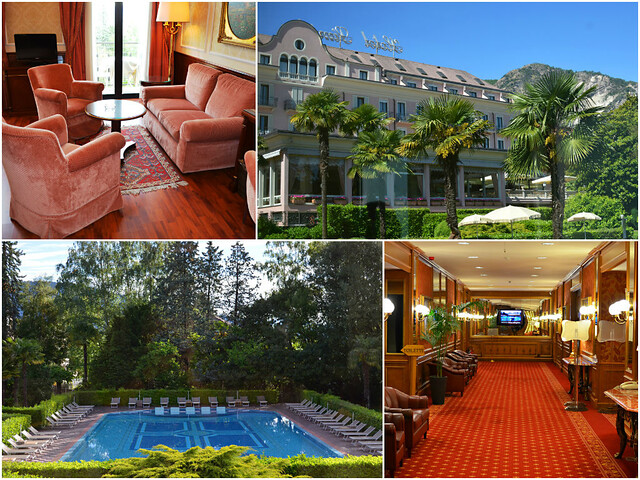 Hotel Simplon is within a stone’s throw of Lake Maggiore. A short distance away is the centre of Baveno, once a haunt for Europe’s richest and most powerful movers and shakers, where ferries transport you to island paradises a.k.a the Borromean Islands. And an arty tunnel links you with all the amenities of the Grand Hotel Dino on the lake itself. Those ingredients will do nicely for starters.

Buzz Trips’ View
After staying in a series of small, intimate hotels, including on the Isola dei Pescatori itself, the grand interior and gardens of the Hotel Simplon made for a refreshingly airy contrast. The opulent décor throughout the hotel is fitting for a location that is used to playing host to kings and queens.  Yet there’s no stuffiness, simply classical design mixed with the friendly, professional service we’d come to view as normal on our explore of the Italian Lakes. Whilst we love the intimacy of small, family run hotels, it was a pleasant change to have a lot of space within the grounds of two hotels to wander about. Although significantly larger than most of the other hotels we stayed at, the Hotel Simplon had enough little quirks to give it an individualistic personality that can sometimes be missing from similar sized hotels.
Its position makes it an excellent base from which to explore Lake Maggiore and smaller, ‘secret’ lakes like Mergozzo where the magical Michelin star restaurant, Piccolo Lago is located. There’s also a supermarket across the road which is very, very handy for stocking up, especially if you’re planning on doing any walking and need plenty of water supplies. 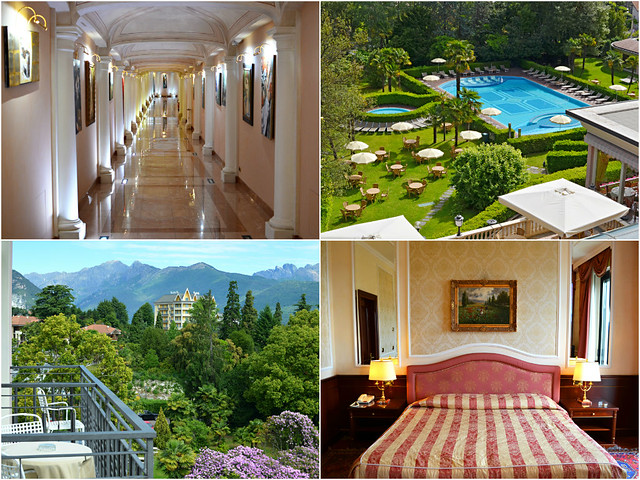 Flowing velvety drapes, soft furnishings, a bed big enough for an over-sized king and a colour scheme that is an aristocratic blend of gold and vermilion. Polished floors, a glittering chandelier and flock wallpaper whose design is broken up by paintings of poppy fields in gilt frames finished the classical Italian theme off nicely. A room to make you feel special. A flat screen TV and minibar added those modern essentials whilst the bathroom was large with a marble finish that joined in with everything else to give the room a royal ambience.
The terrace is more conservative in design with views over Lake Maggiore and the Simplon’s gardens and pool. There is wifi but it’s only free for two hours. After that it’s expensive. 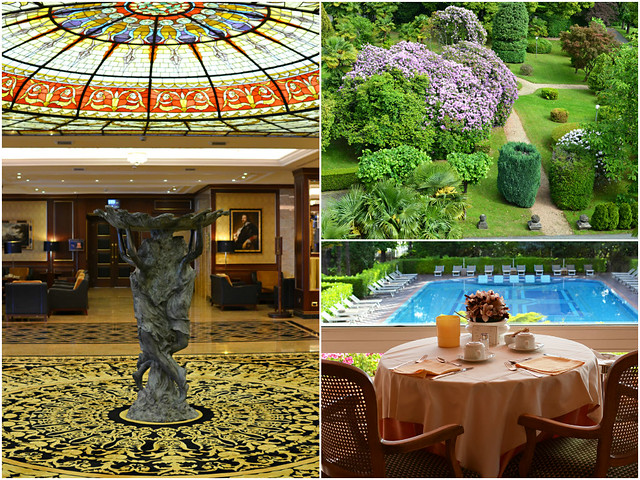 There is a choice of pools, either surrounded by typically beautiful Italian gardens or on the lakeside; restaurants that range from creative cuisine in stylish dining rooms to casual drinks and snacks on the lawns. As we were out exploring during the day and dining at the Piccolo Lago at night, we didn’t get to try any of the restaurants or cafés.

Breakfast is served in the Simplon’s main dining room. Although the hotel was relatively busy, we were able to grab a window seat overlooking the gardens and pool – a very tranquil spot to come around with a cup or two of Italian coffee and a plate of prosciutto and local cheeses from the buffet.

The gardens themselves are good for a stroll, especially if you’ve got a juicy book that would be enhanced with atmospherically attractive surroundings. Also within the grounds are tennis courts and a five a side football court for budding Balotellis.

More relaxation is to be had at the spa and wellness centre reached via the arty tunnel – a quirky touch. The underground tunnel is lined with a selection of striking paintings, some instantly recognisable, others less so and more intriguing. Trying to identify various artists’ prints along the way adds a ‘game’ element to walking between the two hotels.

The Hotel Simplon is a good choice for people who want an attractive base from which to explore the Lake Maggiore area as well as enjoying the space and facilities that come with staying at a decent-sized hotel (in this case two).

A Night on Isola dei Pescatori, the Island of Fishermen

We draw close to Isola dei Pescatori and its diminutive size is rammed home. Under 400 metres longs and barely 100 metres wide, it’s smaller than any island… […]