They might not be tumbleweed, but there are definitely skeletons of some type of dried out plant blowing through the streets of the tiny town.

The wind has puffed up its cheeks and is blowing a hoolie.

We sit in the car, undecided.

There’s a yellow alert weather warning in place for high winds throughout the day. Normally we wouldn’t take to the trail in these circumstances. As there are no trees about to squash our heads, the potential danger is reduced significantly. Yellow means caution. If it was orange there would be no question, we wouldn’t be walking.

Ironically, the car is parked under one of the only trees for miles around. It sways gaily, its precious shade dancing around the plaza in front of a small church as though celebrating a fiesta. The car is in more danger than us. 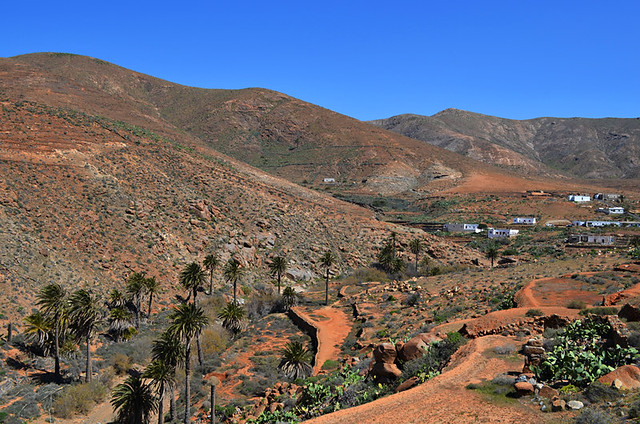 We decide to risk it.

For a couple of hundred yards, as we’re buffeted and tugged at, we wonder if we’ve made the right decision. There is nobody on the streets… but that’s probably always the case in this backwater, irrespective of a wind that feels the need to blow off steam.

Once we leave the town and enter the mouth of a wide, amber ravine any doubts dissipate. The wind doesn’t, and it roars past our ears without pausing for breath. It’s a constant and unwelcome companion. But the scenery is distracting; orange hills around us are vibrant in colour, soft in shape – feminine curves that seduce the eye… when the eye isn’t watering that is.

The path serpentines gently up the hill towards a saddle between two peaks. Most of the time the wind mugs our ears, making conversation impossible. But as we climb higher, there are pockets of calm in the folds of the ravine. Pockets where we can momentarily regain our sanity. This wind could easily drive you crazy.

The sky is deep blue and there is no shade whatsoever. In photographs it might look like perfect weather, in truth it makes for challenging walking. The sun beats down, but the wind is cool and would rip protective hats from our heads. 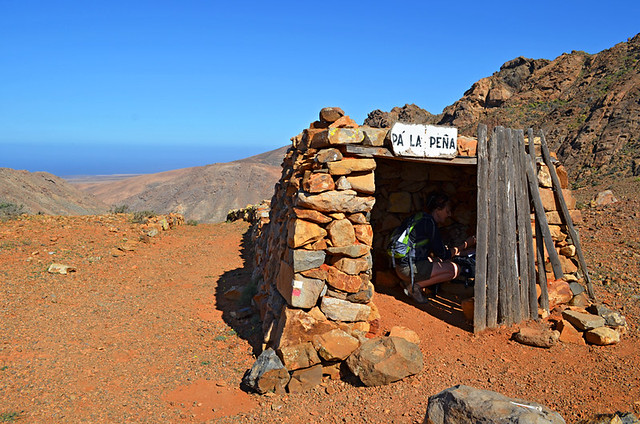 The saddle comes into view above us, both a welcome sight and one to be be slightly feared. The wind is going to be at its strongest as we cross over to the other side.

G-forces pull at our cheeks as the path levels out. We need to take a map reading and write notes, but to try to do so would be foolhardy. Thankfully there is a refuge; a Hobbit-sized, stone hut whose opening, facing the way we’ve come, suggests the wind blows from the same direction most of the time.

Inside is bliss; a sigh-inducing respite. The thick stone muffles the howls as well as providing shade. We allow ourselves five minutes rest before we continue. From this point there’s a descent which we’re slightly concerned about thanks to the gusting gale.

The concern proves unfounded. The path winds down easily and gently, plus the wind magically drops a few minutes after we leave the saddle.

From here on we can simply enjoy the route and views of a valley that increasingly take on a North African appearance. 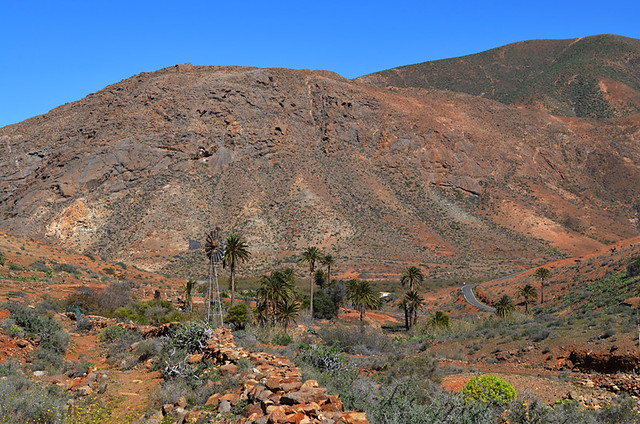 The hills are the colour of ripe tangerines with sparse palm groves adding splashes of green. As we reach the valley floor the palms are joined by Chicago windmills, adding a western slant to an otherwise biblical terrain.

Abandoned houses with crumbling stone and mud plaster walls add to the feeling that this is more akin to walking in the Atlas Mountains than walking on the Spanish, Canary Island of Fuerteventura.

Our route veers away from a whitewashed settlement and into a completely different world where small pools and thickets of whispering cane join the palms along the path. The red earth turns to grey, smooth rocks and we skip across pools whose very existence surprise us.

Ahead is a man-made lake filled with dry, red soil rather than water. When we asked before we set out if it was ever filled with water, the reply was ‘no, not really”. 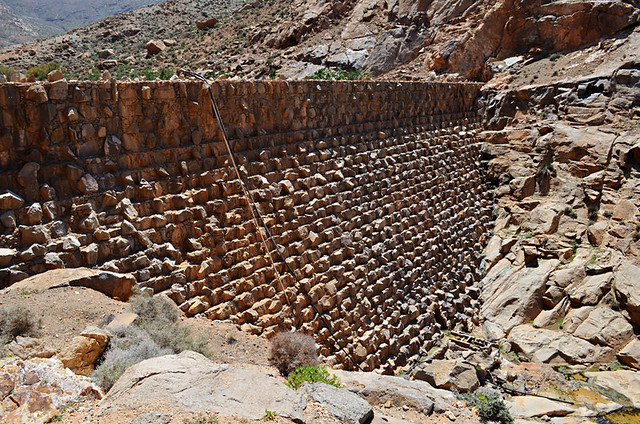 And yet at one end is a fortress of a dam that looks as though it’s waiting for a day when it has to hold back floods of Noah’s Ark proportions.

Beyond the dam lies treasure.

A narrow path dissects a rocky canyon with elephant skin boulders that contrast against the amber lands in the distance. Unfortunately the wind returns, threatening to lift us from the slab path and dump us in one of the jade pools that fill hollows in the rock below us. 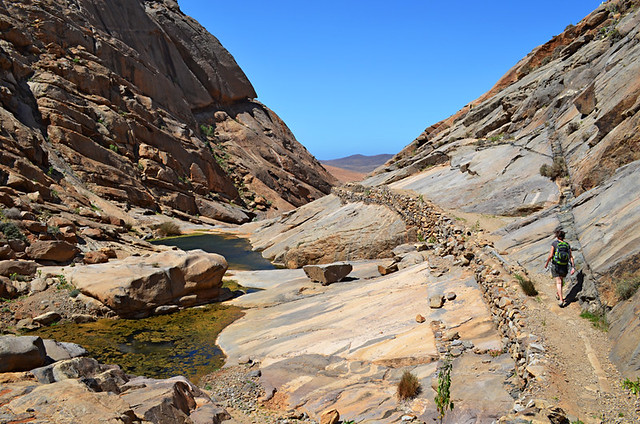 The scenery is quite unlike anything we expected from this arid island and we stand for a while to breathe in its beauty or, more accurately, we sway to and fro and breathe its beauty in.

A few more steps and we turn a corner. Our goal comes into sight; a tiny white building perched on the rock – the Ermita de las Peñitas. The place where water in the pools below it doesn’t make you wet (we didn’t test that one) and where two Franciscan friars, after seeing a light emitting from inside the hillside, dug through the rock to discover an image of the Virgin de la Peña. 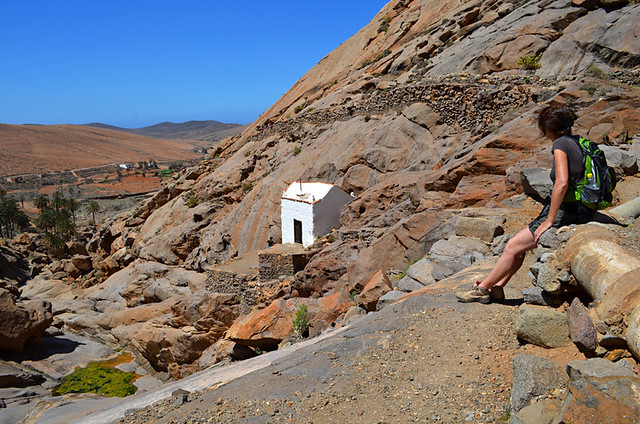 The final approach involves negotiating a short but exposed stone staircase. It’s quite a nervy affair but we brave it and within seconds join the ermita perched on the rock face. It’s exhilarating. We feel triumphant. The views are intoxicating and it sounds as though the wind is laughing with us.

Except it isn’t the wind.

Sitting on a stone bench at the side of the ermita are three, pre-teen local boys munching bocadillos.

They look as light as kites.

And there was us worried about the yellow alert winds.