The hedge is full of shiny green fruit the size of small papayas. Andy stops and inspects one. We’ve no idea what they are. Fate intervenes with impeccable timing to answer our questioning expressions.
Although we’re on a quiet path outside of Agulo, at that precise moment a man with a deeply tanned face framed by a snowy beard walks past carrying a bulging carrier bag. He looks a bit like the figure of the Guanche warrior in Casa de los Balcones in La Orotava on Tenerife; a much shorter version.
“Son parchitas,” he says. Or at least that’s what we think he says as his accent is as thick as the palm honey produced on La Gomera.

We’d passed Pepe ( aka José Ramón) before lunch when he was trying to steer a strong-willed billy goat nearly as big as himself through the streets. The goat was gone, replaced by a bag of parchitas (a South American term) which are more commonly known as maracuyas and even more commonly as passion fruit. 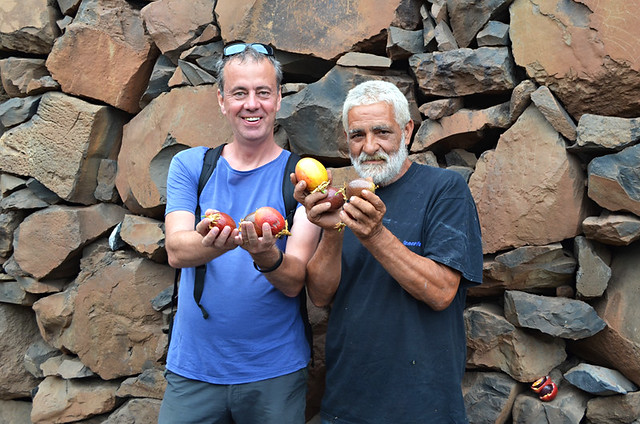 He cuts one open and hands us a half each. The jellied seeds are sweet and tart. Pepe beams as we make suitably appreciative noises. He pulls a smaller fruit from his pocket.
“Más dulce,’ he grins as he cuts it in half.
He’s not lying, it is sweeter and tastes like nectar. We make more appreciative noises and Pepe reaches into his bag to grab handfuls of the fruit which he stuffs into Andy’s rucksack. He wants nothing for them, he’s just happy to give them away to two strangers in exchange for a photo – which we’ve still to figure out how to send to him.

We thank Pepe and continue on our way, one of us with a substantially heavier rucksack perfumed by the sweet aroma of ripe parchitas. This is typical walking on La Gomera.

Hotels with personality, Waldhotel Fehrenbach in the Black Forest

I could give you a raft of reasons why the Waldhotel Fehrenbach in Alpersbach, little more than an extended meadow in Germany’s Black Forest, sticks in our minds as being a hotel with a stand out personality. […]