Four men and one woman are in a dark, dusty basement. One of the men is tied to a chair. The woman is addressing the man in the chair, her voice is quiet but there’s a sinister tone to what she’s saying;
“God knows where you’ll be tomorrow but I should tell you that eventually you will tell us about the people you work with, and the longer it takes, the more painful we’ll make it.”

Outside, in the glaring sunlight, thousands of people are gathered in the centre of a vast arena as horses and riders are lined up behind a rope. Crammed into the centre of the arena beneath a relentless sun, tension in the crowd mounts. Hands are raised above heads, swirling coloured scarves, and there are shouts of encouragement to jockeys as the rope is pulled high and the horses set off at break-neck speed, thundering around the bends, their hooves sending small clouds of dust and sand flying into the hot air. Back in the basement, shots ring out, the man tied to the chair and the woman both fall to the ground and a high speed pursuit begins as two men hurl themselves through narrow tunnels and down steep stone steps, mirroring the thrilling action outside. 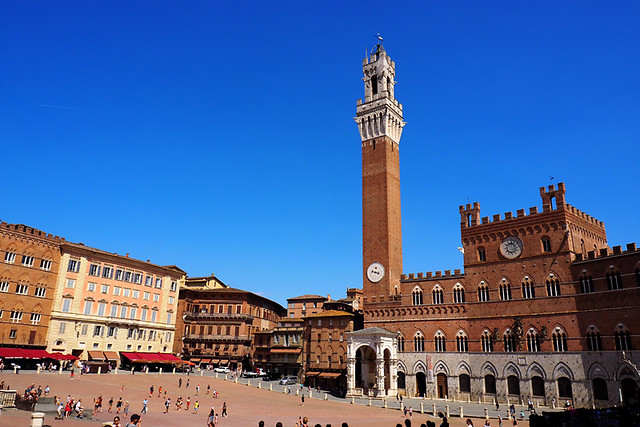 We’re standing in Siena’s famous Piazza del Campo, watching the opening scene from Quantum of Solace which was shot here. I’m holding the phone at eye level with arms extended so we can match small screen to living canvas, trying to place the horses and riders in relation to the action being played out in front of us.
“There,” says Jack, pointing to a small side street alongside the arches of the Palazzo Pubblico.
“Okay, so if you stand just about there,” I tell him, “I’ll take the shot.”

Jack has been a James Bond aficionado ever since he was a boy. I don’t just mean he’s watched the movies, I mean he’s read every Ian Fleming novel and studied James Bond in depth. Coincidentally (or is it?) wearing the shirt that resembles the one worn by Daniel Craig in the Madagascar scene in Casino Royale, Jack stands, hands thrust into trouser pockets, lips slightly pursed. In his mind, he’s James Bond, I can see it on his face.
Click. 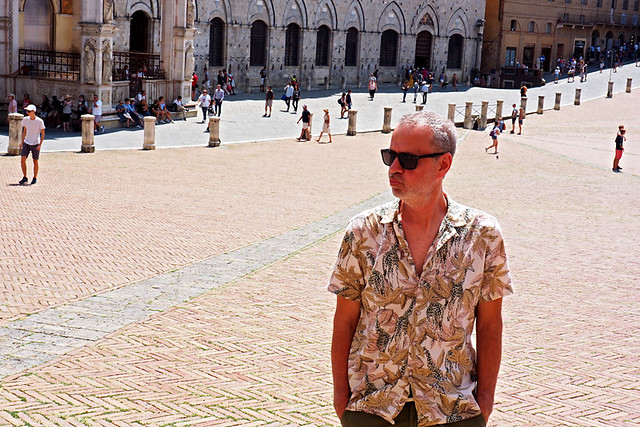 Strolling Siena
The receptionist at our hotel, the sublime Palazetto Rosso, gave us a map and showed us how to get to Piazza del Campo and Piazza del Duomo, no more than a ten minute stroll away, she assured us. She was right, everything seems to be in easy stroll and all streets lead to the Piazza del Campo but it’s taken us an hour or more to get here, stopping every few metres to photograph an endless runway of visually compelling models – a narrow, cobbled alleyway lined with crumbling buildings; a stone archway framing a Mediaeval church; gaudy coloured street lamps; a series of wooden dining tables stepped along the side of a street so steep it’s a gravity-defying miracle the buildings haven’t all slid down it and ended in a crumpled heap on the piazza. And now here we are, in this magnificent, horseshoe-shaped arena surrounded by perfectly preserved, grand Mediaeval buildings, everything from tiled piazza to the highest brick in the Torre del Mangia that singular colour of soft dark earth from which the name ‘burnt sienna’ derives. 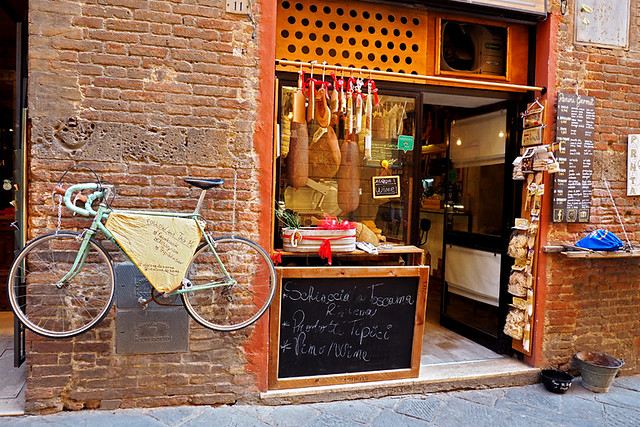 When it comes to quintessential Tuscan charm, Siena delivers by the bucket load. Winding our way through the predominantly traffic-free streets, our attention is constantly sidetracked by the rich array of food offerings that sit cheek by jowl with Gothic architectural gems. We pass gelateria after gelateria, lines of people waiting to be served at each, while around them those who’ve made it to the counter tease with looks of ecstasy as they dip and lick their way through tubs and cornets. Tiny shop windows looking they haven’t changed in centuries, display salamis, hams, cheeses and dried mushrooms, an aroma of truffle infusing the air outside their front doors. Tables, chairs and parasols line narrow streets and fill small piazzas, their occupants enjoying fat-crusted pizzas whose slices reluctantly pull apart in a cat’s cradle of melted cheese, and plates of pasta topped with rich sauce and drizzled in aromatic olive oil. 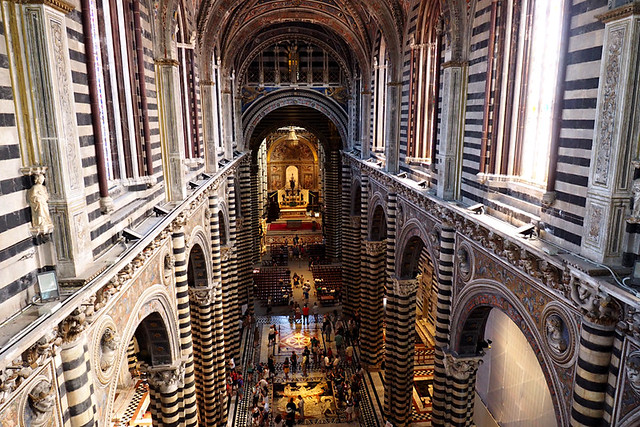 Drawn inexorably to the Piazza del Duomo where a treasury of architectural jewels jostle for attention, we buy a €20 ticket which gets us into five of the six monuments and museums in the piazza, including the so-called Gate of Heaven. Restricted to just 15 people at a time, the Gate of Heaven takes us up a spiral stairway into the dome from where we peer down on the crowds who ebb and flow across the marble mosaics below. Walking amongst the tools and work space of carpenters, we thread our way along the upper reaches of the Cathedral, briefly stepping outside into the white glare of roof space and mesmerising views beyond. 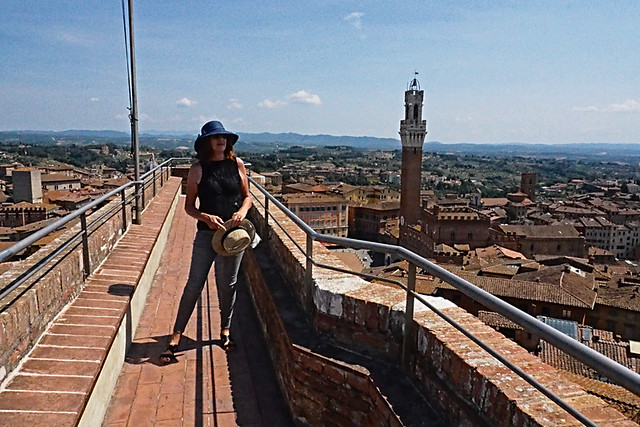 Highlight of our Duomo visit is the Facciatone, or unfinished extension known as the Duomo Novo. We have to wait 35mins for the people ahead of us to return before we’re allowed to climb the never-ending stairs that lead to the top of this enormous Gothic façade that was supposed to be the portal to a cathedral extension. Once at the top, the 360º panorama over the city of Siena and the sumptuous Tuscan countryside beyond, is compelling but the merciless heat of the midday sun drives us back down from our vantage before our allotted time is called. 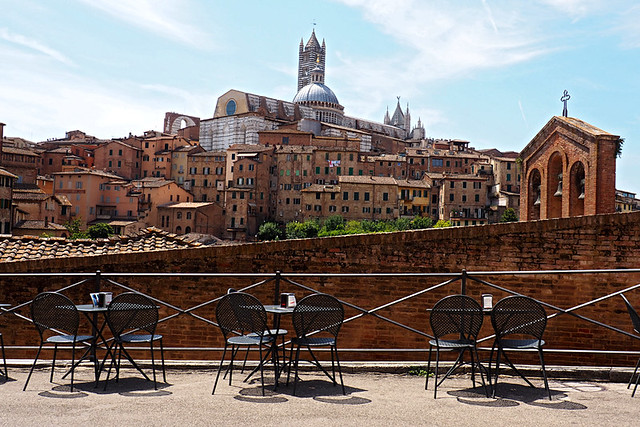 Having notched up several hours of awe-inspiring art and architecture, it’s time to do what Siena does best, wander along alleyways and piazzas, past ancient stone fountains and atop Mediaeval city walls, stopping frequently to enjoy a cappuccino in some small, shady piazza; a gelato sitting on steps alongside the queue of gelato-craving customers; a glass of sparkling Aperol spritz as the afternoon morphs into early evening. Like a creamy asparagus risotto topped with shavings of fresh truffle, Siena is a city to savour; to slowly consume, allowing every morsel to linger on the memory; a city in which to stroll, to sit, to dream, and to be James Bond.