It was the first time I’d ordered it the way the locals pronounce it. Up until that point I had always asked for “chocko freeto”. But recently a waiter confirmed my order by saying the words “shock freet” so quickly they whizzed past my ears before I could fully register them. By the time my ears tuned in they were faint – ghost words on the breeze. But I caught them.

It’s taken a while, but little by little I’m picking up some nuances of dialect. On Tenerife, it took a while to realise the letter S tended to go AWOL at the end of sentences, so ‘dos’ would become ‘daw’,’gracias’ was ‘graciah’, and ‘más o menos’ (a phrase used a lot) came out as ‘mah o menoh’.

Here, south of the Tagus, it can be the last vowel which does the disappearing act; subsequently, choco frito (fried cuttlefish) sounds like shock freet. Considering we’ve eaten masses of the stuff, we’ve been slow on the uptake re how to actually order a dish which is somewhat of an obsession in Setúbal. I recently saw a Portuguese website which stated “Setúbal is much more than choco frito, but choco frito is Setúbal”.

We tried it on our first visit to the town. We ordered it not because we’d done any in-depth research into culinary specialities of the area, but because just about every restaurant we saw advertised choco frito; restaurants with names like the Taverna do Choco Frito and the Rei (king) do Choco Frito. There’s even a Museu (museum) do Choco – a restaurant specialising in different ways to cook choco. Witty statues to the revered choco bookend the town. There’s also a special choco week; ironic as every week seems to be choco week in Setúbal.

The obsession with choco frito is said to have started in the days when cuttlefish had no commercial value. So the fishermen who sailed the waters south of the Tagus, from the Sado Estuary down to Sines, tended to keep chocos for themselves; taking them into Setúbal’s bars where they were fried and served as an accompaniment to post-fishing drinks and lively conversation. It was a tradition which grew and grew until choco frito became synonymous with the town. Now it is in such demand some of it has to be imported from other places.

On our first visit we plumped for O Ramila because it’s located directly behind a harbour where cormorants perch on chunky stanchions, looking like guards keeping a watchful eye on the town’s fishing fleet. Actually we chose O Ramila in an ‘eeny, meeny, miny, moe’ way as there are an awful lot of fish and seafood restaurants at the harbour (and around the town in general). The interior was cavernous, like a food hall, which made us initially uncertain. Since then we’ve realised ‘big equals bad’ doesn’t apply here. Size is simply essential to meet demand. Twenty minutes after being seated beside a fish tank whose residents observed us with accusing eyes, the hall, like every other restaurant at the harbour, was rammed with boisterous lunch-goers – a jamboree of choco frito-eating locals.

We’d eaten cuttlefish quite a lot in the Canary Islands, but none were like the specimen placed in front of us at O Ramila. It had the appearance of something which could have come out of a British chippy. It was chunky, succulent, and bursting with flavour (cuttlefish is boiled with bay leaves and garlic, marinated in wine and lemon juice, then coated in savoury, seasoned cornflour before being fried), the crispy batter contributing a satisfying crunch. It was love at first bite. 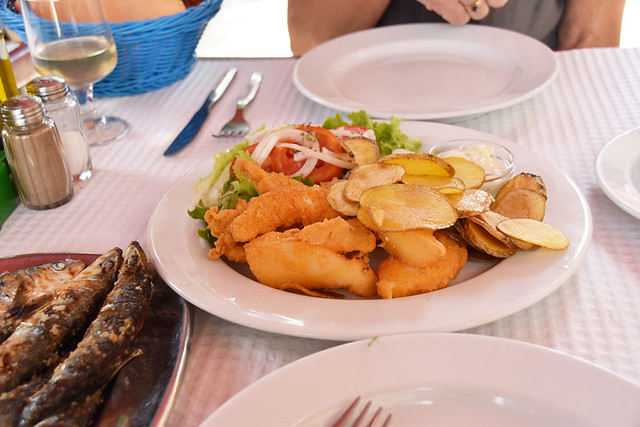 We now find ourselves wanting (needing) regular choco frito hits, and have notched up numerous portions in the town’s restaurants (still only making a small dint in the overall number of restaurants to try which have choco frito on the menu). Favourites include Kefish in Setúbal’s back streets, Galeão in Portinho (huge portions and spicy batter), and Casa do Castelo in Palmela.

With choco frito it can be a bit like the question “where’s the favourite place you’ve visited?” to which my answer is often “the last place.” Our favourite choco frito restaurants tend to be the last ones we’ve eaten at as the quality overall is excellent; although, we have had a couple of slightly rubbery experiences.

Casa do Castelo was the last place we’ve eaten it, and the place where I tried out ‘shock freet’.

It worked so well that when we’d finished and the waitress asked us if we wanted sobremesa (dessert) she changed from carefully phrasing her words to full-on local speak as she recited what sweet wonders were on offer.

I didn’t recognise one single dish. That’ll teach me to try to go local before I’m ready.