The problem with a day that involves hiking, island hopping and lunch in a restaurant with two Michelin stars is clothes. No outfit covers all three – not if you don’t want to look ridiculously out of place at some point.

Which is why we were stripping down to our underwear, as discreetly as possible, in the car park of a fairy tale of a building, the Arabian-esque Hotel and Restaurant Villa Crespi beside Lake Orta.

It’s probably not the conventional way to behave in the car park of a luxury hotel, but stripping off to change into something ‘smart but casual’ seemed preferable to walking beneath the Villa Crespi’s impressive minaret and through its palatial entrance in sweaty walking gear. 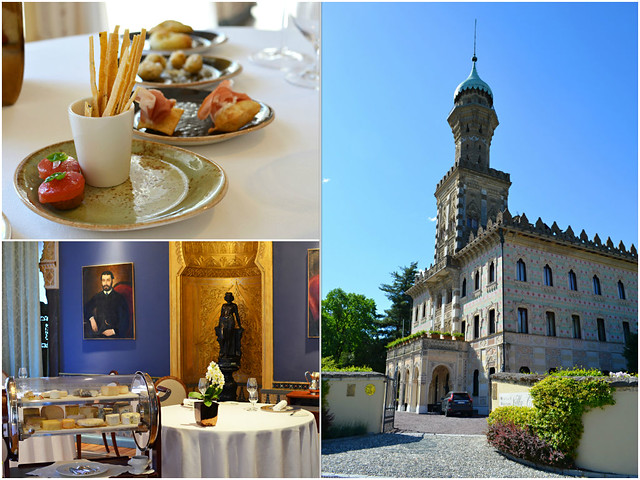 The Hotel and Restaurant Villa Crespi
Villa Crespi is an eye-catcher for sure. The dream of rich cotton merchant Cristofo Benigno Crespi, it was built in 1879 after which aristocracy and rich businessmen were frequent visitors. It’s been a hotel since 1980.

The restaurant is run by Antonino Cannavacciulo, a top Italian chef with a gastronomic imagination as big as his personality; he’s also the star of Cucine Da Incubo, the Italian version of Gordon Ramsay’s Kitchen Nightmares. His philosophy regarding the food in his kitchen at Villa Crespi is to bring a taste of the Mediterranean to Piedmont and marry two culinary cultures, whilst maintaining  local tradition and maybe throwing in a touch of eastern influences.

The Cuisine at Villa Crespi
Inside is as ornate as the 1001 Nights exterior suggests, although the decor is distinctly Italian rather than uptown Baghdad – deep blue walls, baroque furnishings, mellow gold frames and intricate pastel ceiling medallions. A soft jazzy soundtrack dilutes the opulence of the surroundings, making the place feel stylishly cool and accessible rather than an unattainable palace.

Our table is in a narrow conservatory overlooking the gardens. Chairs are positioned so that your view takes in your dining partner as well as the gardens, whilst relegating other diners to a blurred periphery. Although nearly every table is taken, it feels intimate and romantic; the music does its job, masking others’ conversations whilst not imposing on ours. 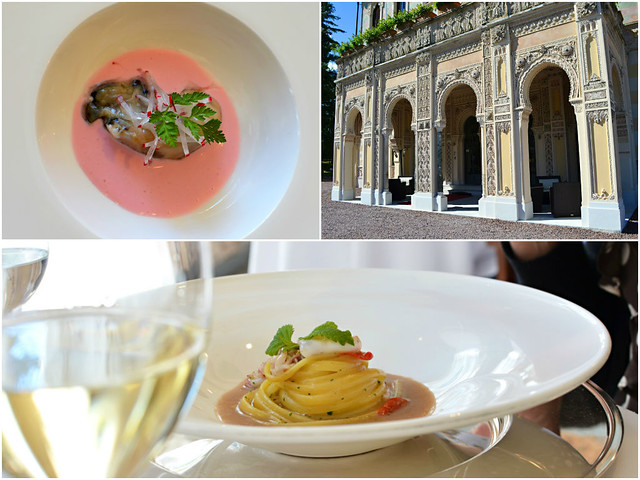 From the second we’re seated it’s a veritable catwalk of chic food, each dish presented with a covering explanation by waiting staff who could have graced a catwalk themselves.

I’m immediately sold the moment the welcome entrées are placed in front of us; a mini meze of treats that include fried gnocchi, dwarf focaccia, grissini, delicate puff pastries stuffed with parmesan and prosciutto and sweet little macaroons. Bite-sized delights in an Aladdin’s cave.

The entrées are followed by a succession of ‘model’ dishes whose range of colours is exceeded only by the sheer number of flavours in each; raw oysters bathe in a shocking bubblegum pink radish sauce; a roasted octopus tower rises out of a more subdued cauliflower cream jazzed up with candied lemon, and Sicilian scampi recline in a blood red, sweet tomato sauce flavoured by octopus water. Each is a surprise for both eyes and tastebuds.

More conventional looking is ‘Tonino’s’ signature dish, Gragnano linguine with baby squid… in a rye bread sauce. I said it was conventional looking, I never said anything about the ingredients. It’s an intriguing flavour; rustic and hearty yet delicate and refined – the Italian gastronomic equivalent of Eliza Doolittle. 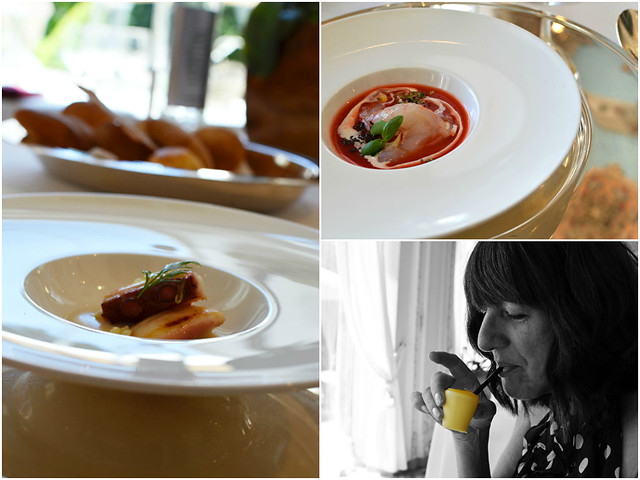 Each dish is sophisticated and adventurous, but there’s also a sense of playful fun; a bit like the Villa Crespi itself. This notion is backed up by the pina colada dessert. This is like no pina colada you’ve ever sipped beneath a fiery sunset – it’s encased in a white chocolate glass. Drink the cocktail, eat the glass. It is inspired. And I don’t even care if drinking and devouring a pina colada means that Rupert Holmes’ song is dragged from the archives of my brain as a result.

It’s really no surprise to discover that a building straight out of the pages of 1001 Nights is filled with treasure.