In her portrait she stands tall and proud against a cobalt sky, head and shoulders above her companions. Her long slim neck rises from strong shoulders and her face is turned away so only the soft lines of her milkmaid’s bonnet are visible.

Jack thinks she looks like Sid from the movie Ice Age.

Mystery surrounds her presence here and imbues her with both a virtuous and a scandalous past. Some say she’s a virgin milkmaid turned to stone to protect her from the Devil, others that she was turned to stone as punishment for cavorting with him, and yet another claims she’s a prostitute turned to stone for killing her child.

Take away the superstition and you’re left with a 15m high obelisk in the shape of a mushroom and one of Germany’s most beautiful Geotopes (a geological phenomena). Formed by different rates of erosion on the rock’s component parts over millennia, Agnes is composed of limestone, dolomite and marl. The neck consists mainly of soft dolomite whereas the head is more compacted limestone and marl which weathers better. Part of the Lattengebirge mountain range on the edge of the Berchtesgadener Land National Park in Bavaria, this is hiker’s Nirvana and the trail to Steinerne Agnes is reputedly a fine one, with the added reward of meeting Agnes herself at the half way stage. 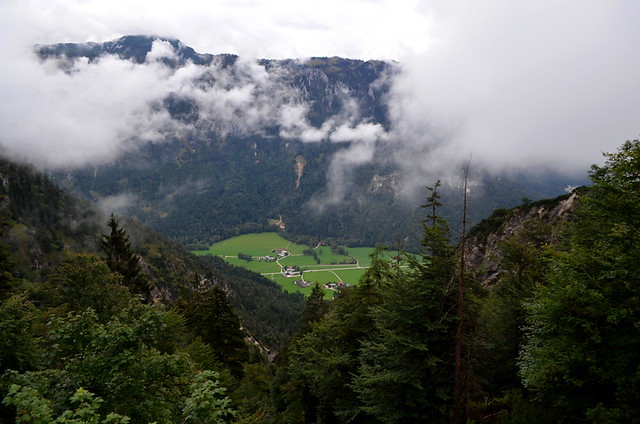 On a rainy summer’s day in September we set out from Bischofswiesen to go and see for ourselves. Beginning from a small car park where Agnes’ portrait with the estimated walking time of 3hrs denotes the start of the route, we set out along the path climbing steeply through forest above the valley floor, occasional breaks in the trees allowing us glances across the spa town of Bad Reichenhall nestling in meadows far below. Onwards and upwards we climb, over tree roots and along narrow paths, our destination countdown marked out in Steinerne Agnes directional signposts every step of the way. At last the path levels out and we follow the final signpost showing just 10mins to our milkmaid. 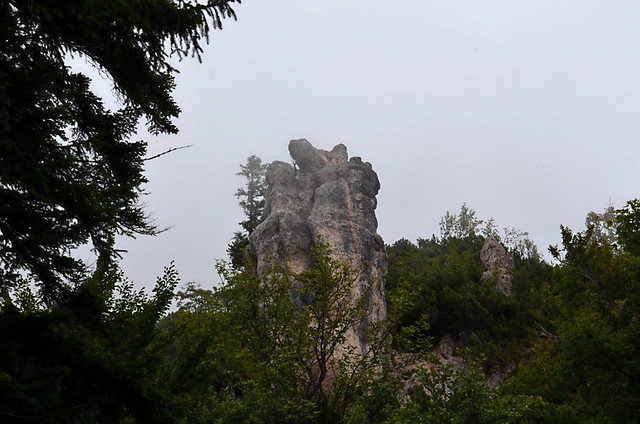 At a clearing below a rock we arrive at another board displaying that tantalising portrait and we look up, expecting to see her proud profile before us. But all there is, is a limestone obelisk, mundanely rectangular with nothing to distinguish it from all the other limestone rocks around us.
“This isn’t it,” declares Jack.
“Yes it is,” I reply.
“It isn’t,” he insists. “It must be further on.”
“This is it.” I know we’re in the right place, I’m just not sure where Agnes is.
We walk around to the front of the obelisk and I realise that what we’re looking at is Agnes from below, her head barely discernible above her shoulders, her neck completely hidden. From down here she looks nothing.

While Jack goes off in search of a profile, any profile, I find a bench, and solace in the form of a packed lunch. 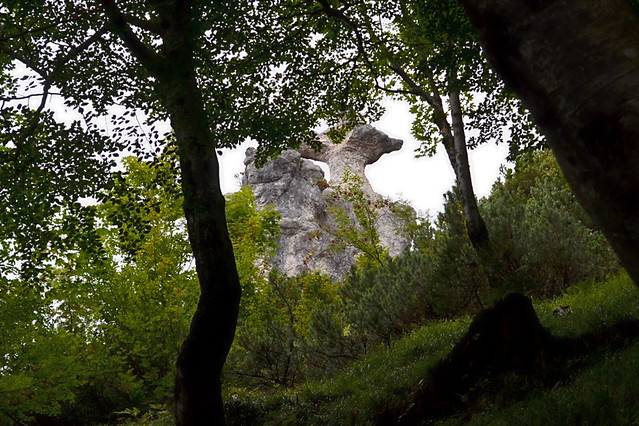 Retracing our steps in order to begin the descent into Bischofswiesen, we round a bend in the path and something catches our eye. Looking back towards Agnes, her profile is suddenly there. Nothing like as clear as her portrait but nevertheless, you can definitely see the slender neck and the oversized head. Crouching beneath the sodden boughs of a tree, Jack manages to take a shot. But without the cobalt sky, it’s hard to differentiate Agnes from the leaden heavens above her.

It’s a good walk and takes in some splendid valley views on its return but I can’t help feeling a bit cheated. Right from the very start you’re led to believe that the portrait in the picture is the one that awaits you at the end of your 3hr forest ascent, and it simply isn’t. After studying the portrait that adorns information boards and leaflets, we’re fairly sure Agnes must have been photographed from a helicopter, a brilliant way to capture her extraordinary profile but surely a bit misleading as an enticement to visit her.

For the rest of our two weeks we were haunted by the notion that we may somehow have failed to find Agnes and that perhaps we should have descended from Karkopf instead, or tried to climb the rocks alongside her to reach higher ground. But we didn’t go back, and she remains enigmatically elusive. I’ve even had to use a photograph from the Bischofswiesen Tourist Board (top) to illustrate what she looks like. If anyone knows a way to see her like this without the aid of a flying machine or crampons, please let us know.

They Always Score, Scenes of Munich

Here’s a Munich tip. If time is short, don’t start an exploration of Munich at the Viktualienmarkt. Within a few minutes of nodding appreciatively at pristine… […]

Despite its history as the city centre’s oldest hotel, a constant buzz of activity gives the place a hip feel which, combined with its contemporary décor, laid back style and brilliant staff, create the perfect city base… […]