Circumstances meant that over the space of two weeks of walking in Germany, we ate a conventional lunch three times. The first was currywurst and French fries at a heavenly hot hütte beside Schluchsee which appeared just as our bodies were in danger of succumbing to bone-numbing sleet.

The second was a lange rote in the Münsterplatz in Freiburg, and the third was in much friendlier temperatures altogether in the wine loving town of Ihringen. At all other times our paths and that of any suitable place to eat didn’t cross until late in the afternoon. In southern European parts that wouldn’t have been a problem as we’d just push dinner back by an hour or two. In rural Germany, where dinner is eaten at what we think of as late afternoon, that’s not really an option. So in the space of a fortnight we became very well acquainted with kaffee und kuchen society. 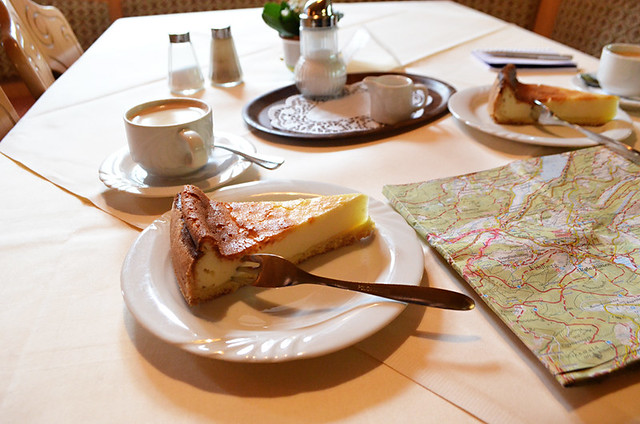 In Ihringen at the southern end of the Kaiserstuhl we had the luxury of being able to pick what we wanted from the menu without fear of being too full to eat dinner. Being faced with an assault of words we didn’t understand we asked the waitress for help. And she introduced us to the culinary revelation that is flammkuchen, a traditional south German dish, which was prepared from scratch in the kitchen of Café Rebstock. 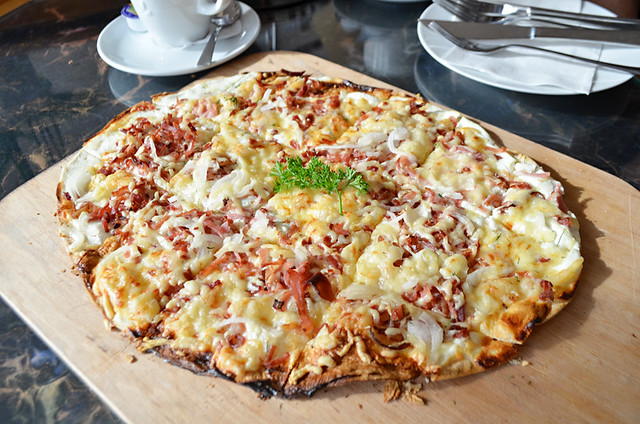 Admittedly, flammkuchen looks like a pizza, but there are important differences; the base is thin and crispy but the sauce topping isn’t tomato based, it’s a creamy blend of crème fraiche, Greek yoghurt, salt, pepper and nutmeg. The topping is wonderfully smoky; fried bacon and slices of onion fried in the bacon fat sprinkled with oregano.

Boy, was it good. We probably made far too many embarrassing noises as we devoured it. 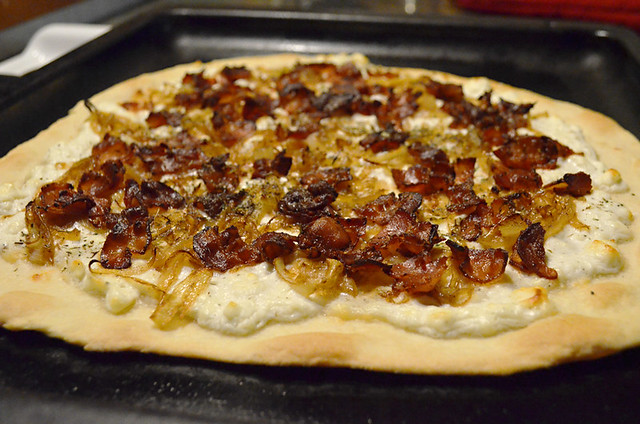 It made such an impression that on our return home to almost bare kitchen cupboards after a month of travelling, the first thing we prepared for dinner was a cobbled together flammkuchen. It was quick and easy to make and consisted (mostly) of the sort of ingredients that are always present in our kitchen, even after a month away. Our sauce was a blend of Greek yoghurt and feta cheese (all we had). For a first attempt it worked exceedingly well. In fact it was bloody marvellous.

Sorry pizza, but you’re passé in our house. Flammkuchen is the new crispy kid on our culinary block.