I’m shocked when Jonás hands us each a hard hat as we we’re about to set off into the Reserve de la Biosfera de los Tilos on La Palma.

I’m not shocked by the sight of the hard hats, our hiking route took us through 13 dark, damp tunnels; hard hats seem a sensible hiking accessory.

No, I’m shocked he didn’t give them to us 35 minutes previously when we were bouncing our heads off the roof of our minibus on a drive up a dirt track with more potholes than flat surface: It was a ride that people in theme parks would have paid a lot of money to experience.

Bruises and bumps aside, it had been a lot of fun and an appropriate intro to a trek that promised adventure, natural beauty, surprises and the infamous tunnel number 12. 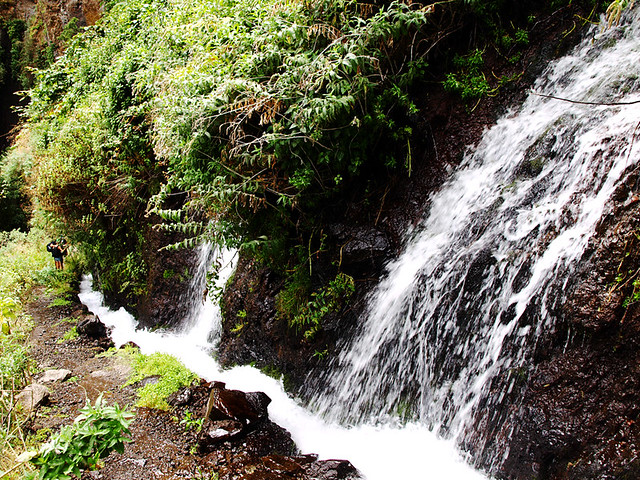 The previous day we’d trekked the hot and steamy Caldera de Taburiente; this route to the Marcos Y Cordero springs was a different animal altogether; an ancient rainforest where tree heathers mixed with fayas, pines, laurels and giant ferns.

Even in hot September, the forest feels refreshing compared to other parts of La Palma. The scenery is dangerously good; the sort that could enchant your eyes to the point you could easily step off the path if you didn’t manage to tear them away from its splendour. Dancing clouds exploring the mountainous slopes beside our route are constant, ghostly companions. 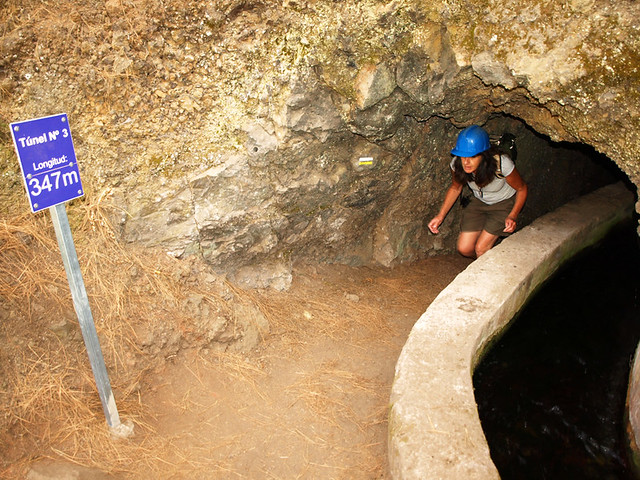 However, epic scenery isn’t the most mouth-watering element of this route; 13 tunnels hewn from the rock centuries ago are what makes this trek something special. 13 narrow, black conduits varying in length, from tens to hundreds of metres, that channel precious water from the Marcos y Cordero springs and shepherd it safely till it reaches the plantations on the coast.

The first tunnel is a short-ish 87 metres. There’s something exciting and primeval about walking through its crude entrance and being embraced by total darkness – turning my torch on helps alleviate the potential for claustrophobia. A few sections later, a glancing blow on the hard hat perched high on my head reminds me that I’ve gained a couple of inches. It takes another couple of bumps before my spatial awareness kicks in and I can judge the low-lying tunnel roof better. The hard hat has already proven its worth, saving me from  a couple of gashes. 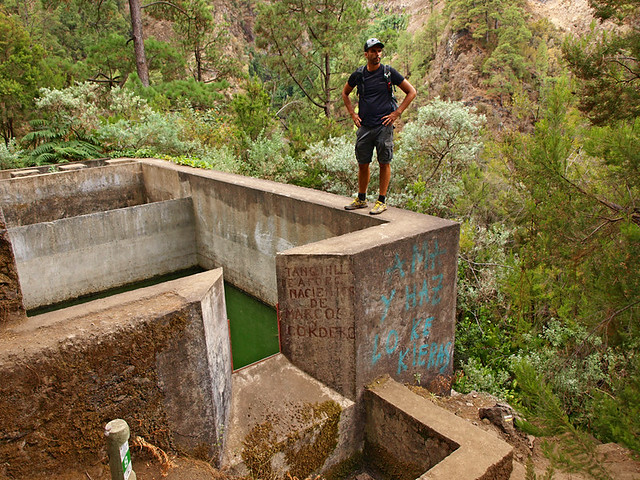 Our path runs parallel with a concrete canal that links the tunnels. Each seems to have a different personality; one is narrow with a high roof – good for the head but less so for the right elbow; another is squat and low, forcing a Neanderthal gait. Yet another is high-roofed but the rushing water is too energetic for the canal and splashes onto the path, creating a double stream that threatens to engulf shoes. Balancing along the narrow concrete lip of the canal itself is the only way to keep feet dry.

But tunnel number 12 is the beast of the bunch, a fact which our guide, the genial, informative and ever watchful Jonás keeps reminding us of, with a mischievous glint in his eyes. 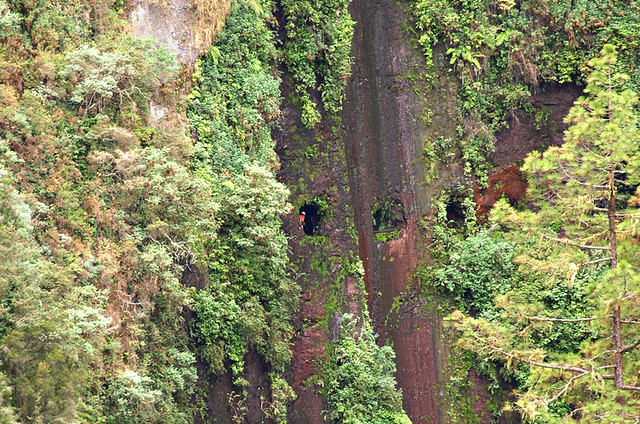 Some of the longer tunnels have holes cut into their sides. From the inside they offer viewpoints over the forest. From the outside they look like tiny openings over an abyss – thankfully we don’t discover this until we’ve innocently stood on the edge of a couple ‘oohing’ and aahing’ at the vistas.

From a practical point of view, these holes provided some light for tunnellers… plus the rubble from digging out the tunnels had to go somewhere.

In one of the longest tunnels without holes, Jonás grabs my arm and tells me to turn off my torch. The result is unnerving. It doesn’t just ‘go dark’; complete blackness swoops in and presses down on my eyes with such force that it feels like a physical presence. It reminds me of how I imagined death may feel like when I was a boy –  like there’s an absence of everything except possibly thought.

“Imagine what it must have been like to actually work in these conditions?” Jonás brings me back to the world of the living. We notch up tunnel after tunnel until finally we’re facing the black, taunting portal to tunnel No12. It sounds lively inside.

“Put your cameras and phones in your rucksacks,” Jonás announces cheerily. “You’re going to get wet.”

I place my camera and phone in my camera bag, turn on my torch and enter tunnel No12.

97 adrenalin-fuelled metres later, I emerge triumphantly; drenched, invigorated and laughing like everyone else in our small group. 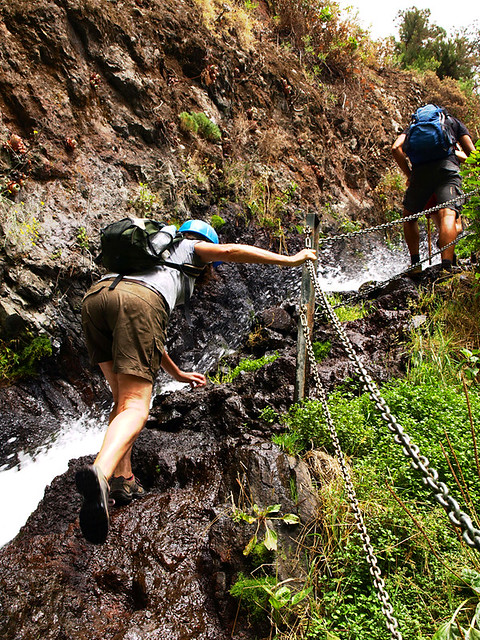 Tunnel 13 is a doddle after No12 and even the steep, spray-soaked steps below the roaring Marcos y Cordero springs seem easy to negotiate.

We rest up at a clearing and fill our water bottles with sweet, spring water that has taken up to two years to make its way through the porous cliff. From this point onwards there are no more tunnels , just a beautiful, atmospheric forest.

To kiss and tell would be to spoil the experience for anyone who hasn’t yet tasted the pleasures of the Marcos y Cordero trail.

I’m afraid you’re going to have to walk the route yourself to discover the secrets of that twelfth tunnel.

Getting there: Thomson fly weekly from Manchester and from London Gatwick to Santa Cruz de La Palma for under £240 return.