Shortly after we moved to the country, we watched a TV programme featuring the most beautiful towns in Portugal. We hadn’t heard of any of them. After four years of travelling around Portugal, creating Slow Travel holidays in the south, east, west, and north, I’ve created a list of my own favourites, only one of which I’d heard of prior to our exploration of a country many people beyond its borders still don’t know very well. 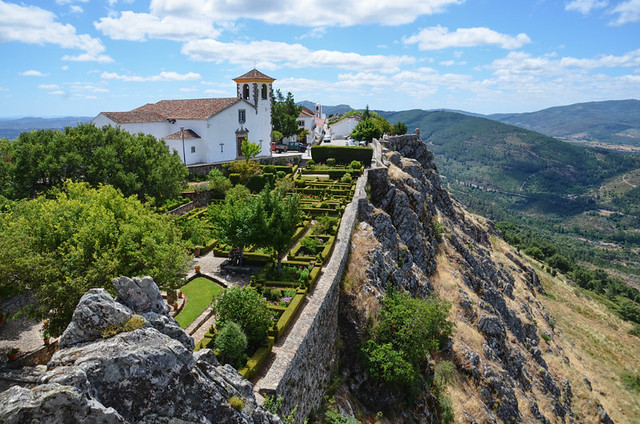 Marvão comes in at first position as it dominated our view for four months. Perched on a rock overlooking the golden Alentejo plains, this walled, Moorish town near the border with Spain is as stunning up close as it is from a distance. You can drive through the (incredibly) narrow old streets to park in the upper town, but it’s far more relaxing to park outside the walls and walk up the winding streets to the castle where the reward for the thigh-stretching stroll is expansive views across the white-washed town to Alentejo plains which seem to go on forever. 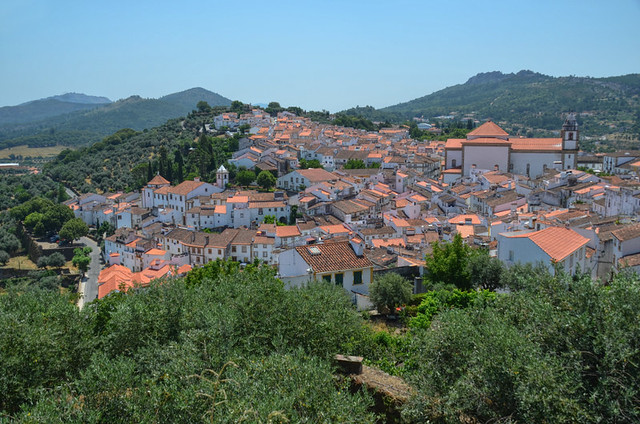 Alentejo boasts more than its fair share of picturesque towns perched on hilltops. Another is Castelo de Vide, a town known for grain milling and wool weaving (its residents were known as cardadores because of this). Thanks to its proximity to the border, Castelo de Vide became a refuge for Jews expelled from Spain during the Inquisition. There are still many reminders of their influence to be seen around the old streets, like the Fonte da Vila in the old Jewish quarter. I enjoyed the best gazpacho I’ve eaten anywhere at restaurant A Confraria, located near the Igreja de S. João in Castelo de Vide. 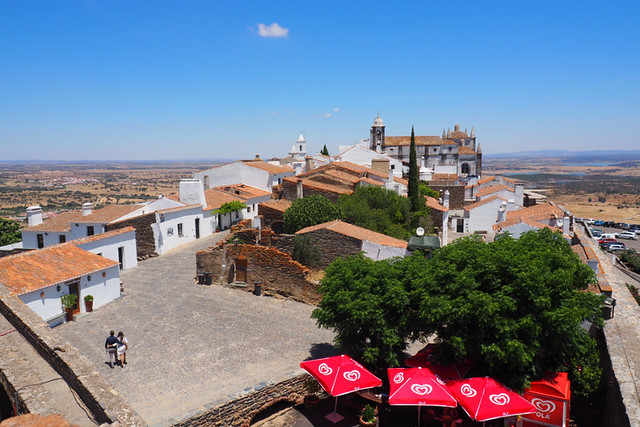 Alentejo again I’m afraid. Reguengos de Monsaraz is another peach of a walled, hilltop town with pretty, whitewashed houses, cobbled streets, and a castle. It has a more bohemian feel than the previous two mentioned, with lots of artisan shops and street art decorating its immaculate lanes. It also attracts more visitors, but that doesn’t distract from its obvious charms. Even on a sweltering June day, it didn’t feel too crowded (see photo). An added attraction is the view from the ramparts of cerulean lakes which add a burst of vibrancy to the green and gold landscape. 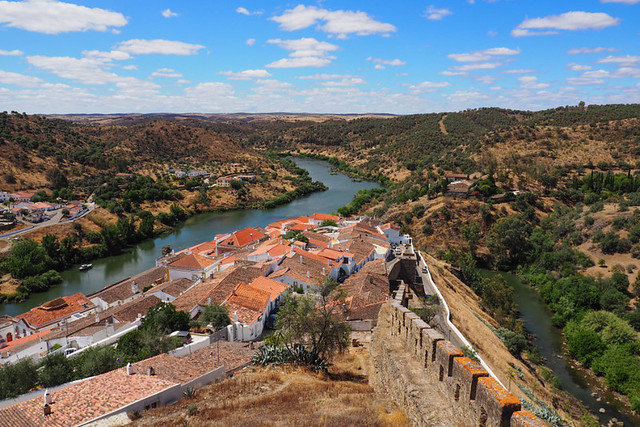 This is the final Alentejo entry, honest. Mértola sits on a rocky outcrop above the confluence of the Guadiana and Oeiras rivers. The old town is reached via an exquisite arched gate which wouldn’t look out of place in Granada’s Alhambra Palace. While the old centre may not be quite as pretty as some other towns on the list, its location sets it apart. Instead of sprawling plains, the terrain undulates more, and the gentle hills are covered with olive and cypress trees. But it’s the river snaking below the ramparts which adds that special touch.

Most beautiful towns in Portugal, central 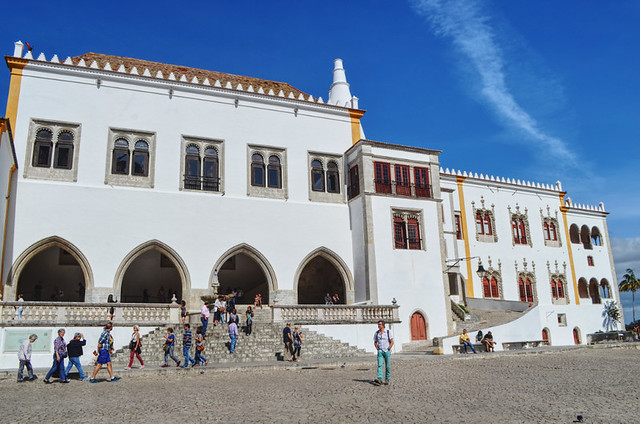 Anyone who knows anything about Portugal will have heard of Sintra. There’s nowhere else quite like it in the country, and it’s easily accessed from Lisbon. It is a tourist magnet and a UNESCO World Heritage Site, and deservedly so. With its colourful flamboyant palaces, it reminds me a bit of Portmeirion in Wales, albeit on a far grander scale. Sintra owes its existence to Ferdinand II who, in 1840, transformed a derelict monastery into a palace with Gothic, Egyptian, Moorish, and Renaissance architectural features which he then surrounded with a vast park. 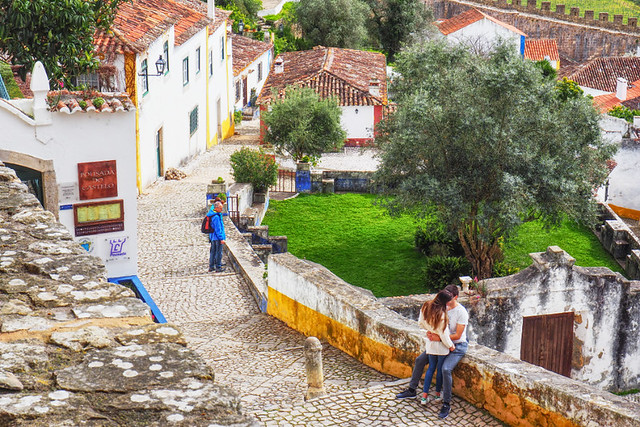 I’m not the biggest fan of the area of central Portugal just north of Lisbon, in the looks department that is. It’s a wee bit too urbanised. But historic Óbidos is another of Portugal’s walled jewels. The old town consists of typical whitewashed town houses whose sharp edges are softened by blue and mustard bands. It’s a good place to try the popular sour cherry liqueur, ginjinha de Óbidos, which is sold from numerous little shops at around €1 a shot. Incidentally, Pasto da Vila does the most delicious pão com chouriço (bread with chorizo embedded into it).

Most beautiful towns in Portugal, north 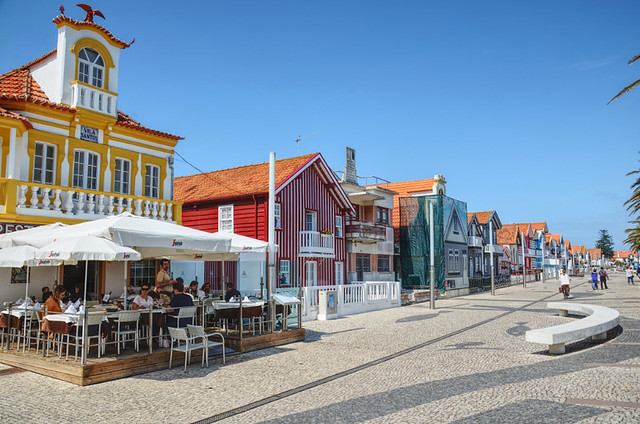 Nearby Aveiro, Portugal’s little Venice, often appears on Portugal’s prettiest towns lists. But I don’t think it’s as appealing as Costa Nova, located on the flimsiest strip of land between the Atlantic and the Aveiro Lagoon. What makes Costa Nova so pretty is its row of unique, brightly striped, clapperboard houses which makes the town feel more like a film set. The houses were originally built as fishermen’s huts but, over time, they increasingly became used as holiday homes. With long, sandy beaches on one side and the calm lagoon on the other, it’s an idyllic place to spend sultry summer months. 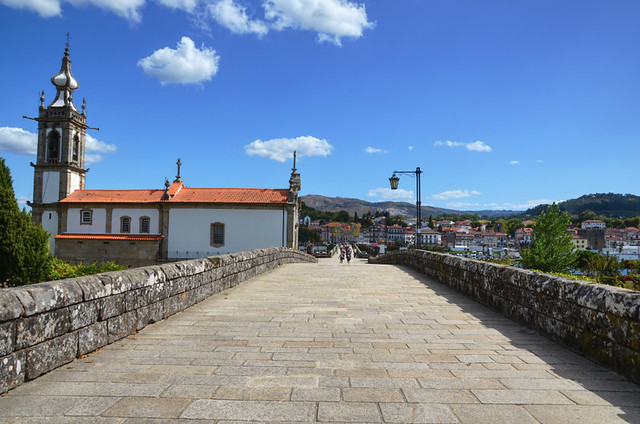 I hummed and hawed between Ponte da Barca and Ponte de Lima for the final spot. In truth, both are worthy of a mention – two historic towns sitting on the banks of the Minho River in northern Portugal. Ponte de Lima edges it because it’s the oldest town in Portugal, there’s more of its historic architecture on view from the opposite side of the river, and the Roman bridge which links the main town with a charming neighbourhood on the northern side of the Minho is prettier than Ponte da Barca’s bridge; it also forms part of the Caminho de Santiago.

The most beautiful towns in Portugal, summary

When it comes to writing lists of ‘the most beautiful places in…” they are always going to be subjective. Other people might include Tavira, Monsanto, or Tomar, a place which Portuguese friends rated highly but which didn’t work its charm on us. There’s only one town on my list which matches the seven we saw chosen on Portuguese TV back in 2017; although, I’d still argue the ones above are more picturesque. The point is, Portugal has a wealth of beautiful towns to discover.

Jack Montgomery is author of the travelogue Camel Spit & Cork Trees: A Year of Slow Travel Through Portugal.

Why eat out in a restaurant?

There can be inverse snobbery at play when it comes to Michelin star cuisine. It’s often described and dismissed as fancy or pretentious by people who prefer their food to be conventional. […]