The first time we were faced with a menu in Austria we realised exactly what the problem with Austrian food was going to be.

The problem was us.

We thought we had come prepared. In our ‘getting to know the local food’ armoury was a mini guide to what to look out for – käsecremesuppe, käsnudeln, tafelspitz, hirschragout, bauernschöpsernes and so on with brief explanations of what each were.

We were looking forward to trying these dishes, even if not to saying them.

Then we were handed a menu and the klaxons went off big time. 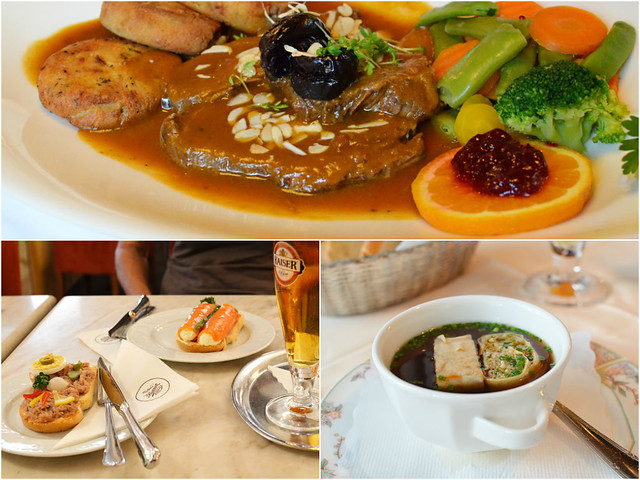 Words like ofenerdäpfel, kräuterrahm, röstkartofflen and faschiertelaibchen punched us relentlessly in the eyes. Desperately, and in vain, we tried to match our words with those on the menu. It was a bit like a culinary version of Happy Families where we were totally unable to pair any of the family members.

The trouble with Austrian food was that half the time we hadn’t a clue what was on offer, mainly thanks to a pathetic grasp of the language that stretched to danke schön, bitte, strasse, der spinne and a few other words remembered from briefly studying German at school, Commando comics, and Andy taking German lessons for work. Clearly neither one of us had studied the lingo long enough to get to the food part. 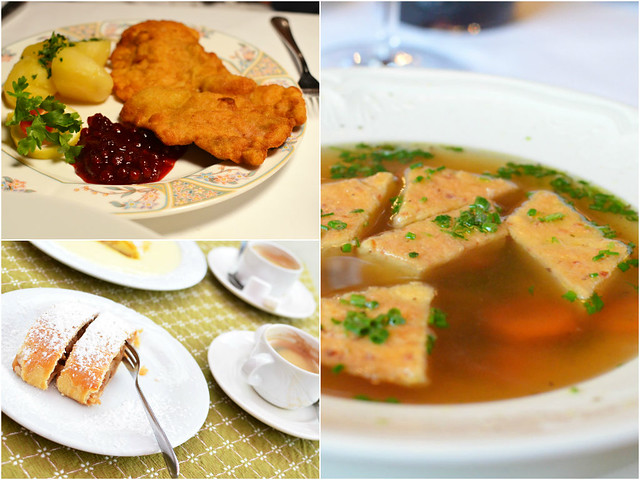 During much of our stay dinner was provided in the rural hotels we stayed at. These consisted of three generous courses that began with colourful salads (e.g. avocado and strawberries in a honey and mustard dressing), cured meats (venison or speck) and clear soups with dumpling islands.

Main courses were mostly meat, occasionally fish, in rich savoury sauces or on a forest fruit coulis and served with sautéed vegetables and rice or potatoes in a variety of guises – boiled, fried, creamed, as dumplings or even hash brown type croquettes.

Desserts were more often than not sponge cakes and tarts, both with an obligatory dollop of cream. 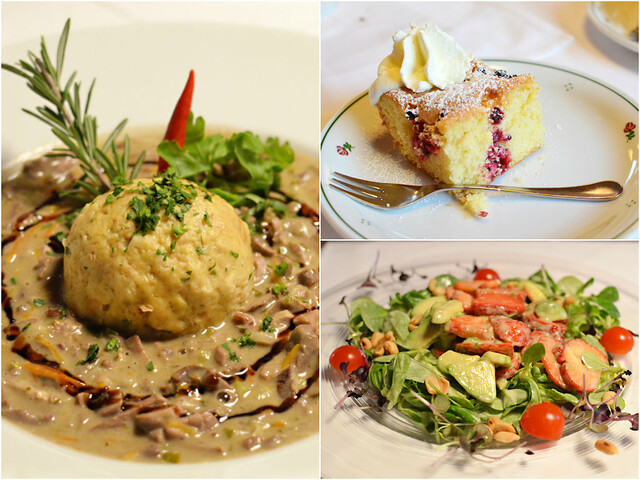 Although the pattern remained the same each evening, the range of dishes was wonderfully diverse; keeping our tastebuds curious and perky throughout. For every beef or pork dish, there might be something a little different like battered chicken livers or medallions of hare.

The only downside to the diversity in the hotels was that as menus were supplied in English we still were unable to identify what the Austrian name for them was, although Weiner schnitzel, tafelspitz, bratwürst and speck were easily recognised.

Lunching out was a different kettle of fisch. That’s when we were mostly exposed to the menus we couldn’t decipher and attempts to grab a sandwich type snack generally ended up with us being presented with belegte brote – open topped sandwiches. It made for an enjoyably unpredictable way of lunching.

In places like St Wolfgang, where there were more foreign tourists, menus came with an English translation so I was able to spot that gröstl (a bacon, egg and potato fry up served in the frying pan) was the perfect brunch dish for someone who grew up in the West of Scotland. 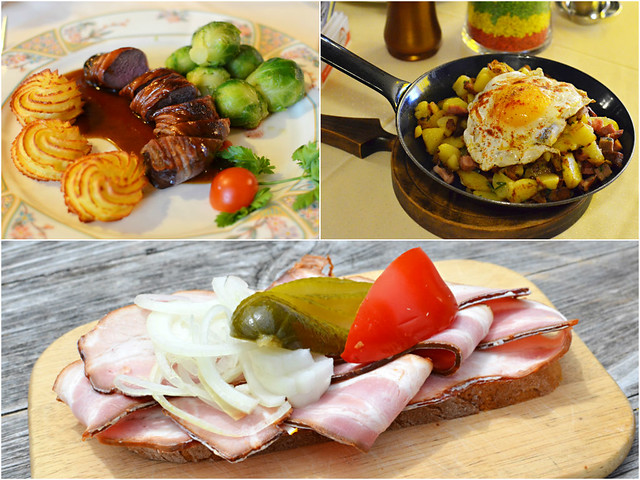 The afternoon kaffee und kuchen was never a problem and many a strudel was confidently ordered and happily consumed after a long walk in the Austrian hills.

In truth it was a bit of a wake up call for us. It’s a long time since we’ve been faced with menus we struggled to understand. Thailand was the last I can remember, when we thumbed our way through a menu where nothing sounded familiar. On that occasion we ended up with ant salad followed by snake-head fish. The ant salad was unsubstantial, the fish delicious.

A similar outcome was unlikely in Austria, but nevertheless it was frustrating not to be able to understand menus. It made us realise we had been a bit complacent with our preparation.

Next time we’ll be much better prepared and will be able to tell our käsnudeln from our käsnöpfle.

Ultimately though, we thoroughly enjoyed our first foray into the world of Austrian gastronomy. The problem with Austrian food wasn’t really that much of a problem at all.