Somewhere between the White Mountains and the blue of the Cretan Sea resides an enchantress, so claims the official tourism website in rather evocative fashion. We wouldn’t disagree, which is why we’re sharing our pick of six of the best of Chania. 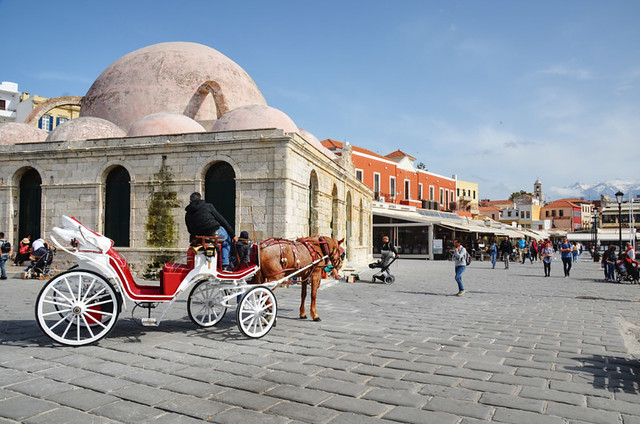 Although a coastal town in north west Crete, there is a distinctly Italian flair to some of the pastel-coloured townhouses which back its picturesque harbour. This is thanks to the influence of the Venetians who gave the seafront its distinctive character when they ruled Chania between 1204 and 1645, one of many nationalities who stamped their influenced on the town over the centuries. At various times, Chania has been under the domain of Romans, Byzantines, Turks, Egyptians, Arabs and, more recently during the Second World War, the Germans.
This potpourri of different nationalities has resulted in a community which is cosmopolitan in its attitude to visitors. This is a town which is no stranger to strangers.

Behind the harbour lies a labyrinth of narrow streets connecting the Jewish quarter with the Turkish quarter. Alleys here are filled with tavernas, markets, stalls selling leather goods, and various artisanal outlets. It’s a town where you feel as if you’re in the east in one backstreet, then back in the west in the next.

Six of the Best of Chania

The main attraction – the harbour 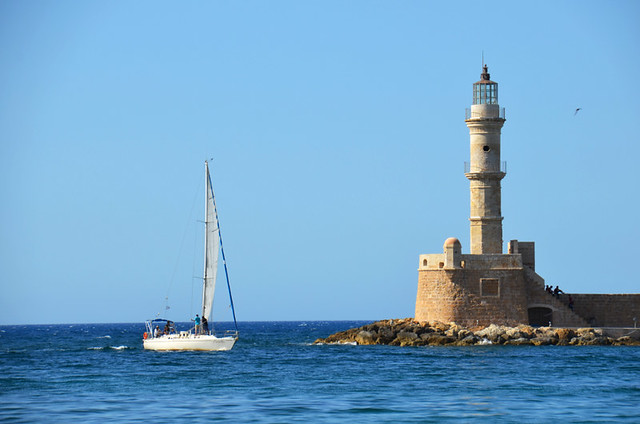 Apart from being a wonderful place to promenade, with plenty of bars, cafes, and restaurants, the harbour’s crowning glory is the Egyptian Lighthouse standing guard at its entrance. Originally built by the Venetians in the 16th century, a chain once connected the lighthouse with the Firka Fortress on the other side of the harbour. This could be raised when the town was under attack, preventing access. Runner-up stand-out sight on the harbour is the pink dome of Giali Tzamisi – the mosque by the sea, where horse and carriage rides through the old town begin. 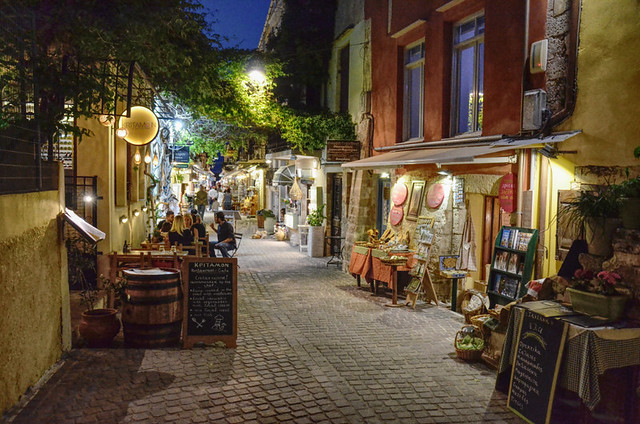 The harbour may represent Chania’s attractive façade, but the backstreets are where you’ll find most evidence of Chania’s multicultural past. South east from the harbour is the Splanzia district, the Turkish quarter which, with its mix of tavernas and cafes, churches and minarets, is considered one of the prettiest areas of the town. Head west, passing the Municipal Market and the leather stalls of Stivanadika (Leather Street – where there are still some good buys to be had; I picked up a great wallet here) to Topanas, the Jewish quarter with its museums and galleries, picturesque townhouses, synagogue, churches, and boutique shops.

The serene scene – the sea wall 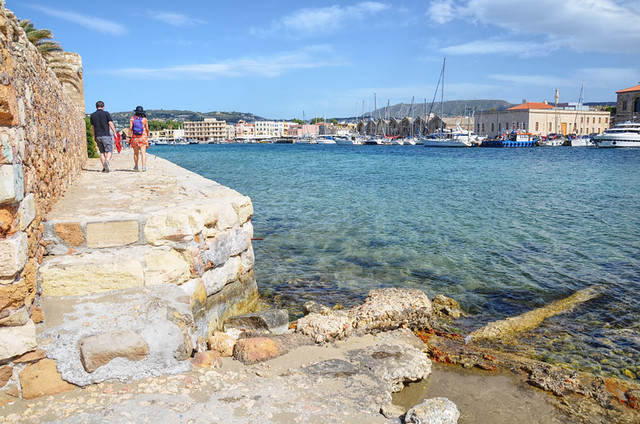 Chania’s harbour doesn’t look particularly big, yet a harbourside stroll from the Firkas Fortress to the Egyptian Lighthouse via the former port comes in not far short of two kilometres. It’s a distance which deters many. When you take a pew beneath the old sea wall, you shouldn’t be sharing the panorama with hordes of people. And what a view. This is where you appreciate the ‘between the White Mountains and the blue of the Cretan Sea’ quote. We sat there in the sunshine contemplating the dramatic mountain backdrop, pondering whether their white peaks was what earned them their name or whether they were just snowclad. 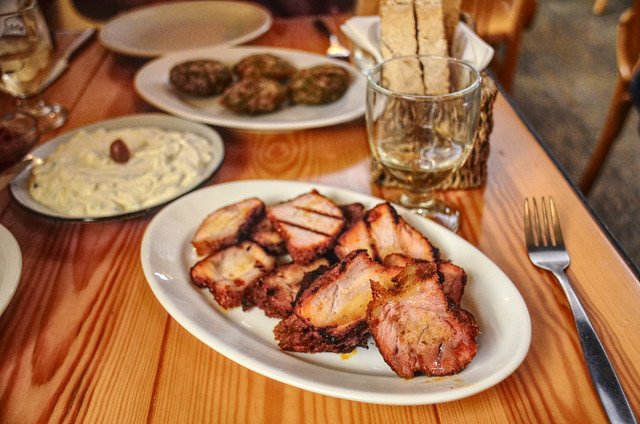 The Greeks do harbourside dining exceedingly well. There’s something about the whole package that is irresistible. Chania has plenty of seafront restaurants in which to enjoy Greek mezes involving Cretan specialities such as fennel pancakes (marathopita) and courgette fritters (kolokithokeftedes). But some of the best restaurants are found in those bewildering backstreets. Tamam in the Jewish quarter was once Turkish steam baths. It’s now a hugely popular restaurant with locals thanks to a menu showcasing the best of traditional Cretan cuisine. Our recommendation is apakia, pork that’s marinated in wine vinegar before being smoked and flavoured with spices and wild herbs. It is sensational.

A toast to Chania 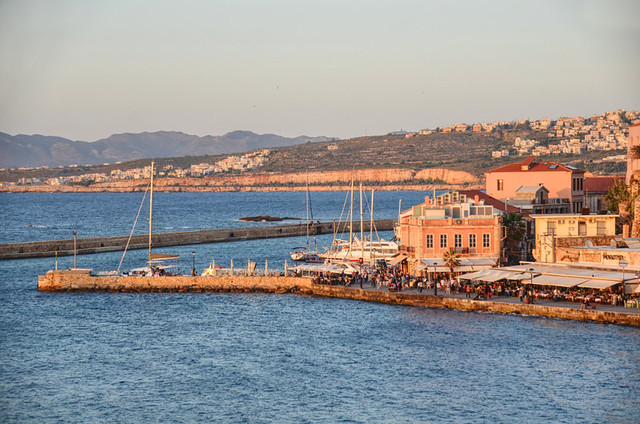 Generally speaking, tourists prefer the western side of the harbour, locals the eastern curve. Which is where you’ll find Barbarossa, a lovely Venetian townhouse with super views. It’s hugely popular at sunset and weekends when the party goes on all night (take note if staying on seafront accommodation). If its bustling scene doesn’t suit, Boheme’s courtyard, a couple of streets back from the seafront, is a quirkier alternative. Past lives include being part of a monastery and a stint as a soft drinks factory. The courtyard has a 400-year-old yew tree, while decorative elements include a roof made from slats from the WWII German railway. 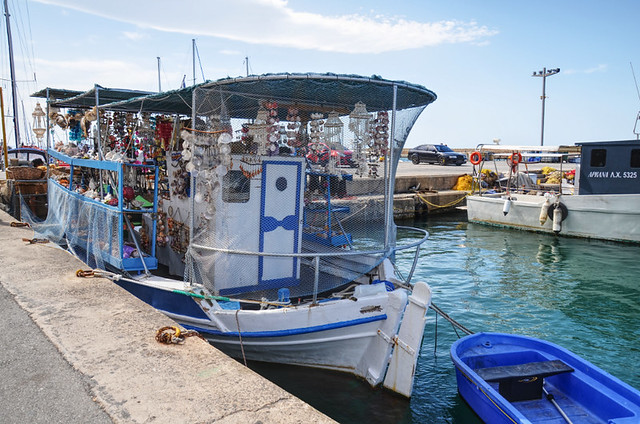 Admittedly they border on the cheesy and are most definitely aimed at a tourist market, but there’s still something charming about the floating shops in the Kasteli area, where the Venetian shipyards were once located. Opposite the distinctive seven A-frame roofs of the Neoria buildings, designed for ship repairs, are typically Greek blue fishing boats converted into floating stalls selling sponges, conch, and wind chimes made from shells. 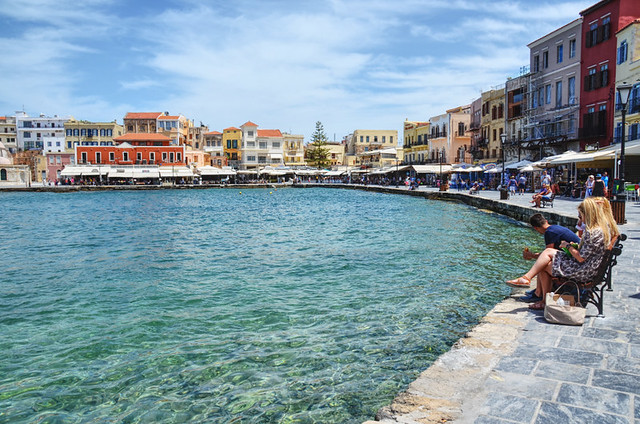 Chania is one of those destinations which doesn’t really have any WOW standout aspects. There’s nothing particularly outstanding to draw hordes of day-trippers. It’s a place that just looks and feels nice to wander around. And that might be one of the factors that make it such a pleasant town to stay in, especially for people who enjoy an interesting and aesthetically pleasing mix of history and architecture, atmospheric alleys, good restaurants, and a nice equilibrium between locals and tourists.