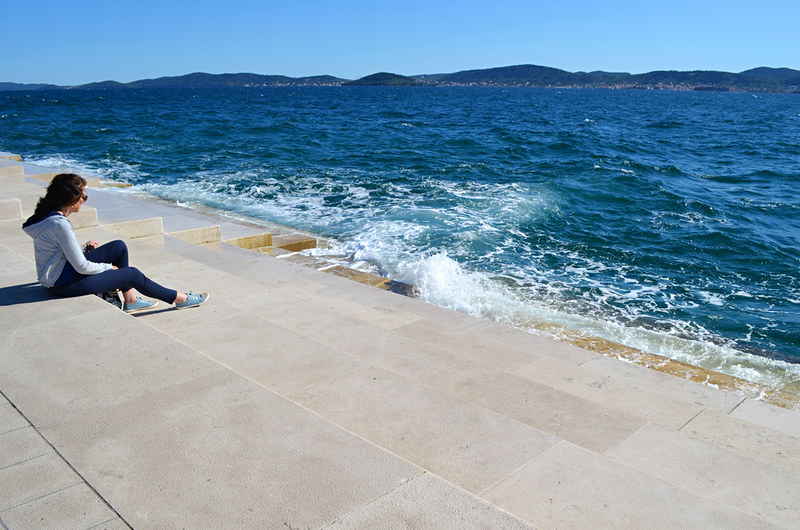 No haunting moans conjuring visions of unseen whales singing in the depths. No abstract music created by an unwitting sea.
There are sounds; the laughter of children, the drone of a ferry, and the jaunty slap of waves against the cool marble steps. The Adriatic is doing its bit, the water rushes in and out of the pipes in the steps, but the Sea Organ in Zadar remains silent.
With a mix of sun and sea spray on our faces, it’s a pleasingly romantic spot to recline with or without an unusual soundtrack. But I’d be lying if I didn’t admit the Sea Organ’s refusal to utter one note is disappointing.
I blow into the neck of a bottle of beer to compensate. A woman on the promenade pauses and listens – possibly fooled. We all want to believe we can hear something.

Eventually we give up straining our ears and stroll away, debating whether the waves were the right type, whether the sea was too low, or even if others had exaggerated the sea organ’s ability to produce hypnotic compositions.

Weeks later we learn it was clogged by shells.

Walking in Mljet doesn’t seem to require much effort. Walk out of the hotel and into the forest where easy tracks lined by flowers weave through Aleppo pine… […]