The path had asked more from us than I’d expected. It wasn’t long, 12km or so, but it was an undulatory landscape. Four valleys enclosed by four ridges, each higher than the last; like increasingly tougher end of level bosses in a video game. An unseasonably hot mid April sun combined with limited shade opportunities added a few extra kilometres to the route… mentally. Walking on Andros had been like that; actual distances stretched by the ruffled terrain. 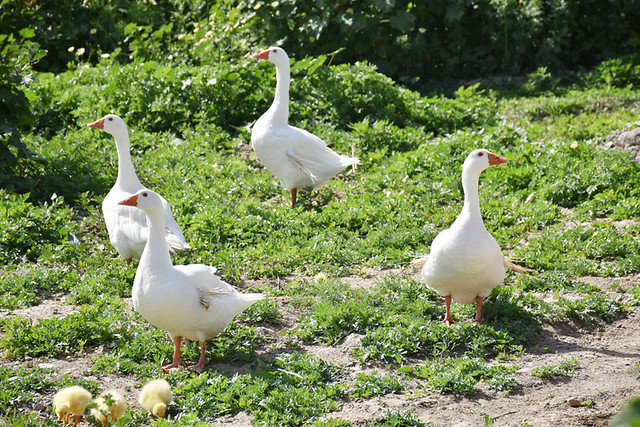 An easy, early morning stroll beside the beach below Chora took us past a brace of proud swans and a family of geese which stood, alert, like the points of the compass, on the lookout for danger as their goslings foraged among wild flowers.

Although ridge one was barely 100m above sea level, it was enough for beads of sweat to gather on foreheads to share the view. Only 100m, yet of sufficient altitude to elevate the view of the town with its unusual ostracised rock lighthouse and broken fort to, maybe rather obviously, a different level. 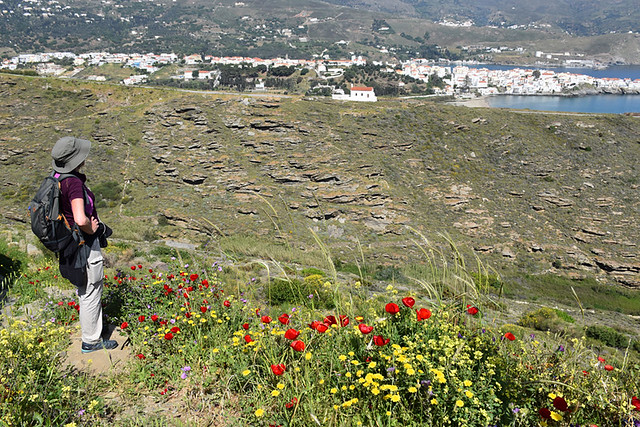 Reaching ridge two at 200m turned the sweaty beads into an unruly crowd, running riotously down my face. The reward was even better views of town and a concealed cove, framed by a posse of spring blooms at their striking best. 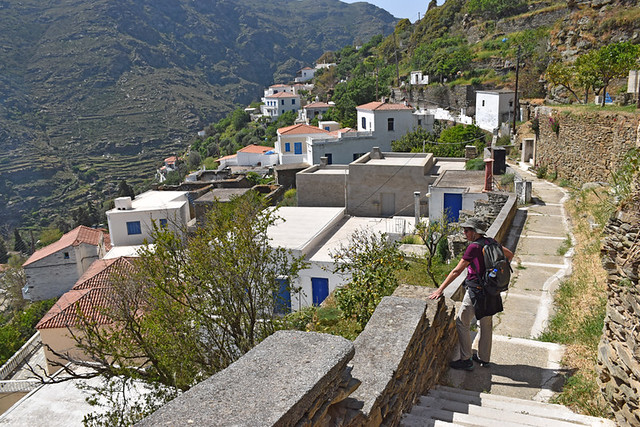 At this point, the lowly valleys decided ridges had hogged the show enough and noisily muscled in on attempts to seduce our senses as tiny, hotchpotch Sinetti exploded into view. The cluster of pretty houses tucked into the slope on one side of the valley should have been the archetypal tranquil Greek village. However, one of the villagers had managed to procure the loudest fireworks in the history of pyrotechnics. As we descended, via narrow walkways decorated with simple chalk flowers, to a church bedecked with colourful bunting, ear-drum shattering/heart-stopping booms at unexpected intervals announced our increasingly nervy arrival. 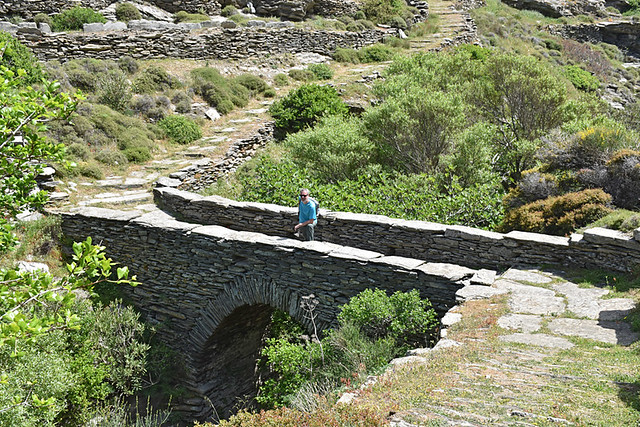 The next valley was a far more tranquil affair, the only sounds being soothing ones from a gently gurgling brook. We’d hoped to lunch in the shade of old water mills, but the sun was high in the sky, making the shadows cast by their ruined walls too mean to use. We huddled under a slightly more generous dark band beside a dry-stone wall, which at least gave respite to hot heads if not legs. Munching our sandwiches, we traced the line of the cobbled path as it curved its way up the hillside to a point at around 500m, below the formidable walls of a natural rock fortress, where our ascending for the day would be over. 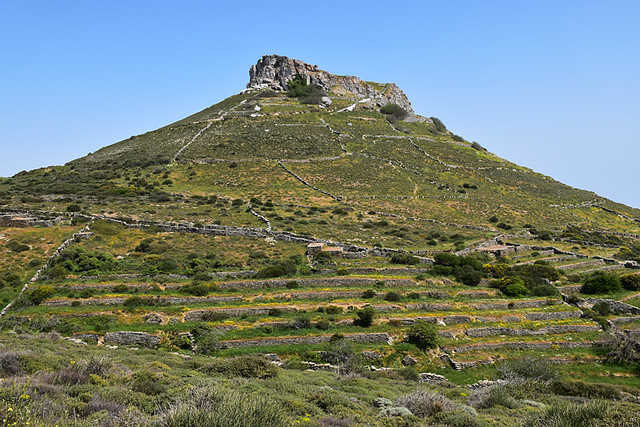 From the rocky fort we dropped on a wide, knee-friendly path through stepped terraces toward the welcoming smile of the crescent bay at Ormos Korthiu.

Mid-afternoon and Ormos Korthiu was a ghost town. The first living thing we saw was a swan which waddled from the shoreline to a shallow hollow in the centre of the sandy main street where it proceeded to have a long, leisurely dirt bath. The two cars which passed had to drive around the indulgent creature. 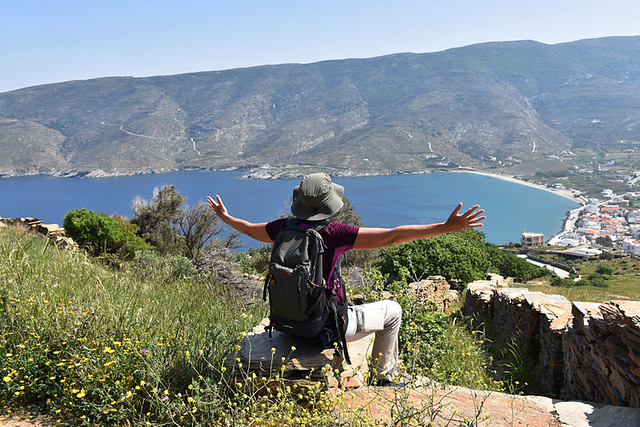 With our remaining water supplies more suitable for dipping a teabag into, we thirstily sought out an open taverna for some liquid that was refreshingly cool. Sanctuary was offered by Allegria, a tapas bar with shaded tables and a blackboard menu whose daily offerings were in Greek save for pizza and something called a ‘bapger’.

Using internationally recognised mime for ‘we urgently need cold beer’, two icy Hellas Fix beers were promptly ordered from a sleepy-eyed owner who had the demeanor of a friendly grandfather.
Sipping cold beer under a hot sun in a Greek taverna overlooking the sea is one of those travel moments which is akin to being able to press a big button with ‘AND RELAX’ printed across it. Both soul and thirst were quenched as time was put briefly on hold. 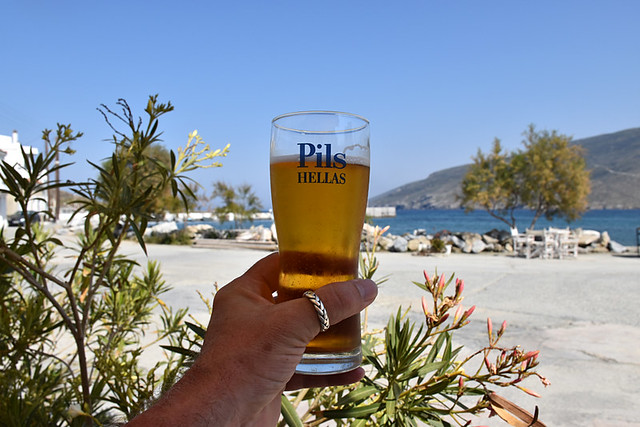 There was still the question of how we were going to get back to Chora from a town which, although of decent size, was doing a passable impression of the Mary Celeste. We decided to extend the feel-good factor by ordering another beer and worry about such logistics later.

I sauntered into the bar for another Fix to find the owner, head in hands at one of the tables, pushing out quiet Zs.

As I watched him snooze, mentally tossing a coin to decide whether my desire for beer was worth waking him for, I also wondered how I was going to describe this place; the term sleepy village being dismissed in travel writing as a cliché.

I opted to wake him. It was a question which required serious consideration. For that sort of pondering a beer was an essential accompaniment.