I had read about the famous maquis of Corsica, the island’s heady perfume that pervades the air and haunts Corsicans who leave the island. In exile on Elba, Napoleon is said to have yearned for the scent of the maquis, the smell of home. But when I got there, I didn’t smell it. 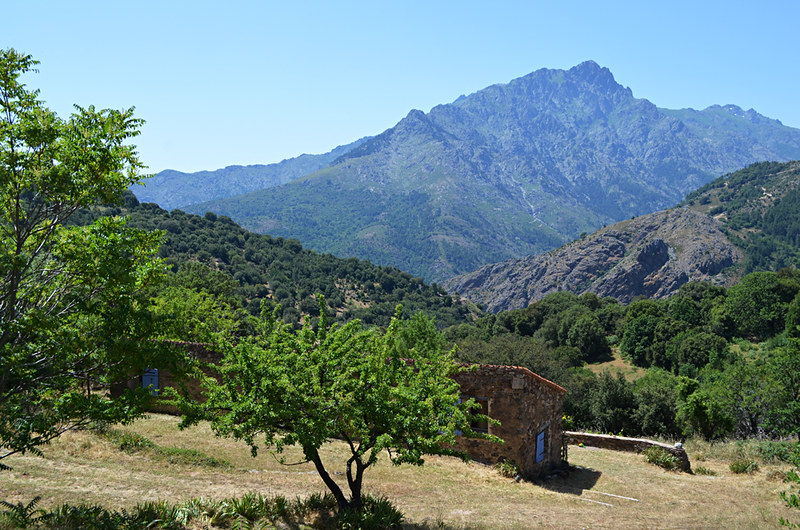 Emanating from the dense, aromatic shrubbery that carpets a fifth of the island’s surface area, the maquis includes such potent perfumes as l’immortelle (or curry plant as it’s better known); cistus, fennel, aster, rosemary, thyme and rue, and has provided food and herbal remedies for the Corsicans for centuries.

Admittedly I forgot about the maquis when I got there, distracted as I was by the drama and allure of the scenery, but I would surely have remembered it if my nostrils had been instantly assailed by it. Maybe it was too hot, or too dry. Maybe I was in the wrong part of the island. Or maybe I just didn’t recognise it for what it was, being stopped in my tracks more than once by its singular components; the sweet smell of figs, the savoury scent of curry plant, the fragrant aroma of fennel. 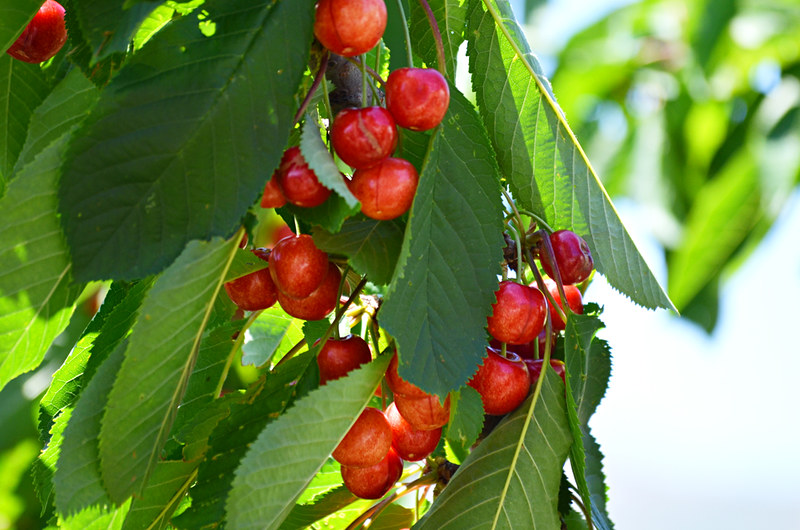 And maybe I was just too distracted by the edible bounty that surrounded me. Plump and shiny cherries hanging in fat clumps, so close to my table I could just reach out and pick them; dusty-coated salami sausages hanging on red strings above the counter of a deli shop; small, open baskets of fresh, organic fruit and vegetables displayed like trays of jewellery. 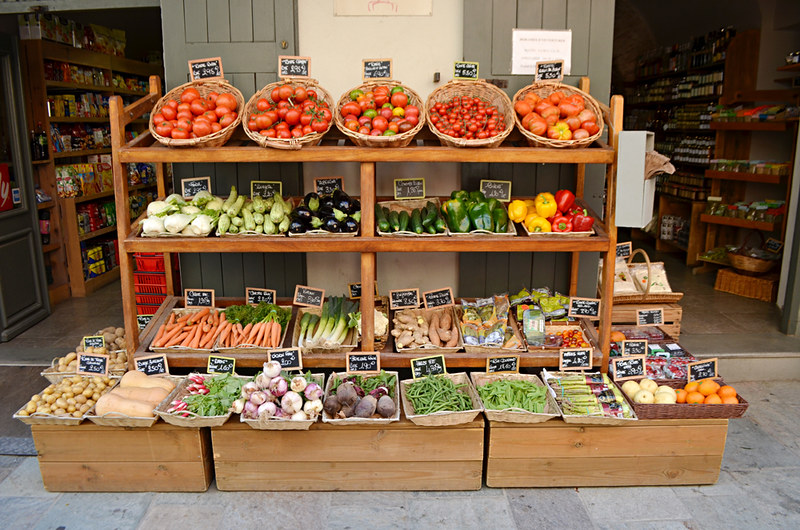 Corsica may well be famous for the scent of the maquis, but if I was Corsican and forced to live in exile, it’s the tastes of the island that I would most yearn for.

Brocciu
A soft cheese made from goat or ewe’s milk whey and boiled milk, Brocciu is Corsica’s national cheese and appears in pasta dishes, tarts and cheesecake (see Fiadone below). But when we were told there was also a Brocciu ice cream, it just had to be tried. One warm evening, after enjoying a sinful burger, we resolved to consign calorie counts to the trash for one night and finish off with this creamy, rich dessert. Sitting on the waterfront, eating Brocciu ice cream, is one of many endearing memories of pretty, Saint Florent. 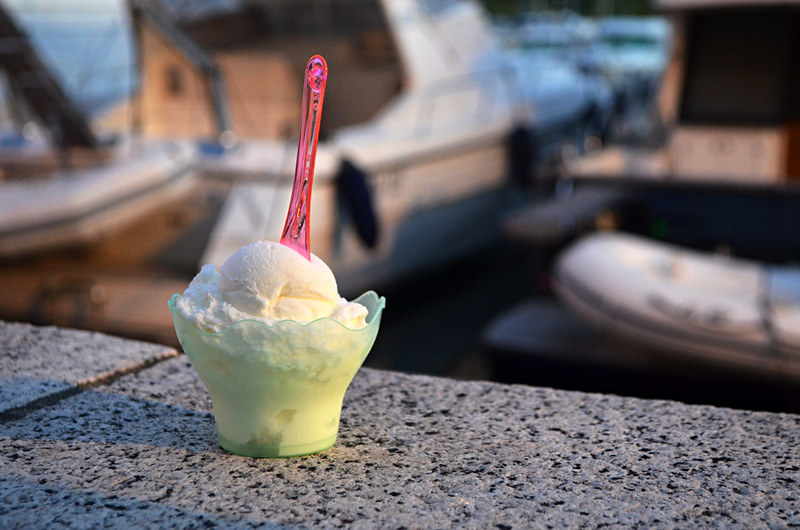 Chestnuts
For almost two centuries of the Genoese occupation of Corsica, farmers were required to plant four trees a year, one each of fig, chestnut, olive and mulberry. That legacy remains today and these four trees are prevalent across the island. Chestnut in particular became indispensable to the Corsicans who used the nuts to grind chestnut flour, assigning it the nickname ‘arbre à pain’, the bread tree. 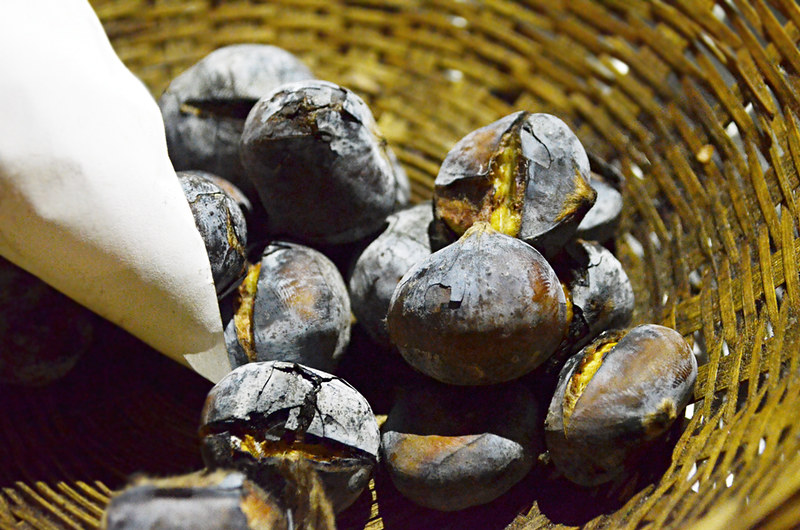 Fiadone
A crustless cheesecake made from Brocciu cheese and chestnut flour, this savoury treat is usually served chilled. Ours was temperate, having been purchased from a small deli in Saint Florent where it sat alongside stacks of pizza, cheese bread and bruschetta, and eaten while sitting on a wall alongside the frog fountain in Place Doria. 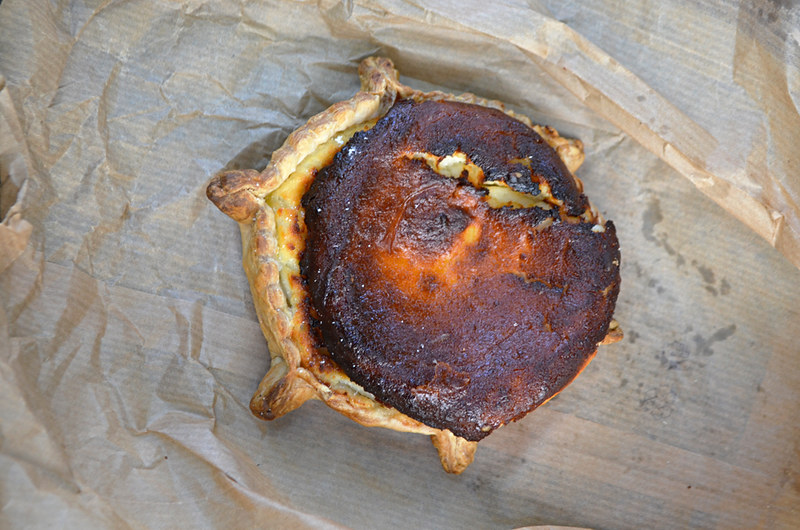 Wild boar
Although it’s known as ‘wild’ boar, in fact Corsican boar are more vaguely annoyed than wild, long having inter-bred with domestic boar. Feeding on chestnuts, the pork of the wild boar has a very gamey flavour and is highly prized. Civet de sanglier, wild boar stew prepared with chestnuts and fennel, is practically the national dish. This one was in a great little restaurant in Calvi. 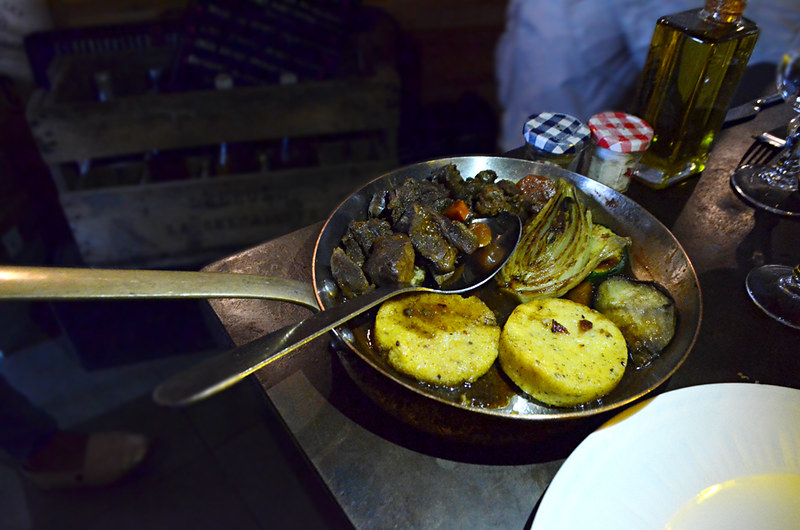 Pietra beer
Made from chestnuts growing in the highest chestnut grove in Europe, every autumn the nuts are carried down the hill on donkeys and sorted by hand to produce organic chestnut flour. Added to the malt, this is what gives Pietra craft beer its colour of autumn in a glass. Smooth and thirst-quenching, this beer became our best friend at the end of hot walks. 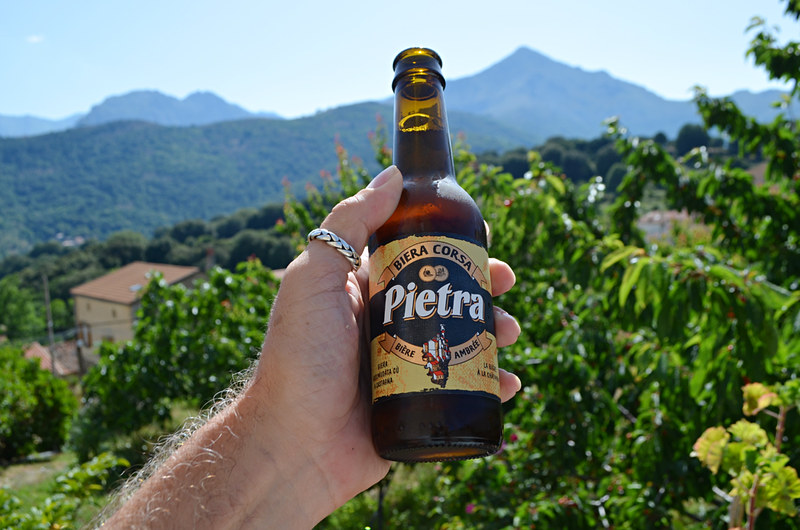 Beignets
Lightly fried, golden doughnuts of chestnut flour wrapped around cheese, often Brocciu, appear on most menus in the north of Corsica and are delicious, if filling. In one restaurant in Sisco we were served six, large cheese beignets as an interim course between starter and main. We had to send most of our main course back untouched. At L’Osteria in Olmi Cappella we were persuaded to try the beignets by two elderly, elegant and erudite ladies. How could we possibly refuse? 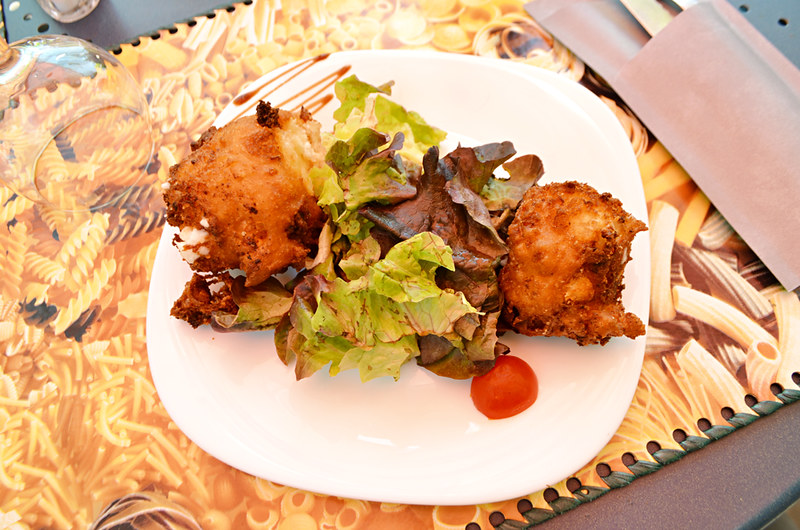 Vin D’Orange
“Vin d’Orange?!” I had to read the label twice. In many, happy years of wine drinking, I have never encountered orange wine yet here it was, standing proud alongside the reds, whites and rosés at Clos Culombu vineyard outside Montegrosso. An aperitif produced from a wine base, macerated with the zest of oranges, it tasted like Cointreau meets Malvasia and I regret not buying a bottle to bring home. 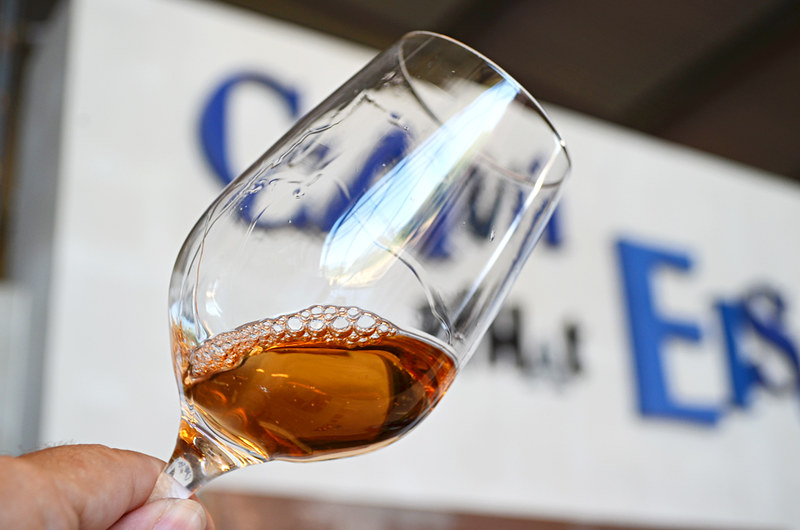 Moules-frites
Wandering the marinas of Saint Florent and Calvi as dusk fell and the lights of restaurants reflected across the water, the evening would resonate with the clatter of chairs pulling up against tables, and conversation and laughter rising from diners while the irresistible scent of moules frites permeated the night air. We succumbed to their delights at a chic little restaurant behind the waterfront in Saint Florent and they tasted every bit as good as they promised. 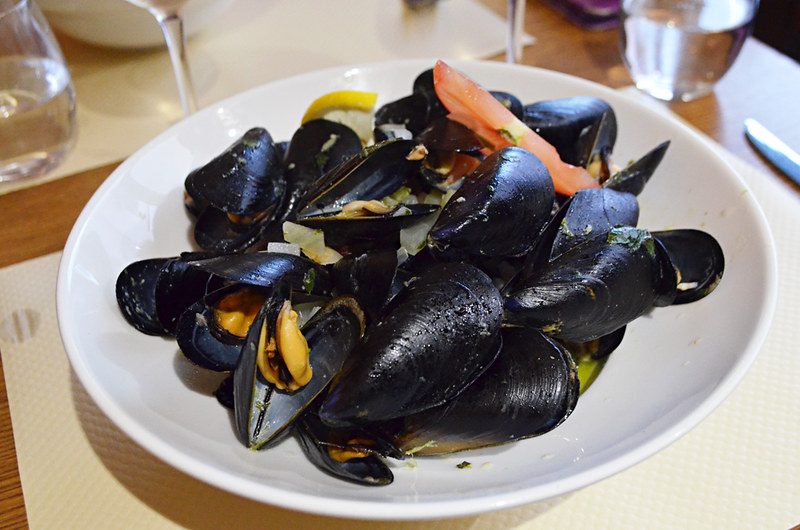 Tiramisu
We had been told the tiramisu on Corsica was very different from the Italian variety and that the hotel we were staying in did a particularly good one but it didn’t appear on either of the two nights we stayed there.
“Did you try the tiramisu?” asked our guide as we drove to our next destination. “I saw it in the breakfast buffet this morning when I came to collect you.”
Tiramisu for breakfast? That’s like cornflakes for dinner. I had assumed it was some kind of milk pudding and gave it a wide berth.
After that, we did get to try the tiramisu in other places and it was good, but if I’m honest, it tasted pretty much like tiramisu. I guess you have to have it for breakfast to really appreciate it. 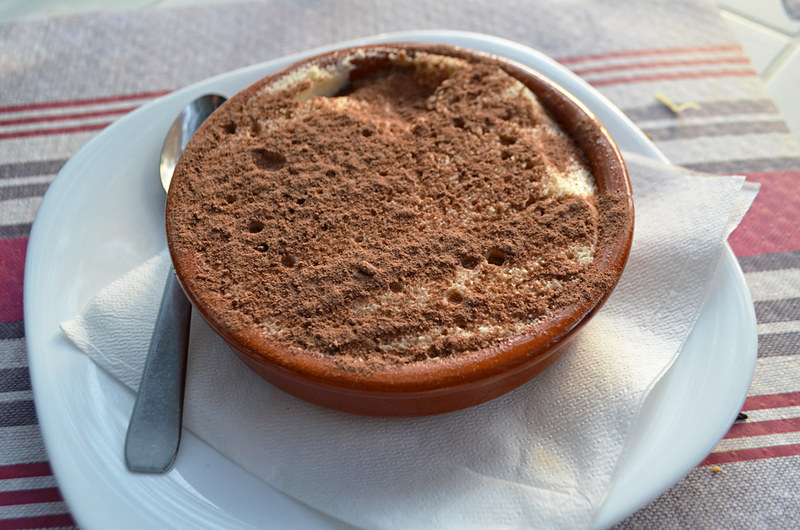 Cap Corse
We ran into the chef in the village. It’s a very small village. “I’ve got some beautiful veal fillets for you tonight,” he said. “Marinated and cooked in a Cap Corse cream sauce.”
We smiled and said we’d look forward to it, even though we’d promised ourselves a pizza reward that day after our walk. But the veal was sensational. And when we’d finished it, the chef insisted we end with a glass of Cap Corse, to aid the digestion. A bitter-sweet vermouth infused with herbs; maquis in a glass. I may not have smelt Corsica’s famous aroma, but it certainly tasted good. 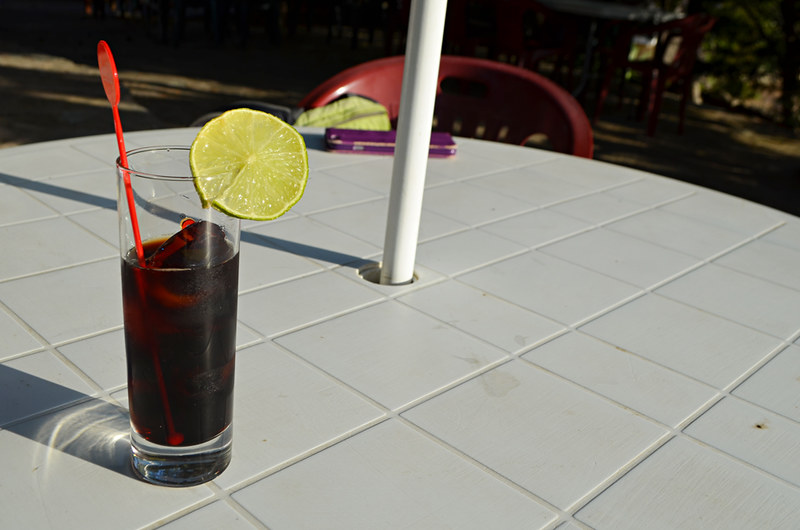 Laos is a relative newcomer on the international holiday destinations scene as it is landlocked and surrounded by mountains, effectively isolated from the wider world. […]