Carcassonne sounded perfect. A medieval town on a hill perched proudly above the River Aude; the serenely beautiful tree-lined Canal Du Midi and the new town of La Bastide Saint Louis that would be a really old town in most people’s books. Two of the three are UNESCO World Heritage Sites (La Bastide is the odd one out). 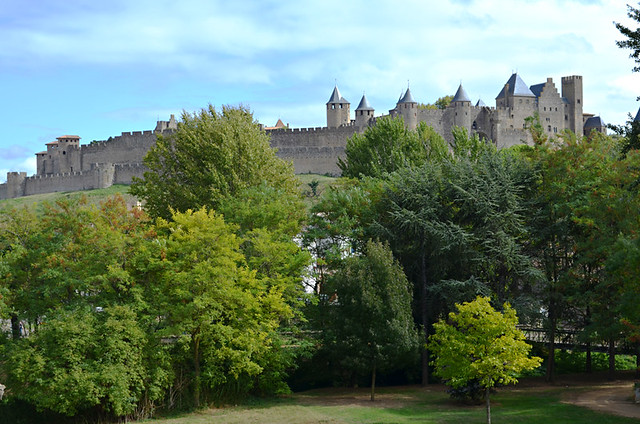 We were all set to book a hotel located within 20 minutes walk of the splendid castle fortress on the mount (all hotels seemed to be 20 minutes walk from the medieval jewel in the crown) when we received advice from a friend whose judgement we totally trust.

The idyllic picture in my head of walking hand in hand through tranquil, ancient avenues evaporated. Taking her sage advice, we opted to stay in Limoux; close enough for a day visit to Carcassonne.

La Bastide de Saint Louis XIII
Not knowing Carcassonne, we parked at the first sign of anything remotely historic. This turned out to be the La Bastide part of Carcassonne, built in 1260, on the opposite side of the town from where the Cité Médiévale was located. Not a problem as it gave us a chance to walk around the ‘new’ part of town first. 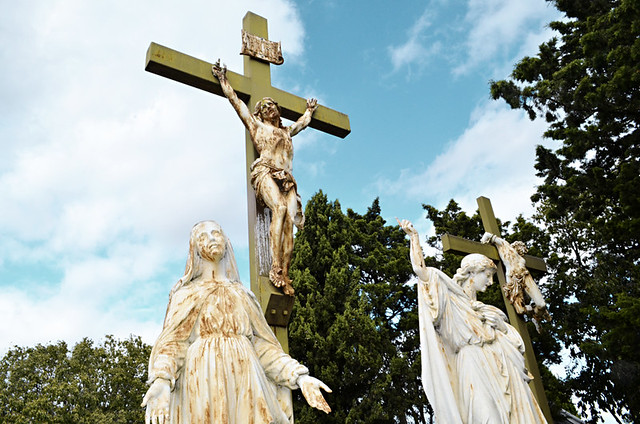 La Bastide has a chequerboard layout which makes it relatively easy to negotiate… once you’ve got a map from the tourist office at the Jardin André Chenier.

We’d parked beside the Jardin du Calvaire – pleasant gardens with cypress trees and an interesting selection of statues connected with the stations of the cross. It was free to enter and free of people.
Similarly, as we traversed the old streets, passing grand churches and historic buildings there was a distinct lack of… well people like us – tourists. In fact it was all rather atmospheric, crowd-free and authentically French. 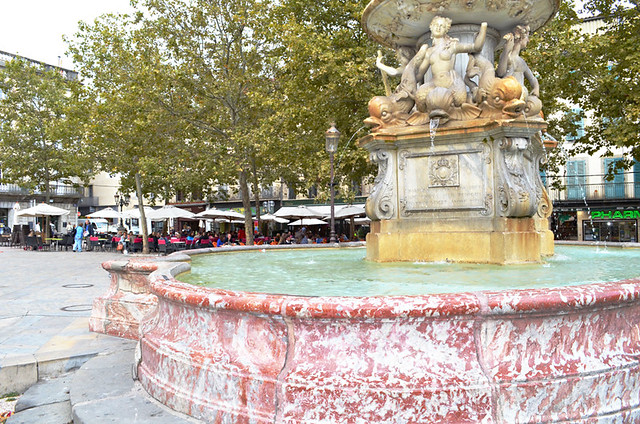 By the time we reached the tourist office at the Jardin André Chenier, the vibe began to change, helped by the girl in the tourist booth who was one of the ‘draw circles on a map = providing information’ types. From there we made our way to Place Carnot (where we had a forgettable lunch) and the Portal des Jacobin (the lone survivor of the four gates in the walls that once surrounded the city) and then doubled back to reach Pont Neuf. Although the number of people around us had swelled, the overwhelming character was still most definitely French.

Even as we crossed a quiet Pont Neuf, pausing to look at lovers’ locks, a giant’s frame and the beautiful old medieval city on the hill, there were only a handful of other visitors around. 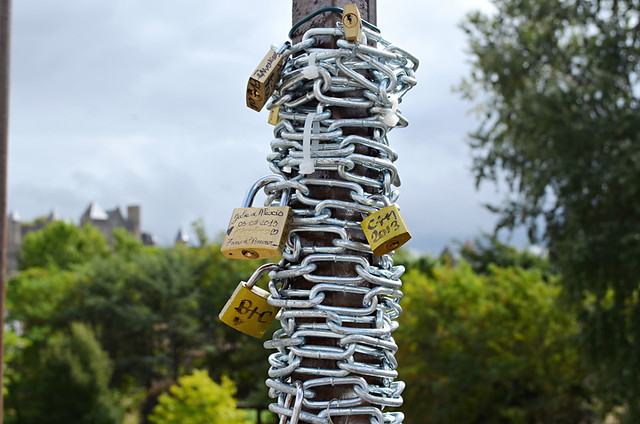 We started to wonder whether our friend had been unfair about Carcassonne.

A charming and quiet street wound up to the old city, passing empty cafés and drainpipes with fish faces. It was romantically serene, We almost felt like holding hands… and then it all changed.

The Medieval City of Carcassonne
Coach after coach spewed its load onto the area right at the entrance to the old city – god forbid anyone should have to walk any farther than the minimum necessary. Suddenly, all Frenchness was gone, replaced by an army of sightseers.
Although Dame Carcas guarding the entrance (see below) continued to smile enigmatically, she must have been thinking ‘here we go again, another siege.’
I’m no hypocrite (not in this instance at least), everybody has as much right to visit a place as I do. I get riled when ‘travellers’ moan about the presence of tourists when that is exactly what they are themselves. But neither do I like it when coaches or cruise liners bring people to a location in their hundreds or, in some cases, thousands. 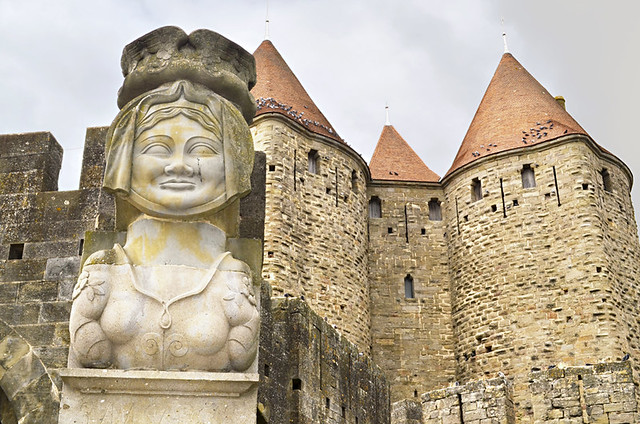 It changes the balance of a place; the weights falling in favour of visitors, with ‘locals’ being relegated to little more than sideshow exhibits. Mont Saint-Michel suffers from the same.

Instead of French, the dominant language around us became American English. Instead of people moving organically, such as the residents of busy towns and cities do on their streets, there was a herd-like movement. It’s false and strips the beautiful walkways of their soul. For beautiful the medieval city is, with its perfectly preserved 52 peaked towers, basilica and stone wells.

In truth I believe, probably irrationally, that some coach excursions are cheating when it comes to sightseeing. There’s no effort involved. The fact that these ones had bypassed La Bastide revealed a lack of interest in actually experiencing Carcassonne. It’s tick list travel. 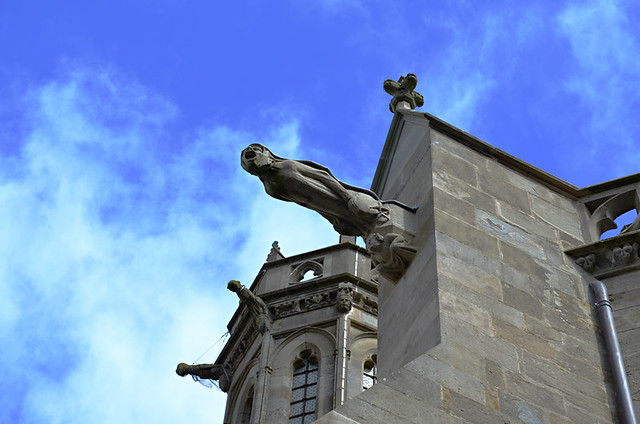 We felt the same in Dubrovnik; the sense that people were seeing a place rather than experiencing it. In situations like this there’s an urge to get it over with as quickly as possible to break free from the herded masses. In Carcassonne’s favour, most excursion groups stick to the main drag so it’s relatively easy to escape along side arteries. But the damage was done. It was claustrophobic and we wanted to breathe freely again.

We left the old city to be devoured by others and returned to La Bastide. Back in the new, old streets we revelled in feeling foreign again. It felt refreshing to be reminded how poor our French was as we purchased juicy oranges from Le Fruitier to eat on the way back to excursion-free Limoux. 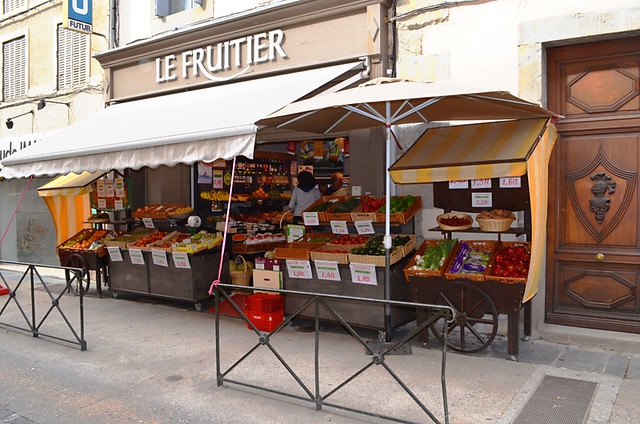 Carcassonne is a wonder to behold and deserves a visit. But as for staying there…

The Legend of Dame Carcas
The woman smiling down from the entrance to the medieval city is Dame Carcas, wife of the Saracen king, Ballak. When Ballak was killed in battle, his wife was left holding the fort as Emperor Charlemagne laid siege to the city. Five years later he still hadn’t manage to break down defences. Inside, Dame Carcas was running out of soldiers and food. But she was as wily as Cersei Lannister. She made model soldiers out of straw so that Charlemagne believed there was still a decent sized army within the walls.
Her greatest trick was to force feed the only remaining pig in the city with the last of the grain supplies. When the pig was swollen with the grain, she threw it from the ramparts. It hit the ground in front of Charlemagne and split open, spilling grain everywhere. When Charlemagne saw how full of food the pig was, he was fooled into thinking that Carcassonne still had supplies aplenty and abandoned his siege.