We turn our backs on the hilltop abbey of La Serra gazing out across the Mediterranean and, walking inland, we cross a dusty path and wander through sparse pine trees to reach a rocky outcrop where we scramble to the top and perch on a flat rock. Far below, on the distant coastline, the red tiled roofs of Calvi cluster behind their granite, citadel fortress, the endless shoreline lapped by the glittering Mediterranean. To the east, the trembling finger of Cap Corse resonates in the heat haze, extended like a geomorphic j’accuse! towards Genoa who ceded ownership of the island to France in the 18th century. In the foreground, standing proud above the Gulf of Calvi and the people who have taken her as their patron saint, is the shining figure of Notre-Dame de la Serra, carved from a rock pinnacle alongside the slender bell tower and pale walls of the abbey. 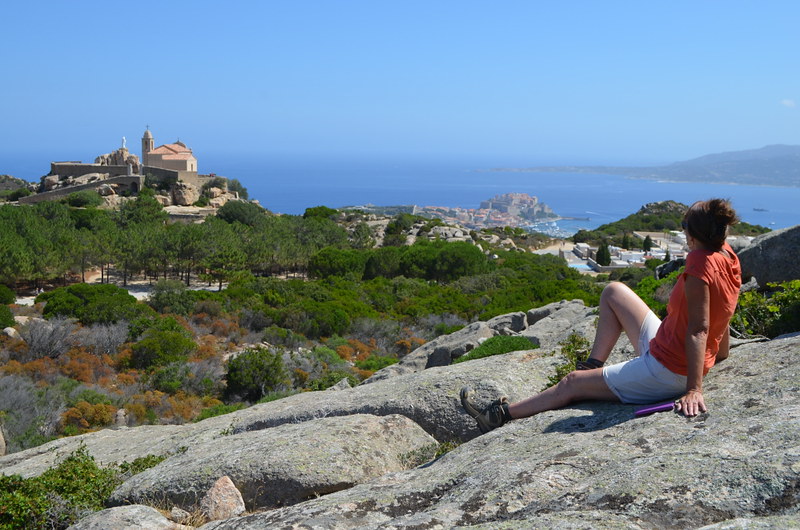 Small groups of people are milling around the abbey, most having arrived by car, few making the journey on foot along an ancient muleteer path lined by olive groves, as we have done. But over here on our rocky grandstand, there’s only us, the warm sun on our backs, the gentle breeze on our faces, and at our feet, the north west coast of Corsica.

The largest tourist centre in north west Corsica, Calvi is a bustling, seductive blend of biscuit coloured, stone houses; narrow, cobbled alleys lined by pavement cafés and chic bars with garden courtyards; and aromatic delicatessen shops packed to their wooden beams in savoury salami, pungent cheeses and dried mushrooms. It’s also the destination of choice for cruise liners who moor in the gulf, and for yachts and super yachts who line the marina, brandishing their opulence to wide-eyed tourists strolling the promenade. The bars and restaurants that line the sea front are a magnet for day visitors, their tables ebbing and flowing throughout the day. Behind the marina, the charismatic Rue Clemenceau also attracts visitors to its boutiques and artisan shops but its menu prices are more competitive and it’s a compelling place to spend time browsing or sitting at one of the restaurants, watching the tide of people who wash by.

Above the town sits its imposing citadel, built by the Genoese in the 13th century. Home to a garrison of the French Foreign Legion and one of the many claimed birthplaces of Columbus, its walled streets are a fascinating maze of crumbling churches and palaces, a Baroque cathedral, and a handful of bijou restaurants with panoramic terraces. Amazingly, other than tour groups, few visitors bother to climb its ramparts, preferring to spend their time in the bustling streets below and leaving it remarkably crowd free.

Descending from Notre-Dame de la Serra, we detour to the splendid, expanse of La Plage de la Pinède which runs eastwards for 5km from the town. Considered one of the most beautiful beaches on Corsica, its fine vanilla sand stretches around the bay, backed by the sandy tracks of the ‘little train’ that follows the coastline to L’Île Rousse. 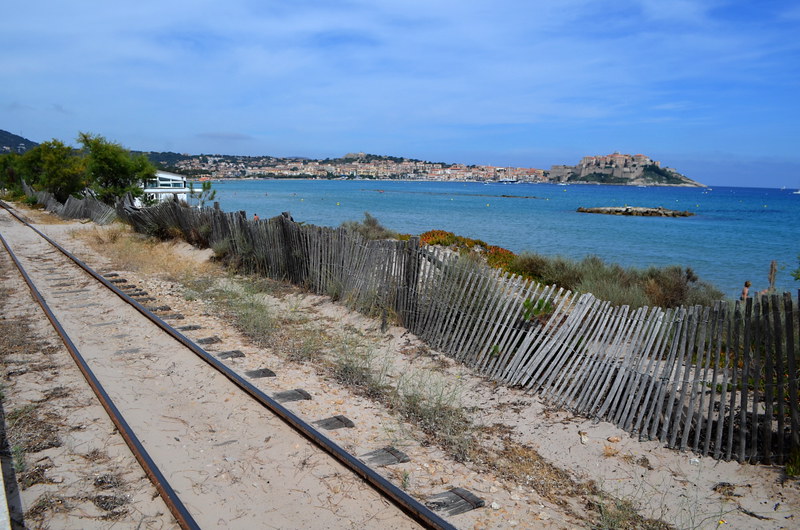 Leaving the busy streets of the town, we head out to the beach and then divert from the sand, cross the railway line, and head out along the boardwalk that runs parallel around the bay. To our left is the single track railway line, its rails completely covered in sand, brown grass growing between its tracks, as if long abandoned and given over to nature to reclaim. Yet as we walk, a train trundles towards us, travelling barely faster than we are walking, its occupants gazing out the windows at the warm white sand that will soon be enveloping their toes.

At regular intervals, small crossings are placed over the lines at the rear access to beach cafés and restaurants, forming a bridge between the boardwalk and the beach. At each one, a gate or an archway announces the establishment, and their design ranges from chic and trendy to simple and rustic depending on the prices of the menus beside them.

On the other side of the boardwalk, forming a visual and sound barrier between us and road, is a fragrant forest of eucalyptus and 100 yr old pine trees. As we walk, a handful of strollers and joggers accompany us, their numbers dwindling the further along the boardwalk we progress until, by the time we reach the campsite at its furthest edge where we turn around and retrace our steps, we are once more all alone.

The following day we follow the coastal path westwards around the Gulf of Revellata to reach the pretty Plage De L’Alga. Bereft of regimented rows of sun loungers for hire, this small, sandy cove is popular with those who prefer their beaches a little less groomed and more in keeping with the maquis scented cliffs that rise behind it. Continuing along the Sentier de Revellata, we trace the contours of the coast all the way to the lighthouse on the tip of the headland from where we look back over the Gulf of Calvi and the distant town topped by its citadel. This evening we’ll join the ranks of visitors strolling the promenade alongside the yachts and enjoying a cocktail as the sun dips below the horizon before choosing a table at one of the restaurants along Rue Clemenceau.

But for now, we’re happy to enjoy another side to Calvi, one that most visitors will probably never see.

We flew to Corsica via Nice from where we picked up a connection to Bastia with Air Corsica. We flew out of Calvi, again using Air Corsica and connecting to our return flight in Nice. We visited Corsica on behalf of Inntravel, the UK Slow holiday specialists, in order to put together their Contrasts of Corsica holiday which launches in spring 2017.