In September 2016 we helped put together a Slow Travel holiday package in Berchtesgaden in Bavaria for Inntravel. Initially the idea was to create a walking holiday. However, there were so many diverse ingredients in the mossy meadows and mountaintop plateaus that plans evolved and we ended up with a series of Slow Travel options. As a result, a wider audience than just walkers have been enjoying similar experiences to the ones which enchanted us whilst we walked, drove and gently chugged through the captivating Berchtesgaden landscape. 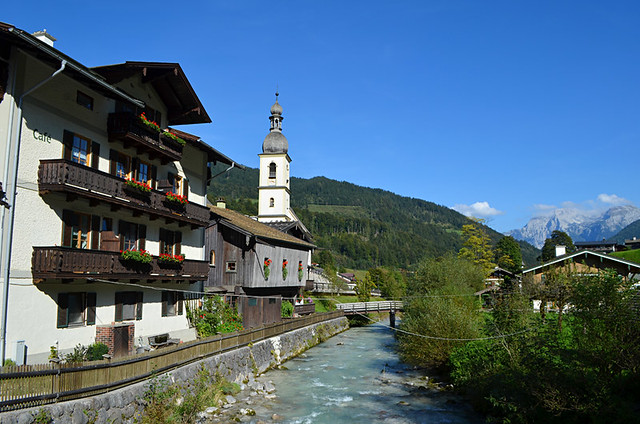 Although we often prefer to focus on smaller, specific aspects of areas we visit, there’s a danger the bigger picture might remain slightly out of focus. In Berchtesgaden’s case, Königssee might be a dream of a lake, but what else is nearby? The Eagle’s Nest is a highpoint, but once you’ve soared with the big birds what then?

As I mentioned, Berchtesgaden’s attraction as a destination is as a result of a series of ingredients. These are ten which would have us returning in a jiffy. 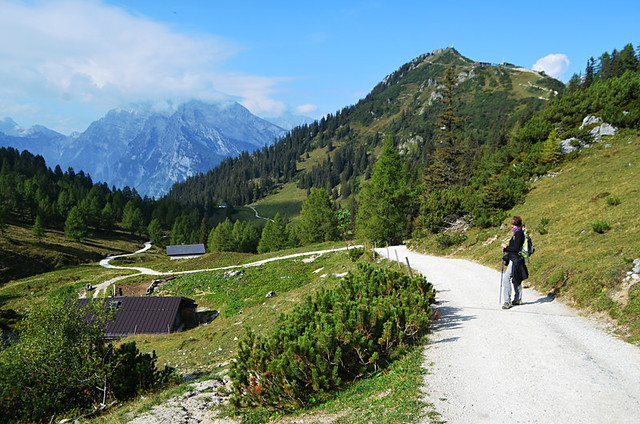 Berchtesgaden is an adventure park for walkers. Germany’s rural parts generally are signposted to death when it comes to walking routes, with colour coded grading so when you see a red dot on a signpost you either get excited about the challenge ahead, or avoid it like the plague. We climbed narrow forest trails; walked across mountain ridges and through high alms; strolled around lakes; caught cable cars to high peaks, and traversed valleys where wood smoke from small farms blended seamlessly with morning mists. Some of it was challenging (we walked with soldiers on manoeuvres at one point). And some of it, especially lakeside routes, involved little more than gentle and extremely pleasant strolling.

Immerse yourself in history 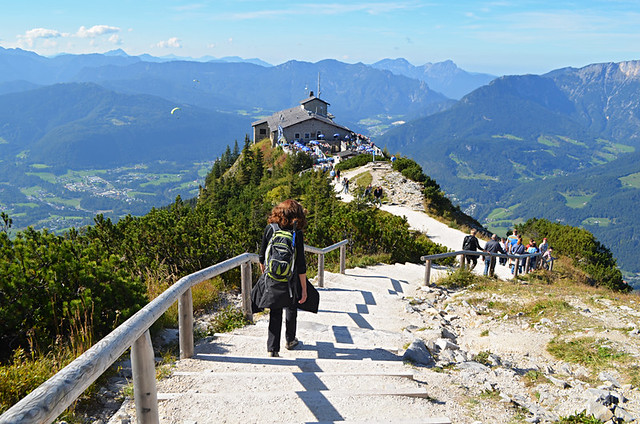 The author of an excellent article in the Guardian about the Inntravel walking holiday tried his best to tiptoe around Hitler’s connection with Berchtesgaden. But he was still accused online of doing that British thing of referencing the war whenever Germany is mentioned. As is so often the case, comments of this ilk revealed ignorance more than anything else. The area is a well documented Nazi stronghold, nobody pretends otherwise. It’s said Hitler planned his bid to takeover Europe from Berchtesgaden. The Kehlsteinhaus, one of its most popular attractions, only exists because it was a birthday present for Hitler. There are fascinating stories about events in the area during final days of World War II. Tales that deserve telling and which would make an edge-of-the-seat movie. To not mention Hitler or the war when writing about Berchtesgaden would be a bizarre thing to do. 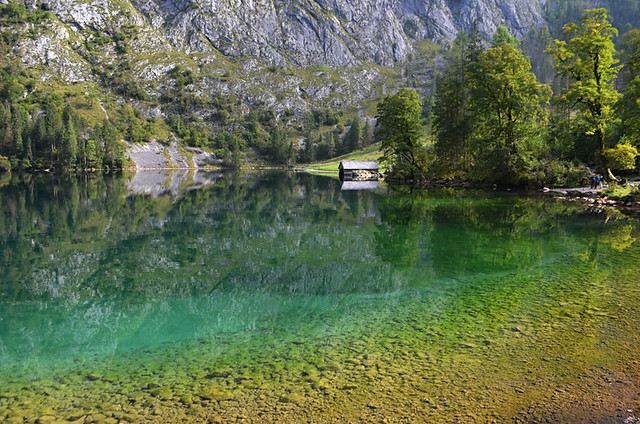 Königssee is one of the most beautiful lakes I’ve set eyes upon; gushing waterfalls, dramatic cliffs, electric boats gliding quietly across a mirror surface, an onion domed church on its bank – it is a lake of great beauty, fantastical tales, historic ballads and tragic accidents. Hidden Obersee, reached from Königssee’s southern edge, is even more magical. 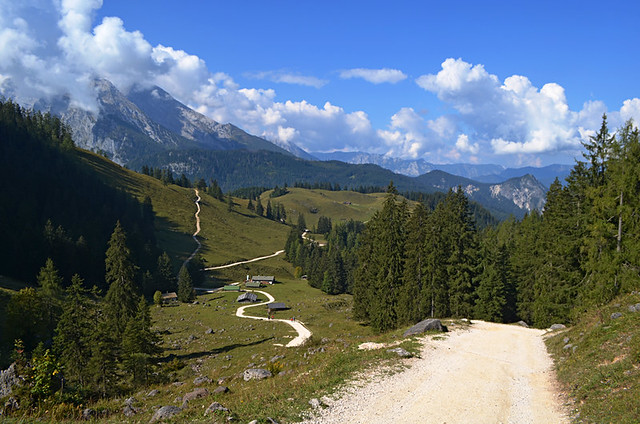 The Eagle’s Nest is Berchtesgaden’s most famous highpoint, but there’s also Watzman, Jenner and Predigstuhl, all of which reward with bird’s eye views of the surrounding scenery as far as Salzburg in Austria. The beauty is you don’t have to be an accomplished mountaineer to enjoy these epic views. Cable cars, including Germany’s oldest, make getting high an easy and pleasurable experience, unless you’ve got vertigo of course. 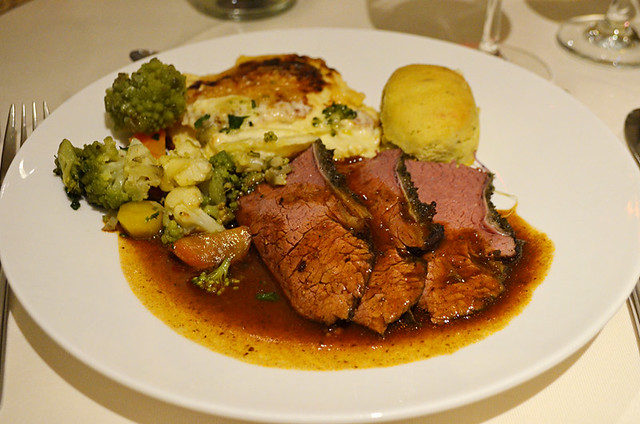 ‘Hearty fare’ is generally rolled out whenever German food is mentioned, because that’s exactly what you get. The cuisine is of the sort which has me leaning back in my chair post dinner, patting a satisfied rotund belly. Lunchtime snacks in mountain hüttes are generous enough to fill me for the rest of the day. Berchtesgaden was once a favourite hunting ground of German royalty. It remains a great destination for anyone who enjoys game. Wild boar and venison are regulars on menus, often served in a rich sauce and accompanied by red fruit sauces and dumplings, noodles, or potatoes. Lake fish is also very good and less likely to bust the belly.

For a mix of art and nature 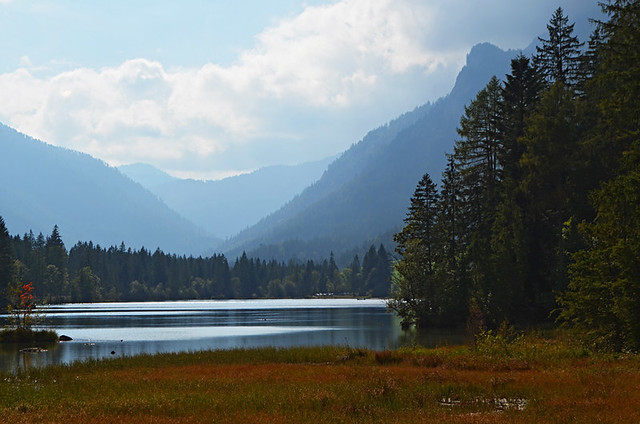 If you think it sounds an exaggerated cliche to describe Berchtesgaden as a magnet for artists, take a walk around Hintersee. The ethereal landscape attracted an army of artists in the 19th century who clearly felt compelled to go head to head with nature’s brush strokes. Easels around the lake remain as testament to their efforts. 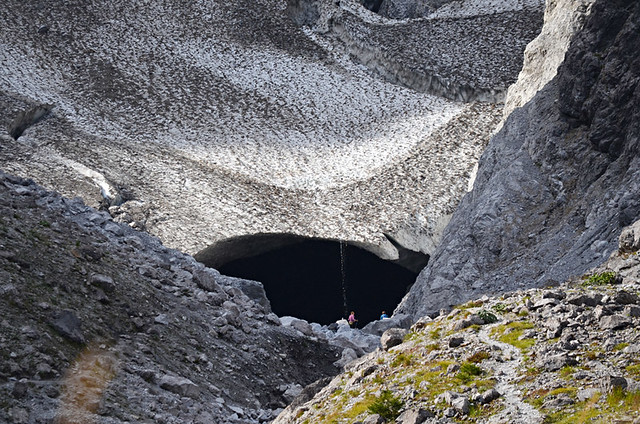 One of our favourite walks in the Berchtesgaden area was an ascent to the Blauieshütte, a lodge below the Blaueis (blue ice), the northernmost glacier in the Alps. Walking is the only way to get there so there aren’t the crowds you find at some of Berchtesgaden’s other attractions. Similarly, not many visitors make the effort to walk from St Bartholomä on Königssee to the Eiskappelle, a dome-like glacier at the foot of the Watzmann. Signs before the ‘Ice Chapel’ warn that to enter is to risk death, but plenty of adventurers (aka fools) ignore the warning. 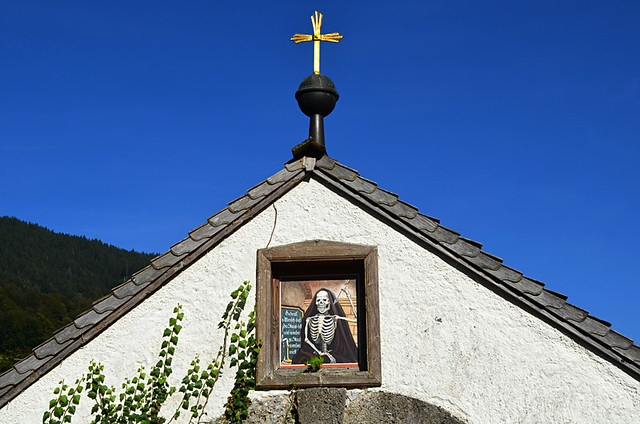 The cliff face rising from the Königssee which bounces back crisp, soulful music is an oddity which leaves visitors open-mouthed with amazement (it did us). There are other quirks which range from curious to macabre. The curious includes a gradierwerk in Ramsau. This is a construction made from blackthorn twigs; brine trickles through the twigs creating a fine salty mist, the inhalation of which is beneficial to the health. The macabre includes the grim reaper grinning down from cemetery gates.

There’s a kind of magic 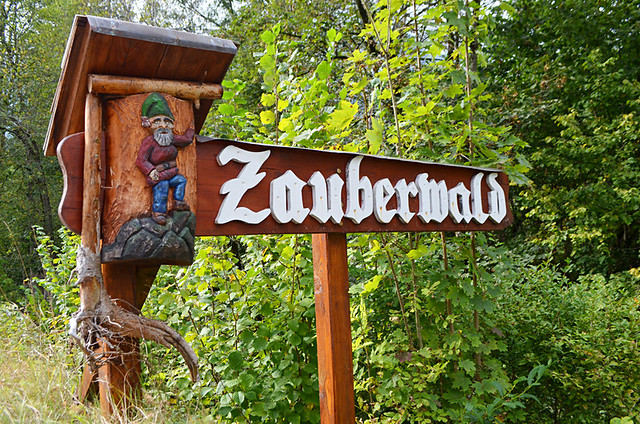 Enter a German forest and you often find yourself stepping into a fairytale world. In Berchtesgaden one route passes a dwarves’ bar and a wishing throne. It is actually known as ‘Zauberwald’, the enchanted forest. 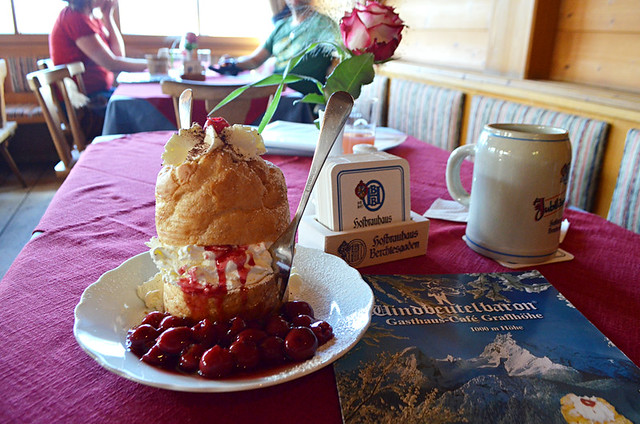 Nearly everyone knows about the sinfully delicious German tradition of kaffee und kuchen. I’m not even a cake lover, but I find myself being drawn to a wedge of something sweet and creamy whenever we pass a hütte in Germany during mid afternoon. Windbeutelbaron en route to the Eagle’s Nest shoved a kuchen in front of us which made all others seem like minnows. Their cakes are based on the nearby Watzman mountains and must be close to being life-sized.

These are only snapshots. If I listed all the things we liked about Berchtesgaden I’d end up with a weighty tome. Among Brits, Germany beyond its cities still doesn’t elicit the same sort of enthusiastic interest as many other European destinations. Not so long ago we felt the same lack of interest. Following numerous visits over the last few years the scales have well and truly fallen from our eyes. Germany was a revelation with far more to offer travellers than we realised. It’s time to wake up and smell that kaffee.