It was enough to make them stop walking and look back at me, their expressions clearly waiting for the punch line.
“Listen!”
The minute I said it, the music stopped. Then it started again.
“It’s coming from the riding stables,” they said.

It wasn’t. It was most definitely coming from the bush. By this time I was beginning to contemplate looking around for a large stone and carving out all the things I think people should do, or not do, to make the world a better place. If I was a devout Canario, this bush would now be certified as ‘miraculous’ and an annual pilgrimage would be arranged to honour it. 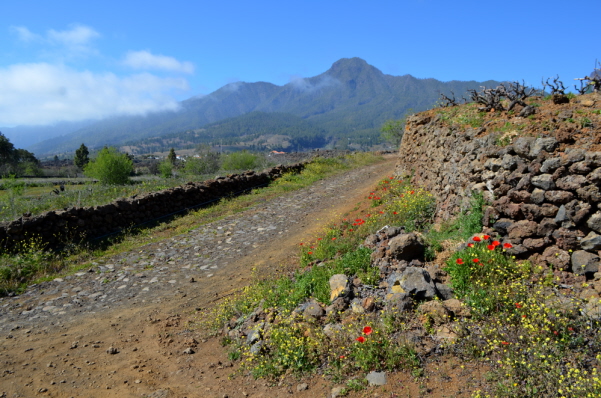 Then I spotted something on the ground, hidden amongst the undergrowth. It was a Union Jack and it was emblazoned on a mobile phone that was belting out Latino music from beneath a large euphorbia on the Canary Island of La Palma. I may involuntarily have squealed with triumph as I held the phone above my head with a self-satisfied smirk.

The phone began to ring again and James answered the call. There was a delay, presumably while the caller absorbed the shock of this unexpected turn of events. Location details were exchanged and a couple of minutes later the phone’s owner showed up. He and his companion had been driving around, constantly calling the number, to try to locate the lost phone. It was a smart plan. Whether or not it would ever have led them to the singing bush is debatable but anyway, we speeded the process along.

Another miracle bites the dust.

Walking the Monmouthshire and Brecon Canal

The towpath becomes less manicured where nature has snatched back land lost to relatively small-scale industrialisation. Ferns crowd the chocolate-coloured water; there are more ducks and moorhen than boats; many of the old bridges spanning the canal are overgrown to the point of being impossible to cross; and the leafy forest canopy closes in above… […]