How can it still be morning? Sipping fresh orange juice over breakfast in the courtyard of Kira’s Hotel in Mindelo on Sao Vicente already seems a long, long time ago. In between has been a ferry ride linking Sao Vicente to Santo Antao, a bumpy mini bus journey along a cobbled road and a short stop at a strange little forest made up of trees that don’t belong together. 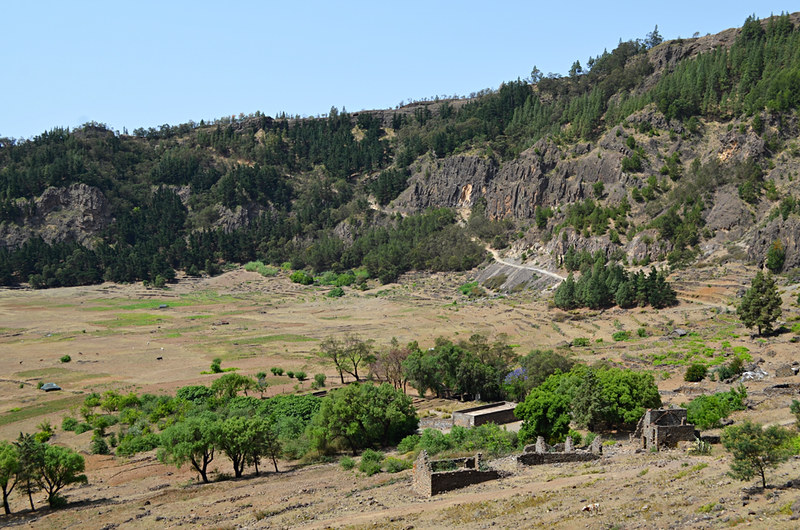 Now we’re standing in the flat basin of a volcanic crater providing a couple of cows with their day’s entertainment. And it’s still quite early in the morning.

Hetty, our guide, indicates it’s time to set off. She speaks English with a distinctive Dutch twang. Although Cape Verdean, she spent much of her youth in the Netherlands, something that’s not that unusual amongst Cape Verdeans it seems.

As we climb a neat path leading us from the Cova de Paul crater floor to the ragged rim which forms an almost perfect circle around neat little fields I notice green peppers apparently growing wild beside the path. I mention them to Hetty.

“Oh, they were planted by the Portuguese,” she replies. “We don’t use them.”

It’s as though their Portuguese heritage has somehow tainted them. 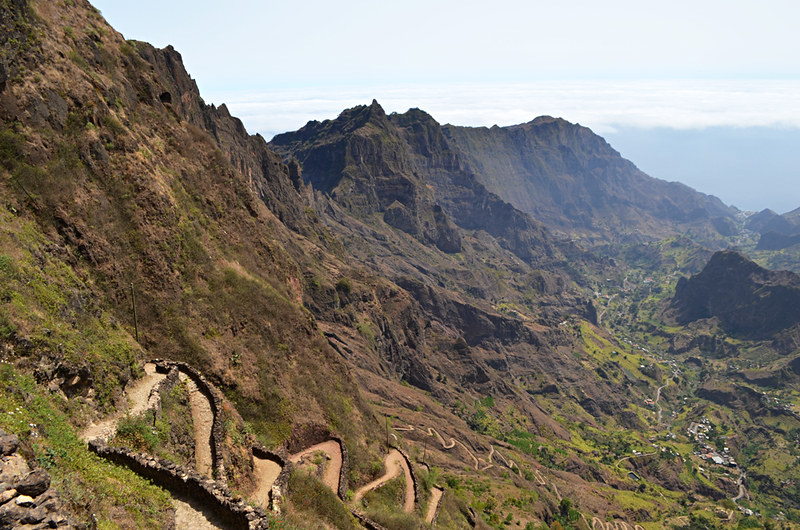 Even though it’s early-ish morning the heat combined with the ascent brings on a sweat. It’s not a long ascent, but it gets the heart pumping… but nowhere near as much as the sight which unfolds as we reach the ridge.

Below us, way below us, is a deep, wide scar in the earth. Running through its centre is a lime green, fertile strip; a veritable oasis of agricultural activity which separates walls of hard, jagged peaks. The line of the Ribeira do Paul.

It feels like we’re overlooking a lost world. A fanciful notion of course, but there’s no shifting the sense of adventure from my imagination. 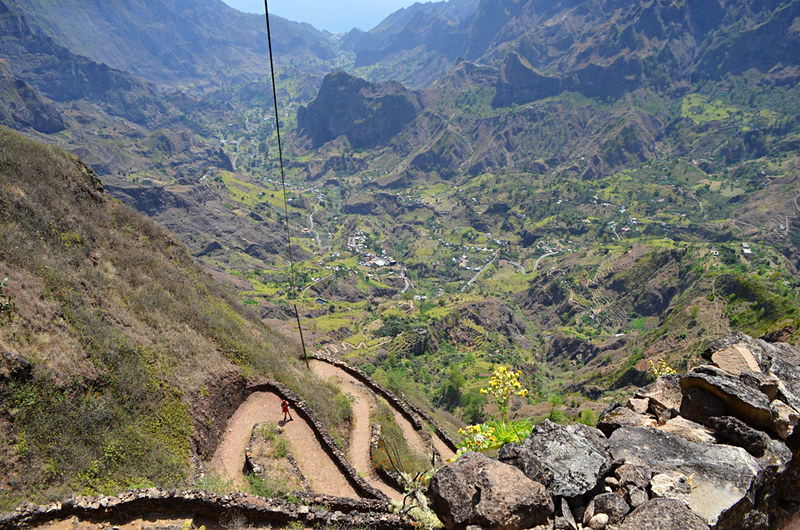 Linking our position with the green band is a snake of a path. It’s well maintained but a lot steeper than it looks from above. Any appreciation of the scenery requires lots of brief stops.

As we get closer to the valley floor, the green band takes on more definition. Spiky agave plants give way to stepped terraces of sugar cane and pockets of banana plants surrounding thatched huts. 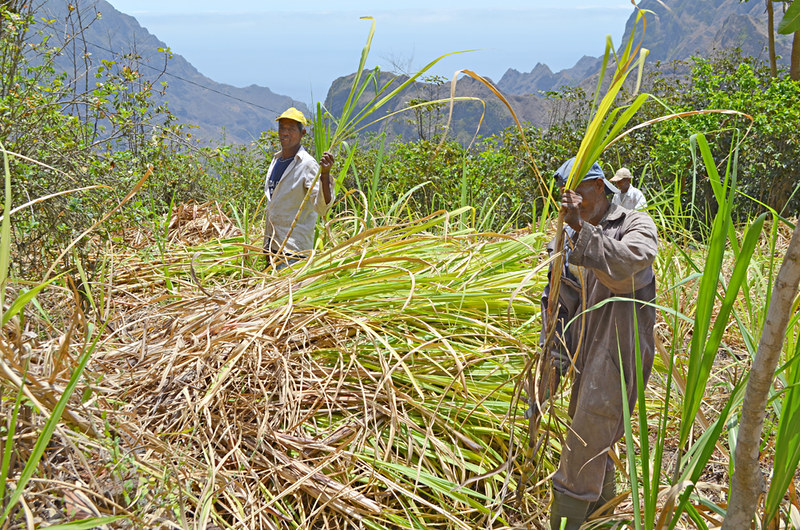 Human life enters the fray as we draw level with a gang of men hacking away at fields of cane. Hetty shouts a greeting and they smile and wave as we pass.

Shortly afterwards we reach the welcome shade of some trees, the first shade we’ve enjoyed since our route began. A woman and a young girl sit on a stone wall, between them is a basket filled with juicy tomatoes and bags of beans, possibly coffee beans. Hetty talks to her for a moment before buying a couple of bags of something in solid, creamy chunks. She passes us one.
I pop an unidentified chunk into my mouth where it melts, sending its flavours on a wild dance across my tongue. I barely suppress a gasp of surprised pleasure. Its flavour is familiar, the heroin of the sweet world. I’ve no idea what its Cape Verdean name is, but I know it as tablet. 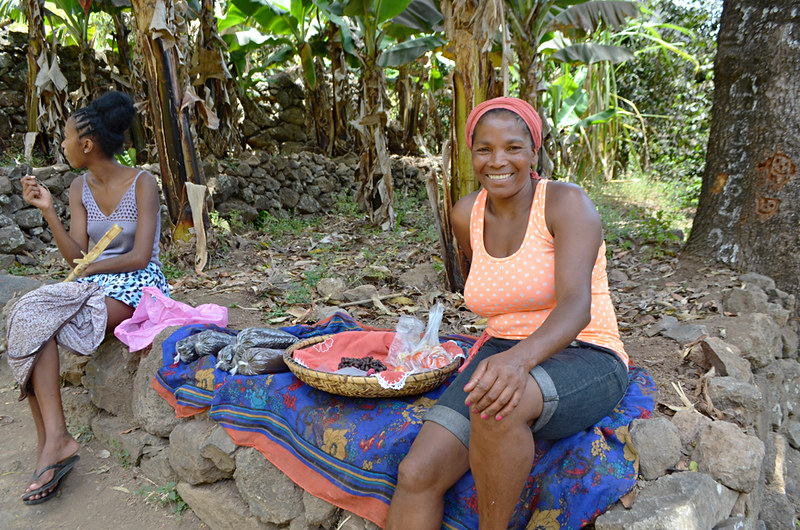 We continue descending on the neat path, passing trees and terraces which yield papaya,oranges, yams, avocado, peas and aubergine. Nature seems to be in a bountiful mood in this Garden of Eden of a valley.

Lunchtime coincides with our arrival at a small hamlet. A few men with dreads and Bob Marley tee-shirts lounge by the roadside, taking time out from work during the hottest part of the day. A woman shows us into a small, simply decorated living room where the three of us are left to enjoy a lip-smacking lunch of cachupa (the staple dish of Cape Verde) and mini doughnuts with coconut flakes. It beats the hell out of the ham and cheese baguettes you normally end up with in walking picnics.

From here our onward journey is by road, passing through small villages. At one point Nelson Mandela looks down sagely from his prominent position on the side of a house. 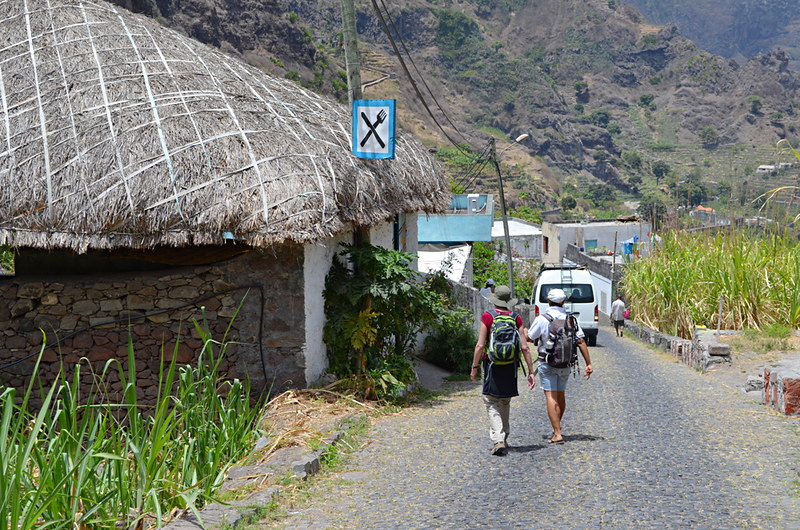 A blue sign with a crossed knife and fork looks quite incongruous as it’s attached to a telegraph pole which pierces the thatched roof of a large stone building. There’s no mistaking its message.

Bar O Curral belongs to German couple Alfred and Christine Mandl who have completely embraced the Cape Verdean way of life in the Paul Valley. Inside, long tables are laid out for a walking group. Hanging from a tree are bags of herbs and spices. Bottles of grogue (the local brandy made from sugar cane) fill wooden trays whilst wicker bowls brim with cheeses. All are home produced. Even though we’ve eaten, the aroma from the kitchen has us yearning to sit at one of the benches to enjoy the feast that awaits the walking group. 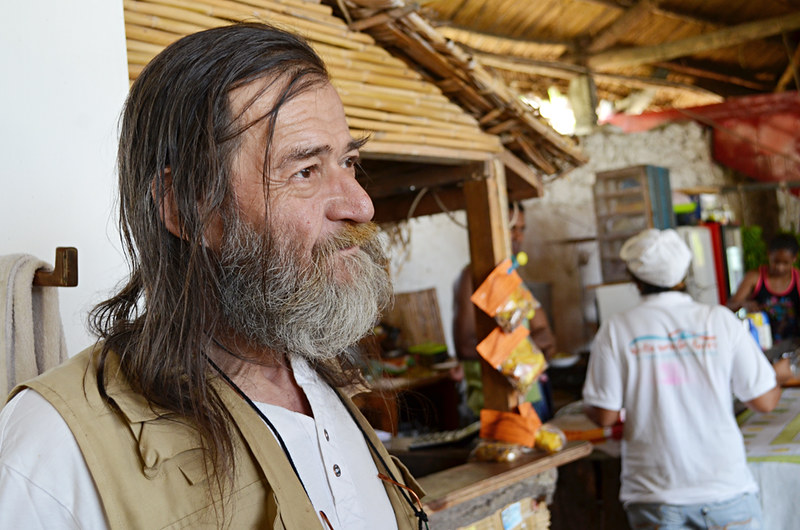 It’s a simple place and all the more alluring for it. Part of me wishes our journey would end here. I can imagine us settling down at one of the tables with a bottle of grogue to while away the afternoon gazing over the wonderful world Alfred and Christine have nurtured. 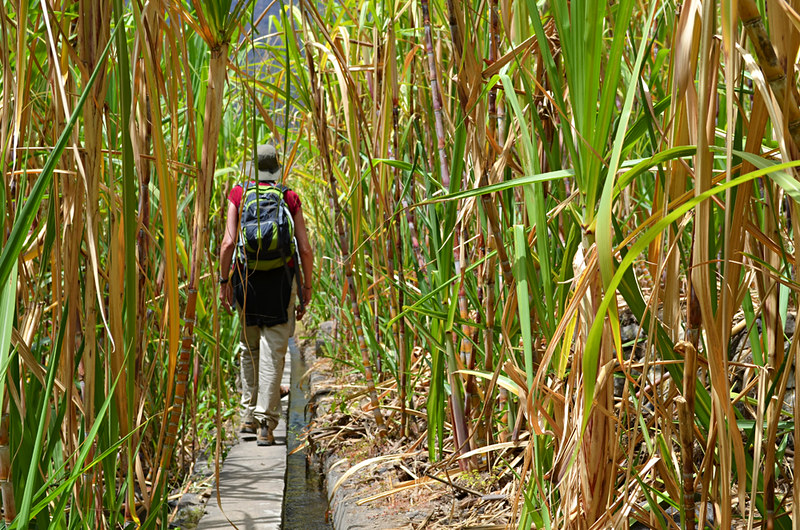 But it doesn’t, we have to move on. Almost immediately Hetty announces she’s bored with road walking and asks if we’d like a little adventure. We follow her off road where our path becomes a levada (irrigation channel) which cuts through the cane, taking us along one side of the valley. Hetty checks if we’re okay traversing a narrow water channel above the valley floor. We’re fine, we’re old hands at walking on goat trails in the Canary Islands. And anyway, it does feel more like an adventure again. 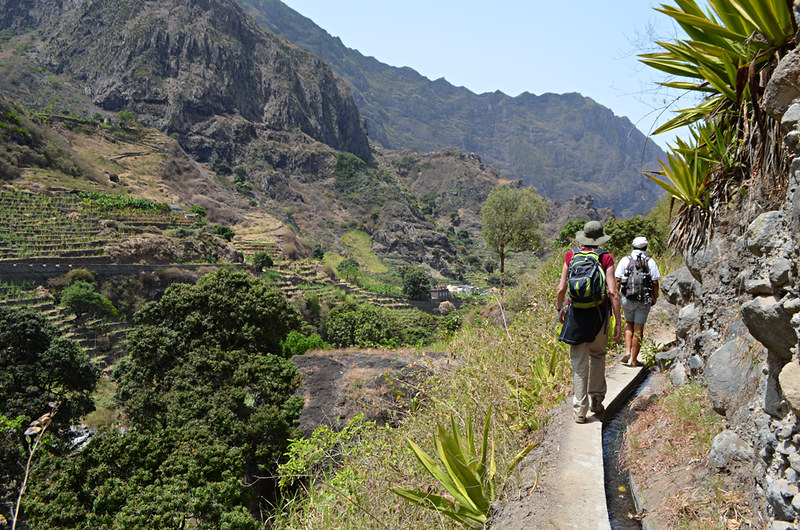 The levada drops us at the start of a cobbled path, the final leg of our journey to Casa das Ilhas where we’ll spend the next couple of nights. It’s a fifteen minute walk. No cars can travel this path, luggage arrives and departs on the heads of local porters.

We leave Hetty at the entrance to Casa das Ilhas, check in, grab a couple of beers from an honesty bar and plonk ourselves down on a couple of chairs on a small terrace outside our room. The accommodation is on the basic side, but the rural hotel does have one outstanding feature. Laid out in front of us is the rest of the Paul Valley, the aromatic smoke from tiny grogue distilleries hanging in the air above the lush landscape. It’s a glorious view. 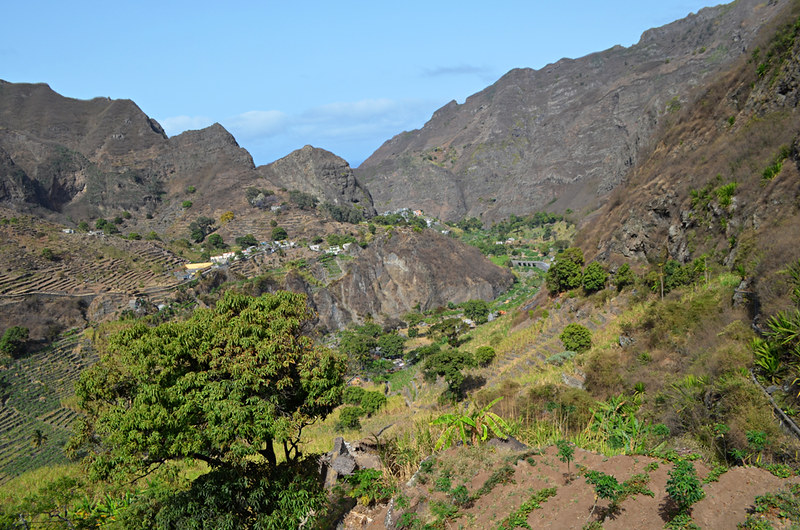 This has been a good walk, one of the very best in fact.